The Malton and Norton Rotary Club War Memorial Project lists the casualties of the two world wars combined with a project to restore one of the six war memorials in the three towns. 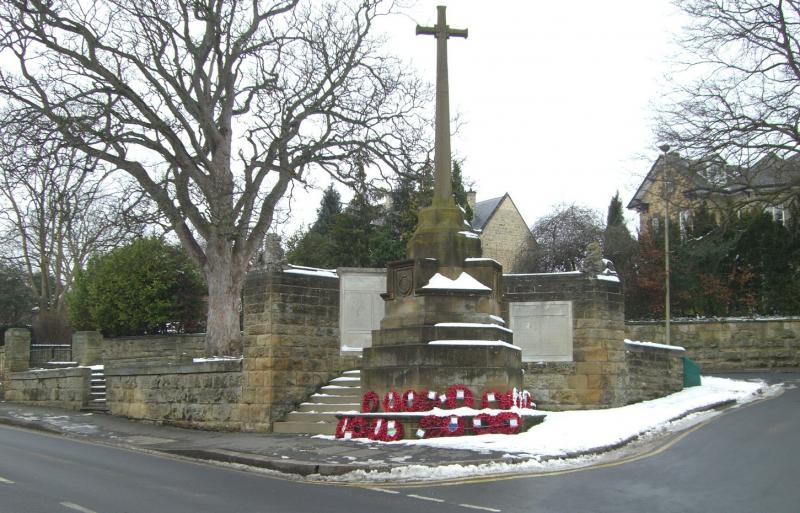 First: To involve the local schools, societies and community in all aspects of this project.

Second: The cleaning and restoration of the Malton War Memorial on Horsemarket Road,to make it accessible for the disabled and safer for those attending services on Remembrance Day.

Third: To provide digital access to the Memorial Book at St Peter's Church by using the Europeana Community website.

Fourth To erect a new plaque  dedicated in remembrance of Malton men who died in WW1, WW2 and recent conflicts who are not recorded on the memorial. 16th September  2018

Fifth:To trace families of the fallen in the three towns by using the Commonwealth War Graves Commission site, local media records, census records and documents, letters and photos from the local community.

On Sunday 16th September 2018 the Memorial was re-dedicated by Sir Philip and Lady Isabella Naylor-Leyland on completion of the restoration of the memorial and dedication of a New Plaque to the memory of fourteen Malton men who died in all wars between 1914 and 1947.

'Malton Goes to War' is a history of the men and women commemorated on the Malton War Memorial. Written by John Howard, who co-produced this site -ISBN 978-1-98199263

If you can add details to this project please complete the contact form below.

The Malton and Norton Rotary Club  War Memorial Project and details of the fallen.

As part of the project, the names of many of the fallen on the memorial have been recorded and their details traced using the Commonwealth War Graves Commission, Census returns and other data bases. There are over one hundred names in all and these appear below together with details taken from the CWG certificate.  There are at least six other memorials in the three towns and it is becoming evident that the final numbers of fallen will be far greater than first believed. If you can provide further details  that can be added to this roll please contact Colin Jennings at minesagrouse@gmail.com   or use the form at the bottom of this page

The Norton on Derwent War Memorial

The Norton on Derwent War Memorial is in the form of hand printed manuscript book that is lodged in the War Memorial chapel in the Church of St Peter's, Langton Road, Norton.  There are twenty five pages each page listing the names of five fallen Norton residents. With the permission of the Church Council, the book was transported by Rotary to the British Library, Boston Spa, where it was digitized and placed on the Europeana 1914-18 web site. Research in to the names has just begun and details of their service record and family homes  will then be shown on this page. To vew the book online go to

(The entries below may be distorted due to changes with our web provider.

These will be updated a.s.a.p.)

Son of Mr. and Mrs. William Bowes, of Hovingham, York.

Son of William and Maria Trenham Boyes, of 13, Castlegate, Malton .

Son of Thomas and Anne Coates, of .

Chailak Derne Cemetery, No 2, located about 1.75 miles NW of Anzac Cove at Gallipoli.

Member of the Anzac Forces-  age 26

Youngest son of Thomas and Ellen Dresser, of  Stamford Bridge,

(The name E Ellis appears only once on the Malton Memorial,

but both men named below were from Malton)

Son of Mr. and Mrs. Edmund Halliday, of 66, Newbiggin, Malton.

(Brother of James and Robert Harrison)

(Brother of George and Robert)

(Brother of James and George)

Served at Arncliffe Hospital, Malton and the Colchester Military Hospital

Daughter of Jane and Henry Hornsey 40 The Market Place, Malton

Not recorded on CWG site

Son of John and Mary Johnson of Row,

Son of Robert and Elizabeth Johnston, of Mearns, nr. Glasgow .

Son of William and Priscilla Kirby of Malton

Son of Charles and Mary Lapish, of Malton, York.

Son of George and Mary A. Ludlam, of 21, Market Place, Malton.

Son of Emma (nee Kitchen) and the late John Mason, of 12 Cemetery Road,

Son of Charles and Alice Piercy, of  Malton.

Husband of Ada Postill of Hovingham

Son of Hebden and Emma Shaw, of 94 Castlegate, Malton, Yorks.

Son of Lancelot and Jane Smith, of  Old Malton, Malton, .

Prince of Wales Own Regiment

Husband of Frances Sollitt and son of William Blake Sollitt

Son of Fredrick and Jane Stephenson, of  Hillsborough, .

Son of John and Alice Thompson of  Old Malton. Son of John Edward and Lily Bowles, of Malton, .

In Memory of Corporal

Son of Frederick and Jennie Cole, of Malton, .

In Memory of Leading Aircraftman

In Memory of Pilot Officer

In Memory of Flying Officer

Son of Oswald and Mabel Leefe, of Malton, .

Husband of  May Lotherington, of Malton.

Not traced on CWGC site

In Memory of Sergeant

Son of J. A. and Elizabeth Ann Stancliffe, of Norton, Malton, .

In Memory of Wing Commander

Son of  Cecil and Jessie Walker, of Woodlands, Malton, .

Son of Albert and Kate Taylor, of Malton, .

Not positively identified on CWG Site

Comment: Hello, Walter Lightfoot RN, served as recorded on HMS Lynx, however before dying on the HMS Lynx that hit a mine when returning for repairs in Scotland, where Walter died (which is a protected war grave), his ship had chased off the Germans who had bombed Scarborough. I have his service history, and the destroyer maps showing HMS Lynx in lead pursuit. An interesting footnote.

Comment: George William Sollitt was my Uncle. His parents were my great-great grandparents. His brother Alfred Sollitt was my great grandfather. I've no other information other than I have researched his naval records. I can send these by email if you are interested,Thank you for maintaining the memorial.

Comment: Hello, Re Ernest Wardell, I have the scroll commemorating his death which was sent to his wife, my great Aunt. Did you find any photographs of him? With thanks, Kim

more Details of those members of the armed forces in WWI and WWII who are buried in New Malton, Norton on Derwent and Old Malton cemeteries