Some of over 300 participants 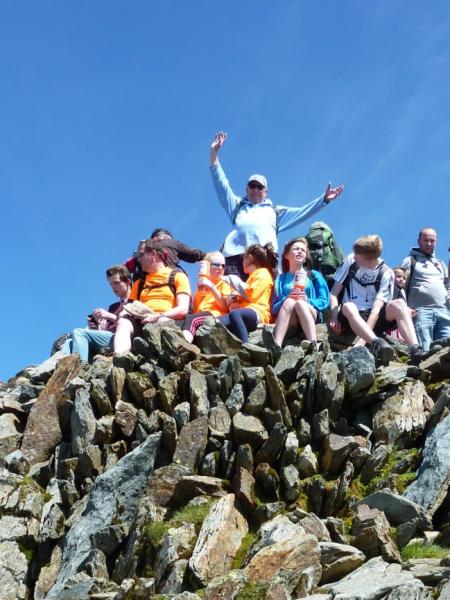 A Big Thank You to all of you who sponsored Graham's climb on 17 May 2014.  The Snowdon 500 Challenge is organised by friends of the Prostate Cancer Research Centre and this year's climb was joined by more than 300 people in glorious weather.

Climbing the Pyg Track from Pen Y Pass to the summit took Graham almost four hours, making it just in time to meet his wife, Cath, with only a 30 minute slot until her return train.  The journey down seemed much longer as the aches and pains set in, arriving in Llanberis in just over three hours, a total of nearly eight hours on the mountain.

On the way, he met many like minded people, all determined to experience the thrill of getting to the summit of the highest mountain in England and Wales, in aid of chosen charities.  The views were magnificent, well worth the effort, and through generous sponsors, East Cliff Rotary raised about £1800 to be shared between the Prostate Cancer Research Centre and our other 2013-14 good causes.

Snowdon500 was created in 2007 by Matt Rannamets who had been diagnosed with prostate cancer but was determined not to be beaten, and he has hosted the event since then, with hundreds of people taking the challenge.  This year's event was supported by Rebecca Stevens, the first woman to climb Mount Everest, on the exact same date in 1993.  In the evening, Rebecca gave a fascinating presentation, having taken part in the challenge during the day.  She said: "Snowdon 500 is just the perfect example of what can be achieved when one person has a clear vision.  Matt wasn't to be defeated by prostate cancer, and last week succeeded with raising the £1 million target for the Prostate Cancer Research Centre."

more Servery not self at the Salvation Army BH1 Project

Air and a Prayer Rally

more Air and a Prayer Rally by Rtn Andrew Dawson

more Bournemouth East Cliff Rotary Club helped sponsor this event at Waterman's Park, Somerford along with many others to provide a most enjoyable day for local families.