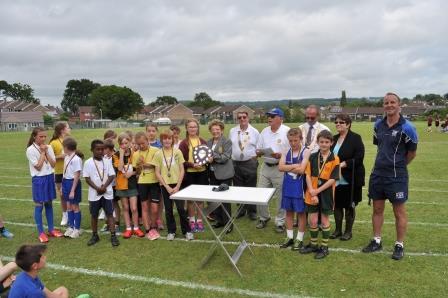 UNFORTUNATELY, WEATHER CONDITIONS FORCED US TO CANCEL THE 2016  QUADKIDS EVENT SO WE HAVE LEFT THE FOLLOWING REPORT, WHICH RELATES TO THE 2015 EVENT ON THE WEBSITE.

140 local Primary schoolchildren enjoyed an afternoon of competition and fun on Holyrood School playing fields in June as they took part in the annual Chard Rotary Club QuadKids Competition.

The event, which has been running for 5 years has gone from strength to strength and this year saw 13 primary schools from the local area involved. Children competed in their year groups (Years 4, 5 and 6) and every competitor gained points for their performance in each of the events. These were added together to give an overall score for their school.

The first 3 girls and first 3 boys in each year group received a medal from Rotary District Governor Judy Barnard - Jones and were also congratulated by tne new Mayor of Chard Councillor Dave Bulmer. Every child who took part received a certificate giving their total score in the competition. 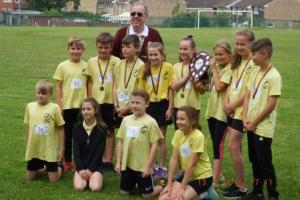 more This year's event will take place on the afternoon of Wednesday 17th June. 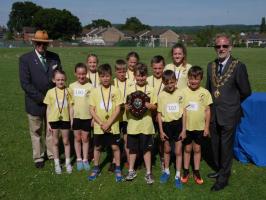