Reports on Speakers at Club Meetings and Events 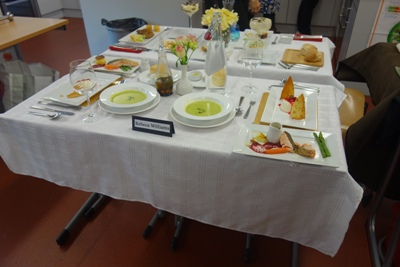 Llandeilo Rotary were represented by Rebeca Williams from Ysgol Bro Dinefwr. Rebeca had previousy won the Area1 Young Chef competition and was representing the Area in the District Final . Unfortunately, Rebeca was unsuccessful in the District competition but did get a mention from the judges as regards  her fondant potatoes

Details of Rebeca's meal is given below:-

The pictures above show Rebeca's eye watering food , Rebeca with her teacher Doreen Martin who puts a lot of effort in getting the best out of her students for this competition . One of the pictures shows Rebeca receiving her certificate for participating in the District competition

Following dinner the evening started with a raffle that raised £114 for Wales Air Ambulance. The club then welcomed Rotarian Dilwyn Williams who returned after a period of illness. Dilwyn then presented two plaques to Club President Rob Donaldson and to Past President Richard Hughes who had visited Dilwyn at home and at Glangwili Hospital during his illness.In return President Rob presented an Honorary Membership plaque to Dilwyn from the club.
It was then the turn of guest speaker Andy Gray who gave a courageous and down to earth account of his serious traffic accident that occurred on 22nd July, 2016
when Andy was returning home from Llandeilo Andy recalled that he had no recollection of the accident but paid particular tributes to a passing couple who provided both comfort and First Aid prior to the Emergency Services arrival. The Wales Air Ambulance transported Andy to Morrison Hospital where he remained in a coma for a week and in a critical position with multiple injuries.Following his recovery Andy made a special visit to the new HQ of Wales Air Ambulance in Llanelli to thank the staff.
There were a number of questions and Rotarian Alun Davies gave the audience some facts about Wales Air Ambulance that costs some £8 Million per annum to operate and in 2016 received 2,500 calls to its centres.
Past President David Owen ended the evening with the vote of thanks.
PHOTO-Left to right Past President Richard Hughes, Rotarian Dilwyn Williams and President Rob Donaldson
PHOTO- Left to right President Rob Donaldson, Past President Richard Hughes, Speaker Andy Gray and Rotarian Alun Davies

St David's Day was celebrated early by Llandeilo Rotary Club when Rotarians, their wives, Ladies of Inner Wheel and guests met at the White Hart Inn on Friday, 24th February.

Following a traditional dinner of cockles and laverbread and Welsh lamb the Mayor of Llandeilo Fawr Councillor Colin Jenkins was inducted as a Rotarian by President Rob Donaldson. Now as a Rotarian Colin Jenkins was invited to speak and chose to outline a brief history of the office of Mayor.As a special priviledge
Colin brought the original Council Chain dating from 1895 up to 1974 when there was a change in the council. Colin remarked that some chairmen then did a 5 year term of office.Wearing the current chain of office Colin informed his audience that there are two wards in Llandeilo Fawr, Tywi and Castle wards and there are 6 councilors, two for each ward. The Mayor is elected by members of the council and councilors meet twice a month with the Mayor's inaugeration taking place every May. Colin also remarked that the town council are shortly to take responsibility for two parks in the town, Penlan Park and Parc le Conquet following the County Council's rationalisation programme.
Apart from holding the title of Mayor, Colin is a sales representative for a catering company covering west and mid Wales and is a part time firefighter.
One of the guests of the club was Deputy Mayor Councillor Eifion Davies.
PHOTO-Left to right Deputy Mayor Councillor Eifion Davies, Rotary President Rob Donaldson and Mayor Councillor Colin Jenkins. 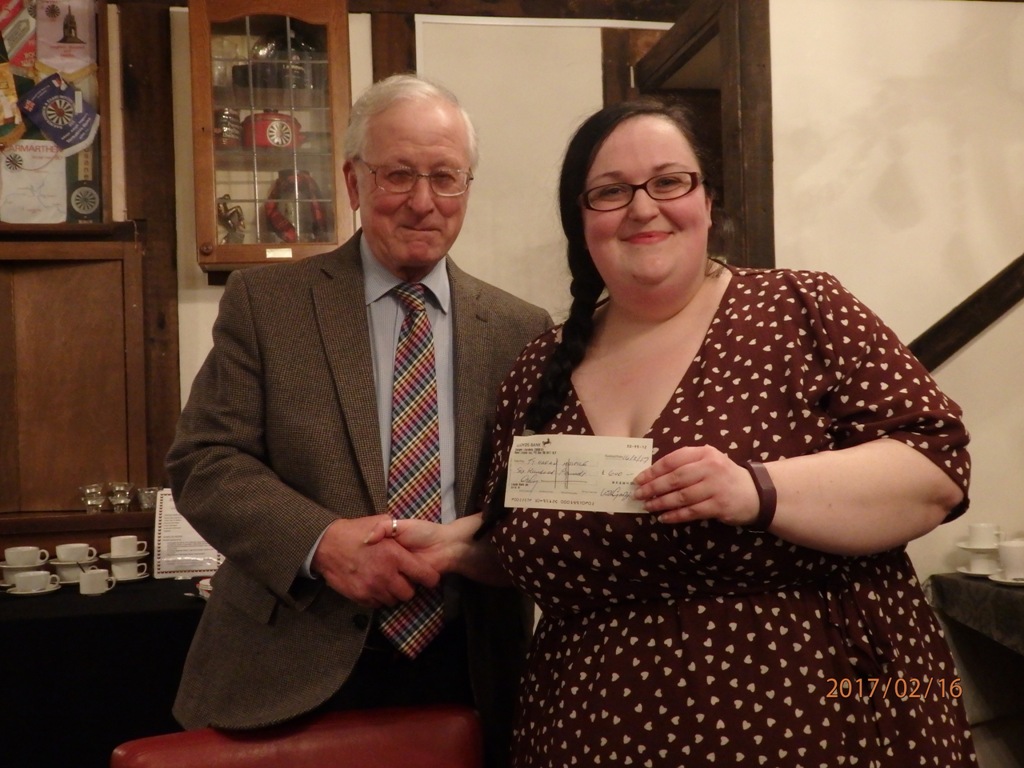 On Thursday,16th February Llandeilo Rotary Club welcomed guest speaker Shelley Kirkham the Regional Fund raising manager for Ty Hafan Children's Hospice.
Shelley who resides in Cydweli covers the counties of Carmarthenshire, Pembrokeshire and Ceredigion for Ty Hafan. She was invited to the club to speak by Immediate Past President Ken Griffiths as Ty Hafan was one of Ken's chosen charities during his year as President 2015/16.
Ken presented Shelley with a cheque for £600 following which Shelley gave a brief history of the charity. Rotarians were informed that the hospice Ty Hafan was opened in 1999 and its first patron was HRH Princess of Wales who persuaded world famous singer Luciano Pavarotti to perform in an opera in 1995. The funds from this performance enabled the hospice to become established and today it supports over 600 families in west Wales mainly south of Aberystwyth.
Based in Sully near Barry the hospice is situated near the waters edge and offers a range of facilities including a Hydrotherapy pool and a multi scenery room that has an interactive floor simulating Autumn leaves and butterflies and ladybirds to put children at ease. Shelley remarked that even mothers and fathers are catered for with Mums and Dads groups that give parents a chance to relax and meet families with children of similar needs.
Following the talk President Rob Donaldson gave the vote of thanks.
PHOTO Immediate Past President Ken Griffiths and Shelley Kirkham.

A YEAR IN LLANDEILO ROTARY CLUB

On Thursday evening 15 September Llandeilo Rotary Club were entertained by Isabelle Williams accompanied by her friend Carwen George. Isabelle a native of Gorslas now studying English at the University of Exeter was partly sponsored by Llandeilo Rotary Club which enabled her to join a group of 27 fellow students all based at the University of Exeter to journey to Peru to trek to the Inca City of Mahu Picchu a designated UNESCO World Heritage Site. Their aim was to raise monies for their sponsored charity Worldwide Cancer Research. Isabelle related that the journey of a lifetime got off to a bad start when her luggage was mislaid en route in Madrid.Fortunately she was wearing her walking boots but had to resort to buying the rest of her gear from local markets.It was late August when her party arrived in Lima and then Cusco. A period of acclimatisation was followed by many hours of walking over several days through rain forest and dramatic mountainous scenery with temperatures ranging from freezing to 30 C.
The group were accompanied by three tour guides who undertake the trek three times on average every year. Isabelle related that thankfully no one suffered from altitude sickness.On the final day to the peak her party rose at 4.00am to climb the 4,000 steps from the town of Aguas Calientes to the Lost City. This took 1.5 hours but she related that earlier 30 coaches full of tourists had already reached the Lost City!  Isabelle had to raise £2,900 as an individual to qualify for the trip and her group raised a magnificent £25,000 for the cancer charity. The vote of thanks was delivered by Immedaite Past President John Walford.
President Rob Donaldson, Isabelle Williams, Carwen George and Past President John Walford.

On Tuesday, 13 September Rotarians from Llandeilo were amongst many guests attending a Science Cafe evening undertaken by Cancer Research Wales. The night of Science and Discovery was held at the Victoria Hall in Lampeter. The evening was to welcome all those who had supported the charity enabling them to carry out their important work into combating the many cancers prevalent throughout Wales. A number of exhibitions were on display and staff were happy to discuss their work with their audience. The Charity was celebrating their 50th Anniversary 1966 to 2016 and their Charity Director  Liz Andrews pointed out that all monies raised are spent in Wales. Liz said that every day there are 50 new cases of cancer diagnosed in Wales.She went on to say that an early diagnosis is the way to saving lives and the charity relied on the generosity of the public to continue the research into beating the many forms of cancer. This theme was echoed by her colleagues who outlined their various departments research into the disease that even effected dinosaurs several hundred million years ago.
The evening was very informal and at intervals cheques were presented to Cancer Research Wales by various organisations. Llandeilo Rotary Club presented a cheque for £600 to Liz Andrews their Charity Director. This was presented by Past President and Senior Vice President Richard Hughes on behalf of Immediate Past President Ken Griffith who last year nominated Cancer Research Wales as one of his chosen charities.
Junior Vice President Martin Peake, Liz Andrews of Cancer Research Wales, Past President David Owen and Senior Vice President Richard Hughes.

Friday, 24 June saw the installation of Rob Donaldson as the President of Llandeilo Rotary Club for 2016-2017 at the White Hart, Llandeilo. Rob who lives in Salem was also President of the club in 1997 to 1998.The evening was well attended with guests including the Mayor of Llandeilo Councillor Colin Jenkins, President of Ammanford Inner Wheel Karen Davies and her husband Councillor Alun Davies with ladies of Inner Wheel and Rotarians and their wives supporting the evening.
Earlier outgoing President Ken Griffiths summed up his year that he described as being both a fruitful and challenging 12 months.Ken then presented a Ladies Jewel to Biddy Donaldson and Biddy presented a bouquet of flowers to Marjut Griffiths.
President of Inner Wheel Karen Davies spoke fondly about Dr Elizabeth Jones a staunch and lifelong supporter of Inner Wheel who had recently passed away and recalled her recent visit to the new Wales Air Ambulance headquarters.President Rob announced his chosen charities for his year in office to include Shelter Cymru, Heart Foundation Wales and Wales Air Ambulance.The evening closed with a raffle in support of ShelterBox that raised £160 towards the organisation which together with a previous evening will result in a cheque for £605 being sent to the charity.A vote of thanks was then delivered by Junior Vice President Martin Peake. 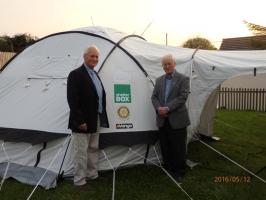 A Year in Llandeilo Rotary

The club's application for a share in the Co-op community fund has been accepted . The community fund receives 1% of co-op branded products purchased which is divide between 3 local charities- Ffairfach school, RSPA and ourselves