Rotary International embarks on its second century of service this month. In the British Isles, members enter this chapter under a new head. Daisy Ayliffe caught up with the new president of Rotary International in Great Britain and Ireland, Mike Webb, and found out how this humanitarian service organisation is changing to meet the challenges of the future.

Rotary International is the largest humanitarian service organisation of business and professional men and women in the world, with some 1.2 million members, operating in 168 countries, with Equatorial Guinea and Tajikistan admitted this year. In the last twelve months, more than £20 million was raised by Rotarians in Great Britain and Ireland for charitable causes, as well as £6.5 million raised for the Asian Tsunami Appeal. In the same period more than 10,000 humanitarian service projects were completed at home and abroad.

Service organisations differ from charities in the way that they are funded. Rotarians pay an annual subscription to be part of their club, and their money funds the administrative costs of the organisation. Refreshingly, this means that 100% of public donations can be committed solely to charitable causes. Webb says the club’s work in the aftermath of the Asian tsunami illustrates this point well.

Our club to club contacts around the world meant that we could raise money and ship directly to a Rotary club in the affected areas. We knew the money we sent was going to be looked after, and that it would be used on the ground straight away. The way we work allows us to avoid cumbersome government machines that can leave foreign aid completely unused for long periods," Webb explained.

Great Britain and Ireland is home to around 1,850 clubs, each completely autonomous from the next. Whilst every club is free to work on the projects it chooses, the President’s focus also encourages a common voice. We don’t tell clubs what to do," Webb says. But we do tell them about our preferred projects with a focus on health, literacy and clean water."

In his presidency, Webb’s preference has gone to two very different charities that are linked by a common theme; both offer the prospect of profound life change.

operations and medical treatment, the ships brings hope and healing to the poor." The charity’s goal is to serve one million people a year.

Mercy Ships appeal to Rotarians because they carry out operations in countries that don’t have medical resources. The amount of good that they are doing is huge. They are making a difference to people’s lives and we wanted to be associated with their work." Rotarians in Great Britain and Ireland will be involved in fund raising for an operating theatre on the new Africa Mercy ship and are also encouraged to work on the Mercy ships themselves. Volunteering and assisting on the ships allows members to experience the service on the front line.

Mikes second project is Hearing Dogs for the Deaf

I have long held the belief that we have not focused very much on deaf people," he explains. Hearing dogs mean deaf people can live their lives without the need for a carer. They allow deaf people to respond to alarms, the telephone and the door and to get on with their everyday lives. For many, hearing dogs mean the freedom and independence to live life."

Hearing dogs for the deaf represents a British based project, and illustrates how varied and multi-form Rotary’s work is. Work in Great Britain and Ireland takes place along side ambitious assignments around the world, including thousands of projects in Africa. Live 8, the G8 summit and Blair’s presidency of the EU have seen repeated assertions of British commitment to Africa. Although this focus has been warmly received by Rotarians, Rotary clubs have been committed to the continent for many years.

We are on the ground all over the world," Webb enthuses. We have a very long tradition of supporting Africa, and we have been focused on the continent for a long time. I am pleased that world leaders have finally taken this on board. Rotary will continue to help Africa at all levels and we are happy to work with government agencies on this. One of the biggest challenges currently is completing the world polio eradication programme. Asia is on target to be declared polio free this year and this leaves pockets of polio in Africa. Rotary is committed to working with its global partners to complete this programme"

As the need in Africa and indeed in many parts of the world is increasing Rotarians work hard to recruit new members. Webb says clubs are being encouraged to inject new ideas into the work that they are doing. We are trying to make the clubs accessible to meet the needs of modern business people."

Ideologically we have not changed in 100 years," he adds. We are here to help disadvantaged people both at a local and international level. I am looking forward to the challenges ahead and I remain committed to continuing our good work for many years to come." 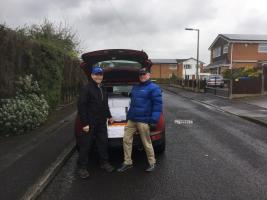 Rotarians Mike Edwards and Peter Cooke have taken 77 shoe boxes to the central distribution depot in Preston for shipment to Romania. The boxes contain presents for children and adults . 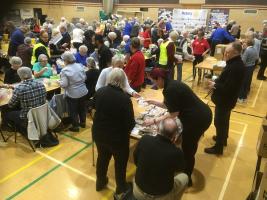 Rotarians from across the North West attended the Prescot & St Helens Rise Against Hunger Meal Pack yesterday, despite the awful weather. They packed 62,000 meals in 4 hours which will feed 278 children for one year. Another example of Rotary in Action

A Letter from Srilanka

Rotary Dat at the United Nations