A couple go for a meal at a Chinese restaurant and order the 'Chicken Suprise' The waiter brings the meal, served in a lidded cast iron pot.

Just as the wife is about to serve herself, the lid of the pot rises slightly and she briefly sees two beady little eyes looking around before the lid slams back down. "Good grief, did you see that?" she asks her husband.

He hasn't, so she asks him to look in the pot. He reaches for it and again the lid rises, and he sees two little eyes looking around before it slams down. Rather perturbed, he calls the waiter over, explains what is happening, and demands an explanation.

Please sir," says the waiter, "what you order?"

Ah... so sorry," says the waiter, "I bring you Peeking Duck"

Amish elevatorAn Amish boy and his father were in a shopping mall. They were amazed by almost everything they saw, but especially by two shiny, silver walls that could move apart and then slide back together again.

The boy asked, "What is this Father?"

The father, never having seen an elevator responded, "Son, I have never seen anything like this in my life, I don't know what it is."

They continued to watch until it reached the last number and then the numbers began to light in the reverse order. Finally the walls opened up again and a gorgeous 24-year-old blonde stepped out.

The father said quietly to his son... "Go get your mother".

Joe went to visit his 90-year-old grandfather somewhere out in the country. After spending a great evening chatting the night away, in the morning Joe's grandfather prepared breakfast of bacon, eggs and toast. However, Joe notice a film-like substance on his plate, and questioned his grandfather asking, "Are these plates clean?"

His grandfather replied, "They're as clean as cold water can get them. Just you go ahead and finish your meal sonny!"

For lunch the old man made a ham salad. Again, Joe was concerned about the plates as his appeared to have tiny specks around the edge that looked like dried egg and asked, "Are you sure these plates are clean?"

Without looking up the old man said, "I told you before sonny, those dishes are as clean as cold water can get them. Now don't you fret, I don't want to hear another word about it!"

Later that afternoon, Joe was on his way to the village, as he was leaving, his grandfather's dog started to growl, and wouldn't let him pass. Joe shouted his Grandfather, "your dog won't let me get to my car".

Without diverting his attention from the football match he was watching on TV, the old man shouted ...

"Coldwater get back in your kennel"

It seems that this old couple are having trouble remembering
things, so they sign up for a memory course. The course is
wonderful; they come home and tell all their relatives, friends,
and neighbours about it. Some months later, a neighbour approaches
the man as he tends the garden.
Neighbour asks, "Say, Ed, what was the name of the
instructor of that memory course you liked so much?"
Ed replies, "Well, it was...hmmm...let me think a minute...
What's the name of that flower, you know,
the one that smells so nice, but has thorns on the stems...?
Neighbour says, "You mean a rose?"
Ed replies, "Yeah, that's it!...(shouting toward house)
Hey,Rose, what was that memory course instructor's name?

A gorgeous young redhead goes into the doctor's office and says that her body hurts wherever she touches it.

"Impossible!" says the doctor. "Show me."

The doctor says, "You're not really a redhead, are you?

"I thought so," the doctor says. "Your finger's broken."

During a visit to the mental asylum, a visitor asked the Director what the criterion was which defined whether or not a patient should be institutionalized.

Well, said the Director, we fill up a bath, then we offer a tea spoon, a teacup and a bucket to the patient and ask him or her to empty the bath.

Oh, I understand, said the visitor. A normal person would use the bucket because it's bigger than the spoon or the teacup.

No, said the Director, A normal person would pull the plug.

Do you want a room with or without a view?

"A Scottish couple from Aberdeen decided to go to Bournmouth to thaw out during the icy Scottish winter. They planned to stay at the same hotel where they spent their honeymoon 20 years earlier.

Because of hectic schedules the husband left Aberdeen and flew to Bournmouth on Thursday, with his wife flying down the following day, The husband checked into the hotel. There was a computer in his room. so he decided to send an e-mail to his wife. However, he accidentally left out one letter in her e-mail address, and, without realising his error sent the e-mail.

Meanwhile, somewhere in Yorkshire, a widow had just returned home from her husband's funeral He was a minister who had a heart attack and died. The widow decided to check her e-mail, expecting messages from relatives and friends, after reading the first message, she screamed and fainted. The widow's son rushed into the room and saw the computer screen which read:-

PS. Sure is hot down here!

Little Nancy was in the garden filling in a hole when her neighbour peered over the fence. Interested in what the rosy-faced youngster was doing he asked, "What are you up to Nancy?"

A woman goes to register at the local benefits office.

"How many children?"asked the civil servant.

"All the same name? Doesn't that get confusing?"

"No," says the woman "it's great because when they are out playing in the street and I shout "Alec your dinners ready or Alec, go to bed now, they all do it"

"What if you want to speak to one individually?" says the perturbed civil servant.

"Oh, that's easy," Says the woman "I just call out his surname"

Details for our Golden Olden Afternoons

A celebration of the Presidents year in Office

WOULD YOU LIKE TO COME AND TALK TO US? 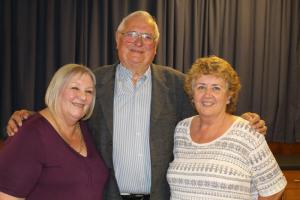 Do you live in Radcliffe? Are you 18 or under? Are you looking for a bit of financial support for a project for you or your group and can't find any? Perhaps we can help. click on details and read more about the Riverside fund.