Another fantastic year for Crucial Crew with 3 new scenarios. 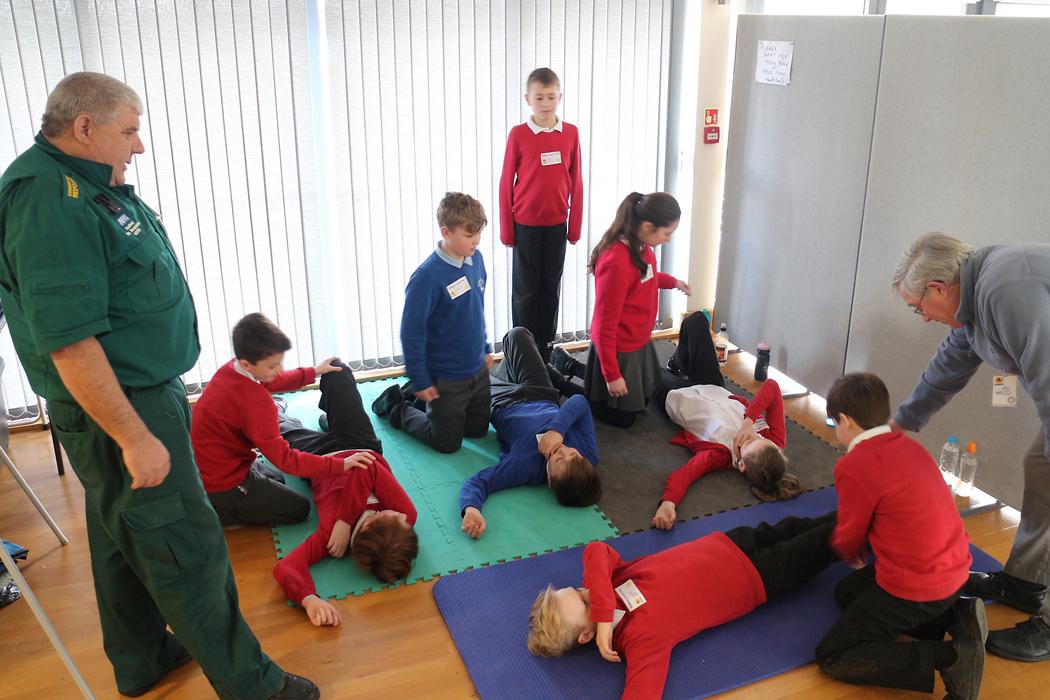 Learning about the 'recovery position' in the 1st Aid scenario. 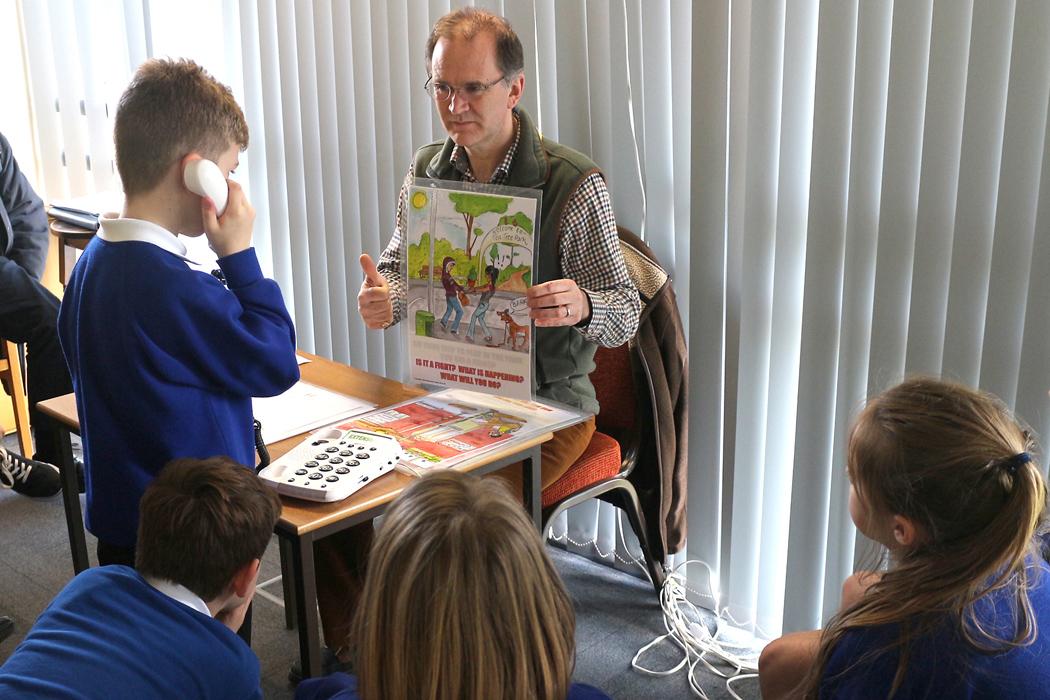 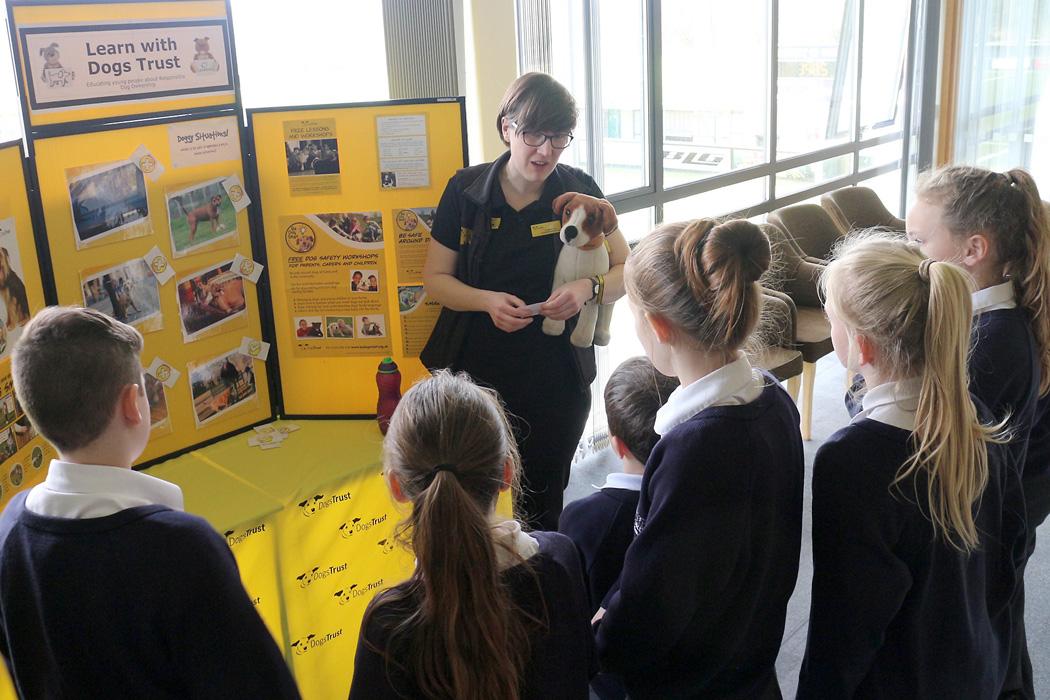 Learning how to respect dogs

Advice on approaching a dog. 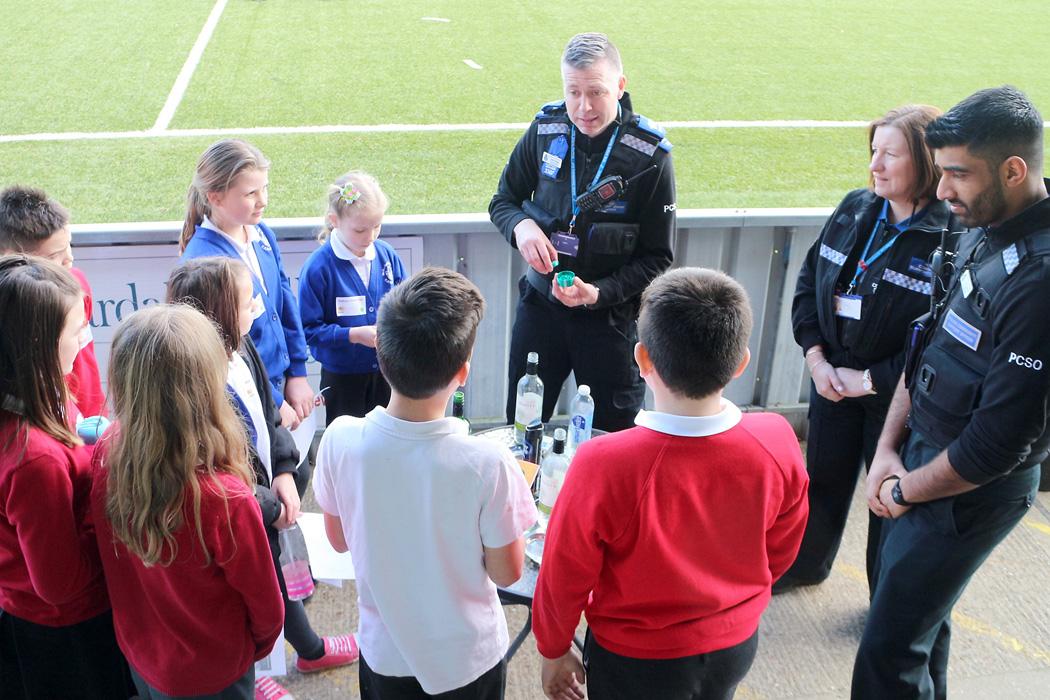 Finding out about the dangers with alcohol and drugs 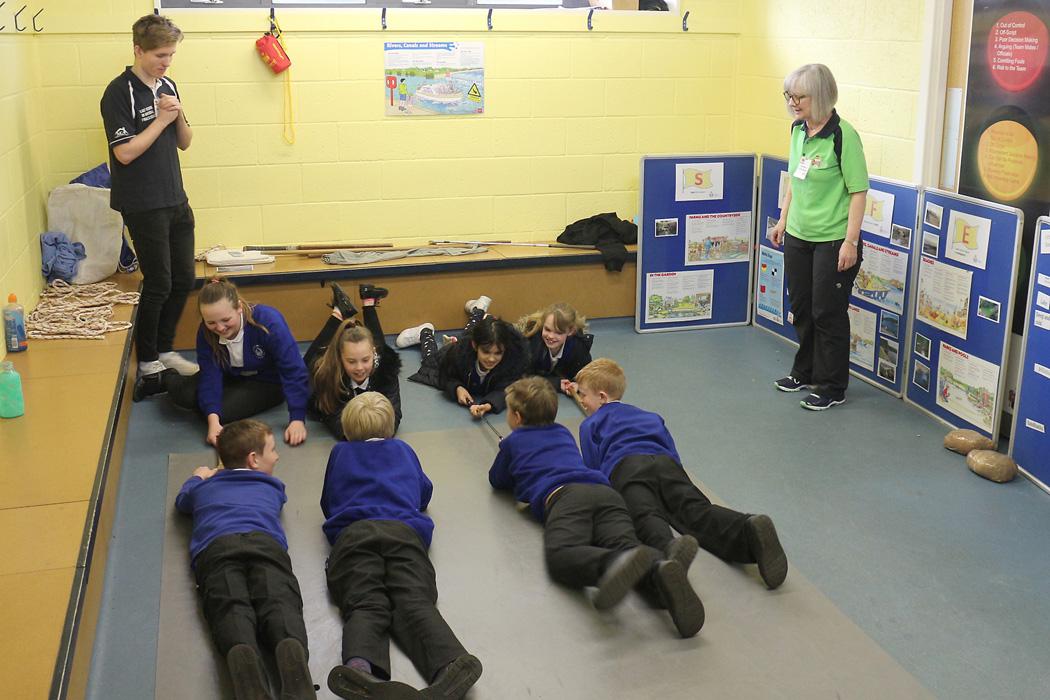 Youngsters learn how to rescue a friend from water. 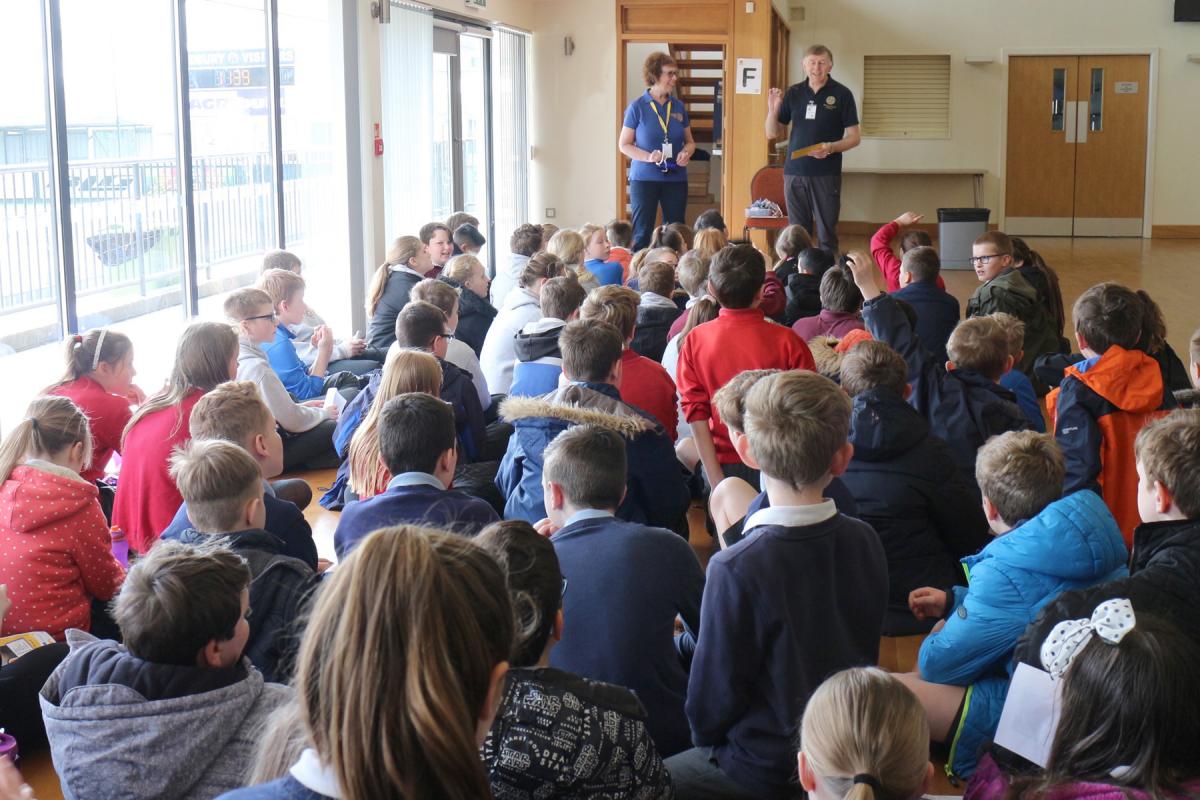 Youngsters are identified as 'Star Performers' if they do really well.

Sudbury Rotary Club welcomed another seven hundred Year-6 youngsters from 28 local schools during a week towards the end of March to its eighteenth Crucial Crew, bringing the overall total to around 11,000 since the activity was launched 18 years ago. Unlike other Crucial Crews in Suffolk, which are organised by the various District Councils, Sudbury Crucial Crew is funded, organised and run totally by Sudbury Rotary Club.

Schools were invited to come along to either a morning or afternoon session during Crucial Crew week. Their pupils were divided into ten groups of 7 - 8 children, and they were guided around a circus of ten different 14-minute scenarios by Rotarians, partners and friends. After an initial introduction, the children’s attention was grabbed with an attempted abduction, when they were left alone ‘en masse’ for a couple of minutes, during which time a ‘workman’ came along carrying a lot of boxes, which were dropped and a request was made for help to take the boxes to a car. For the first time our ‘workman’ was female and she succeeded in leading away a few youngsters every time, before they were escorted back by a police officer, who warned them all of the dangers of going off with a stranger.

This year saw a significant number of changes, with three completely new scenarios being introduced. Tesco (Sudbury) organised and ran an activity to promote healthy eating and personal hygiene, where the need for clean hands when touching food was emphasised before the children were given advice about a balanced diet and invited to select from a range of appropriate foods. There was then an opportunity to eat their choice, which proved to be very popular.  The Dog’s Trust provided the second new scenario, where a representative of the Trust taught the youngsters about when not to approach a dog and also how they could best stroke a dog (with the owner’s permission). The third new scenario, following requests from the schools, dealt with staying safe on the internet. This was organised by our local Police Community Support Officers, who transformed a room into a child’s bedroom, with posters, soft toys and even a bed, to highlight the dangers associated with social media websites. It was incredible to see the concentration on children’s faces as they cuddled the toys and watched the CEOP video.

Our ‘Water Safety’ scenario was given a total ‘make-over’ by members of Ipswich Lifesaving Club, who provided a completely inter-active experience, with the children rescuing each other from an imaginary lake with the use of  a piece of wood, a jumper, a cricket bat and lengths of rope.  We would like to thank all of the helpers, who made these new scenarios such a success.

The usual mix of regular scenarios completed the programme, with Suffolk Fire Service once again using their ever popular mock-up of a child’s bedroom to great effect to point out areas of potentially high fire risk, before simulating a fire with theatrical smoke and rescue by a fireman wearing full breathing apparatus. UK Power Networks returned with a small scale version of their interactive display, which showed the dangers associated with electricity and the likely consequences to the unwary.  There was an opportunity to make a ‘999-call’ to our own emergency operators and youngsters were also taught some first aid and how to move someone to the ‘recovery position’, as well as being given advice on staying safe on the road.

Thomas Gainsborough School once again allowed twelve Year 10 drama pupils to join us in two ‘shifts’, working alongside the contingent of PCSO’s, to act as anti-social youths and drug users giving an extra dimension to the final scenario, as it allowed the police to discuss and explain correct behaviour, depending on how the groups of children responded to the situation.  It was interesting to hear that many of the actors had themselves been through Crucial Crew a few years ago.

So that the lessons learnt are reinforced, each pupil has access to material that supports continued learning at home and in the classroom via the Sudbury Crucial Crew website, which also provides key information for teachers prior to their visit.

To be successful, the project requires a terrific additional commitment from Rotarians, friends and anyone who can be encouraged to come along and help. In all, around 80 people helped with at least one session, including a number of Rotarians from other local Clubs, many of whom enjoy the experience so much that they return year after year. Our thanks go to all those who helped so willingly and in so many ways.

Thanks are also due to Sudbury Tesco for their kind contribution of refreshments for the volunteers during Crucial Crew week and also for supporting a buffet reception for those who helped during the week.

Thank you to our sponsors and supporters, who this year included :

Although we did not seek financial help from the participating schools this year, we were delighted and grateful to receive donations from :

And finally, our thanks to the following for their active support :