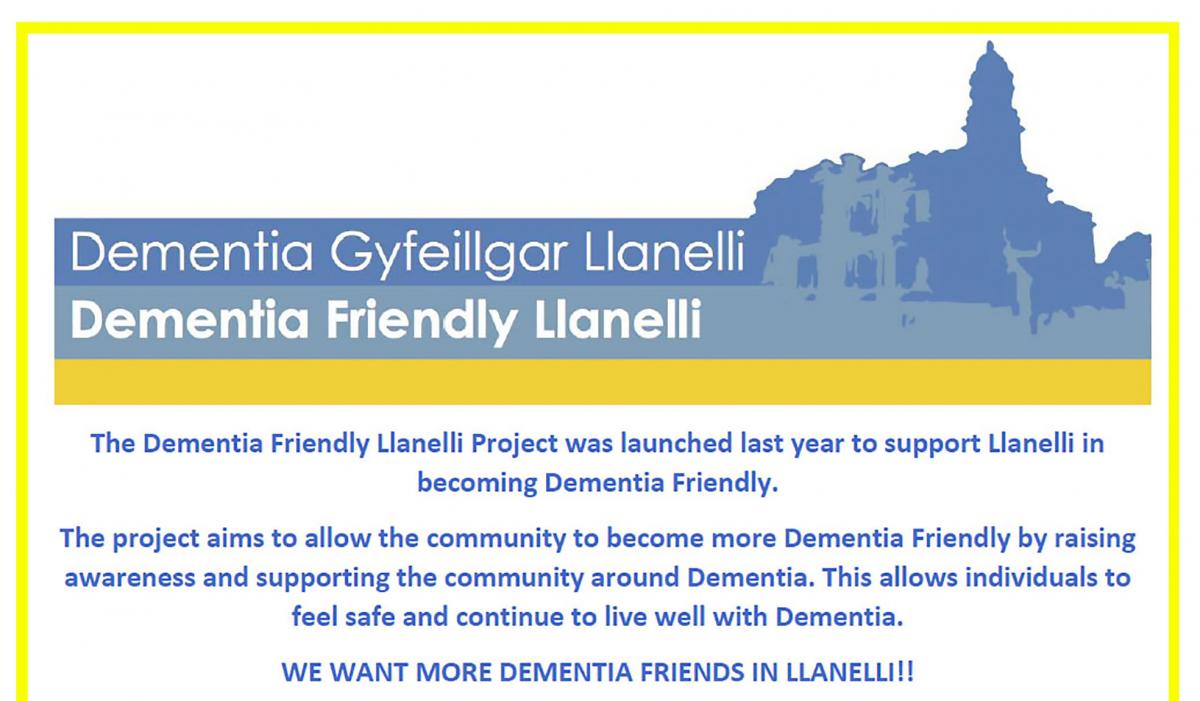 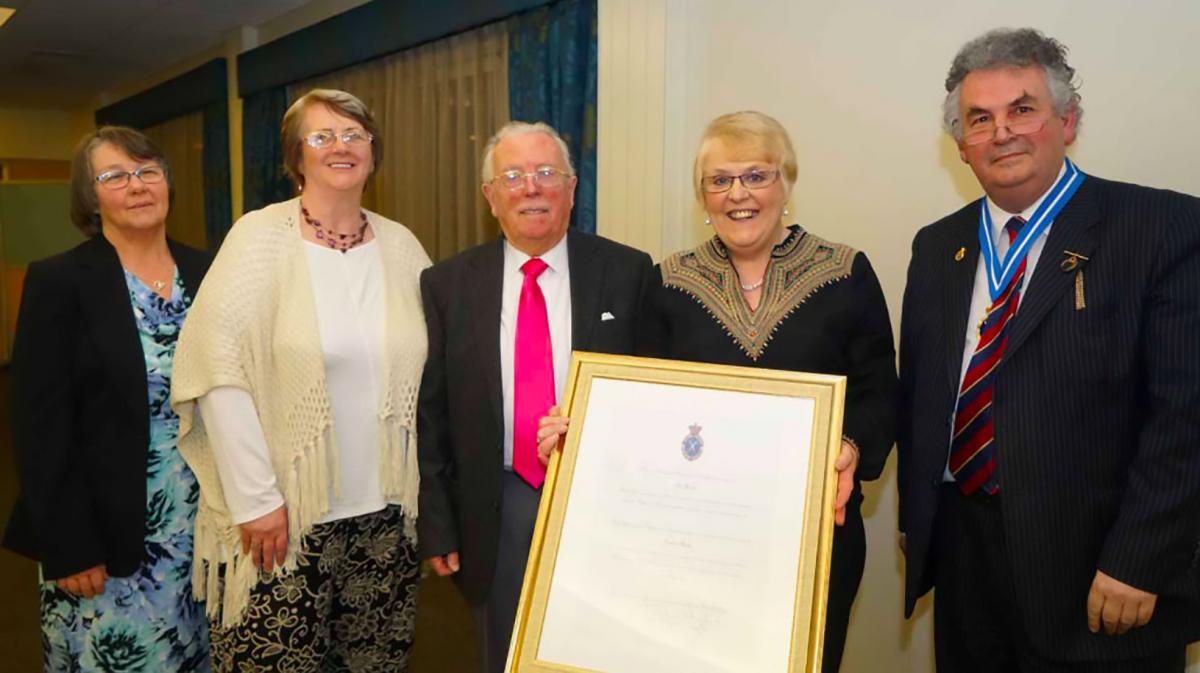 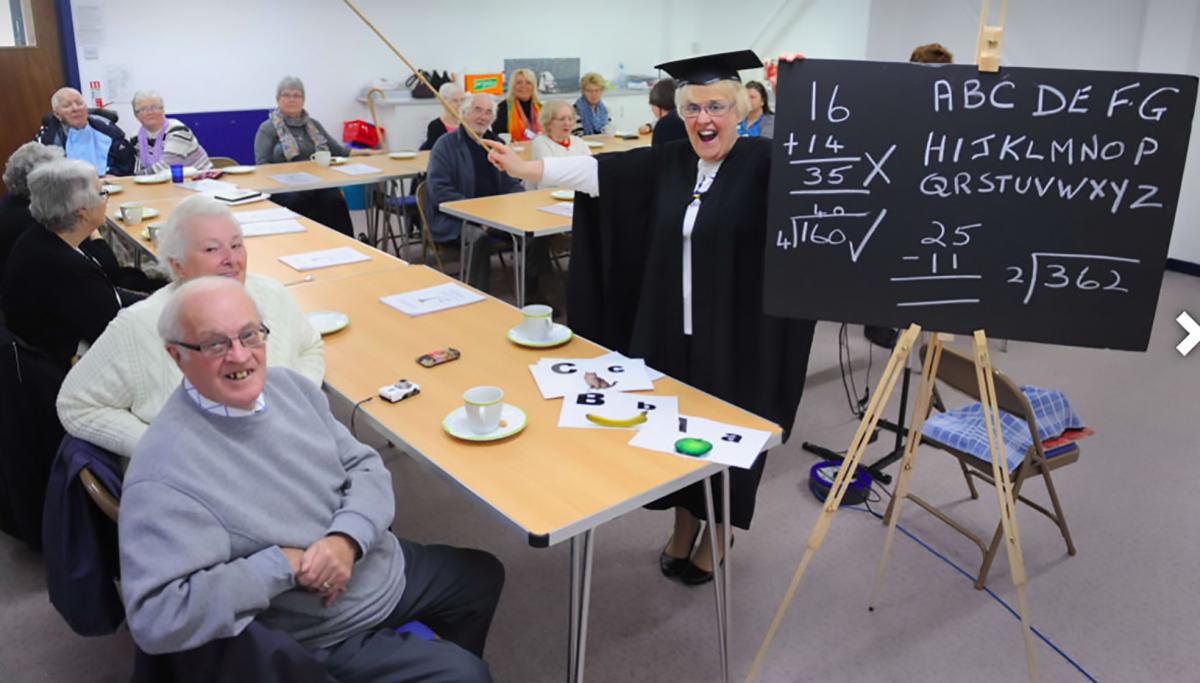 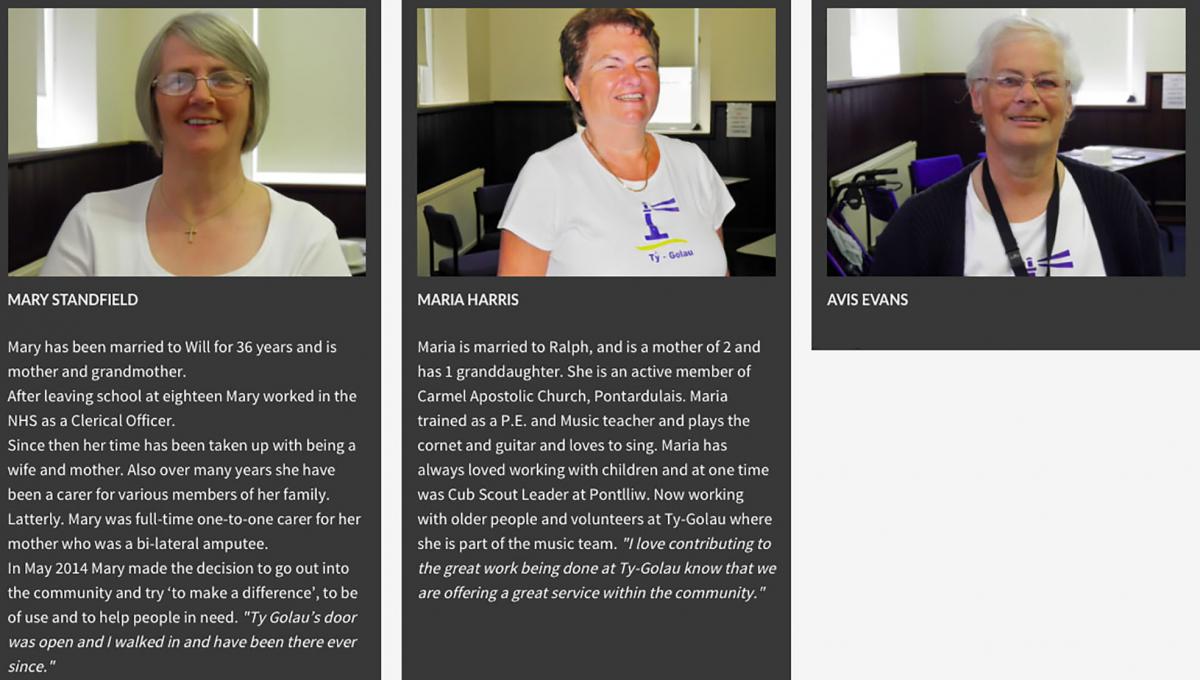 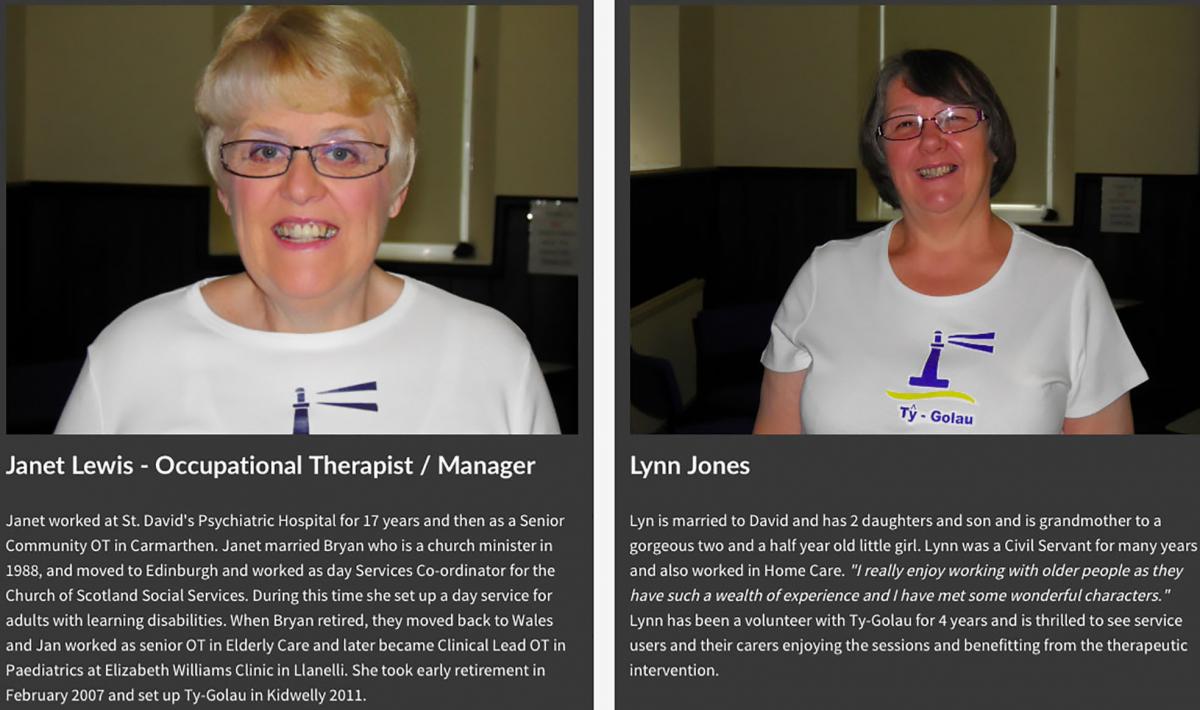 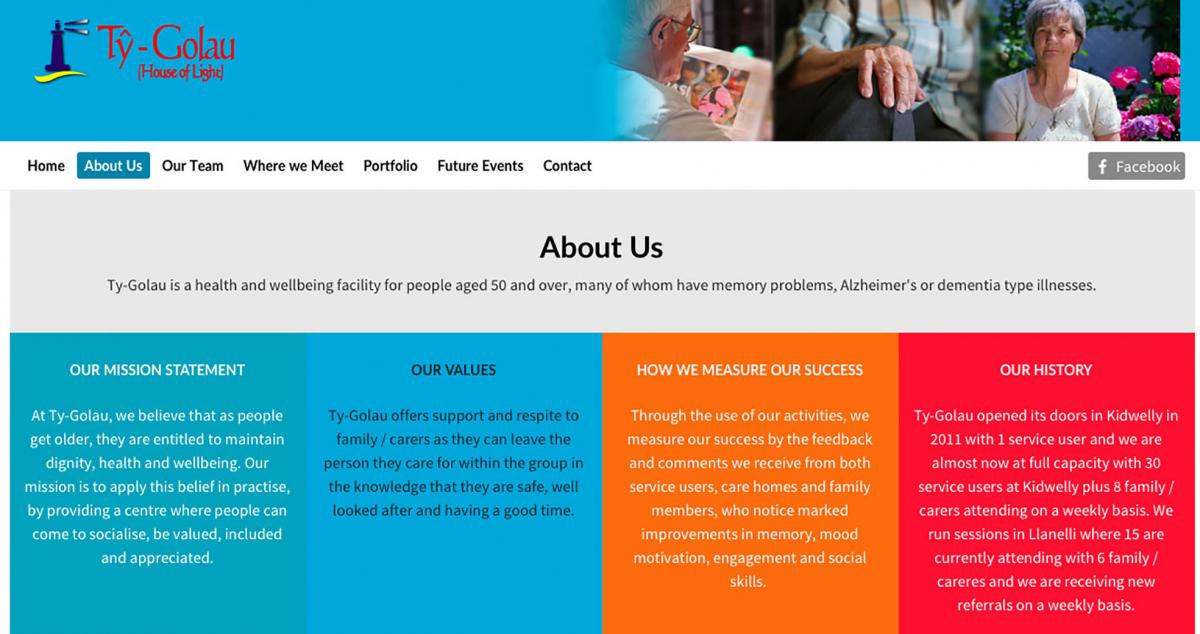 Llanelli Rotary Club engage with Dementia Friends as a new Community initiative in 2016-2017
At Club Assembly in June 2016 President Mark Evans announced that Llanelli Rotary Club would be supporting District Governor Elect Maggie Hughes in getting our 1150 District more involved with the awareness and deployment in making Llanelli more Dementia Friendly
Some of the activities so far have involved :
• Being trained by Marcia Vale from Alzeimers Organisation
• Attending Ty Golau in Llanelli to be aware of the work that Jan Lewis is doing locally to run weekly get togethers for members-Rotary Plan to have a Rotarian Rota to attend these sessions for 2017/2018 Centenery Year
• Raising £1100 for Ty Golau who will use the donation to improve their computer and music systems to make the weekly session more enjoyable for the attendees
• Being part of the Llanelli Steering Team run by Local Council to improve Dementia Awareness
• Planning for Training a Rotarian to become a Dementia Trainer and enhancing the awareness programme within Llanelli Rotary Club
Copies of the Llanelli Steering Team Meeting Minutes on 18th May 2017 are posted below
Jan Lewis attended Rotary Club on 14th June and provided an insight to what the Dementia Friends group do in her Thursday sessions at Ty Golau and what they were planning to spend the donation provided by Rotary

A successful visit from the older persons commissioner took place in February to the market and St Elli Centre. This provided good publicity for the project going forward.  Work to build the profile and network was ongoing. ED welcomed John Williams from Llanelli Rotary. John would be taking up position as Chairman in June and Llanelli Rotary were keen to support the project going forward. Llanelli Rotary had received a dementia friends awareness session, they were also looking to access dementia champions induction training in the near future for a few of the members. Llanelli Rotary had also linked up with Ty Golau and will be supporting them to acquire some new resources. DR advised that Llanelli Community Partnership were working towards becoming dementia friendly. Coedcae School were also interested in being involved in the project. Agreed to make separate contact with the school. CN advised that at present the PANDAS training had been cancelled for the community. Ongoing discussions were taking place on how this will be accessible in the future. LT advised that Asda Llanelli were happy to be involved in the project.

The group agreed that the structure should remain as a steering group with the current members. It was agreed that a wider network group should be implemented that meet on a quarterly basis. This network group can feed into the steering group and support the roll out of the project. Ffwrness theatre were again looking to hold an older persons/wellbeing/dementia friendly day in July. It was agreed that the group would give organisations & businesses the opportunity to become part of the network at this event. The network would then hold a launch event on International Dementia Day on the 21st September

As per the previous meeting it was agreed that more dementia friends sessions needed to take place to roll out the project to other businesses and organisations. Each Dementia Champion agreed to forward dates to ED to put on sessions during June. ED would coordinate these and put together a poster to be sent out to organisations and businesses. MJ agreed she would circulate the poster to members of the BID team.

ED agreed to map local organisations and businesses in the phase 2 area. ED will circulate a list of these to the steering group. Steering group members would then advise which organisations or businesses they could engage with to promote the dementia friendly Llanlli project and the dementia friends session. It was agreed that transport still needed to be part of this ongoing work, ED will again try and make relevant contact. DR discussed with the group the concept of having a ‘Safer Shopping’ day in Llanelli. The idea is to support those individuals who are more frail, have chronic conditions or a diagnosis of dementia to have a safer environment to shop in at a particular time during the week. This would involve having more seating available, more staff/volunteers on hand to help individuals, and less distractions (e.g. loud tannoy announcements). All agreed that this was a good initiative to pilot. It was agreed that a sub-group should be set out to discuss launching this in Llanelli. DR will coordinate this.

Project lead to forward the next meeting date and venue along with action notes from today’s meeting. 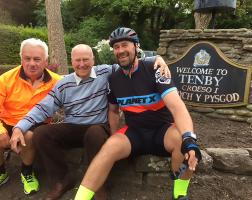 President Mark Evans gets on his bike for charity 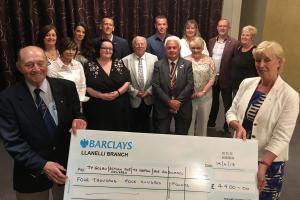 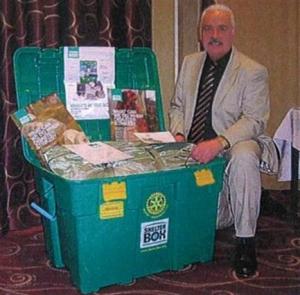