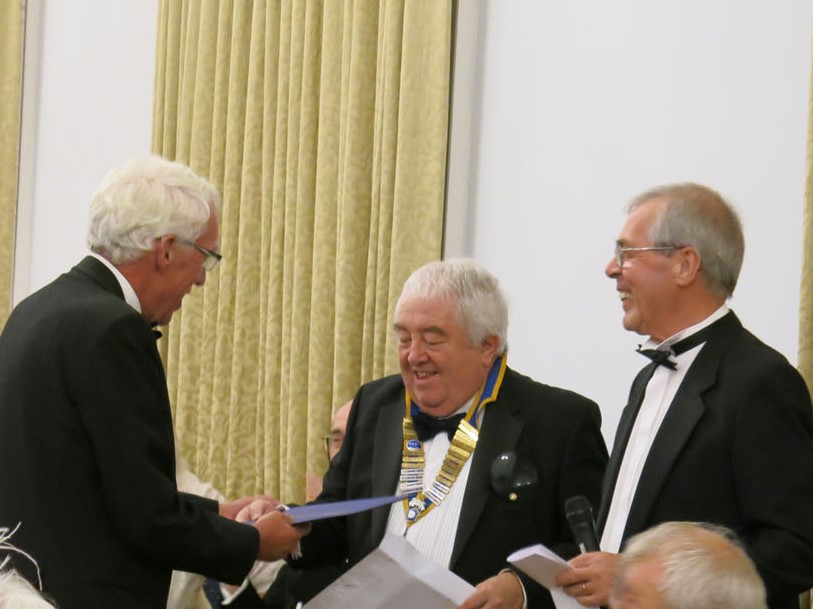 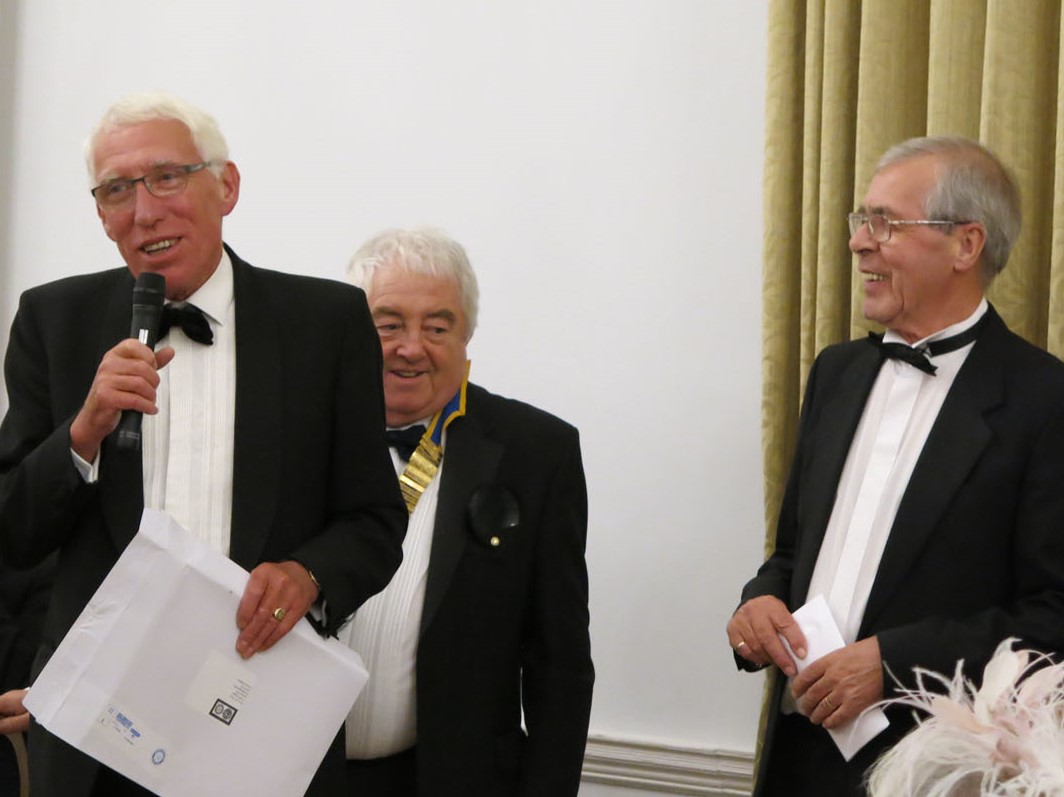 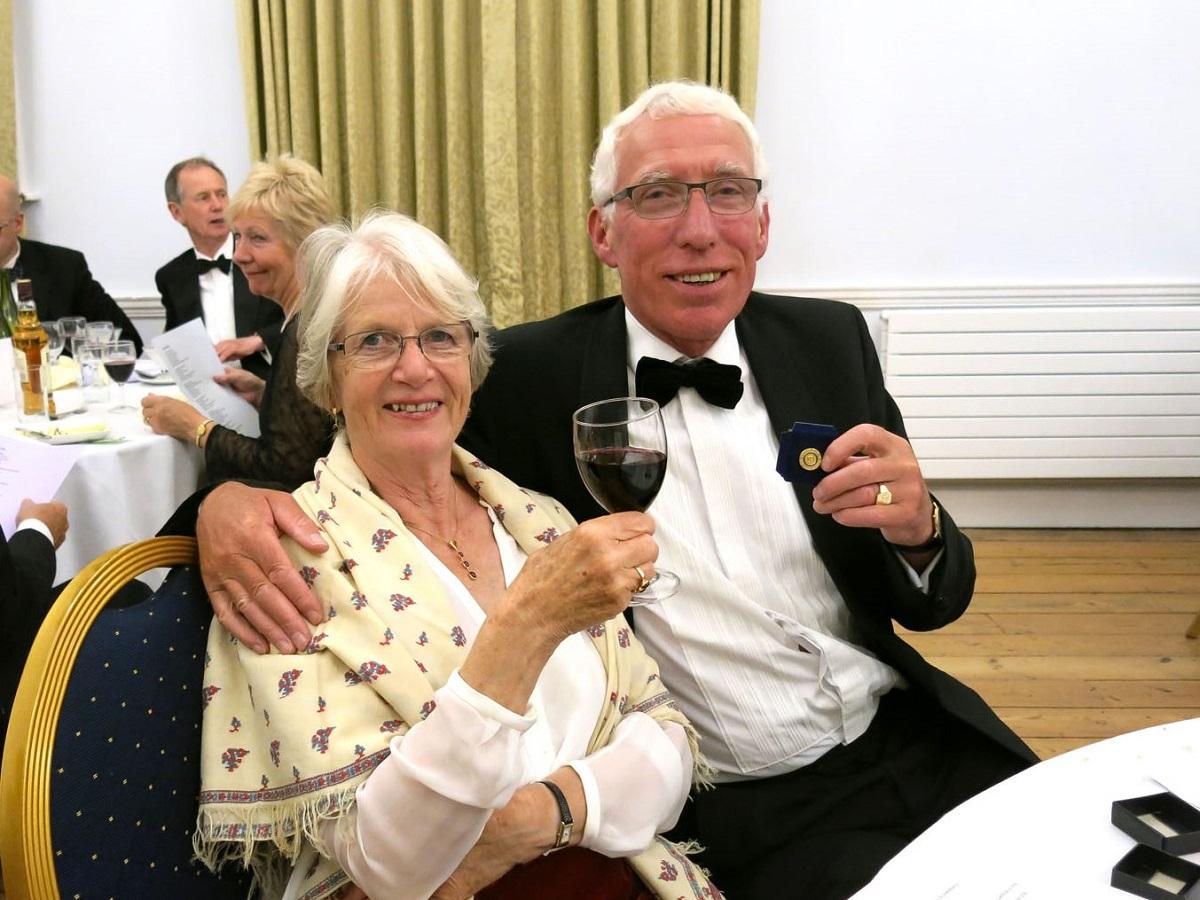 He was a  member of Hexham Round Table, occupying a number of positions including Chairman. We in Hexham have much to be grateful for the organising of the Annual Bonfire and Fireworks – who knows how many limbs and eyes this has saved.

He took a key pivotal role in the creation of the Torch Centre in 1984 and was a founder Trustee. He remains a Trustee of this charity and continues to play a very important part in the decision making of the organisation.

He also became Chairman of Governors of the Sele Primary School in Hexham.

He acted as Secretary to The Abbeyfield Association.

The next move was to become Secretary of Tynedale Rugby Club, an onerous post which required him to resign from Round Table. Later he completed two years as Chief Executive.

Released from these duties he started on the road to become President of the Rotary Club of Hexham and more recently has become our walks organiser.

On the subject of walking he is now a qualified walk leader for the Haltwhistle Walking Festival and their weekly walks.

Then came the prospect of retirement. John had been involved with Hexham Abbey as a member of the PCC and a Warden, but now things were about to hot up!

I believe that this is the first time we have had a recommendation for a Paul Harris award, backed by a Bishop – in this case our recent Rector Graham Usher, now Graham Bishop of Dudley, and I can do no better than to read the Graham’s words:

It is an honour to support the nomination of John Robinson for a Paul Harris Fellowship Award. John has worked tirelessly and with good humour for the town of Hexham over many decades. As well as being a well-respected and trusted family solicitor, he has been involved in a range of community projects and charities. This included being a Churchwarden at Hexham Abbey.

From 2008 – 2014 the Abbey embarked on a significant project to bring the former monastic buildings, lost at the time of the dissolution of the monasteries under Henry VIII, back into the Abbey’s ownership. The community raised £3.2M for their restoration and to create much needed community rooms, facilities and an exhibition telling the history of the site. John captured the vision at an early stage and was an enthusiastic supporter.

In retirement he volunteered (or perhaps had his arm twisted) to become the secretary of Hexham Abbey Heritage, set up to oversee the project, and the company secretary of its trading arm. He put in countless hours of time (for a few years probably the equivalent of full time work), supporting me as the Rector and being utterly thorough in such detail as diverse as charity law, colour of mortar and locking up procedures. At one stage there were immense demands put on the project delivery team by a major funder and this affected the key people involved, even to the detriment of our health. This affected John as well, but with his good grace, cheer, and determination things prevailed.

I know that the Hexham Abbey project significantly ate into John and Kate’s retirement time. He didn’t do as much walking, and time spent in the Lake District was often interrupted. This wasn’t helped by my appointment as a bishop during the building phase of the project. However, John gave selflessly to see the project through to completion and lead a remarkable renaissance for Hexham and its Abbey.

I commend John to you most warmly for an award.

So, in the building which John worked so hard to secure, I would invite President Peter to present John Robinson with his Paul Harris Fellowship Award.