Come along to enjoy a fantastic community event. Something for all the family! 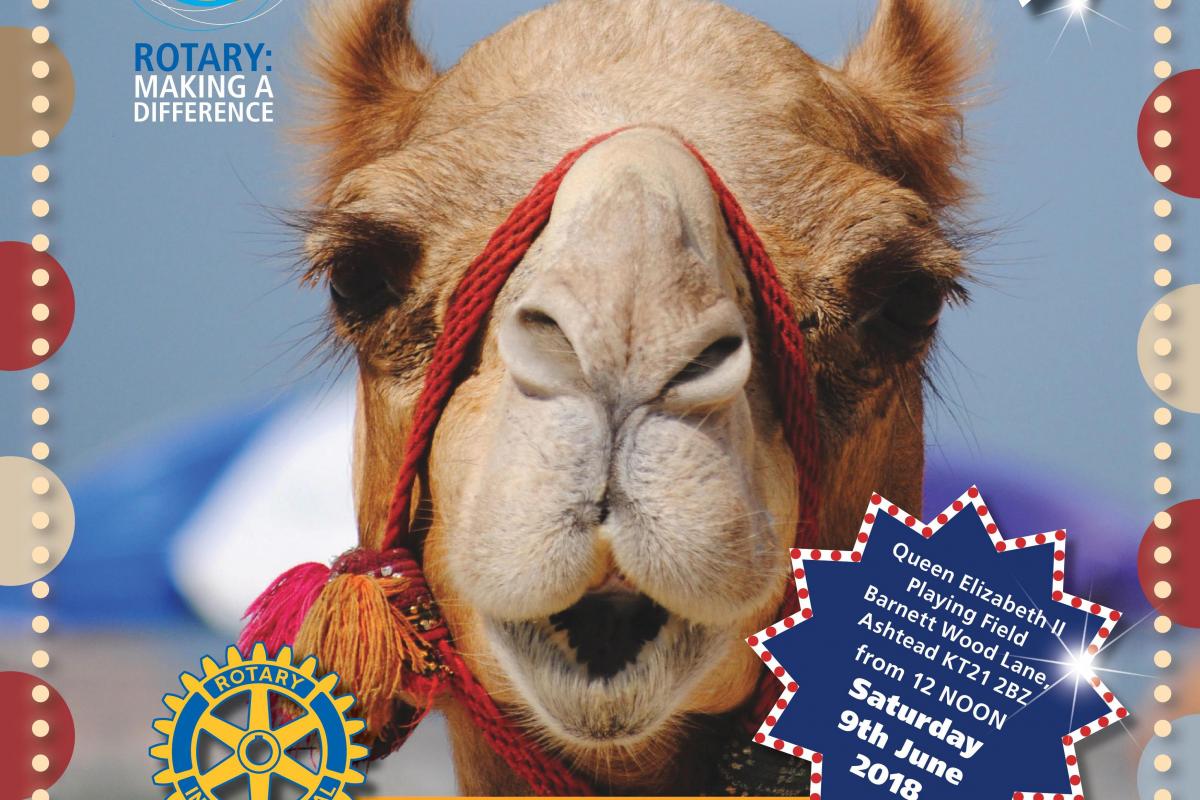 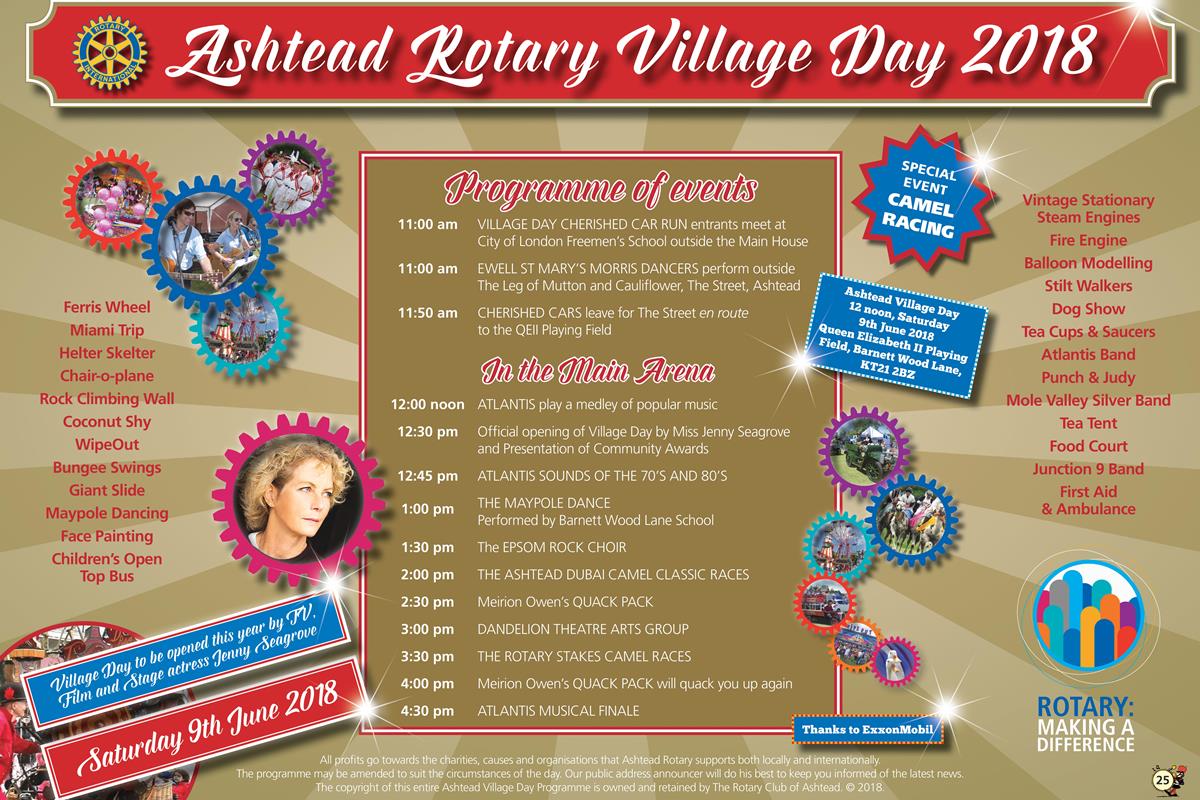 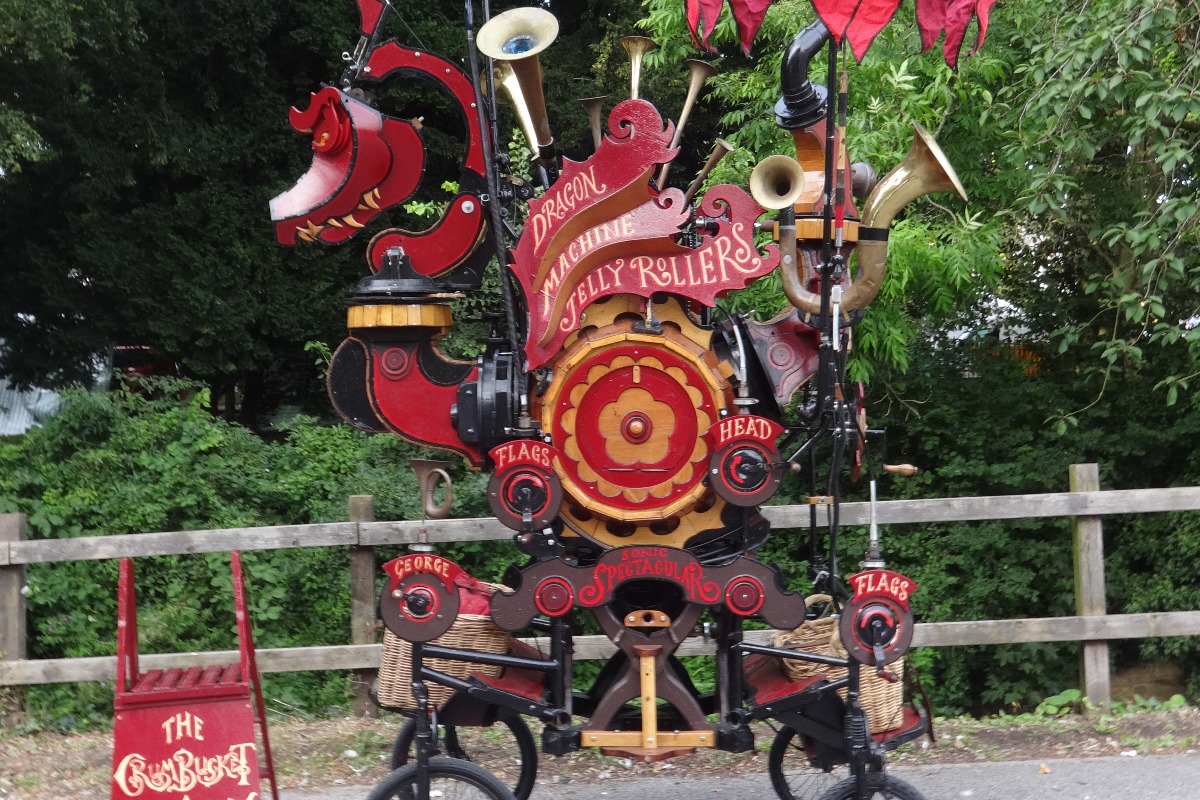 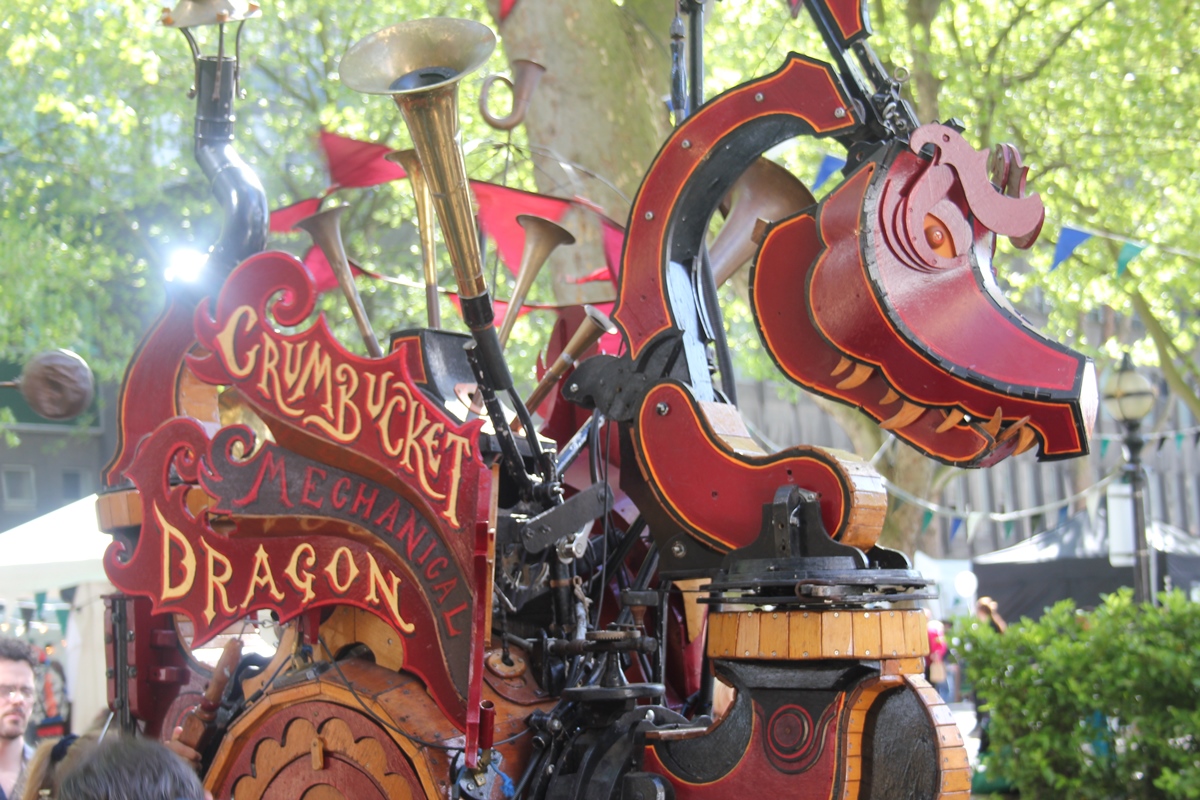 After a spring of unpredictable burning heat, showers and occasional thunderstorms, the weather gods provided perfect weather for the 35th Ashtead Rotary Village Day. The event began with the cherished car run that set off from the City of London Freemen’s School and made its way through the heart of Ashtead, attracting a fantastic crowd. The cars were met at the Queen Elizabeth II recreation ground by cast members from Leatherhead Theatre’s Aladdin and four beautiful camels, brought by Joseph’s Amazing Camels. For the first time, the cherished cars were exhibited within the event grounds and prizes were awarded to the best in show. Alongside the cars, entertainment was provided by way of the Crumbucket Mechanical Dragon and many small hands were needed to play the music, make him move and blow the bubbles! Other music was provided throughout the day by bands Atlantis, Junction 7 and the Mole Valley Silver Band.

The event was officially opened by Aladdin, Princess Jasmine, Widow Twankey and Abanazar who had the assembled crowd dancing away to various songs from the forthcoming production in December. Then followed a welcome from Ashtead Rotary Club president, Gareth Evans and the presentation of the Ashtead Community Awards to Rosemary Stark and the Ashtead Common Volunteers. The arena hosted a wide variety of entertainment: Joseph’s Amazing Camels had several attempts at a 100m “sprint”, matched in distance only by the “sheepdog” seamlessly herding Meirion Owen’s Quack Pack. There were also wonderful performances from the Barnett Wood Lane School Maypole Dancers, Dandelion Theatre Arts Group and the Epsom Rock Choir.

Further entertainment by way of games, tombolas, raffles and activities, was provided by the more than one hundred organisations represented on the field and there were many, beautiful gifts on sale. 80% of the stalls were charities, clubs and businesses from the Ashtead, Epsom and Leatherhead areas and for 30% of the stallholders it was their first time at Village Day! Little ones could let off steam on the giant inflatables and bumper cars, followed by a quiet sit down in front of the Punch and Judy show, whilst the animal lovers could enjoy the ever popular Dog Show.

There was a wide variety of food on offer from around the world, including German sausages, Carribean delights and Greek offerings (although you had to visit the Ashtead Scouts stall to smash the plates!). There was also traditional burgers, hotdogs and chips; hearty toasted sandwiches; and delicious homemade cakes.

Ashtead Rotary Club would like to thank everyone who participated in Village Day 2018. It is a small club in terms of membership so it relies on an army of volunteers, donors, sponsors, concessions and stallholders to make Village Day such a successful event!

more An annual event for the whole community, organised by Ashtead Rotary Club. 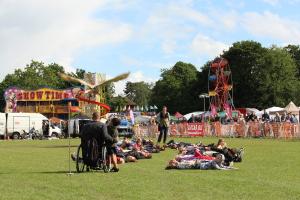 more Village Day 2020 cancelled due to coronavirus pandemic but there are still opportunities for everyone to get involved with the Ashtead community. 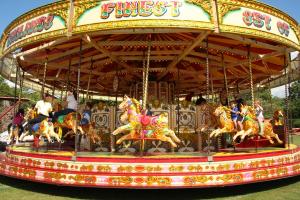 back An annual event for the whole community, organised by Ashtead Rotary Club.