Gill is known for her love of Furness Abbey but she casts the net a bit wider for her latest book 'Barrow-in-Furness in 50 Buildings'.

Our speaker this week was Gill Jepson, local author and historian speaking about her latest book, Barrow in Furness in 50 Buildings.  She opened by saying how proud she was of her home town and of the incredible heritage the founding fathers had left. She said that in the time allocated to speak she could not talk about all the 50 buildings in her book, so had chosen a few which were on her own list of favourites.

She started with Furness Abbey, with which she has a long association, being Chair of the Furness Abbey Fellowship, an organisation devoted to promoting it. 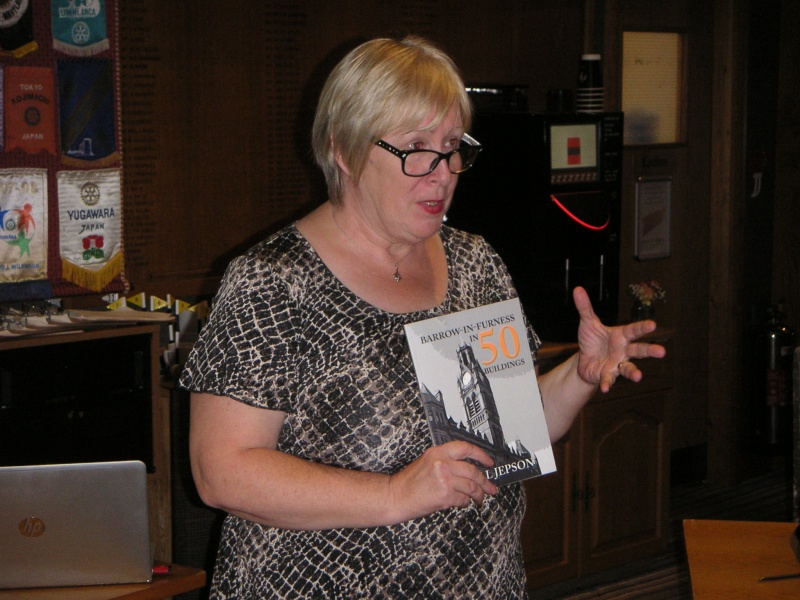 Although much of the Abbey we see today was destroyed during Henry’s infamous purge in 1537, Gill told us that the original Abbey, founded by Savigniac monks in 1127 is some 2 metres below the current Cistercian Abbey. Much of the original was pulled down by the Cistercians and rebuilt in a style they favoured, although there are fragments remaining which careful observers of the building can spot.

In its time it was second only to Fountains Abbey and the Abbot was a person of great influence person, possessing apartments in the Savoy Palace in London, close to the seats of power in the land! One of the later gems of the site is the custodians hut, which Gill's Association is in the process of preserving. It dates from the early 1900’s when the Abbey was looked after by the Ministry of Works and is one of few of its type still remaining. She also told us that the Abbey Tavern buildings have been purchased and plans are being developed to re-purpose them and preserve them for future generations to enjoy.

Gill said that sadly many old buildings of great architectural merit had been destroyed due to previous authorities attempting to modernise the town! She said it is sad that the two grammar schools had been bulldozed and wished that they could have been re-purposed. The Nan Tait centre was an example of re-purposing, the old “Tech School” had been sympathetically restored and now is the home of several organisations including county council and the town’s registrar.

Gill talked about the Town Hall, a sandstone Victorian gothic edifice to rival Manchester’s Town Hall. Despite arguments which is the front and which is the back, she insisted that the front, with it’s civic balcony and imposing doorway facing the Forum is the front of the building. The Forum, she said, was a disappointment with little architectural merit unlike the library on Ramsden Square, another product of our founding fathers and their incredible confidence in the future of the town.

St George’s Church was her next subject, built in Burlington Slate and sandstone, this time from St Bees. It is a little more durable than the local stone which was used in the Town Hall. This is the civic church for Barrow and warranted re-naming the site, formerly Rabbit Hill, to St George’s Hill. Across the road from the church is the former Railwaymen’s Club, in early years the railway station for the Furness Railway. It is now in a somewhat dilapidated state crying out to be restored and re-purposed to preserve it for future generations.

The John Whinnerah Institute was previously the HQ of the borough’s education department and was an elegant art deco building. Sadly, only the Abbey Road/Hindpool Road facade remains as the rest of the building was gobbled up in the development of a tinbox retail area.

Gill then moved on to social housing, describing how the local shipyard owners and the railway constructed significant housing estates for their workers. The houses in the case of the railway were principally on Holker Street, with edicices appropriate to the social status of the occupants; terrace property for workers, property with a small front garden for those higher up the ladder and so on.

Vickerstown on Walney has several layers of status on display. There are rows of cheek by jowl terraced properties, then some with small street side gardens, and finally roomier houses with elaborate fronts and even bay windows for the bosses !

Gill concluded her fascinating romp with a quick review of some of the carbuncles foisted onto the area and all too soon her time was up, with little time left for questions. Peter Garwood, pictured below with Gill and President Colin, proposed the vote of thanks. 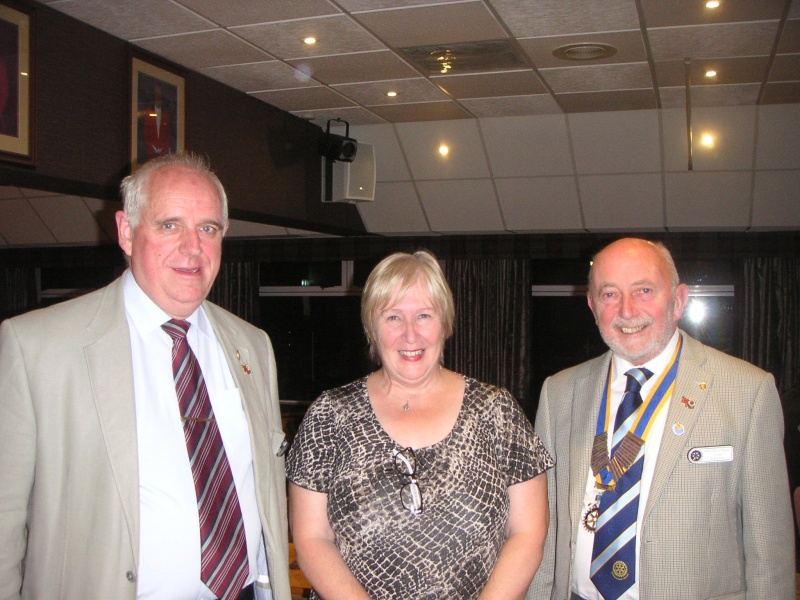