District Governor Mary Bradley visited the club, and her presentation showed her passion for Rotary and all it achieves. 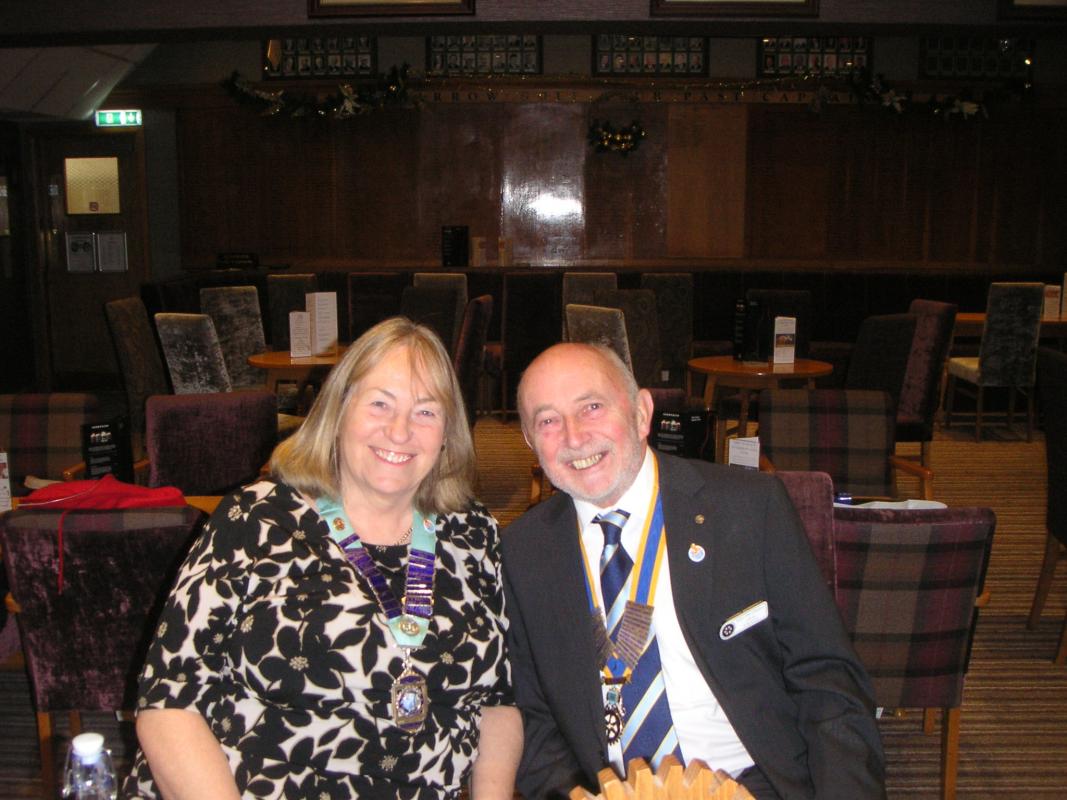 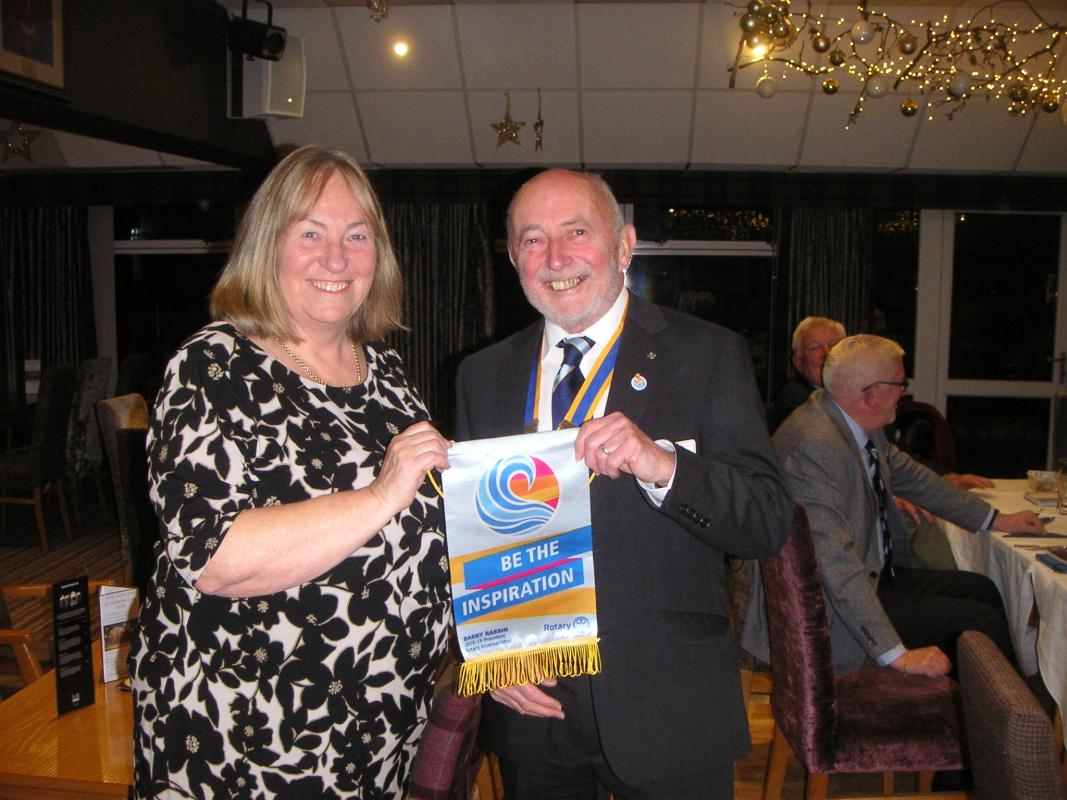 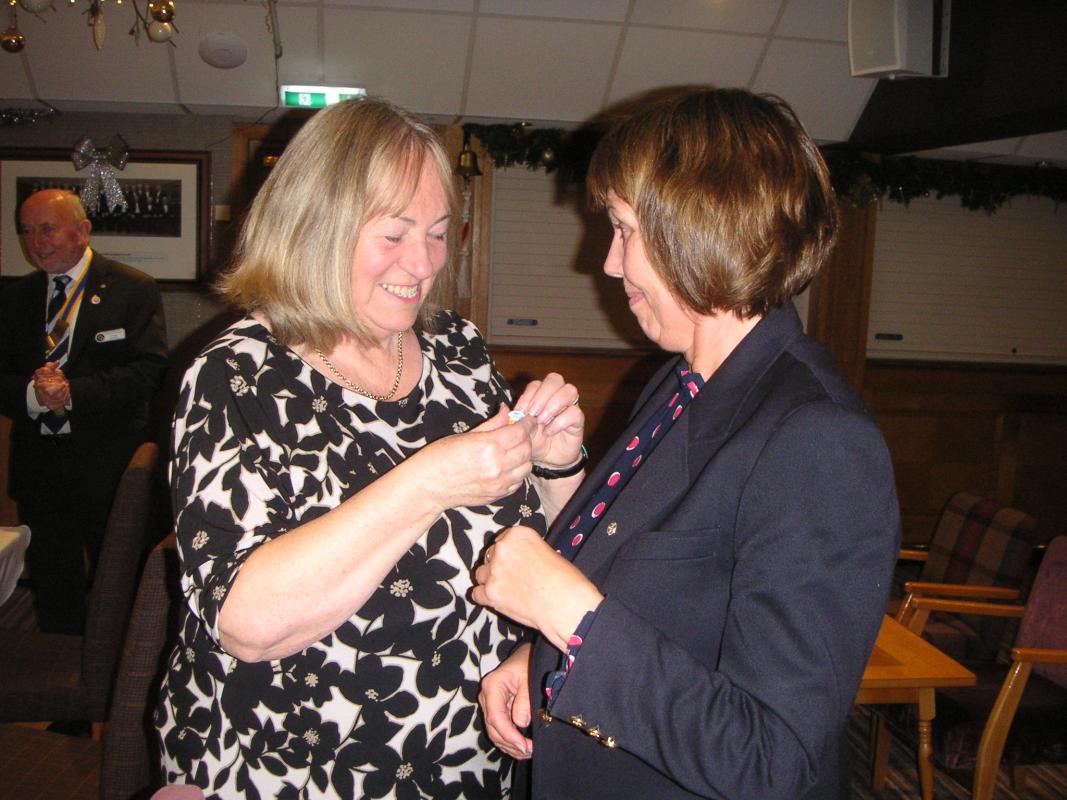 He asked that Club Chairs give a report of activity so far to give DG Mary an idea of what we have been up to. He reported on behalf of Peter Garwood who had had another function he needed to attend.

The reports concluded with one from our Almoner, who also asked Geoff James to update us on Ken Riley. Geoff reported that Ken, Silvia, Lorretta and himself intended to return together from Spain yesterday. Unfortunately Ken’s heart rhythm was too high and he was not fit to fly, but the good news now is further medication has corrected the irregularity and they will be coming home on their next available flight.

President Colin then invited DG Mary to take the stage - we even had a microphone set up - goodness knows how we managed that when Lawrence and Peter R were missing!

Mary first remarked on her previous visit which was our charter dinner back in the summerwith her abiding memory being the stupendous view of the sea and the Lakeland hills. She said that she had been greeted this morning by the first snow on Skiddaw which she can see from her home.

Mary said she had done her research on us as a club, checking out our websites (Rotary and Tour de Furness) and complemented us on our membership and noted that it spanned 4 (age) bands rather than 2 (upper ones) common in most clubs. That indicates sustainability over a number of years, by accident or design it is a good thing to have!

She spoke about our visit to Mafra (in Portugal) and remarked that she also had visited Mafra whilst on a walking holiday in the area and had a similar warm welcome whilst there.

DG Mary was pleased that we supported Shelter Box and said her aim for her year of office was to fund 100 Shelter Boxes. She said that so far we have had so many disasters in the world, that target may prove too easy! Following the recent flooding in Indonesia, Ambleside Club had arranged a quick street collection and raised enough cash for 3 boxes (lots of tourists about giving generously).

Also Keswick Club had arranged a Shelter Box village on a Lakeland mountain top which fascinated many hill walkers, especially the solar chargers which can keep mobile phones operating out in the sticks! There is now an option to also include a lamp in the Shelter Box kit, it is only an additional £10, but does make life much easier and recommended that all clubs do include it if they can.

Mary brought a banner which she told us had been inspired by the view from the RI President’s home in Barbados, the sun rising and setting over the waves of the sea, hence also the motto “Be the Inspiration”.    She then told us about the 5 “P’s”!

•    PROJECTS – keep active and involved.
•    PROMOTING THEM – make sure that when we donate money to a cause that we get mentioned in their annual report, newsletter etc. Also that we leave stickers on any physical things we provide “donated by …………..”.
•    PEOPLE BENEFIT – make sure that organisations supporting us know we appreciate their help, invite them to be “Corporate Members” or “Associate Members” – costs us nothing and who knows there could even be a membership benefit down the line.
•    POLIO – need to keep active on this, 35 million children had been vaccinated in Pakistan alone, just to show the scale of things!
•    PEACE – not just “Peace Scholars” but things closer to home, in her club they have a “buddying” scheme, might be elderly or lonely people, possibly with terminal conditions. A moment of two with them can give them peace.

On the 23rd February it will be the “World’s Greatest Meal”, which every club in the world will do. In our district they are producing placemats, which can be collected at the January District Council meeting. The idea is to take them round to hotels in our area and ask them to place them on the dining tables on the 23rd. The mats will explain our Polio campaign and invite contributions to the DG, and at a subsequent council meeting they will report on the success of the enterprise.

Mary also told us about our North West Magazine, whilst clubs said they still wanted it, she has struggled to get an editor and has had to take a different approach. Clubs will have online access to the printer and able to send their own articles in, up to 350 words and a picture. There will be minimal editing or more appropriately vetting, just ensuring legalities are satisfied  and we will see how it turns out, hopefully it will be successful.

In May we will be having a big, big promotion on awareness of plastics in the community and with 26 clubs on the coast there will be plenty of opportunities for beach cleaning.

In June there is the ride for Prostrate , and hopefully clubs will ride from one club to another to promote this event, Furness to Furness Peninsula is not too bad, Barrow to Millom (ok on Graham Parker’s electric cycle), Furness Peninsula to Ulverston (might have to do that in relays - David & Val or on tandem).

In closing Mary talked about the Rotary Songbook, Colin breathed a sigh of relief that we were not being invited to sing. The DG said her favourite song was from her favourite group “Queen” – “Don’t want to stop having a good time” and she did not!

Mary's presentation brought hearty applause from the members present, with many of them saying that it had indeed been an inspiration.