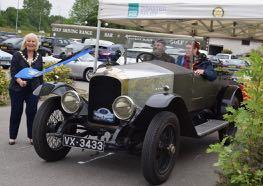 Helen Carmichael, Provost of Inverness, flags off the oldest entrant, a 1922 Vauxhall 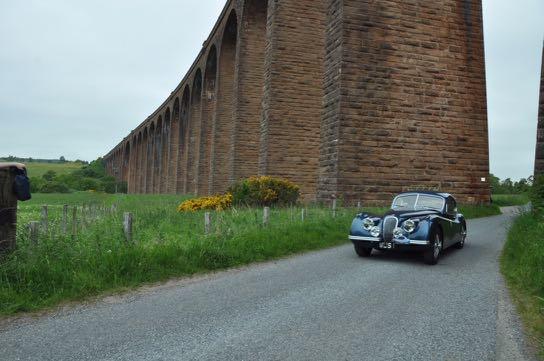 “What an enjoyable day”, ”imaginative route” and “great roads” were just some of themany favourable comments from the entrants on the recent (June 9th) and second Loch Ness Classic Car Tour, organised and run by the Rotary Club of Inverness Loch Ness in aid of charity, principally the Highland branch of Children 1st, much

to the delight of fundraiser Jane Clunas.

Befitting a classic car tour, the entry list revealed a range of cars covering some seven decades of motoring, the oldest car the 1922 Vauxhall 23/60 of Mike Holt & Susan Torrance which was driven up to

the Highland capital from Stirlingshire and took in the

100 + mile route of the tour in its stride! Ian and George Keir had their pristine 1948 Rover 75 and vying for attention was the beautiful 1951

Jaguar XK120 FHC of the McWhirters, resplendent in its Ecurie Ecosse blue paintwork. Famous marques continued to appear at the start carpark, the Clarks 1955 Daimler Conquest Century saloon, with sons Kyle and Aaron sharing Kyle’s 1963 Rover 110 after Aaron’s Triumph Spitfire succumbed to mechanical gremlins. John Eastwood’s 1969 Bond Equipe GT certainly caught the eye of the public as did the highly desirable 1985 Audi UR Quattro Coupe of Richard Fraser. With the organisers permitting more modern cars “of a sporting

nature”, no less
than three mouth-
watering Italian thoroughbreds lined up, the Dalgetty’s Alfa Romeo 4C Coupe, the George Mackenzie/James Campbell Fiat 124 Spider and the Ferrari 360 Modena of Charlie and Annette Munro, all three emitting exhaust notes to delight the senses of any“petrolhead”!

From the start at Fairways Leisure in Inverness, the route took the entrants east towards Nairn and

Auldearn before heading onto some little known single track roads in deepest Nairnshire, indeed a number of local crews had never travelled them before, and an early bit of excitement was the crossing of the Muckle Burn at Fornighty Ford near Lethen. Following a relaxing meander through areas of birch trees and pine forest, the crews omitted a visit to Dulsie Bridge (on safety grounds) by turning right and following the

course of the River Findhorn as it snaked its way down from Drynachan, a most scenic run which also gave the drivers the opportunity to “stretch their legs” a bit as

they headed back north!

More tree lined roads followed through both Cawdor and Dallaschyle Woods before the cars turned west high above the River Nairn, heading west before dropping down under the mighty 29 arch Culloden Viaduct on their way to a welcome lunch halt at The Dairy at Daviot, a very popular restaurant.

Following a relaxed lunch and a chance to build acquaintances, the entrants set off on Leg Two, a

relaxed drive up Strathnairn through Croachy towards Errogie, by way of a couple of single track scenic detours, the second of which saw the drivers

“disputing ownership rights” with dozens of sheep and lambs around Carnoch Farm, the animals seemingly most reluctant to vacate the warmth of the roadway! Amicable settlements were achieved on all occasions and the sheep reclaimed their domain following the passing of the last car. From Errogie, the route then dropped down to Foyers via Loch Bran before heading north-east along the iconic

Loch Ness (monster spotting optional!) before turning right at Dores village and then a final run over Ashie Moor to the Fairways Leisure finish.

That the Tour was successful was in no doubt and as Rotary Club President John Considinecommented “a lot of work has gone into the organisation of the Tour and we’re delighted that the entrants have enjoyed their day with us in pleasant weather and great scenery and also in raising just under £4K in sponsorship, a magnificent effort, and our appreciation toall”.

Already the Rotary Club Tour organisers are looking ahead to the 2019 Tour which will be taking to the roads on Saturday June 8th and already some interesting and scenic routes have been identified. Information will appear on the Tour websitewww.lochnessclassiccartour.weebly.com in due course.