Three of our Club membrs  join with the

Rotary Club of Warrington at their 100K Meal Pack event. 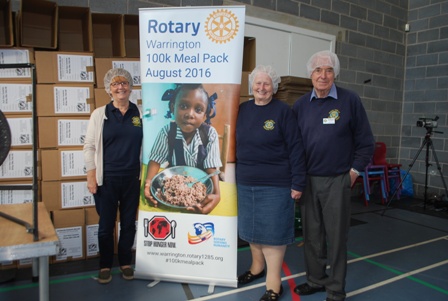 During the morning session, the group of Rotarians produced 50,000. 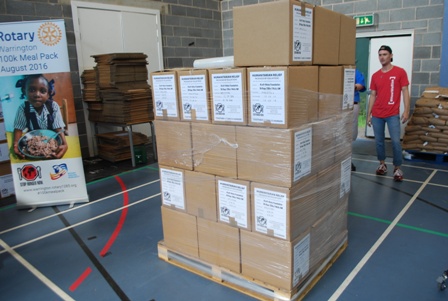 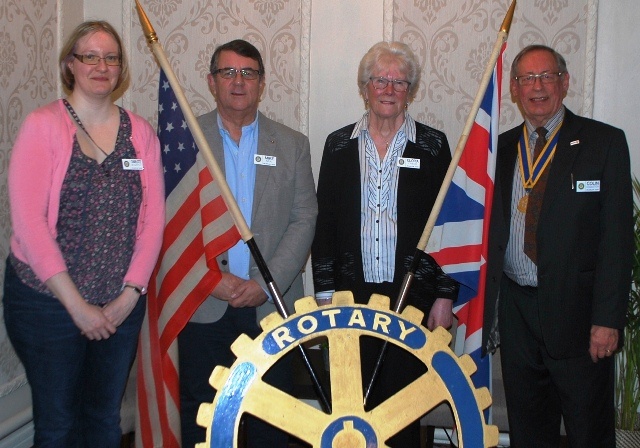 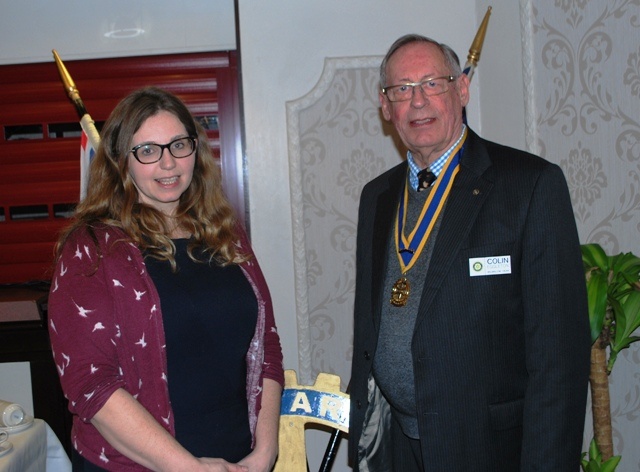 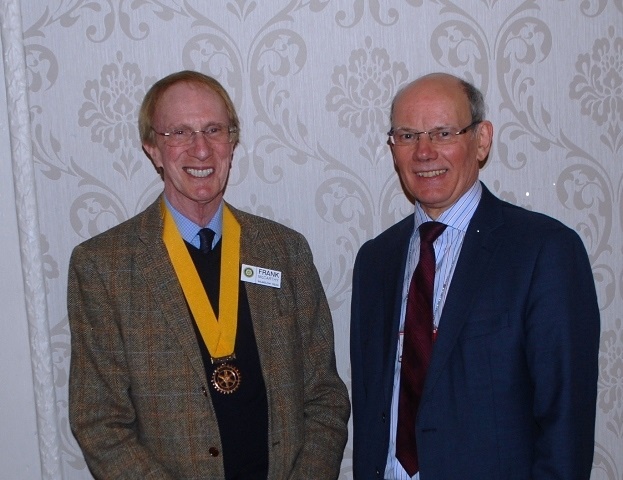 Tuesday, 28th March - Mark Conway Project Director for the joint venture consortium, and Sue Stevenson representing the client - Stockport Council, below, with Vice President Frank, gave a very detailed update on the progress of the SEMMMS relief road, which will run from Manchester International Airport to the A6 in it's present form, and hopefully extending to the M60 in the future. 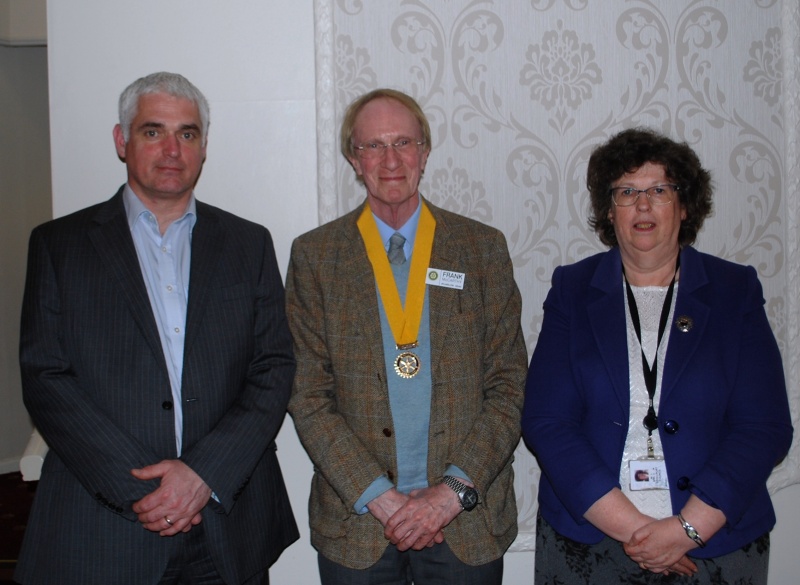 Rotarian Reg Lord blows his whistle to start the swim. 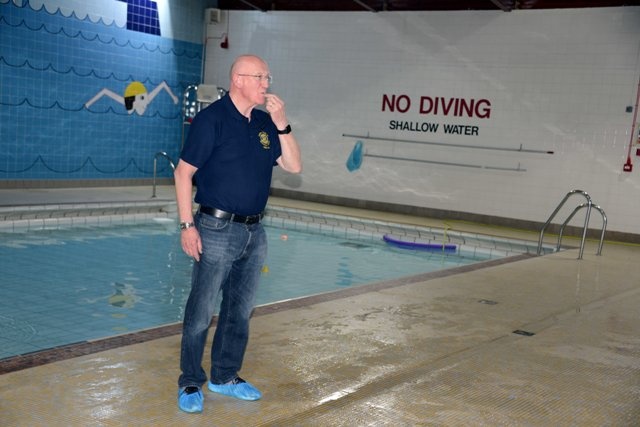 Some of our swimmers with their certificates. 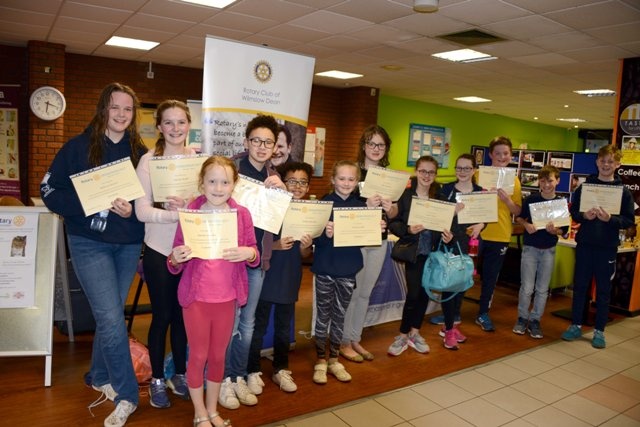 Some of the organising Rotary Team 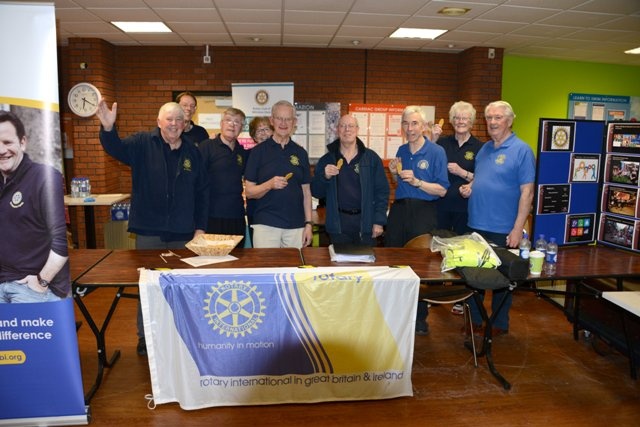 Some pictures of the surrounding buildings 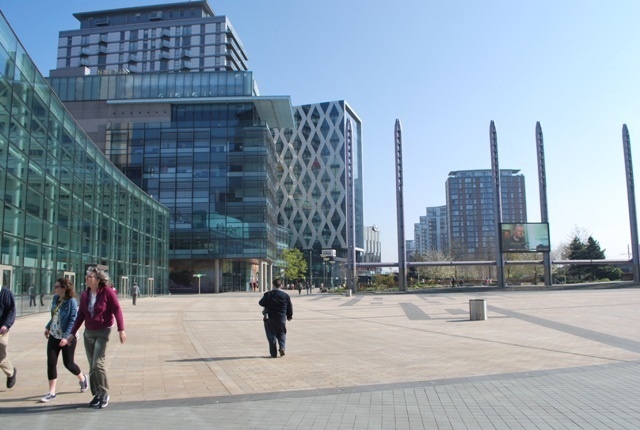 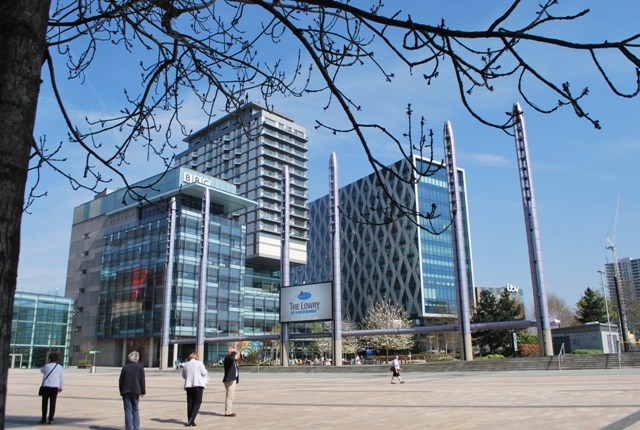 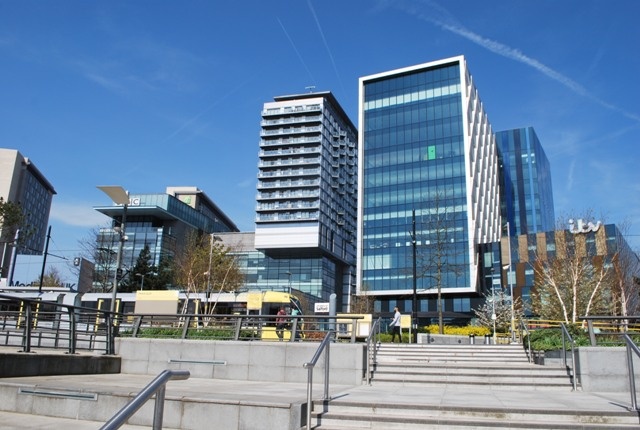 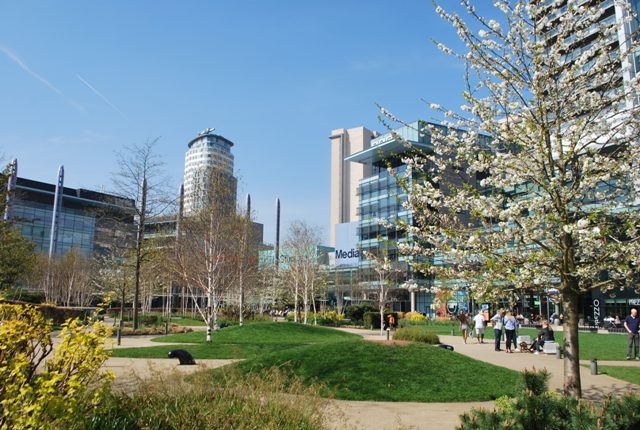 Many well known shows are set in this fully equipped studio. 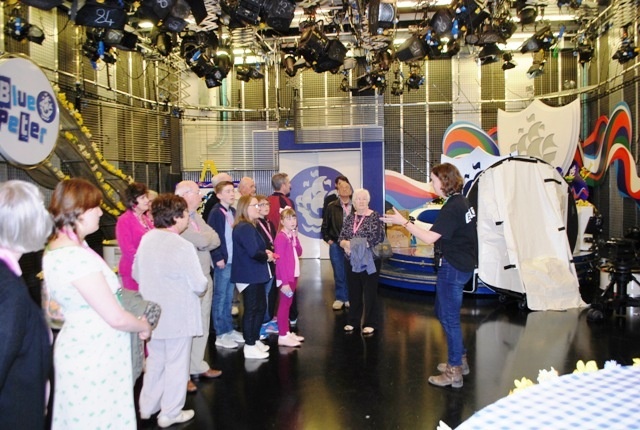 Note the props for Blue Peter. 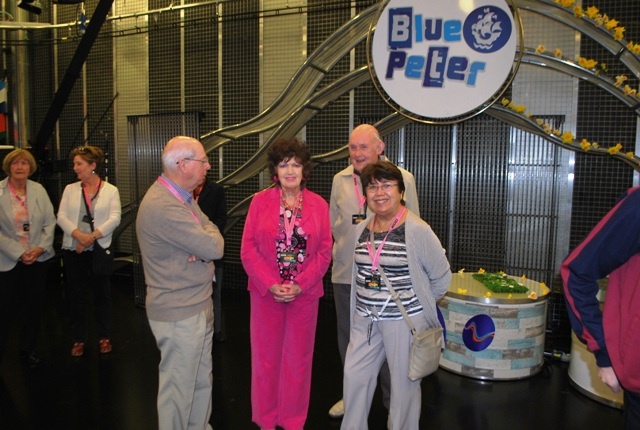 One of the audio control desks. 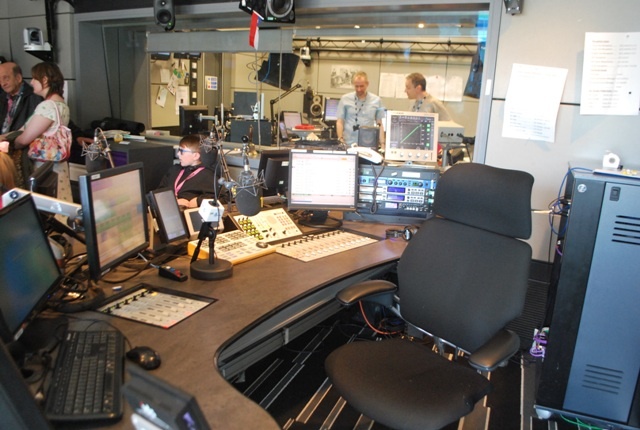 Mike Ramsden about to present the weather forecast. 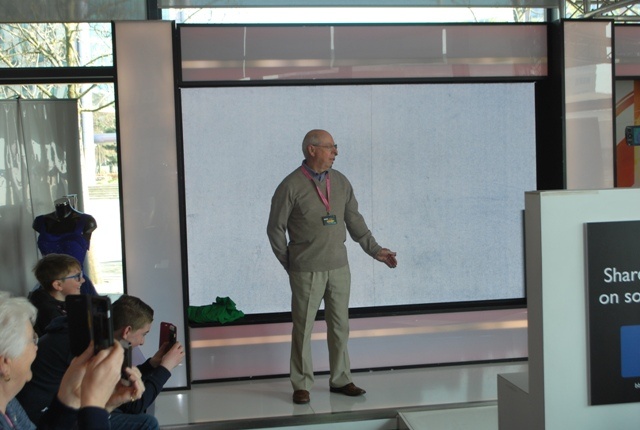 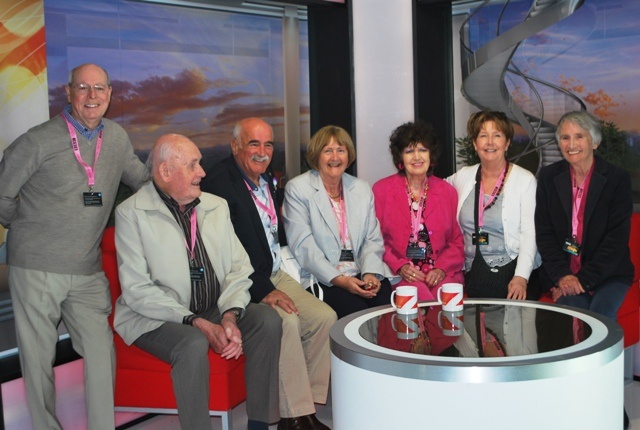 A short break after an enjoyable tour, thanks to the BBC guides. 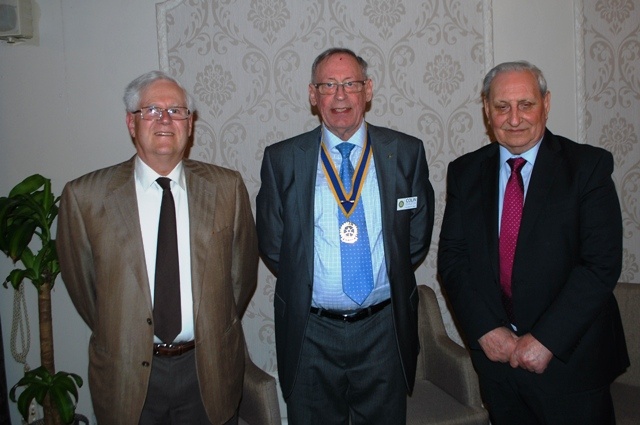 2nd May, we hosted the District Annual Scholar's Dinner

Both our guests gave a presentation depicting the international work they had undertaken during their studies. William recounted his experiences in Mongolia, and Sasha hers in Ethiopia 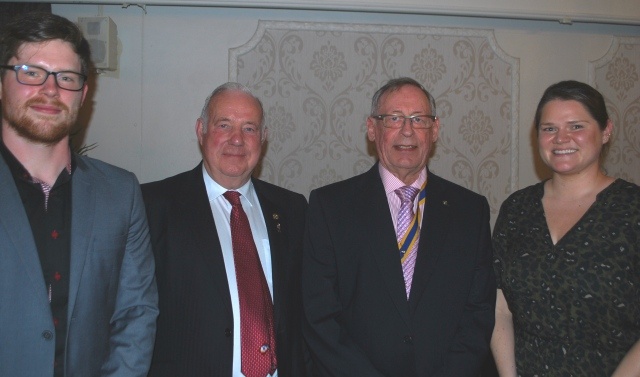 This evening we had an illustrated talk on the history of Boat Trains in the Northwest of England, from John Hooley, ably assisted by his wife. 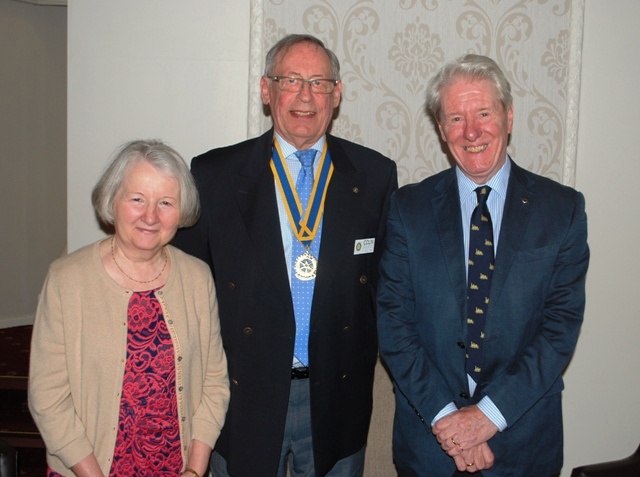 Our club arranged and hosted this annual event, held at the Deanwater Hotel.

Below, with the winners cup are Thomas Radnall, Erin Corcoran, Best Vote of Thanks, Isabelle D'Arcy, Best Speaker, with President Colin Eggleton and Headteacher Mrs Pollard. 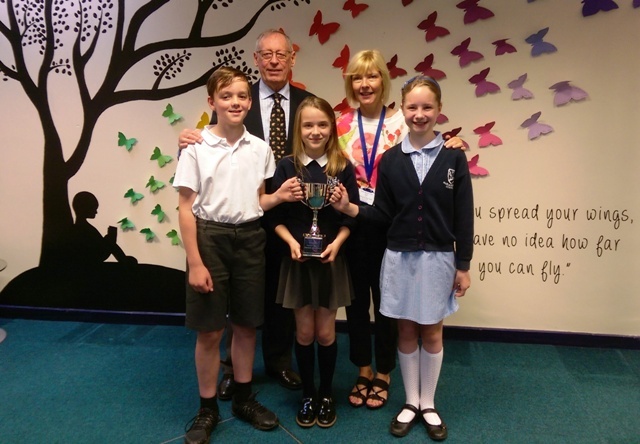 This Year, we supported the Great Get Together, at our Garden Party held in Marianne's garden on a wonderful sunny summer day. 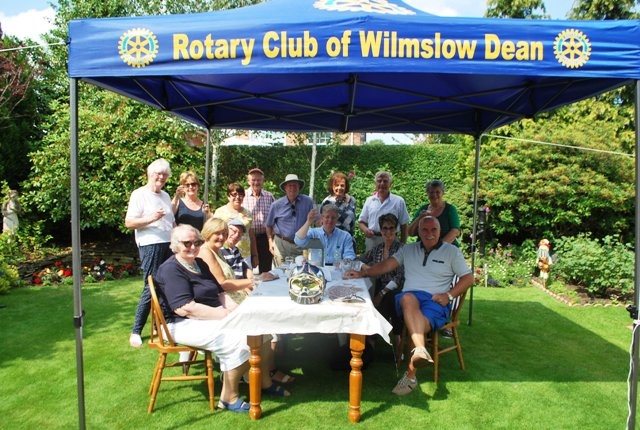 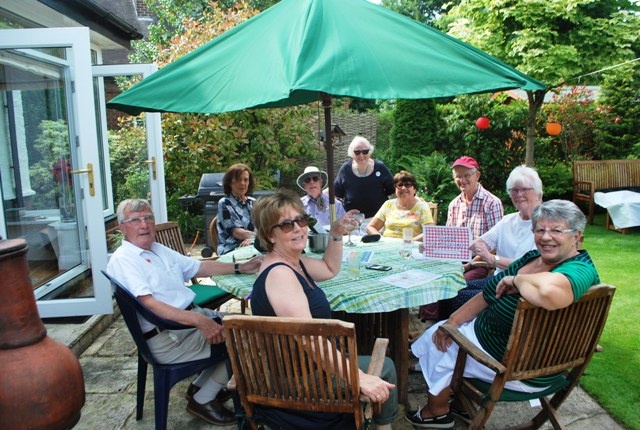 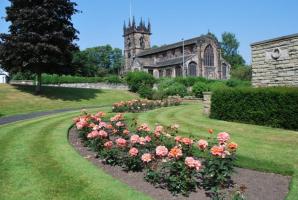 more This shows details and photos from our main events and activities in 2018/19 starting and ending with the Rotary Scarecrow Festival after a photo of our Rose Garden.

more The Teddy Bears' Challenge event from June 2015. Held at the 'Party in the Park' organised by Wilmslow Town Council

Not the Beaujolais Brunch

more The Club's "Not the Beaujolais Breakfast"

Not the Beaujolais Breakfast (2011)

more Not The Beaujolais Breakfast meeting ...

more Partication in the Wilmslow Street Party to commemorate the Royal Wedding.

back Details and/or photos of a selection of past events and activities.