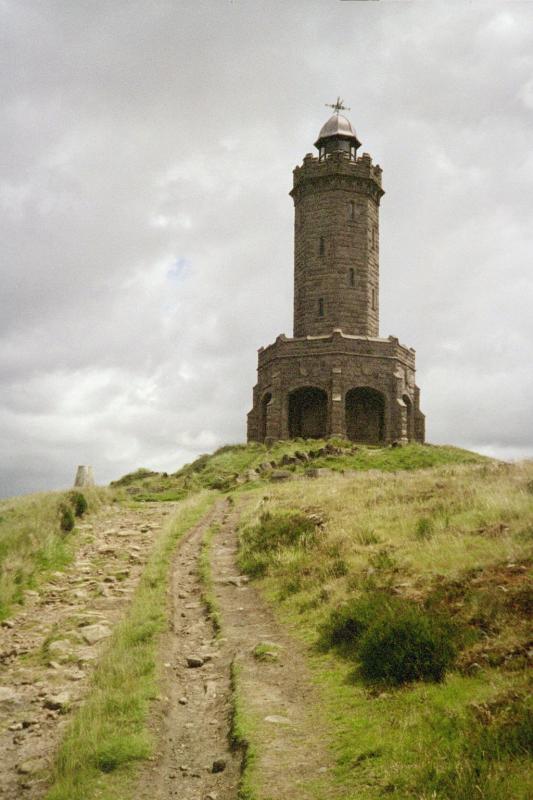 The Darwen Tower was erected 120 years ago to celebrate Queen Victoria’s reign of, as then, 60 years hence the name Jubilee Tower and to celebrate the victory of local people to the right of access to the moors.

It was erected by public subscription was opened on the 24th of September 1898. It was designed by R W Smith-Saville. It is 25.9 metres tall (85feet). Views from the top take in North Yorkshire, Morecambe Bay and the Lake District, Blackpool Tower, Isle of Man, North Wales and Derbyshire.

The Tower is very exposed and has suffered over the years from weathering and vandalism. The top of the tower was blown off in 1947, 1971 and again in 2010. It has always been replaced and the last time it was with a coated stainless-steel replica kindly donated by WEC Limited a local company and was delivered by helicopter.

The weathering has now reached a point where the fabric needs some extensive attention and the Darwen Rotary Club have set themselves the task of raising £100,000 to enable the work to be carried out. To date £75,252.79p has been donated.

It is anticipated that the cost of renovation will be higher than this and a joint application was made by the Rotary Club and Blackburn with Darwen Borough Council to the National Heritage Lottery Fund to help with the repairs. Regrettably this was not successful. The Fund did not award a grant this time round.  We will be meeting with them to discuss the weaknesses in the application and we have been told we can apply again next year.

Donations can be made at the collection boxes attached to the Lego Tower in Darwen Market or by cheque payable to Rotary Club of Darwen and remitted to Gorse Barn, Rock Lane, Tockholes, Darwen, BB3 0LX or by visiting our Just Giving page

October 2019  The Tower Restoration Fund is now registered with the Darwen Co-Op Community Fund.  For the next 12 months, people registered as members will have 1% of their bill credited to the Tower Fund when they shop at the Co-Op.

To register go to   https://membership.coop.co.uk/new-registration.

November 2019  As part of the project a video has been produced for distribution to schools as has a podcast giving some detailed history of the struggle for the freedom of the moors and the building of the Jubilee Tower.

These are designed to increase people's understanding of the significance and history of the Tower and should help as evidence for the Heritage Lottery Fund application.

They were launched at a public screening at the Darwen Library Theatre attended by over 200 people. 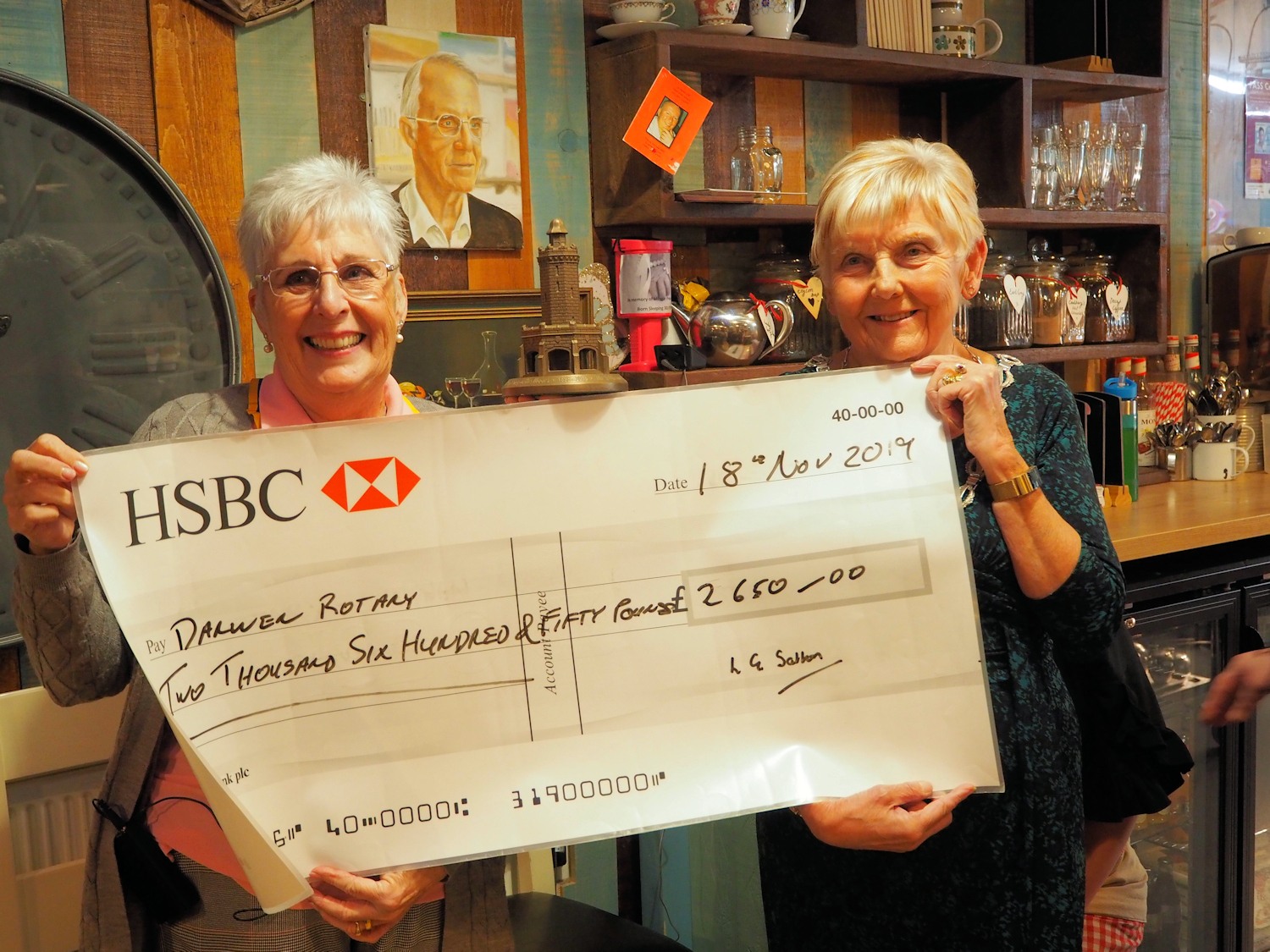 The Mayor of Darwen Cllr. Lillian Salton presented a cheque for £2,650.00 to the fund.  This was the proceeds from the bucket drop at the Town Bonfire. 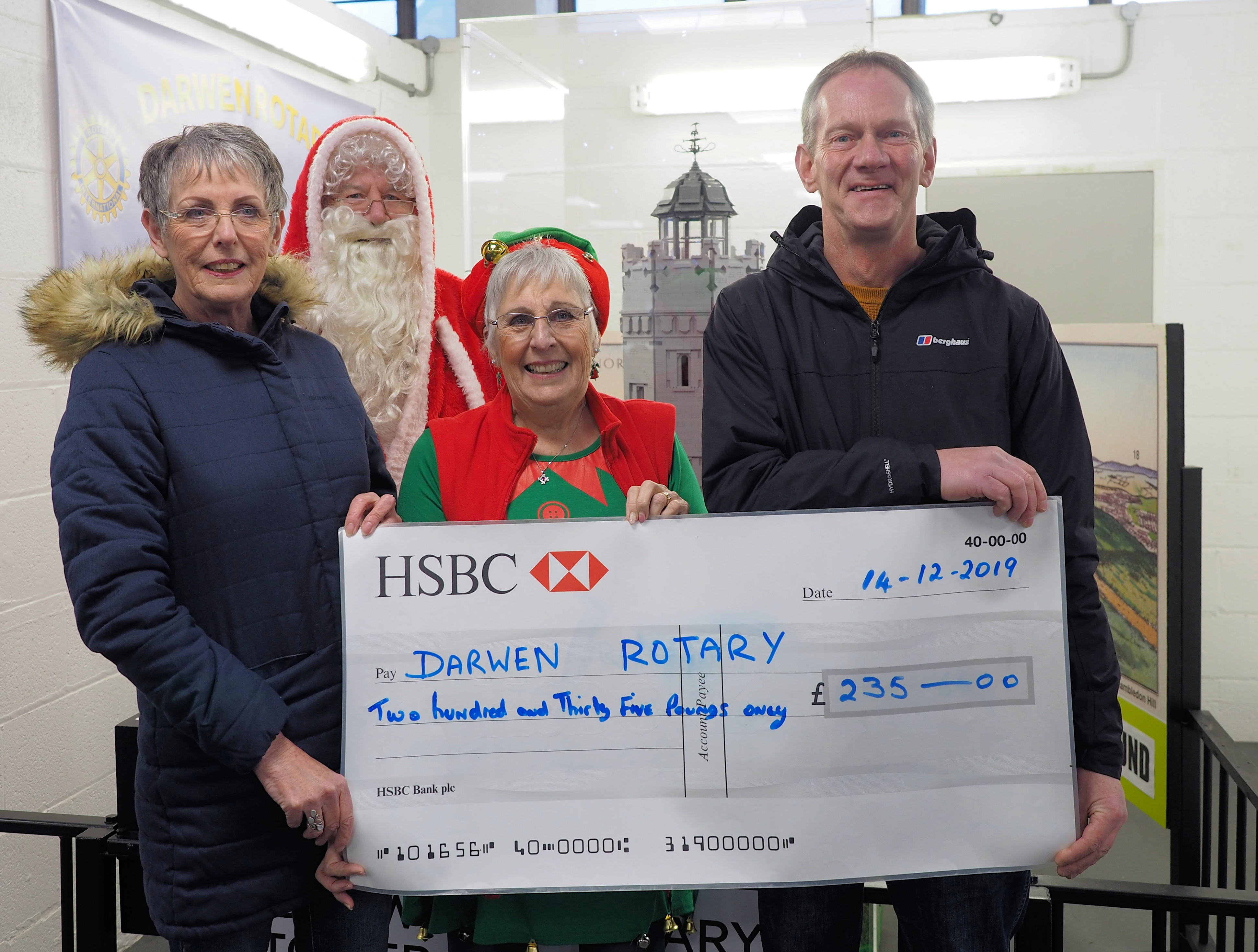 Stef Wolski and Brian Entwistle present a cheque for £235 raised from the sale of her photographs of Darwen Tower.