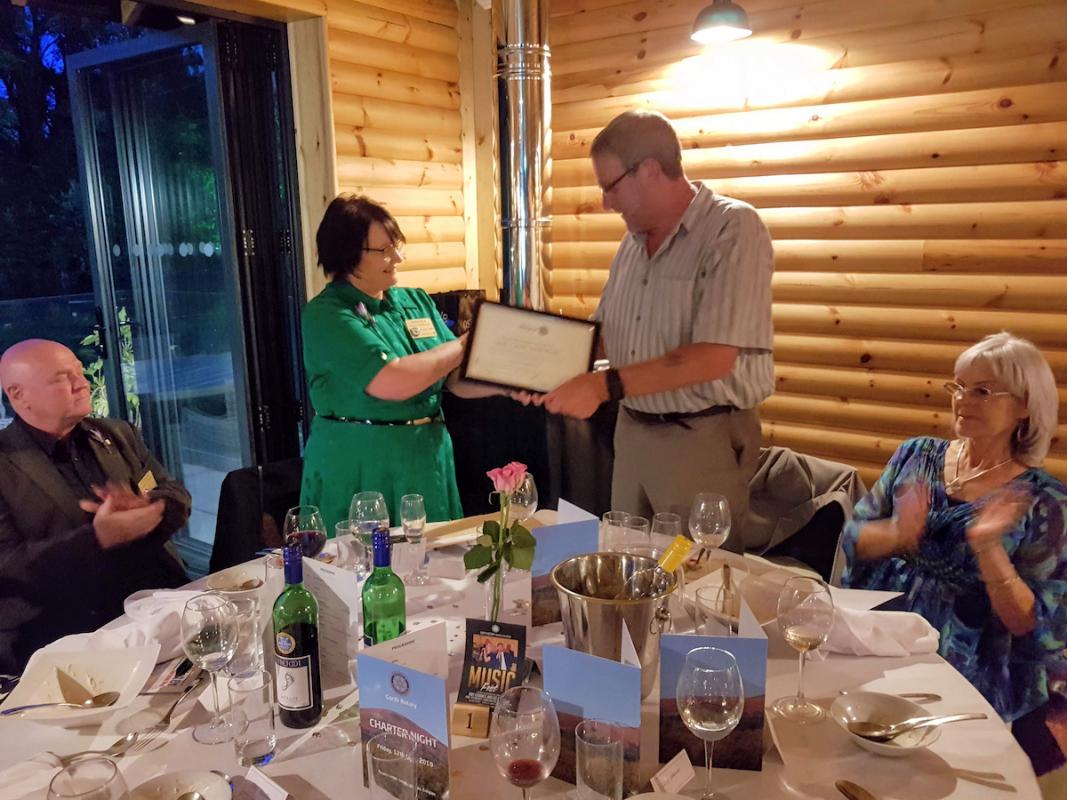 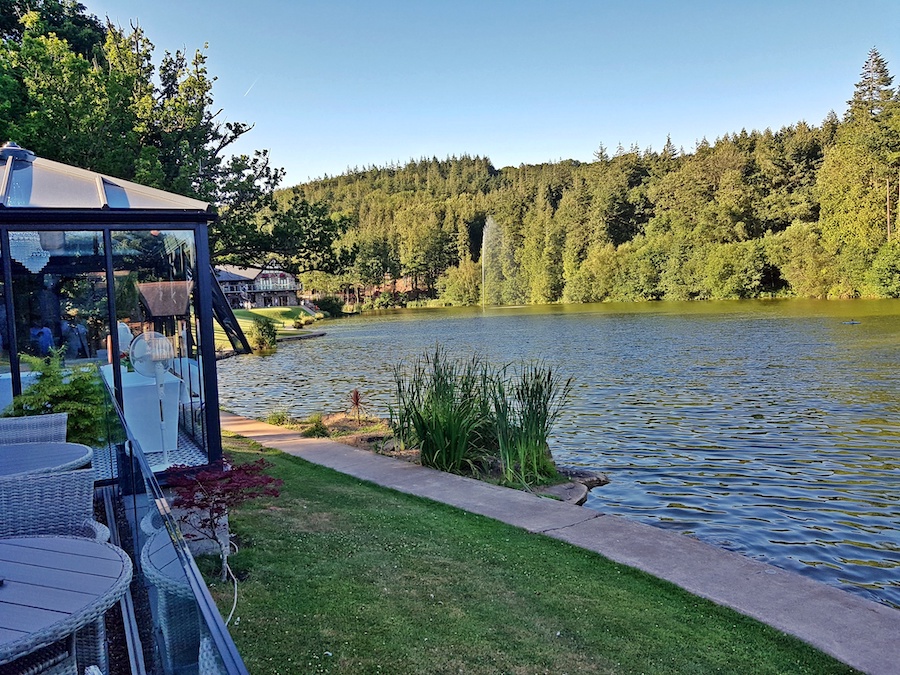 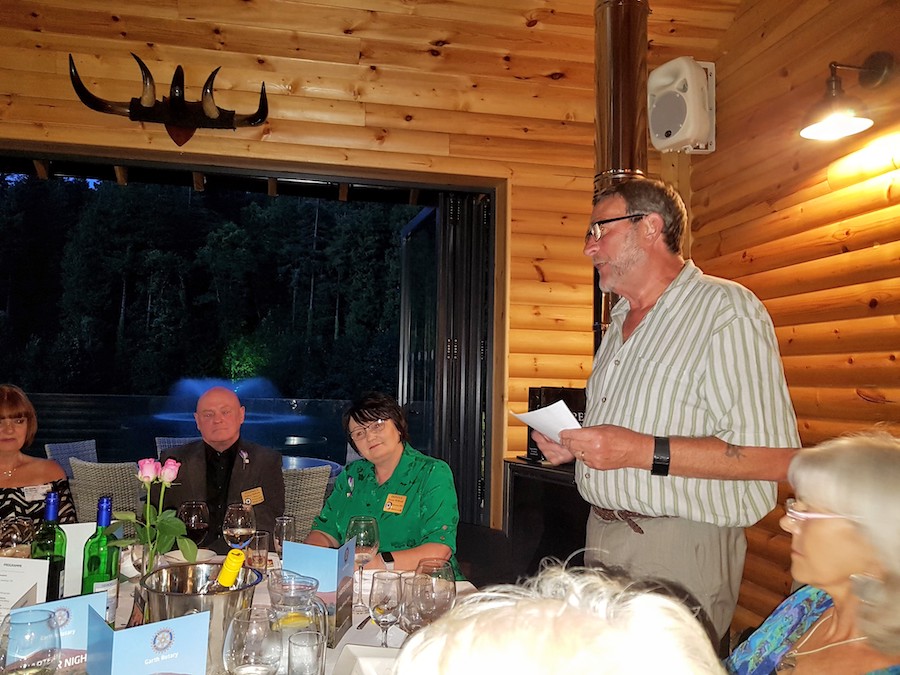 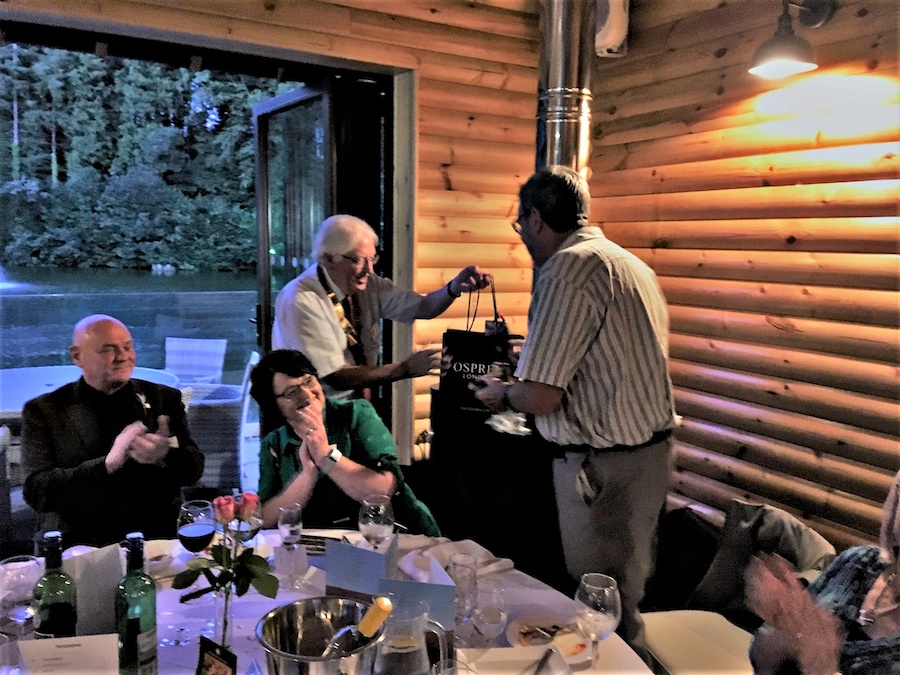 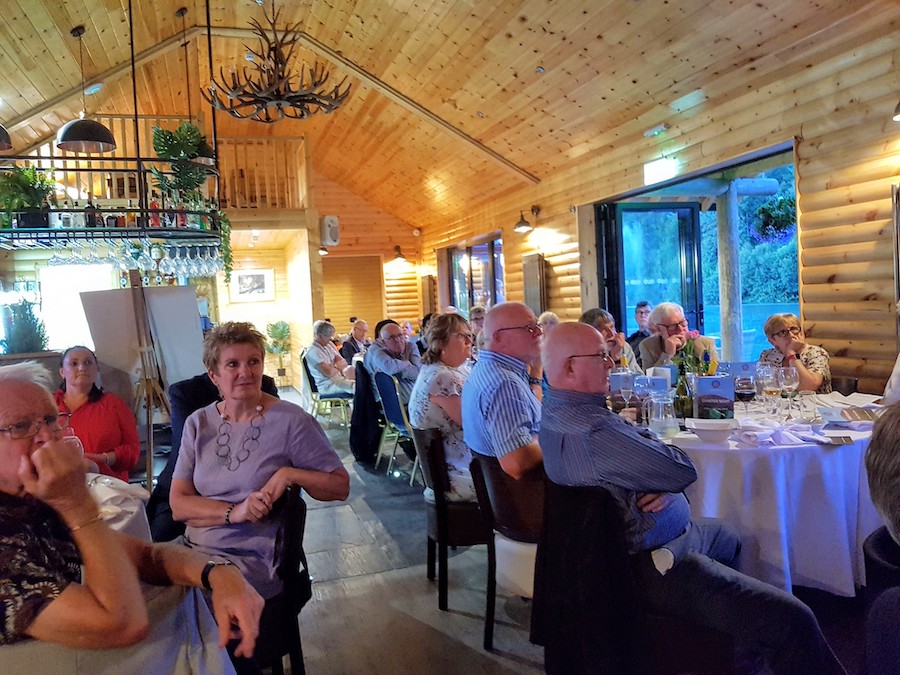 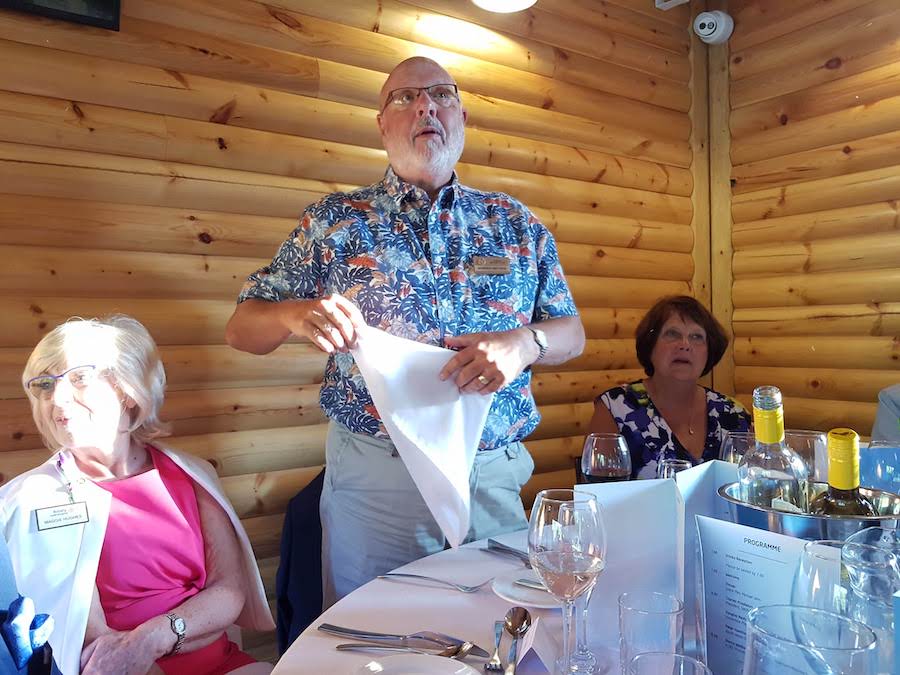 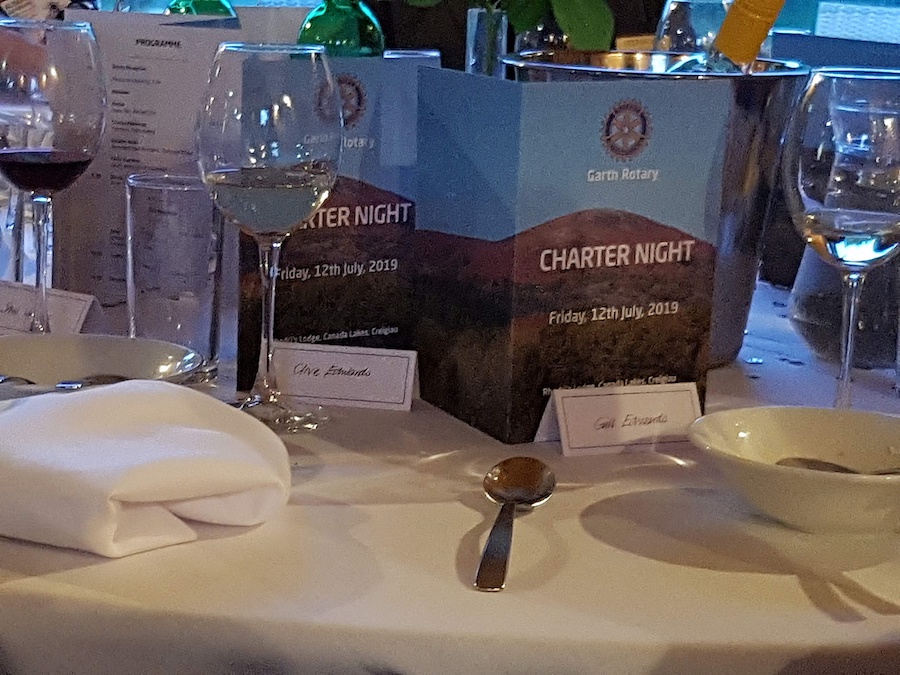 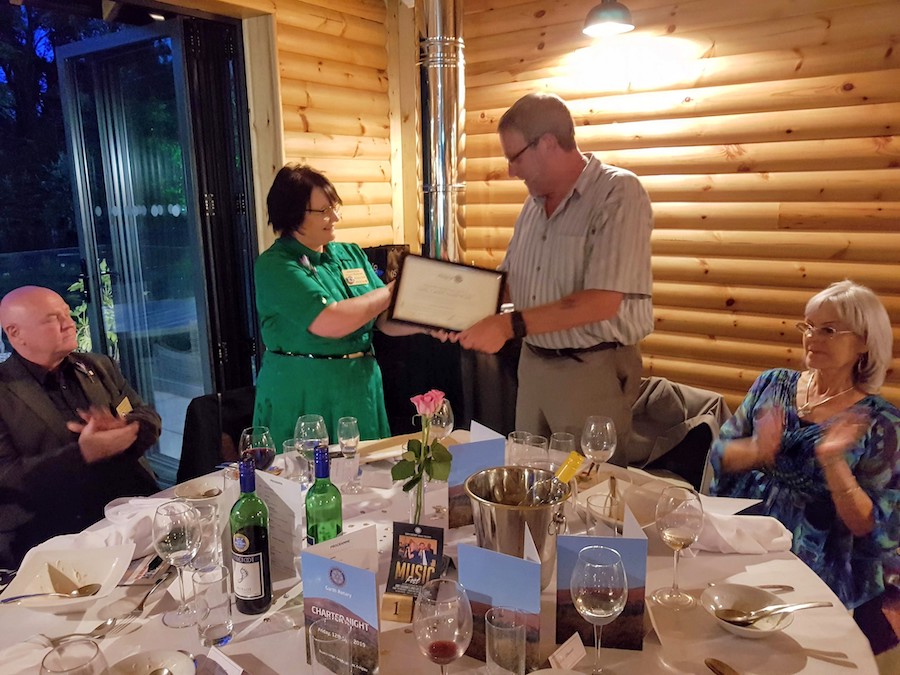 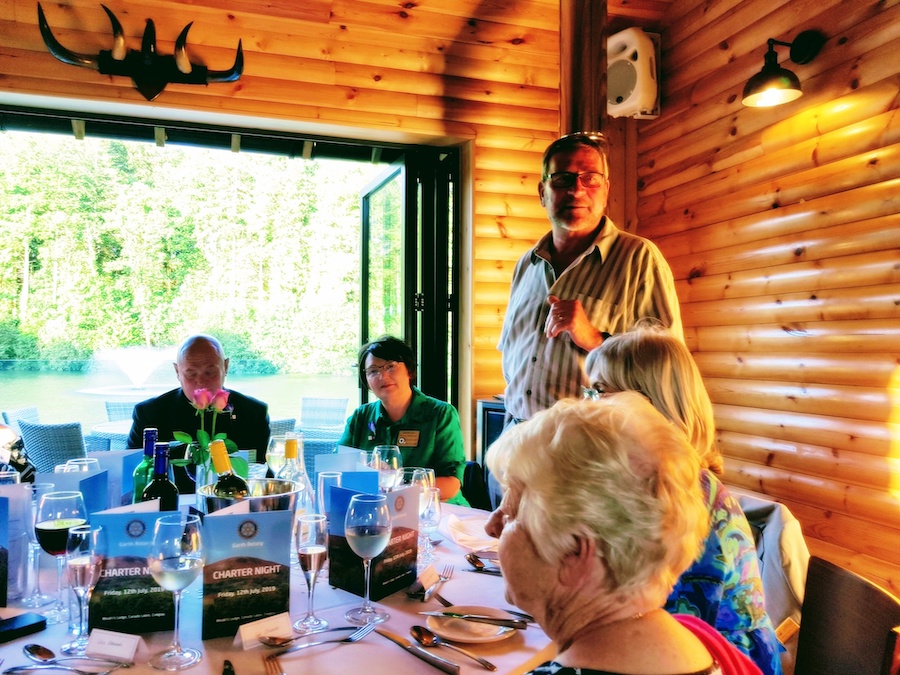 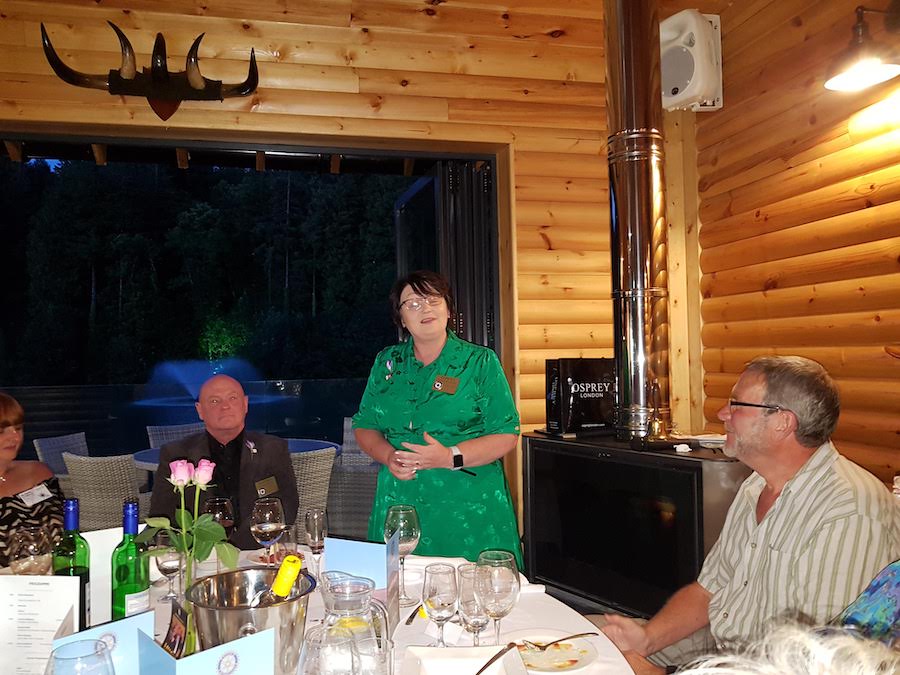 
Friday July 12th at the beautiful setting of Canada Lakes, Near Cardiff, South Wales, District 1150, saw the chartering of the first club in Rotary GBI in 2019/20. The event was attended by members of the mother club, Chelwood Bridge in District 1200, several members of the relative District teams including DG Peter Hamilton and DG Dennis Stevens.
Founder President Charles outlined the history of how the club came to be formed and poke also of the many achievements in its short life as a Satellite club to Chelwood Bridge. Chelwood Bridge Immediate Past President Douglas outlined how proud he was of the formation of a new club with 25 members and more to follow shortly.
We were delighted to have with us Rotary GBI President Donna Wallbank and her husband Steve as principal guests. Donna welcomes all the member to the family of Rotary and wished them well in the future.
Chelwood Bridge President Mike presented Charles with a bell as a gift from the club to enable him to keep order!  The evening ended with local entertainment and a sing a long

Looking back while Leaping Forward

(The Birth of a New Rotary Club)

When in 2017/18 Charles (Middleton) and I first started talking about Rotary and the possibility of him becoming a member of a Rotary club he was a little apprehensive.
That is until I explained that Rotary as an organisation had gone through a number of changes. These changes while keeping the core values of Rotary had embraced the concept that all clubs need not have the same structure, dress code or event schedule. These changes were embraced in the concept of Satellite Clubs.
If it hadn’t been for a chain of events, this conversation would not have taken place nor would the creation of a Satellite Club in one district (1200) lead to the Chartering of said club in a different District  (1150) in eighteen months. For a few weeks prior to this conversation I had been invited by the then Governor of District 1200 and member of my Club, John Butler to attend a meeting in Street where a Rotarian from North Wales was giving a talk on the advantages of embracing the Satellite model to grow Rotary.  On the way home John and I discussed this concept and agreed what a wonderful opportunity this was to grow a club. For try as we may to attract members to our own club, having an average member age of 72, meeting every week, and enjoying a meal together in what may well be called a traditional Rotary club atmosphere does not appeal to many younger potential members who have time commitments and other priorities.
( But I digress  ) back to my conversation with Charles.
This lead to Charles and a few like minded friends visiting our Club in Chelwood Bridge and discussing the possibility of forming a Rotary Satellite Club in the Pentyrch/Creigiau area of South Wales under the guidance of Chelwood Bridge. A club with not one but two past Governors (John Butler and Tony Quinn) and a number of members active in the work of the district like Mike Hedges and the founder of Water Survival Box, Hugo Pike. So it was with the full backing of the members of Chelwood bridge that we took on the unique challenge of offering to sponsor the Satellite status to a club physically located outside of our district.
Little did we know at that time that the Satellite Club known today as The (Y) Garth would grow so quickly in membership numbers and at the start of this Rotary year 2019/20 leave the Mother Club and gain its Charter as a new Rotary Club in South Wales.

This has come about due to much hard work by Charles and the members of Y Garth who quickly grew from a handful of friends to a vibrant active club with 24 members and the fellowship and guidance of Chelwood Bridge Rotary Club.
So it was with great pleasure that 6 of our club members on the 12th of July together with our present District Governor travelled across the seven bridge to see our first Satellite club Charter and become a Rotary club in its own right and the first Rotary Club in the U.K. this Rotary year to achieve Charter Status.
We wish them well while still embracing the Satellite concept by continuing to support our clubs second Satellite Club, Cam Valley that presently has 11 members while our own club in the same period has attracted 4 new members. Showing by embracing the new a club in a rural part of the UK can still attract new members even if to some they resemble “Dads Army”
The future is looking good for the growth of Rotary all you need is lateral thinking.