Finn McCowen from Winford is an 8 year old boy who has quadriplegic cerebral palsy but despite his disabilities he loves adventure, particularly outdoors. With his disabilities he has limited functions but remains bright and energetic but all this makes life very frustrating for Finn who is totally reliant on his parents, Sarah and Dougie. One of his greatest loves is visiting the seaside and going out in a canoe with mum or dad however as he gets older and heavier they are finding it more and more difficult to lift him. To help, not only with this outdoor activity but also going on country walks with the family and their dog and other exercise, the family identified a specialised all-terrain wheelchair called a Hippocampe would help them immensely. This is an expensive item and unfortunately, the family could not get funding from statutory agencies.

Chelwood Bridge Rotary became aware of the family and their needs and agreed to help raise the necessary funding though crowd funding on the GlobalGiving platform. The crowd funding was over a fairly short period but through promoting this via social media and contacts it was a great success raising some £4,000 from 138 donors.  In addition to the crowd funding Keynsham Lions Club also donated £500 meaning that not only could the McCowen's purchase the wheelchair and various accessories but also have funds to go into Trust for Finn's future needs. Rob Taylor from Chelwood Bridge Rotary said “This was our first experience of using GlobalGiving for crowd-funding and we were delighted with how smooth it all went. We have been really pleased to help Finn and his family where, despite the difficult times we are living in at present,  the public came through and were more than generous"

Sarah McCowen said " We'd like to say a heart-felt thank you to Chelwood Rotary for organising the fundraising campaign and to the donors (from all over the world) who so kindly gave money to support Finn.  The Hippocampe matches very well with Finn's enthusiasms: speed, adventure, exploring, being outside and the sea.  Finn lights up when we put him into it,  and often tells us (with gestures and vocalising) that he wants to go in it when he sees it around the house.  With the skis, the beach wheels, and being designed for saltwater immersion, it's three or four exciting gadgets all in one.  It's light and manoeuvrable, a pleasure to push and it can go just about anywhere.  It's even perfect for walking our dog with Finn holding the lead.

We're looking forward to taking it out in the snow to try out the skis and to getting onto the beach, and even into the waves, when the warm weather returns." 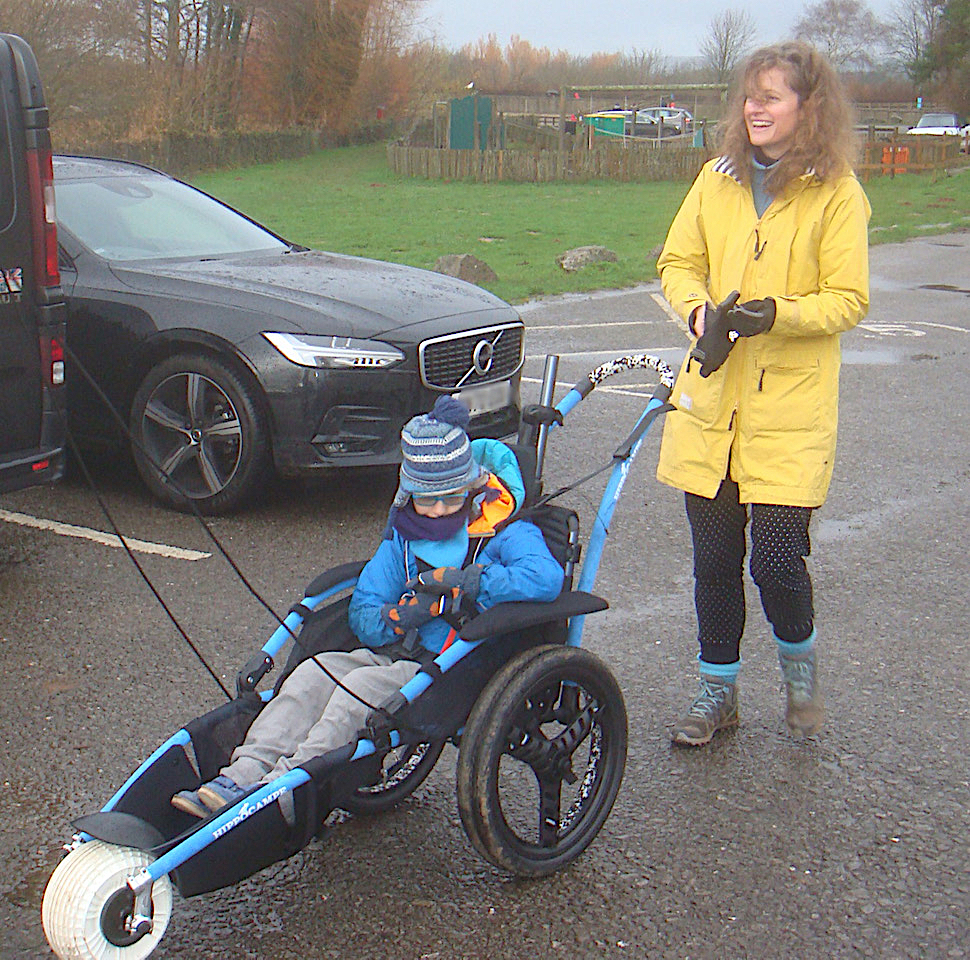