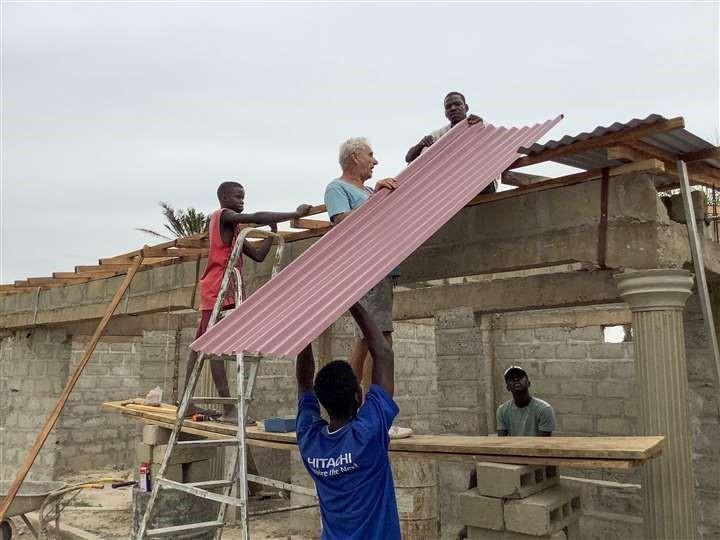 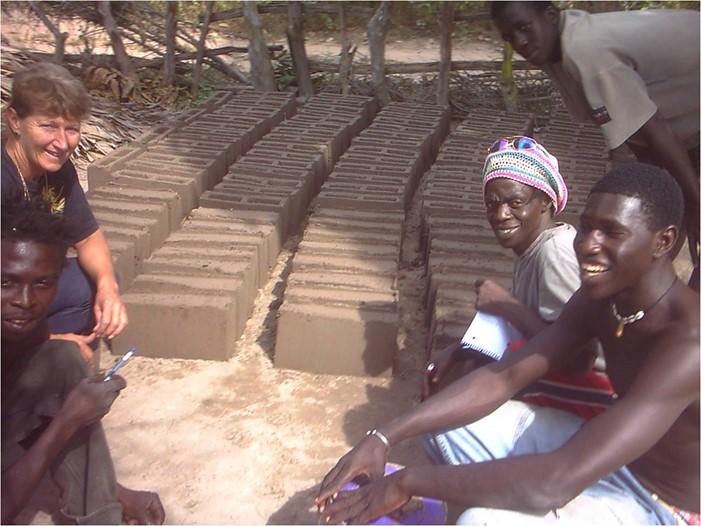 This is an amended extract from the Cambridge Independent

John Martin in The Gambia with local volunteers

The Bantaba Project (Bantaba means 'meeting place' in the Mandinka language) focuses on helping people to help themselves, strengthening communities through education and training workshops in order to tackle issues of illiteracy, health and poverty.

The project, started by long-term resident of The Gambia, Rose Dawson, who has been responsible for the project, the accommodation has been built and the nursing facilities, workshops and a community centre for arts, crafts and education is the next phase.

The Bantaba Centre is located in Saloum Daba, Madiana, about a two-hour drive - mainly on dirt roads - from the capital city, Banjul. Rose has been helped a great deal along the way by friends and family and especially her sisters, Hazel Dawson, and Irene Childerley.

Irene, a resident of Little Abington and a past president of Cambridge Sawston Rotary, said that her sister Rose first went out there in the 1980s and "just fell in love with it" and calls this African country her second home. She came back to the UK last year just before the Corona virus pandemic was really starting to 'take off' and she decided to stay and use the time to fundraise and plan the next steps - at least until the world returns to some sort of normality when she can return.

Irene, who has played a key role in logistics, organisation and networking for the Bantaba Project, says that Rose - a former lecturer - has "always wanted to reach out to the people that have no opportunity," adding: "There are schools out there but the problem is that when they're 14, 15, they leave with few skills and no employment. "So unless they're quite rich, they can't afford for the kids to go to high school - so the project is really for those kids who have left school who've got no trade. It's really basic skills that will help them rebuild their villages and give them some employment."

Rose with local volunteers – all bricks have to be made by hand.

Irene Childerley with members of the Rotary Club of Fajara. Far right is Minyan Jobe, past assistant governor of the Rotary of the West Africa District

Irene says Rose used her own money, and "did a bit of fundraising", to acquire some land which she gave to the Gambians.

"She started to build accommodation, hoping that teachers from the UK - or anywhere, would come out and share their skills," There are many Scandinavian, German and Dutch visitors to The Gambia explained Irene.

Irene first went to The Gambia in the 1980s, for a holiday, but says that many people stopped going during the '90s, largely because of the country's authoritarian leader at that time, Yahya Jammeh.

Irene next went again in 2013 and has been back every year since - bar 2020, of course. In 2018, Irene invited volunteer and past president of the Rotary Club of Cambridge - John Martin, a retired builder, to come out and lend a hand with the building work.

To date, John has visited The Gambia - the smallest country in West Africa - three times. "I went out there and absolutely loved it," he said of his first visit.

"I said, 'If I'm going to do it, let me use local kids who can't get jobs'. They're pretty adaptable, the Gambians, because they have to be - there's no running water, there's no electricity, there's nothing out in the bush.

Working on the Bantaba Project in The Gambia

"My first visit was to teach a group of youngsters how to make wardrobes. Everything had to be in hardwood because of termites and insects.

"They had only ever used nails before, so I introduced them to spirit levels, screws and countersinking.

"The second time I visited, even more youngsters turned up to learn. I helped them secure guttering and also roofed the building.

"I had such a great time, I will continue to visit and help until it is complete and functioning."

John continued: "Neil Whiteside from Radio Cambridge 105, he's one of our Rotarians and he actually flew out there and did a programme for us on it, and he was very impressed with what we'd done on the site.

"He said, 'I'm in IT so I think when we're at that stage, I'll be able to get you the IT stuff so you can actually teach from anywhere”.

"So we're hoping we'll be able to not only get teachers to go out there, but also to teach them remotely"

Rose Dawson, Irene Childerley, Hazel Dawson and John Martin with the Madiana Village Development Committee and Abou Keita. The village chief is in the blue robes.

The next planned phase is digging for a borehole installing solar panels and pumping water to the centre. This will enable the kitchen, nursing room and toilet and shower facilities to be completed.

The building of the workshops and the community hall will be completed when funds are available - £15,000 would complete the buildings, making them ready to serve the community.

Visit the project's Facebook page at facebook.com/helpingGambians/ for more information. Donate at uk.virginmoneygiving.com/Team/Bantaba.

Rose and Irene are keen to get in touch with anyone who would like to help the project here and in The Gambia. Email:  TheBantaba@outlook.com.

To find out more about Rotary visit:  Home | Rotary International or

Rotary in Great Britain and Ireland - We are People of Action (rotarygbi.org)