An ex-president honoured for his work for COP26 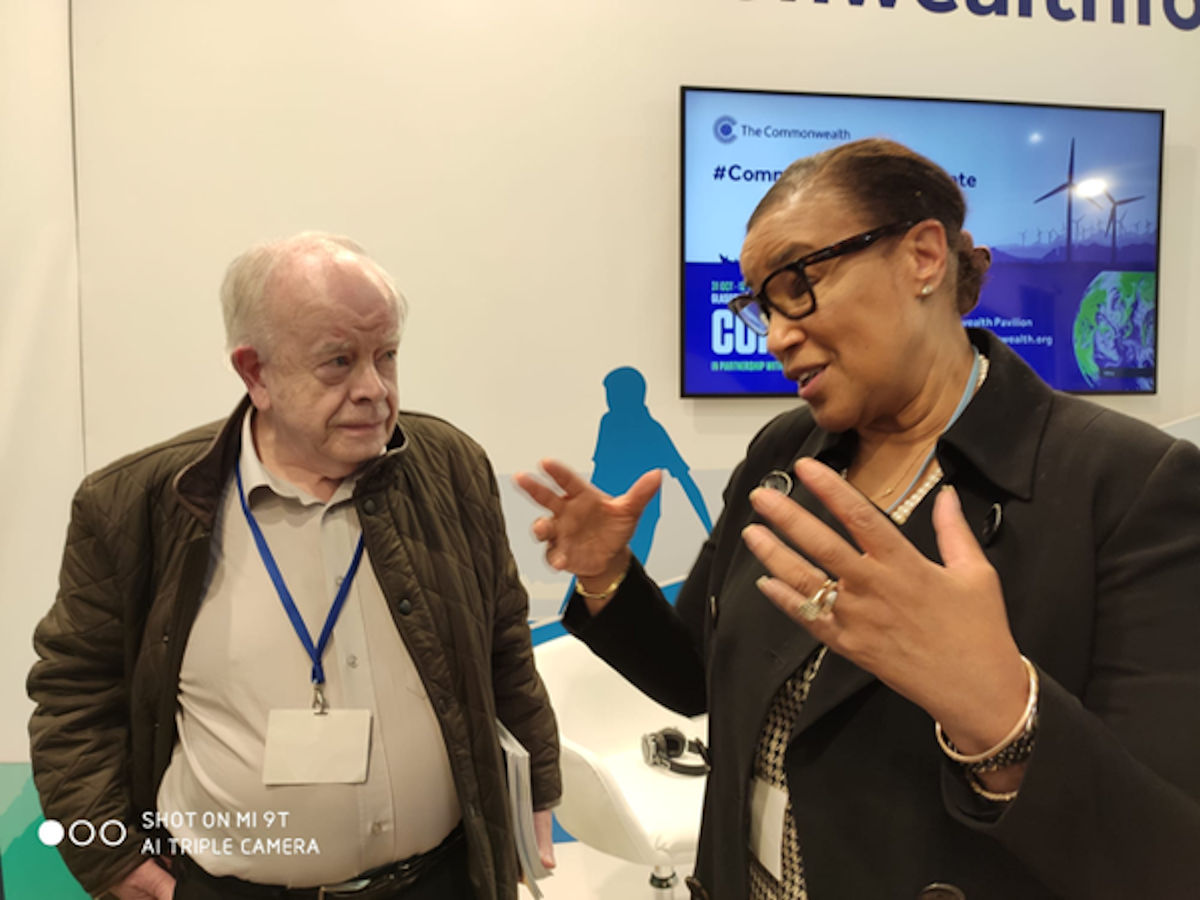 Following his wonderful efforts is promoting Rotary and Protection of the Environment, Past President John Macpherson was presented with a further two sapphires by the Rotary World President Shekhar Mehta at COP 26. This is addition to the original Paul Harris Fellowship and Sapphire that John was awarded by us before he returned to his native Scotland to continue his Rotary service there.

We all seem to have been rather busy and currently Rotary has taken over my life.

As you know I am now a member of Helensburgh Garelochside Rotary and following the announcement that Glasgow was to host to the COP26 Conference in November, with some 30,000 delegates and over 100 Heads of State attending from all over the world we felt it was important for local Rotary to be involved.

We have experience of running poster competitions for primary schools and it seemed natural to propose a similar competition, themed to the aims of COP26, so we suggested such a competition to our District. The idea met with, let’s say, a mixed reaction, so we decided to run the competition ourselves.

COP26 was rather a large target and we needed some help so we approached RI at Evanston for assistance and did a presentation to the Governing Council of Rotary in GB&I.

Some 9 Districts decided to support the competition and RI gave us the required entry to COP26.

The competition was a success beyond our dreams with over 3,800 entries being received from as far apart as Cornwall and the Isle of Mull.

The entries demanded the widest exposure and we have negotiated displays at COP26, COY16 (the associated youth conference), Glasgow City Chambers, the major Delegate hotels, and Glasgow Airport. ESRAG, the Rotary Action Group, developed an interest and the African representative asked me to extend the competition to that continent - frankly I baulked at that with only 2 months to run! However, there is a push for the competition to be run internationally for the next COP Conference.

As an aside we booked the RI President and the other Rotary delegates into the hotel where the club weekly meetings are held so it gives other club members an opportunity to meet the President. An upshot of all this was an invite from RI to be one of the five Rotary delegates to COP26 with the others being:
1. RI President Shekhar Mehta
2. Judith Diment, PDG Thames Valley, Dean of Rotary Representatives to the UN.
3. Doug Wills, Managing Editor of both the Independent and the London Evening Standard, Rotary representative to the Commonwealth.
4. Karen Kendrick-Hands, Co-Founder of the Environmental Sustainability Rotary Action Group (ESRAG) from America.

Needless to say, I was delighted to receive this invitation. When anyone asks why we took on such a challenge I simply tell them I learned my Rotary in Burton!

back Enables invisible links from main pages. For current use, see below.