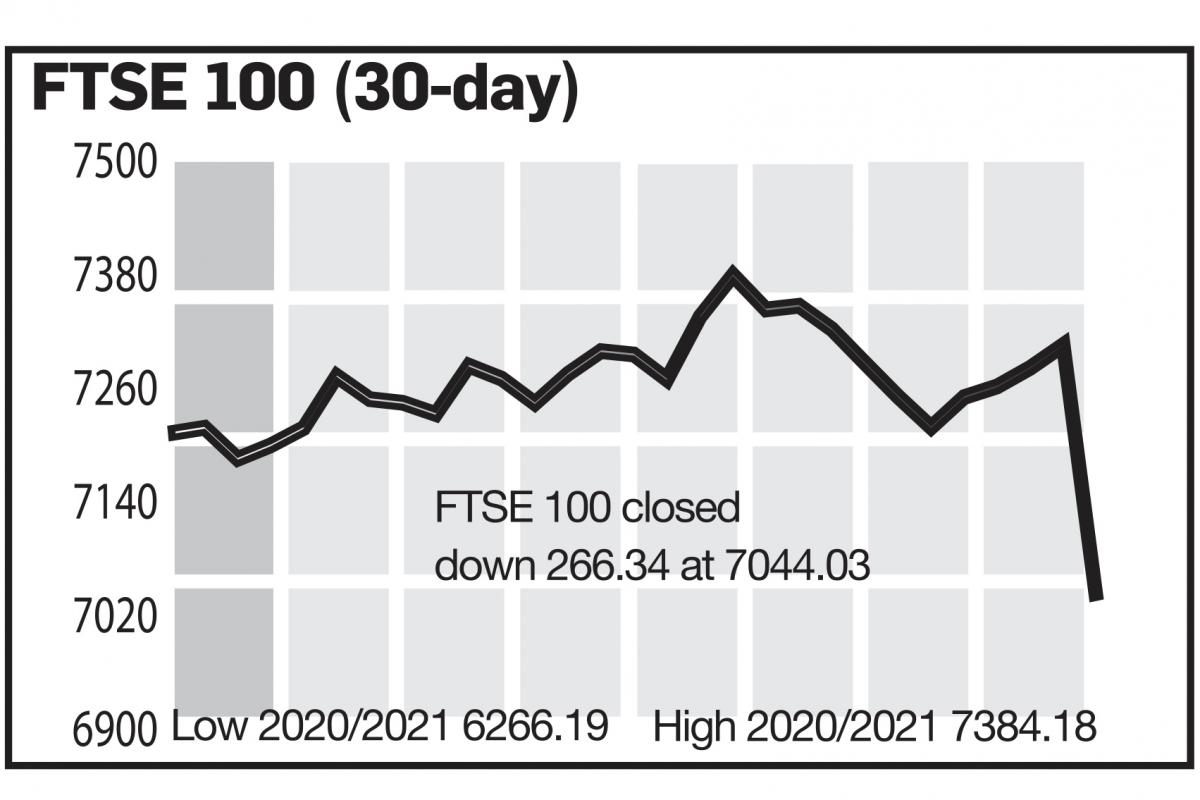 There was turmoil on the markets on Friday as the FTSE 100 suffered its worst one-day fall - 266 points - since late March 2020 in the early days of the Covid pandemic, as investors reacted to news of a new Covid strain. Having started the week on 7223.57 the FTSE 100 index ended the week on 7044.03.

The market had risen day on day for the fourth consecutive days as hospitality and retail firms proved popular. Then came Black Friday. As a consequence only 16 of the FTSE 100 gained this week.

Investors around the world showed nervousness as the UK imposed new travel restrictions on those coming from half a dozen countries in southern Africa where a new strain of the Covid virus has been identified.

The price of oil was already in a slump on the back of speculation that the US and China might co-ordinate efforts to release further oil supply. That was before Friday’s reaction when the cost of Brent crude oil plummeted by 11% to 73.18 dollars per barrel.

Upbeat notes for a number of hospitality and leisure firms including Whitbread and InterContinental Hotels Group were quickly forgotten. Airlines and other travel companies were among the worst hit on the day, with online supermarket Ocado being one of the only FTSE 100 companies to gain. Like other online retailers, Ocado stands to gain heavily if there is another lockdown.

International Consolidated Airlines lost 11.5% this week on top of 9.6% the previous week.

Earlier in the week a rise in iron ore prices helped to support the miners, with Rio Tinto and BHP both higher. Intertek helped the FTSE after its shares were boosted by a 5.6% rise in group revenues to date.

The impact on our FTSE 100 competition was significant. Everybody lost money this week, some significantly more than others. Rolls Royce’s slide was bad news since that was the most popular choice in our contest. Best performer The Gardener lost just £305 and that resulted in a best of the week climb of 21 places.

Slipping the most places was Stuart Farquharson down 42 places and Kelly’s Zeros down 39.

There is a new leader at the top of the leaderboard as The Piper hits number one with just two trading days left. Douglas S has slipped to second and needs oil prices to recover. Eight of the top ten stuck in there but Ginger Biscuit and Jane Mitchell have displaced Martin King and Sammy the Tammy who lost the most on the week -£4843.  With the volatility in the market the ultimate winner could come from anyone in the top twenty.

At the wrong end Jim Aitken has challengers for bottom slot with Maureen Walters and Sandy Paton now within hitting distance. MacScot2 continued his escape from the bottom pack with a 12 place leap.

Best performing shares of the week

Poorest performing shares of the week

Our competition ends at close of play this Tuesday and we will try and get the final results to you as soon as we can.