President Rishika and past President Shagun handover chain of office. 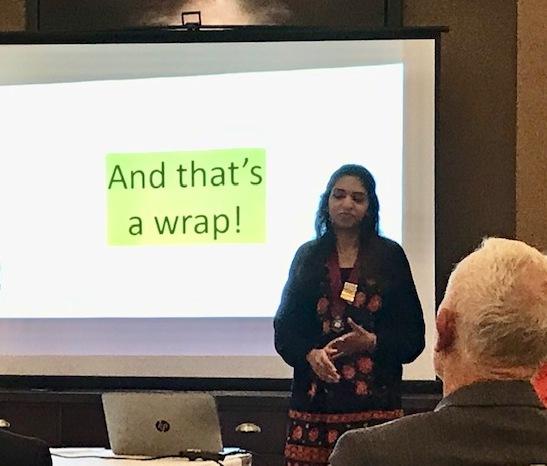 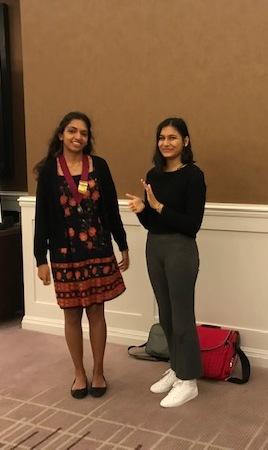 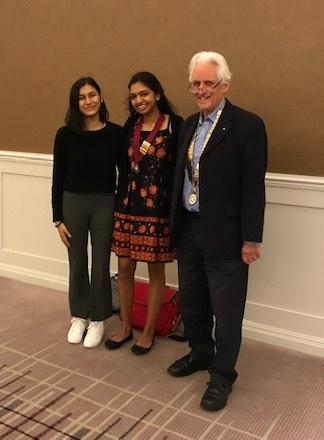 The New Golf Club being unavailable, Rotarians met for lunch at Hotel du Vin. They were joined by 8 students from the St Andrews branch of Rotaract. Like Rotary itself, Rotaract is a global organisation that empowers people to create positive change, in their local communities and around the world. It is designed for young people, over 18 years of age, and aims to help them become the leaders of tomorrow. President Colin Mitchell, who started the St Andrews group ten years ago, gave a special welcome to three of the Rotaractors. Mariko Okawa is returning to Japan having completed her PhD at the University, though she has already booked a return flight for next Spring. Shagun Dhanania has just finished her term of office as Rotaract President. She handed the Presidential chain to her successor, Rishika Kannan. Both are undergraduates studying Psychological and Biological Sciences. Rishika was herself the guest speaker and delivered an entertaining talk entitled ‘All about me’. Born in the USA, she went to school there and then in the Netherlands before her parents moved again, back to their homeland of India. Rishika, by then a teenager, found this move challenging, as exemplified by the fact that her parents come from very different parts of India, one Hindi-speaking, the other Tamil, while the local language in Bangalore is different again. She soon began to pick this up however and quickly formed new friendships, and whilst at first she missed such staples of her previous diet as cheese and peanut butter, she now delights in the chance to pick pomegranates and mangos from their own garden. Once she felt properly rooted in India, Rishika looked abroad for a university education and chose St Andrews for the reputation of its School of Psychology. Unfortunately, the pandemic kept her away from St Andrews last year, studying at home online, but she made good use of her free time, tutoring schoolchildren, studying Yoga and joining a Toastmaster’s Club, which doubtless contributed to what was a most polished talk. Fellow countryman, Bangarpet Krishnaswamy, gave the vote of thanks.

Involvement with the local community

International projects are assessed and supported.

Social interaction with sutdents, Rotarians and the public

Talks and events of Special Interest