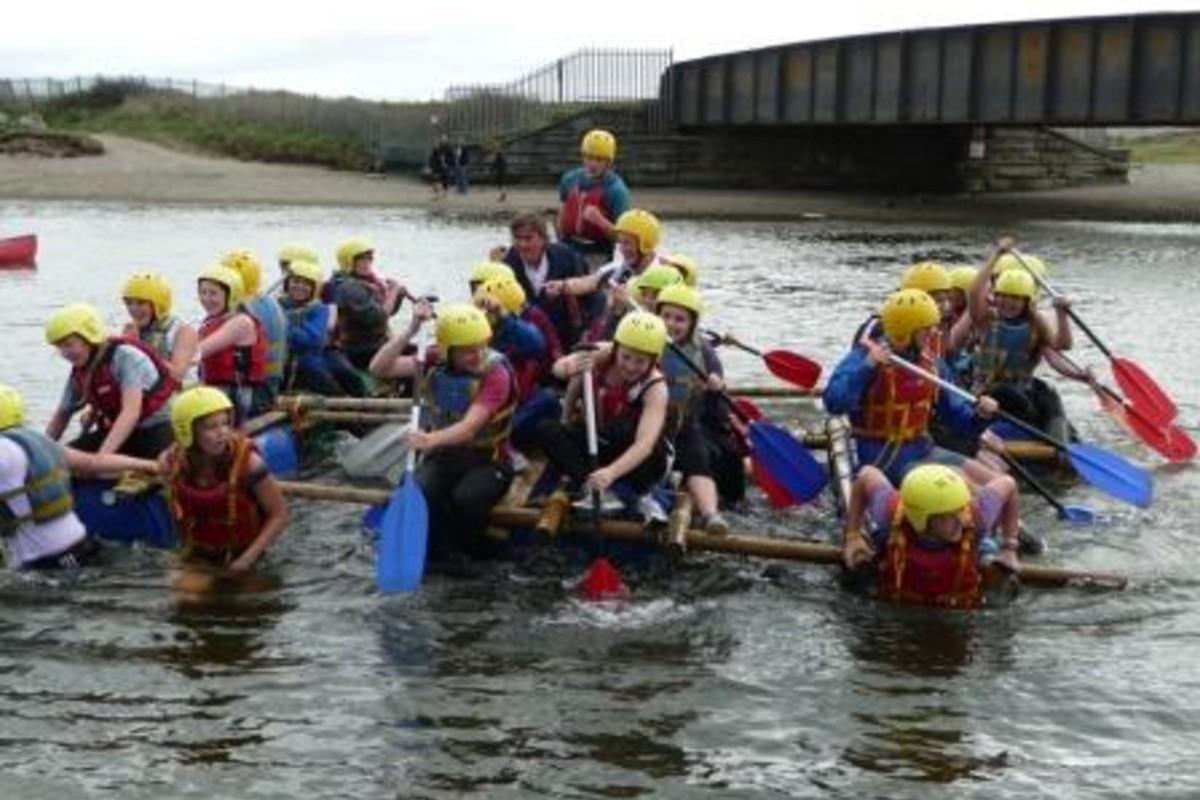 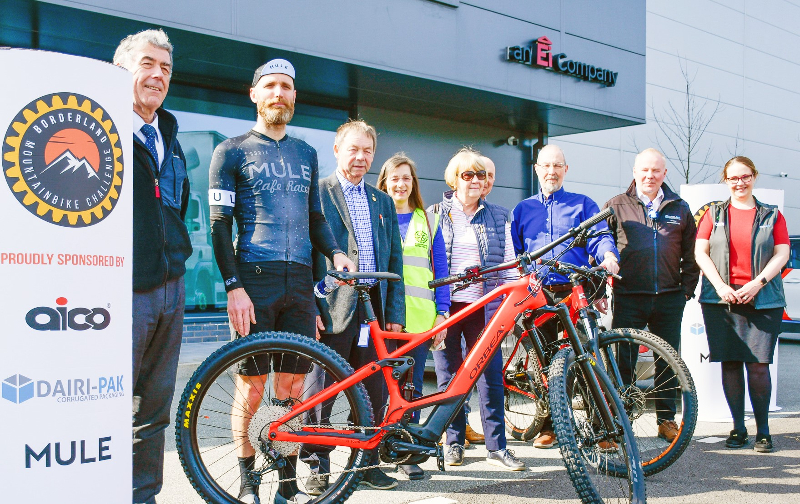 The ‘Borderland Mountain Bike Challenge’ was officially launched on March 25th … this will be the 28th running of the annual event.

Borderland Rotary members joined Tim Gray, MD of Dairi-Pak, James Davies, owner of Mule Cycles and Jane Pritchard from AICO at their headquarters in Oswestry to start the countdown to the 2022 Borderland Mountain Bike Challenge. The 22-mile challenge takes the riders over natural trails, green lanes, and farm tracks, up and down private land in the foothills of the Berwyn Mountains and is available to riders of all levels of competence.  However, it’s not for the faint hearted as there’s only about 300 meters of tarmac and probably no more than that on level ground. You just need a bike, a helmet, and the heart of a lion! Some may wish to ease the pain by entering on their E-bikes as this year they are very welcome.
The ride has been sponsored by Dairi-Pak Ltd since its first running in 1994. Brian Gray the former owner of Dairi-Pak, a keen cyclist and a Rotarian helped formulate the ‘challenge’ as it is today… from those humble beginnings the event has run every year (except for the last two years due to Covid) and has grown in support and reputation as a fixture on the MTB calendar.
Unfortunately, Brian Gray passed away in 2012 and his son Tim Gray, who now runs the company, decided to continue with his support and sponsorship. During the pandemic Borderland Rotary members and Tim Gray took some time to rethink, reshape and upscale the whole event - keeping all the good bits but increasing the entry limit from 150 to 300.

Tim Gray reflects - “ During successive lockdowns I had plenty of time to reflect and decided it would be great to relaunch the ‘challenge’  as a bigger and better event for riders, sponsors and recipients of the money raised.”

He continues “ It became clear that if we wanted a better event involving other ‘community spirited’ local companies would extend our reach and secure the future of the Borderland Mountain Bike Challenge for many years to come. I would like to thank AICO and Mule Cycles for joining Dairi-Pak in sponsoring the ride, their enthusiasm and professionalism has been invaluable in preparing for this year’s event. “

Why not get involved, maybe form a team - just look on Facebook or the new website www.borderland-mtb-challenge.org 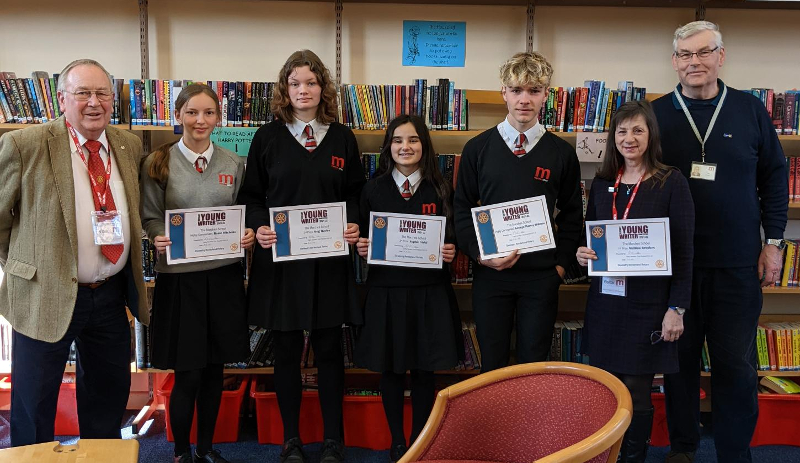 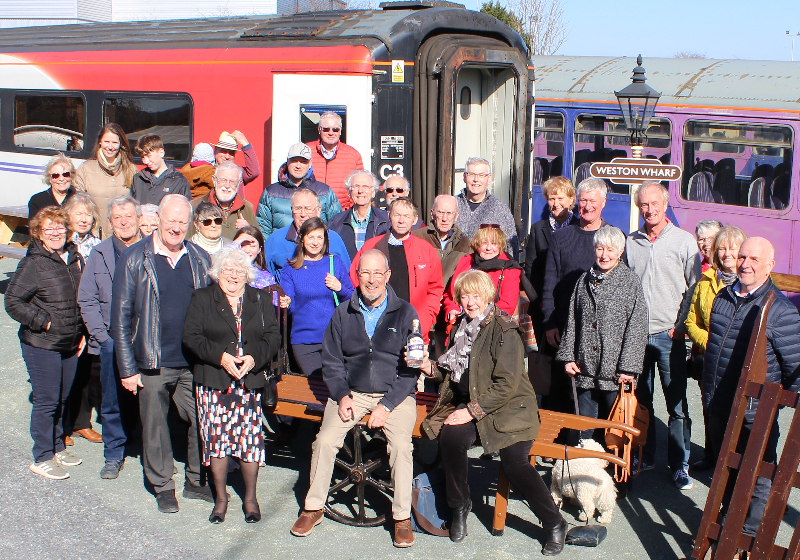 Borderland Rotary and Cambrian Heritage Railways teamed up to run the Borderland Express last Saturday, prior the official opening of the line on Saturday 2nd April 22. The trip on the newly restored section of the line from Oswestry to Weston Wharf was for Borderland members and friends and it was a great turnout with nearly forty passengers alighting the train for lunch at Stonehouse Brewery then, back on the train home. The sun shone and there was great hilarity and smiles all round – just so different from the early months of 1965 when the last scheduled passenger train on the ‘up-line’ to Oswestry clanked, rattled and screeched its way through the station and steamed away into history and on Radio Luxembourg as it faded and crackled, you heard Twinkle, mournfully lamenting the loss of her beau, Terry as railwaymen also sadly mourned the loss of their jobs and a way of life. We must not shut the door on the past but we should look to the bright future that CHR has before it as the line increases in length and the services increase in scope. Rob Williams, chairman of CHR, oversaw the trip and said, “I’m so pleased that everyone had such a good time today and I hope you all go out and tell people that the Cambrian Heritage Railway is truly back and well worth a visit. For the moment, all tickets must be pre-booked on line and we’ll be doing Friday and Saturday evening trips to the Brewery and back so great for a night out! Oh, and thanks for the donation!” 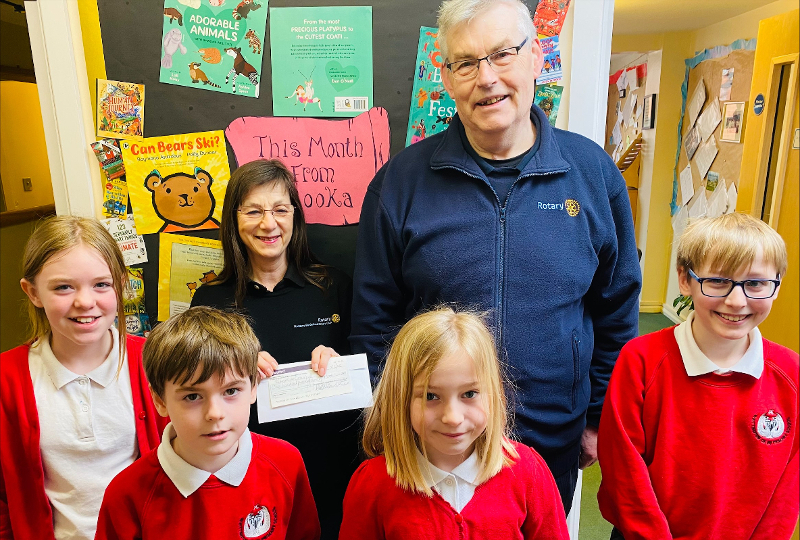 Justin and Sherie Soper from Borderland Rotary club ran a bookstall at Whittington Primary school the other day selling children’s books of all shapes and sizes and it was a roaring success. They only had a relatively short time to run the stall and it was extremely busy and Sherie Soper said, “It was frantic and we sold lots and lots of books and raised an amazing £80.50 in no time at all and, when we reported back to Borderland, it was decided to round the figure up to £100.” The plan was to raise money for the school itself so that they could invest in something for the children and Head Teacher, Carl Rogers said he very much appreciated all of the effort in supporting the school and announced that the £100 would be spent on a collection of poetry books to encourage the children to both read and write poetry. 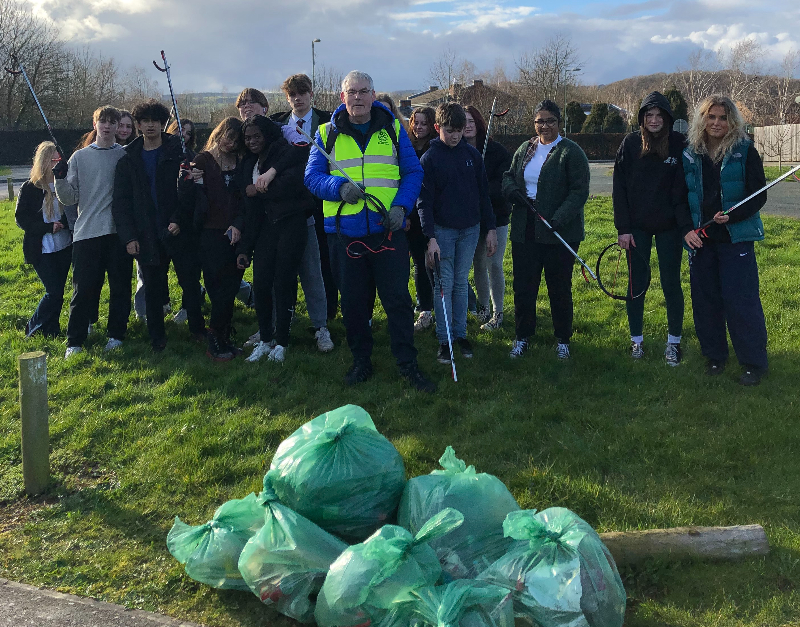 The students felt that they wanted to support the community and Shropshire Council in their regular litter picking sessions and were surprised at how much litter they managed to collect.

They plan to return with Borderland Rotary to litter pick areas of Eastern Oswestry again on Friday the 18th of March and then on a monthly basis going forward.

Borderland Rotary were quick off the mark to donate £1,000.

This was match funded to provide £2,000 where it is needed. 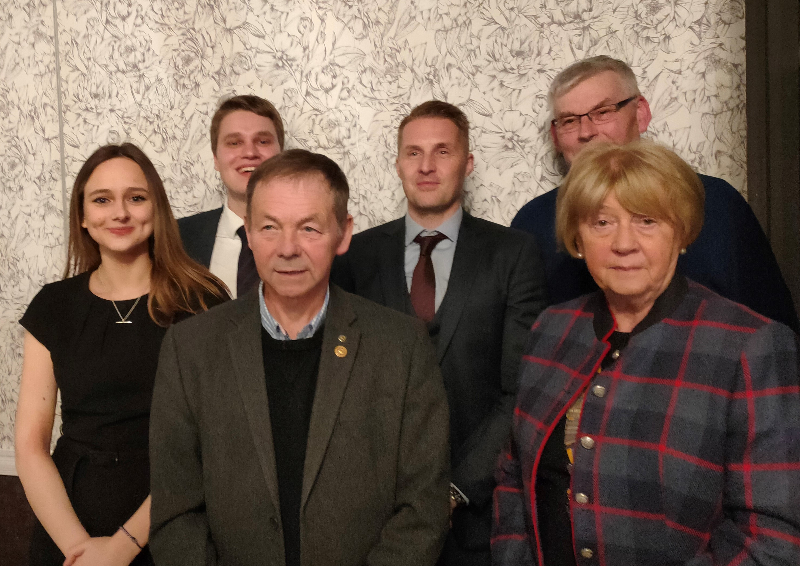 Borderland Rotary welcomed Oswestry School the other day to recognise the great effort they made in raising lots of money for the Rotary worldwide Polio Appeal. Mr Oliver Leaver, Director of sport & co-curricular studies spoke on his role in helping head girl, Alys and Head Boy, Matija in the fundraising project which raised an amazing £741, he said, “I am obviously very proud of all the students who took part in the cross country run and helped to reach such a wonderful total. Oswestry School has a wide range of after school clubs which gives us the opportunity to get involved with community projects, both local and international.” The Purple for Polio campaign is a worldwide Polio eradicating scheme that is co-funded by Rotary International and the Bill and Malinda Gates Foundation. The foundation match funds the money raised by Rotary so the £741 will become £1,482 and this will represent a total of 4,446 immunisations. Few people in this country remember the horrors of Polio but it is still present in some parts of the world but hopefully, in the not-too-distant future, it will finally be beaten. 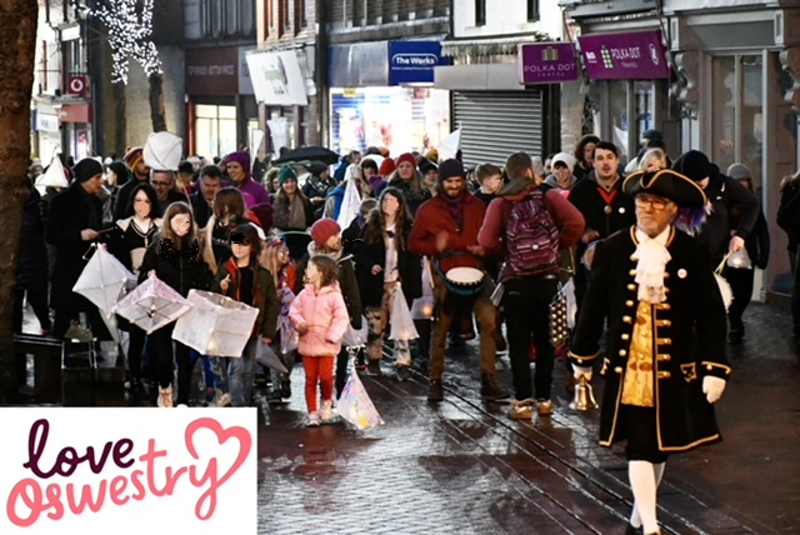 Borderland Rotary members were pleased to be able to help marshall the Love Oswestry Lantern Parade which threaded its way from Festival (Red) Square through the darkening park out near Wetherspoons and into Bailey Street to mass at the Bailey Head. The Town Cryer was in good voice as he thanked the children and ending with the usual, “God save the Queen”. Although the weather was not what was hoped for, the rain stayed off until everyone was on their way home. Let’s hope this becomes an annual event. 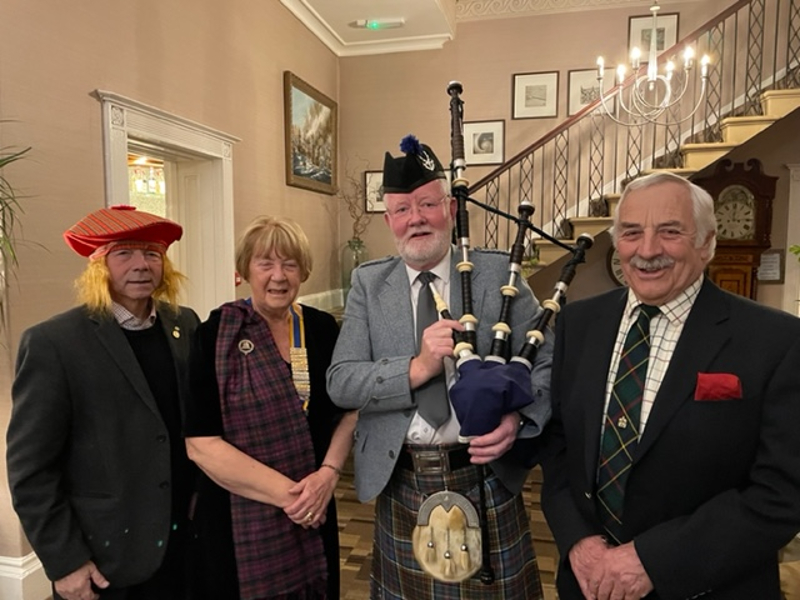 Borderland Rotary celebrated Burns Night by welcoming piper Andy Young as he first piped a welcome to the festivities and then paraded around the room followed by the steaming haggis which was borne by the chef. Andy then recited the famous Rabie Burns poem, Address to a Haggis. For those who haven’t seen this performed before, it’s very dramatic and as he says, “And then, O what a glorious sight, Warm-reekin, rich!” the knife slices into the haggis and the contents spills out. The performance ends with a toast to the haggis and all down a wee ‘dram’. President of Borderland, Cathy Osselton said, “I’d forgotten how loud bagpipes are when played indoors but it made for a great evening. It’s now time to get back to work on the club projects after the disruption of the last two years."

Borderland Rotary first organised the Mountainbike Challenge back in 1994 and are thrilled to announce that the 2022 event will be sponsored, as usual by Dairi-Pak and Mule Cycles but we are welcoming AICO into the fold as well. The 22-mile challenge, which was cancelled for the last two years, takes the riders over green lanes and farm tracks, up and down the foothills of the Berwyn Mountains and is available to riders of all competence however, it’s not for the faint hearted as there is only about 300 mtrs of tarmac and probably no more than that on level ground. If the pandemic has done one positive thing, it is the explosion in cycling of all types and particularly, the growth in sales of electric mountain bikes so, in response, the challenge will welcome E-bikes from now on.

Jonathan Jones, who organises the event for Borderland said, “I’ve really missed the event the last couple of years and so glad to be back as it’s an important charity fundraiser as well a great, exciting ride. Our main benefactor has always been the Air Ambulance and this year we hope we can top all previous years as the event grows and develops so, if you’ve taken up mountain biking during the pandemic or you’re a journeyman rider, please get involved. Details will be available soon.”

Tim Gray, who is chief executive of Dairi-Pak Packaging, has always been involved in one way or another as his late father, Brian, came up with the idea and launched the first ride in 1994. Tim said, “The lockdown gave me a little time to think about things other than family and business and it occurred to me that the ride could be bigger and better if we made some changes – not to the ride itself or the team at Borderland – but to the way it is supported, sponsored and promoted. I’m thrilled to say that AICO are now involved, and our plans are very exciting.”

AICO needs little introduction for as well as being Europe’s market leader in home life safety products, they are a major local employer and committed to community projects around Oswestry and beyond.

This year, we will also have the support of our local newspaper, the Oswestry Advertizer which will be involved as associate sponsor and you’ll be able to follow all the build-up and get information as we get towards 7th May. 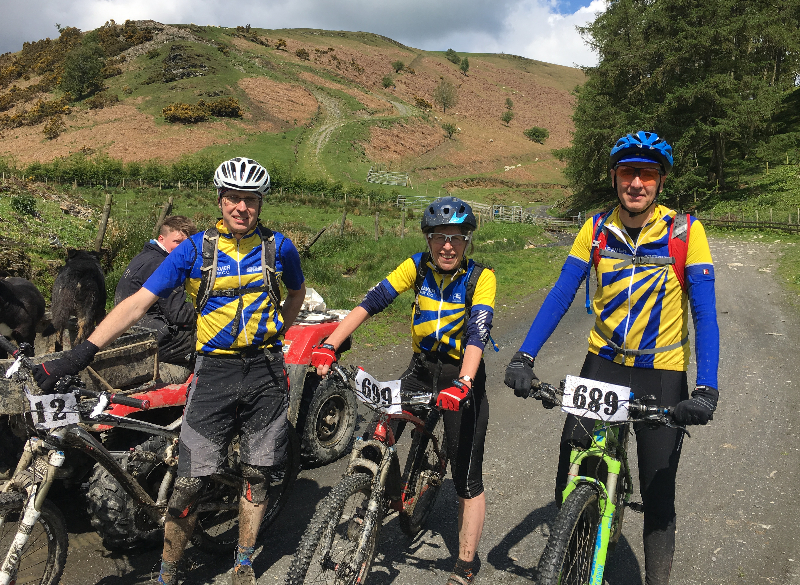 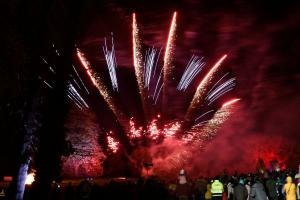 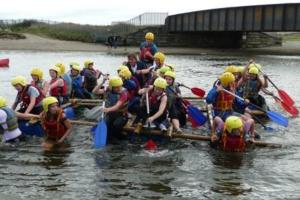 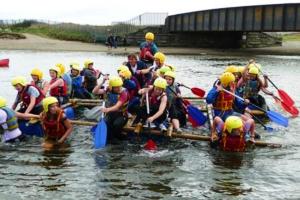 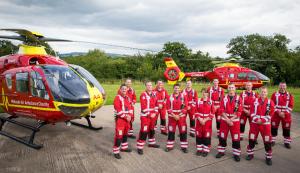 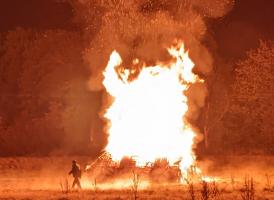 back Collection of past News, Media and Press