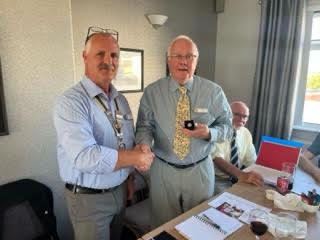 It’s not often that anyone can surprise Furness Rotary Club Secretary Graham Postlethwaite, but that happened recently when President Martin presented him with a Paul Harris sapphire pin.

Paul founded Rotary in Chicago in 1905 and it has been common practice in Great Britain and Ireland to name a Rotarian as a Paul Harris fellow to recognise the exceptional contribution they have made to their club, and the honour has been bestowed on many members of Barrow’s three Rotary clubs.

However very few Rotarians have been honoured with the second of the nine different levels which can be awarded, but this happened recently when President Martin McLeavy presented a sapphire pin badge to Graham.

Martin said “Graham is always one of the first to volunteer for activities and is at the forefront of almost everything we do. He’s reliable, tenacious, knowledgeable, and works tirelessly in the background.

“For me personally, I’m not sure how I would have coped as President without his advice and guidance over the last two years, which were made difficult due to covid.”

Before presenting Graham with the pin badge inlaid with a sapphire, Martin described Graham as an outstanding ambassador for Rotary and a brilliant asset to the Rotary Club of Furness.