An overview of speakers.


At our club meeting on Thursday, 15th September, Carnforth Rotary member, Ron Nelson gave his job talk. The title of his presentation was "Portrait of a Career in Shipbuilding".
Ron worked for 40 years at the Barrow Shipyard which had a history of shipbuilding spanning 150 years. He started as a graduate engineer and worked on the hydraulic systems which operate the hydroplanes on submarines. He progressed to working on the design of various systems for surface ships including the helicopter carrier HMS Ocean; an Auxiliary Oiler for refuelling at sea; HMS Bulwark and the Aircraft Carrier Queen Elizabeth II. He spent time working between the Barrow and Clyde shipyards as the build of the vessels proceeded and also at sea on the sea trials.
A new generation of nuclear submarines involved Ron in the procurement of various components for which there were strict noise criteria. This was important so that the overall sound signature of the submarine was at a minimum and meant that the submarine was less likely to be detected by an enemy.

Ron illustrated his talk with many interesting photos.  Our members had a number of questions on points which Ron explained in more detail. Our President Heather thanked Ron for his talk. 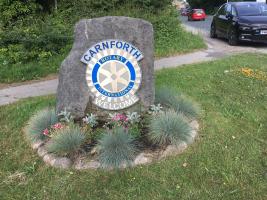 Carnforth Rotary is very active in the community, being responsible for the upkeep of the three boundary stones, and our rotarians can often be seen around the area. We constantly look at ways of helping and supporting Youth groups.

An overview of speakers.

This is the 7th area of focus. Carnforth Rotarian, John Blowes, is District Lead.

Having fun out and about. A very good way to relax.