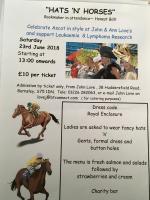 Out meeting - Every 5th Thursday of a month, we plan to visit another club in that week.

All about “growing”, “cooking” and/or “selling produce” schemes and developing these further across the borough.

Spamalot - The Lamp Room (meeting for a meal at the Glass House 5.45pm)

Club Assembly - Next years officers, presenting their plans, for the following year.