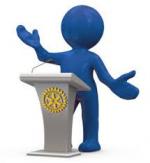 It's Goodbye from President Brian

We hear about some Youth Projects and share with our family.

Donna Jennings of Scottish charity For the Love of a Child read more...

Our seventh Oktoberfest was held at Discovery Quay from Thursday 21st to Saturday 23rd September. Up to five local bands played each evening and we had a great selection of beer and authentic German food. read more...

We will have a visit from the District Governor Graeme Archibald

Eddie Small will talk about the Life and Times of McGonnagall

Rotarian Phil Turner will give his vocational talk

Dr David Martin will talk about the Newtyle Railway

Beverly Searle will talk about Wellbeing: how to save the planet