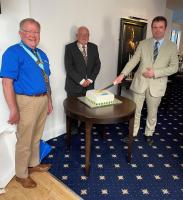 100th Anniversary of The Rotary Club of Torquay

The 13th September was the 100th anniversary of the first meeting .

The Club Monday meetings  have been suspended because of the coronavirus situation.

Best wishes go out to all members in these extraordinary times when we must each remember to play whatever part is necessary in the national interest.

Torquay Rotary Club was formed in 1920 as the first club west of Bristol, and initially comprised 27 local businessmen with the Mayor of Torquay as President. It immediately identified the needs of Torbay Hospital (then in Higher Union Street) and began fund-raising initiatives on its behalf, which continue to the present day. In 1922 the club inaugurated a scheme for blue plaques on local buildings of note and two years later hosted clubs from all over Britain and Ireland for what was only their fifth ever conference.

At the beginning of a new year at Torquay Rotary Club there is always a handover - it's just that in the midst of coronavirus restrictions things have to be done differently. Normally, outgoing President Maureen Macdonald would have placed the regalia of office around the shoulders of her successor, President Graham Doodson. But social distancing this year meant that the chain of office had to be literally handed over to former college lecturer Graham in the suitably large garden of a Rotary colleague, as our picture shows. In the background are, from left, past president Roger Heath who formally introduced Graham at the handover ceremony; past president Lyn Smith who thanked Maureen for her year of club leadership, and past president Gerald Arnold who is now president-elect and will take over from Graham for a second stint 'in the chair' next July. Remarkably, Torquay  has now entered its 100th year as the oldest English Rotary club west of Bristol and will be marking its precise centenary in September - virus permitting, of course. 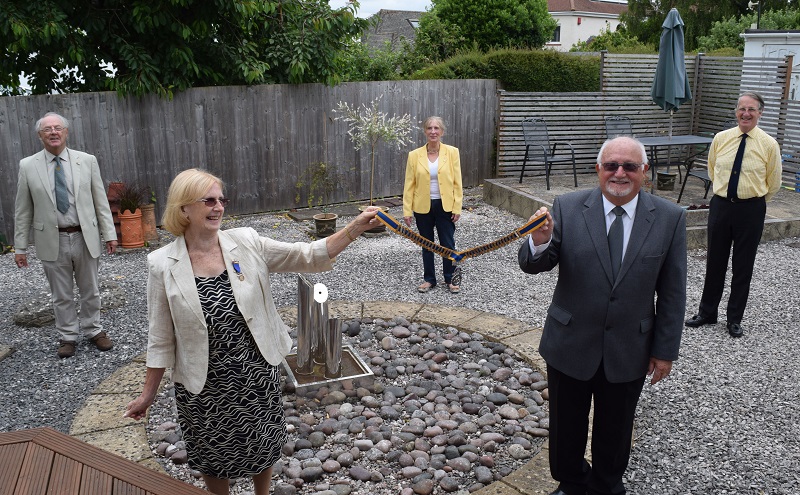 Social distancing doesn't make things any easier but as our picture shows, the two metre rule was clearly observed as a couple of litter picker tools came in handy for transferring a £300 cheque from Rotary past president Roger Heath, right, to Riviera Life Link food bank chief Ian Williams. The cheque was a small part of the proceeds from Roger's fundraising efforts last year

The club has been supporting the food bank all through the virus emergency and this car boot full of food and household necessities was just the latest instalment. Current Rotary president Maureen Macdonald, who masterminds the operation with colleague Lyn Smith, also  'handed' over a clutch of cheques for the food bank from Rotary members.

Torquay Rotarians have also put together a £1,000 thank-you boost for local NHS 'front line' health workers and will be making a suitable presentation when an appropriate gift has been identified.

In September Torquay Rotary Club will be marking 100years of service to the local community. 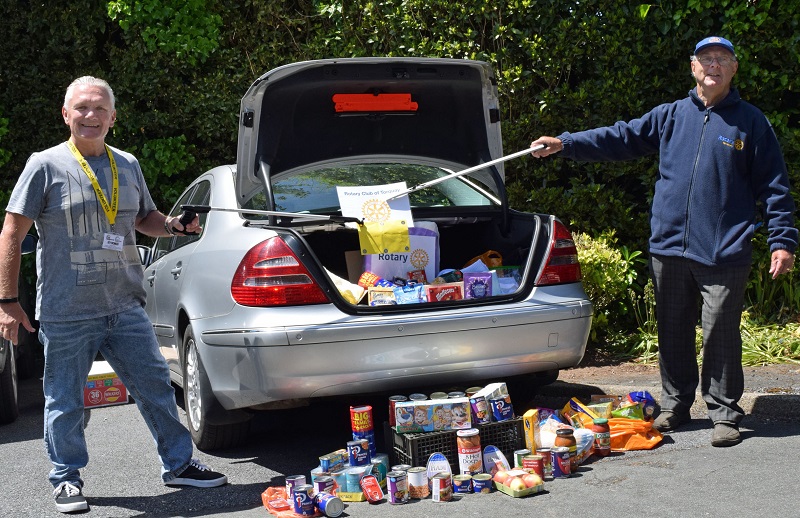 Please support Rotary Club of Torquay on #easyfundraising, you can raise FREE donations when you shop online with over 4,500 retailers. It's simple and only takes 2 minutes to sign up! Plus, once you have raised your first £5, easyfundraising will match it! Sign up now: https://www.easyfundraising.org.uk/causes/rotarytorquay/?invite=818she&referral-campaign=c2s&utm_source=refsharebox

You shop. Rotary Club of Torquay gets money. For free.

100th Anniversary of The Rotary Club of Torquay

The 13th September was the 100th anniversary of the first meeting .