Rotary is a global voluntary organisation with over 1.2 million members supporting a very wide range of community-based projects large and small, whilst at the same time providing its membership with fellowship and friendship. The Rotary Club of Mendip celebraties 75 years since its Charter Presentation during this Rotary Year. It has contributed to the Cheddar Valley and Internationally in those years.

The Club continues to support the vaccination effort 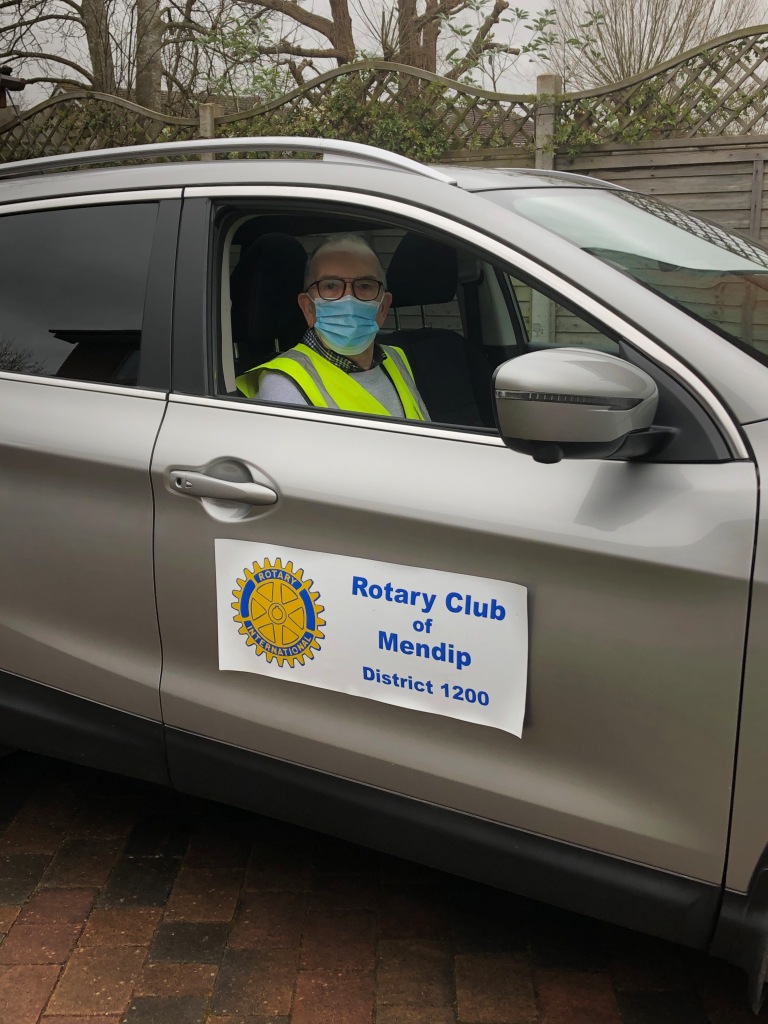 The Club continues to liase with the local GP Practices to provide transport to the vaccination centres for vunerable adults in its catchment area.

The Fencing is Erected for The Space Allotment 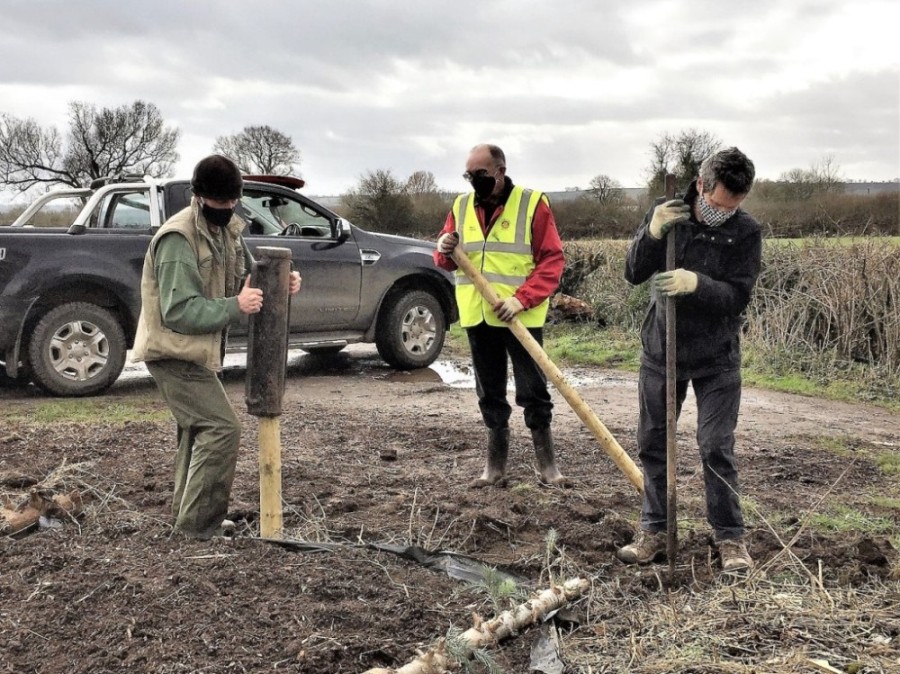 Members of the Club and volunteers from the Space Charity erected the new fence around the Space Allotment in Cheddar. It has been erected to ensure rabbits are unable to get into the allotment to damage the produce. They were assisted by Jason Collins from JC Landscape. The fence posts were obtained from Maw Agri who gave a  discount to the charitable cause. 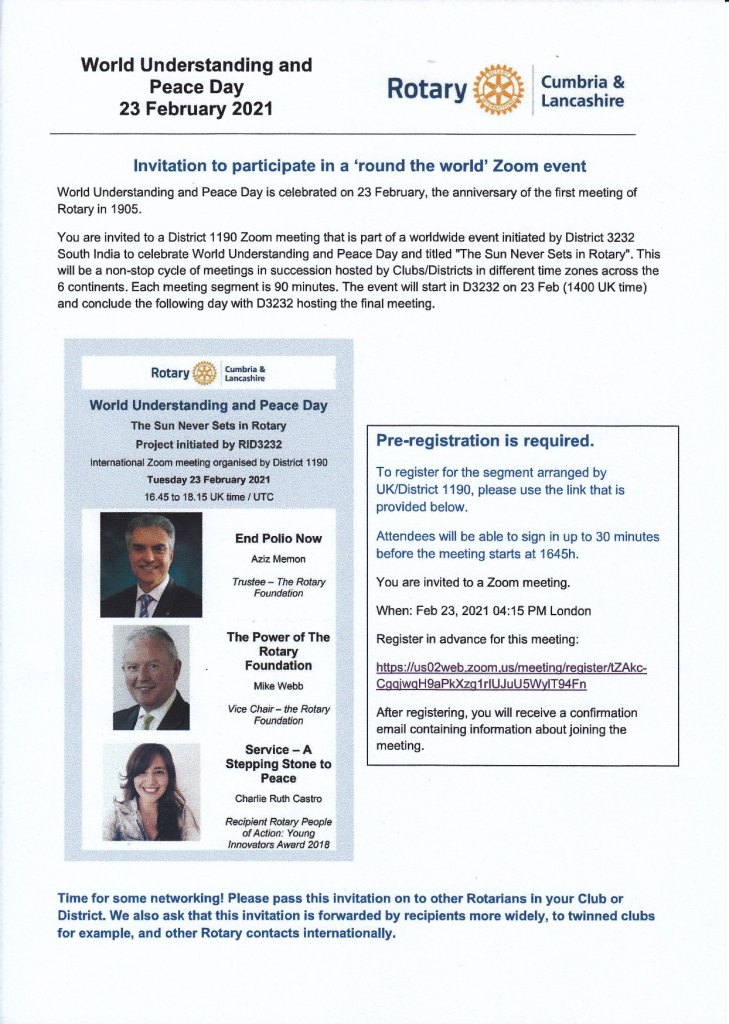 District 1190 Cumbria & Lancashire are hosting the UK segment of the event titled "The Sun Never Sets in Rotary". The event will start and finish in D3232 India, having gone across the 6 continents. Our own Mike Webb is one of the speakers, in what promises to be an interesting event. 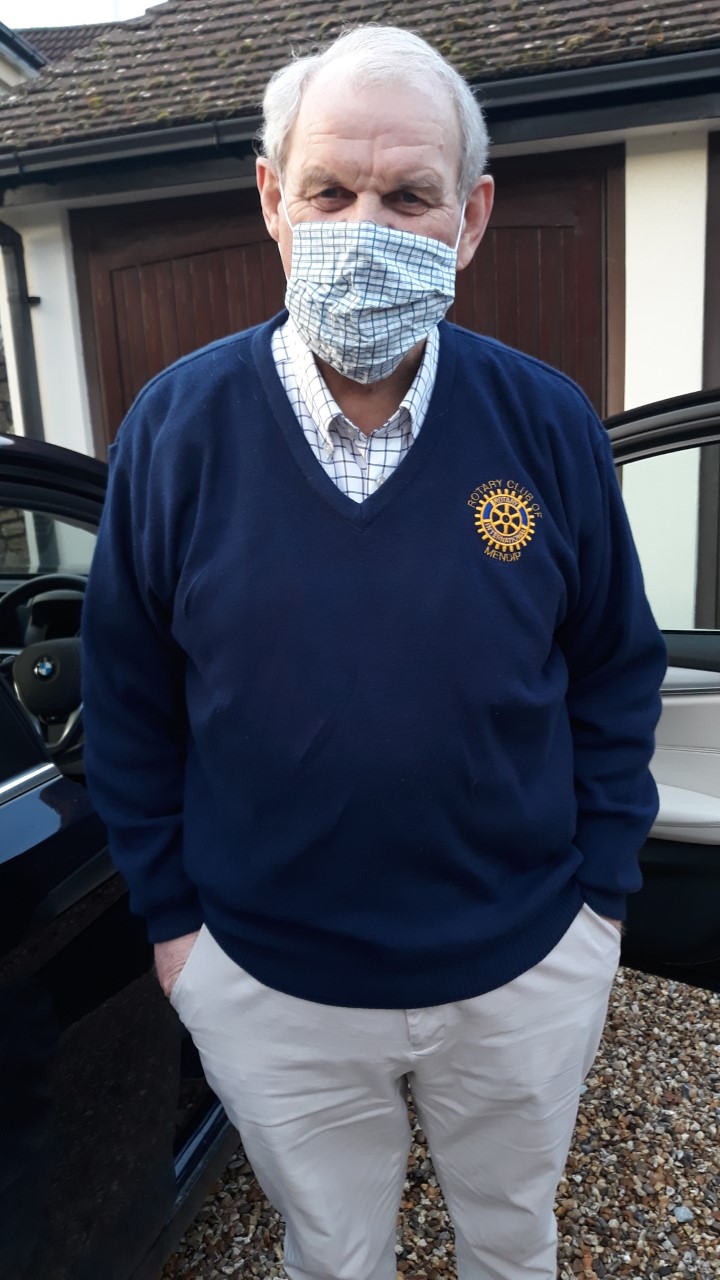 As part of the Clubs efforts during the pandemic, Rotarians Peter Wright and Mike Hiles are involved in the transportation of vunerable adults for their Covid 19 vaccinations. They are also involved contacting people by telephone who are experiencing dificulties during this time including non rotarians through the Cheddar Coronavirus Group. 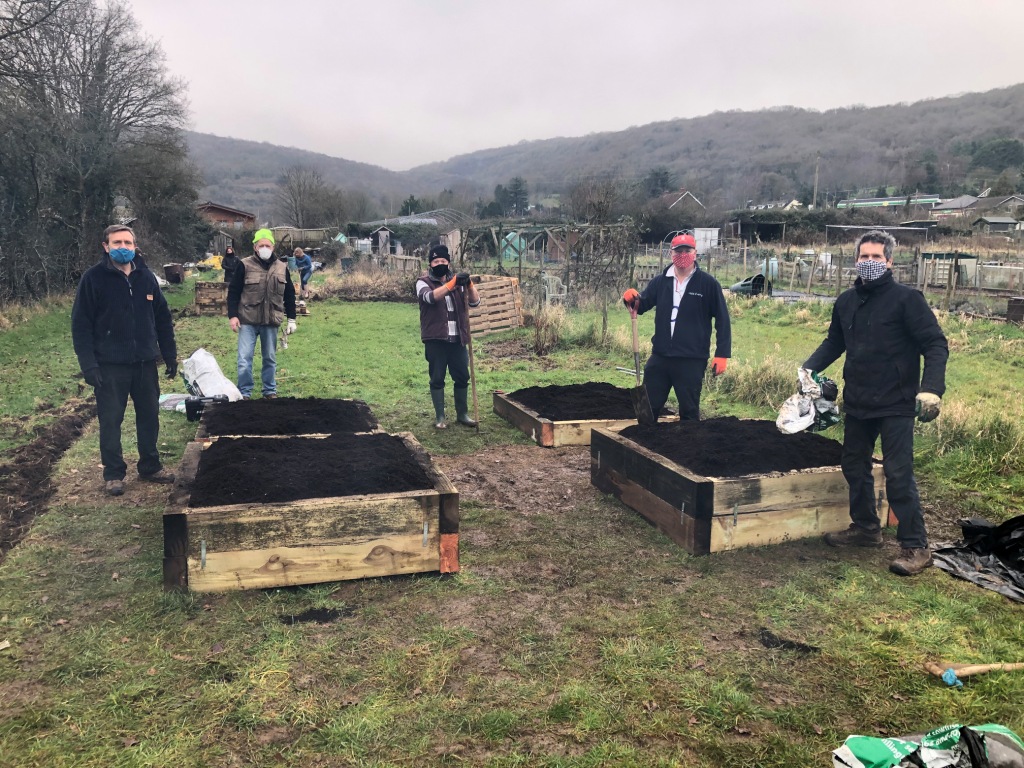 Members of the Club and volunteers from "The Space Charity" were preparing raised beds in preparation for planting later in the year. A trench was also dug to erect fencing around the project. This will be completed later. The activity provided good fellowship in these unusual times. All work was done in a Covid secure fashion and a Risk Assessment was prepared.

The Rotary Club of Mendip has chosen “The Space” as this year’s charity. The Space supports local young people 4-18 years who are suffering mental health issues, which have increased during the current pandemic. The Club is specifically supporting the Community Wellbeing Garden in the Cheddar allotments. The garden will provide opportunities for children, young people, and adults in our community to mix socially, make friends and connect with others to improve their mental well-being.

This is part of a practical solution to help those families and individuals in Cheddar who, for a variety of reasons, are struggling to cope in the society in which we live.

Local Businessman does the January draw 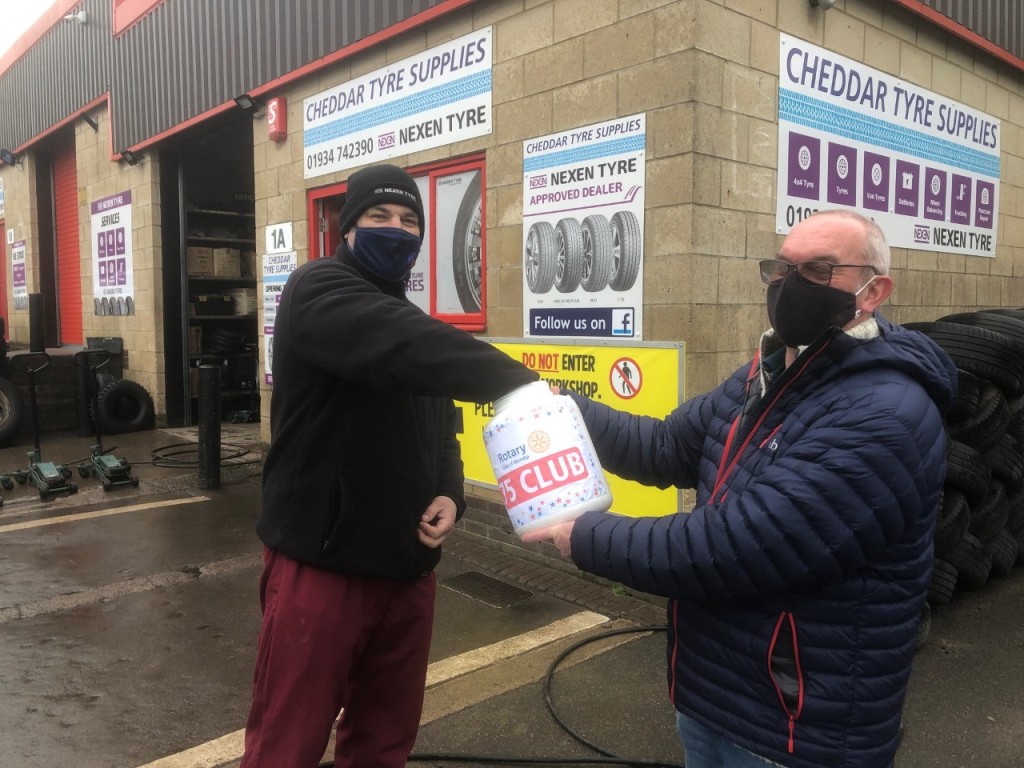 Loca lbusinessman Matt Mayo of Cheddar Tyre Supplies picked the January winning number for the 75 Club. This is the Clubs fundraising efforts during the pandemic. Many thanks Matt. 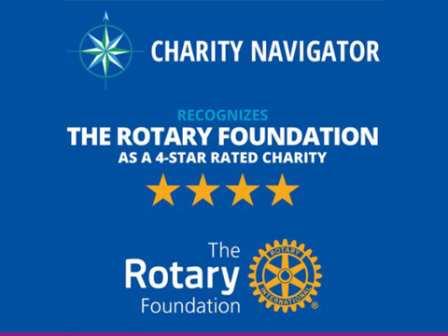 Rotary Foundation has received the highest rating from Charity Navigator, an independent evaluator of charities in the U.S., for the 13th  consecutive year. Thus establishing the Rotary Foundation in the one percent of organisations to do this. The Foundation earned the recognition for adhering to sector best practices and executing its mission in a financially efficient way, demonstrating both strong financial health and commitment to accountability and transparency. The rating reflects Charity Navigator's assessment of how the Rotary Foundation uses donations, sustains its programs and services, and practices good governance and openness. Mendip Rotarian Mike Webb is a member of this team. 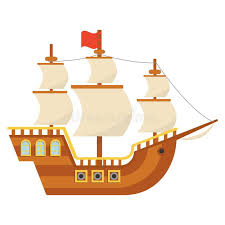 Rotarian George English from the Rotary Club of Kilmarnock gae a talk on the Mayflower. This was the ship in 1620 that carried the Pilgrims from Plymouth England to P{lymouth America where they established the first New England colony. 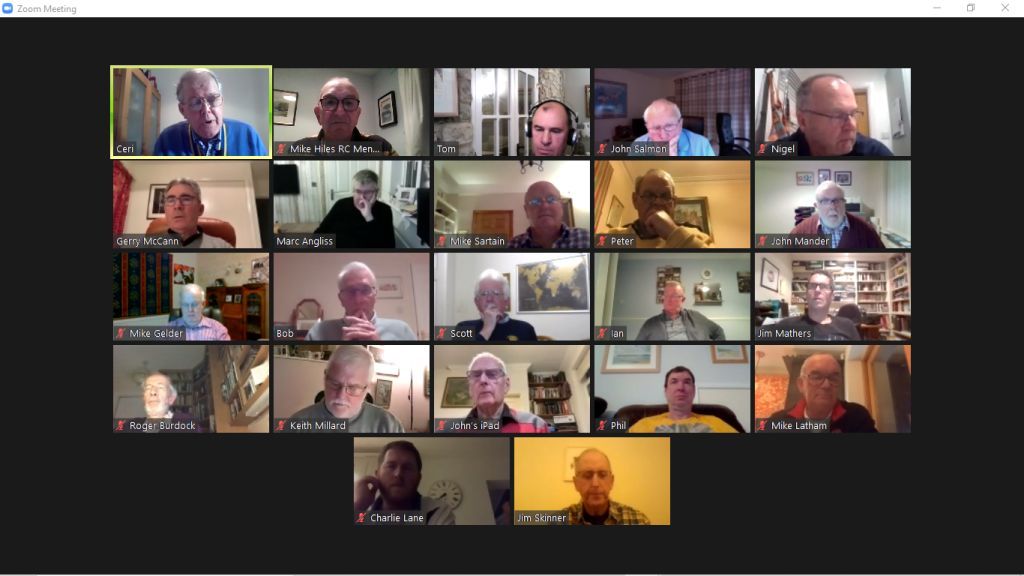 In a first for the Club Tom Elson was inducted into Rotary by Club President Ceri at the first virtual meeting of the year. Tom is an ex Round Tabler from Ealing. Members are looking forward to meeting Tom in person when we can meet again.

The Club updates the Stay at Home Signs 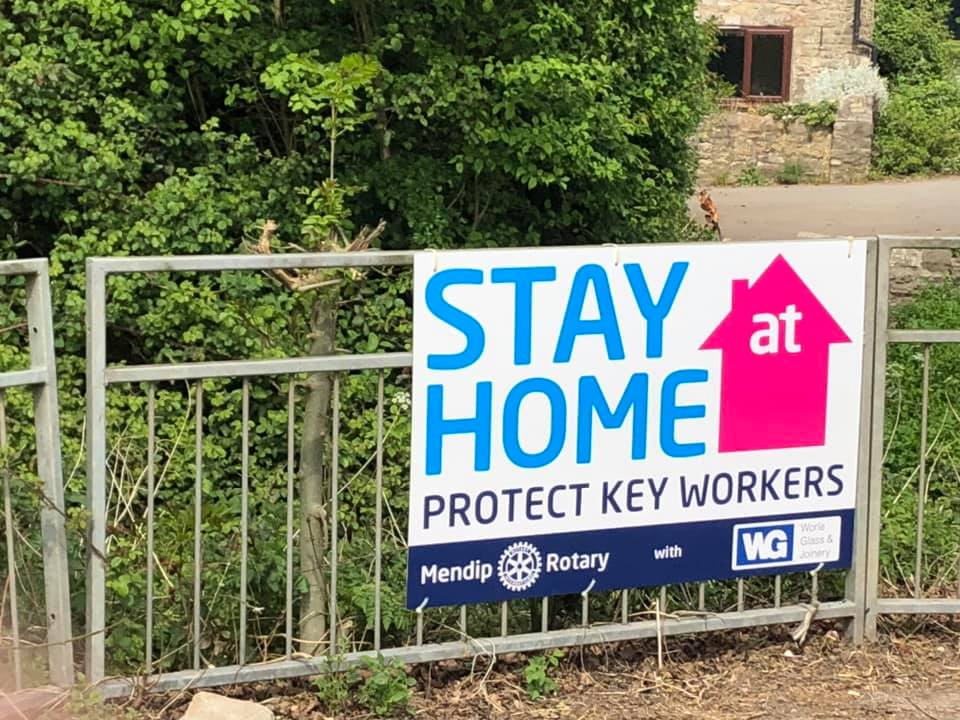 Following the added restrictions that came into force, the Club have modified the numerous advisory road signs that were installed locally last spring. We now reinforce the message to remind visitors and local residents that the risks are real. Stay at Home protect key workers. 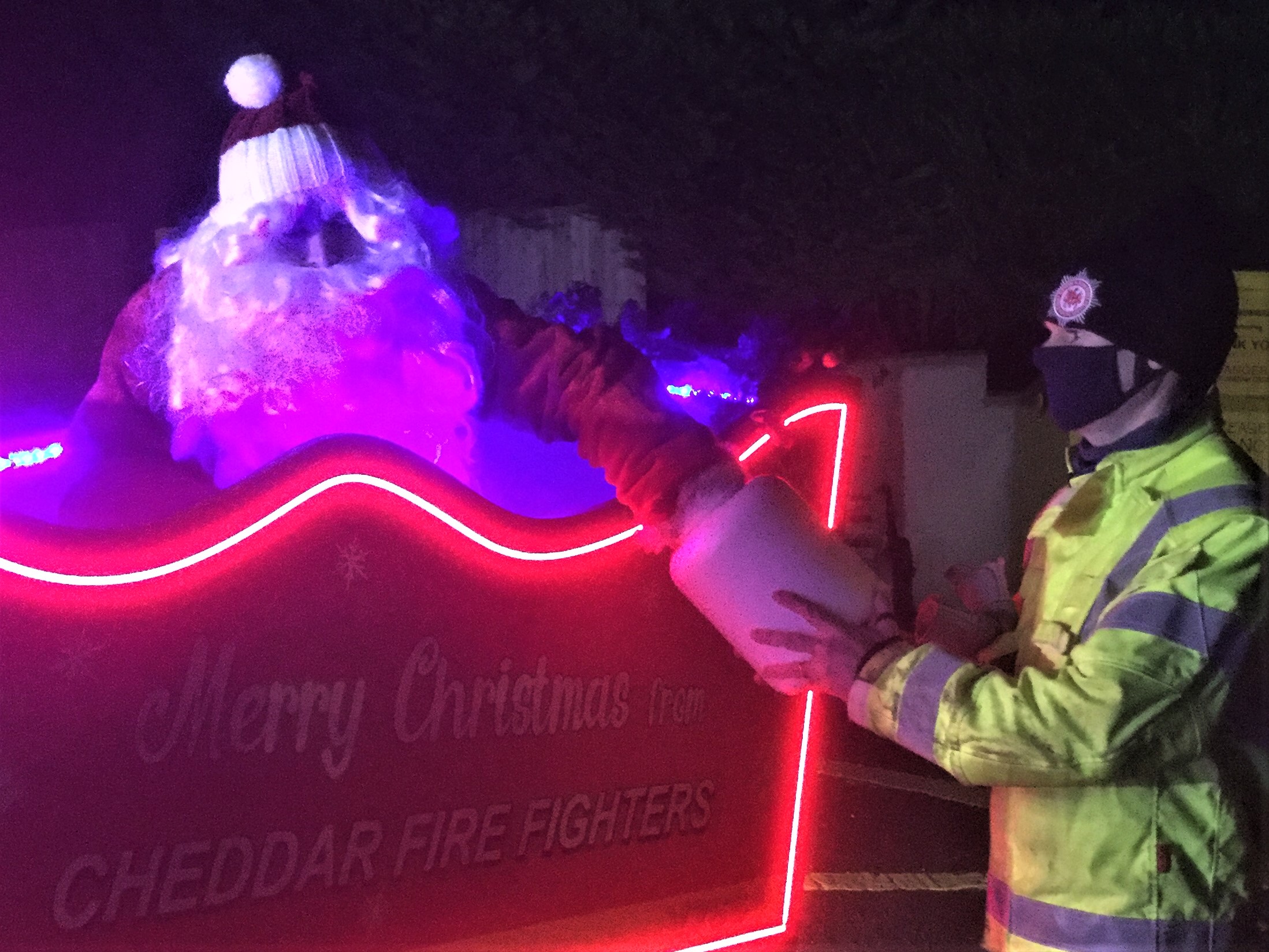 Santa draws number 63 for the December draw. Thanks to the Cheddar Fire brigade for brightening up Christmas with their Santa float. 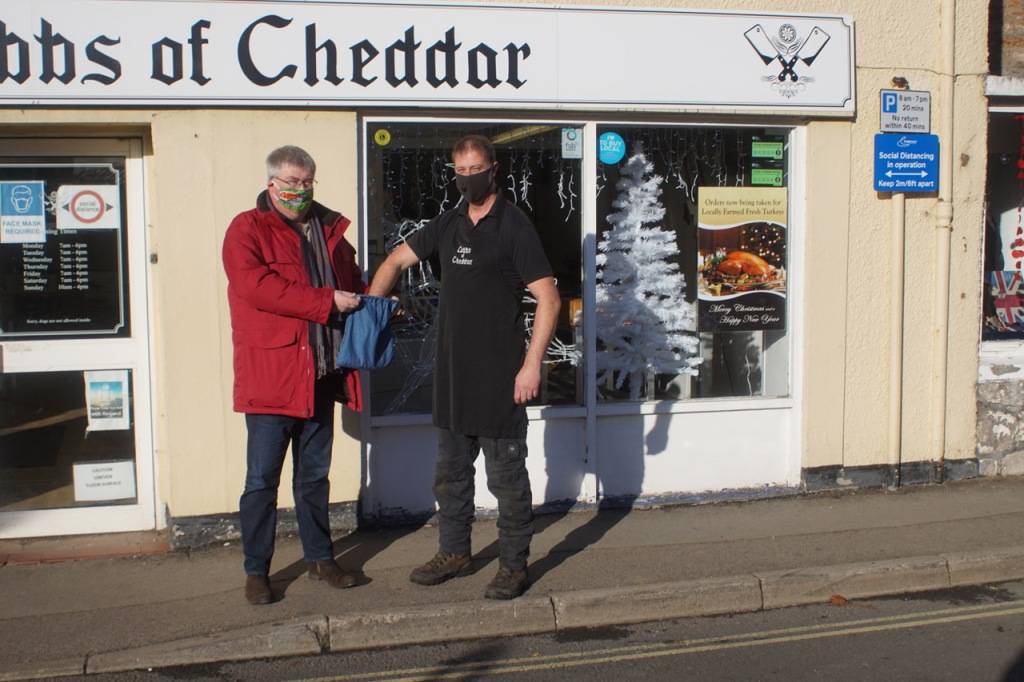 The November draw for the  75 Club was made by Cobbs of Cheddar. The winning number was 58. Half of the proceeds from the draw are donated to charities. 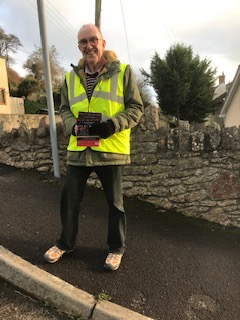 Members of the Club were out deliverying leaflets in support of the Cheddar Artists in their efforts to Make Cheddar Festive in these unusual times. The event is supported by the Chambers of Commerce, Cheddar Parish Council and Sedgemoor District Council.

Window Wonderland in the Cheddar Valley 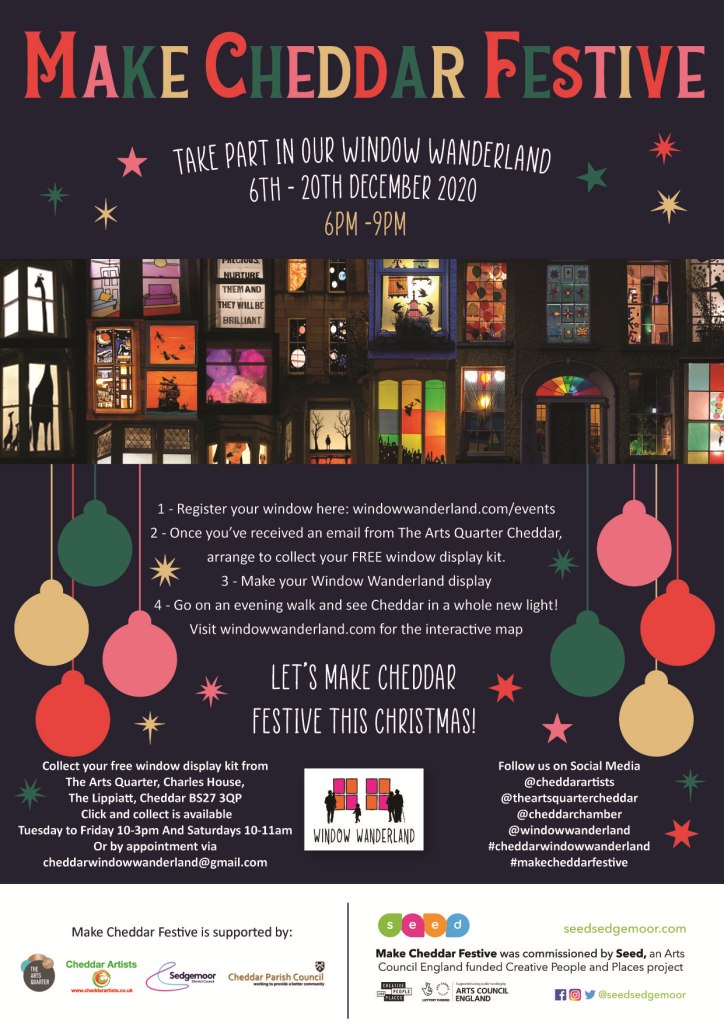 Cheddar Arts and The Art Quarter are endevouring to create an uplifting activity for Christmas. They are asking businesses and people within the Cheddar Valley to put a festive display in their windows and "Make Cheddar Festive". The event is supported by the Cheddar Parish Council, Chambers of Commerce and Sedgemoor District Council. To collect your free window display click and collect is available from The Art Quarter, The Lippiat. 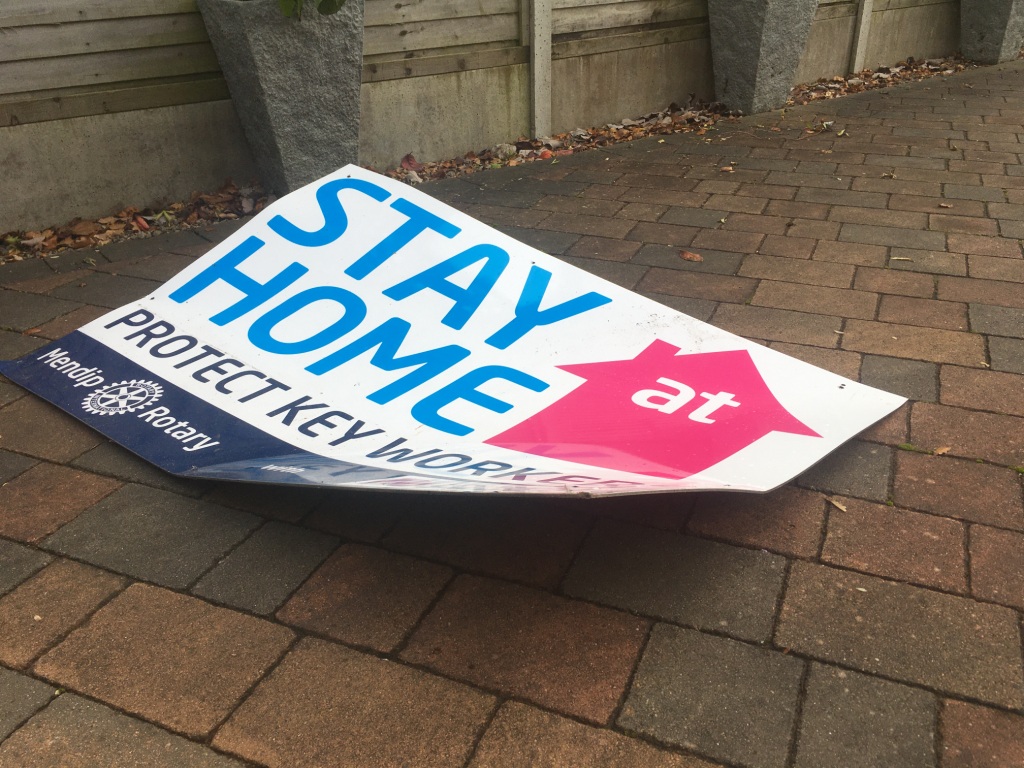 One of the signs erected by the Rotary Club of Mendip to remind people of the the need to protect the local community during the current pandemic has been vandelised and removed. Thanks to the staff at Cheddar Caves the sign was recovered and can be repaired and reused. 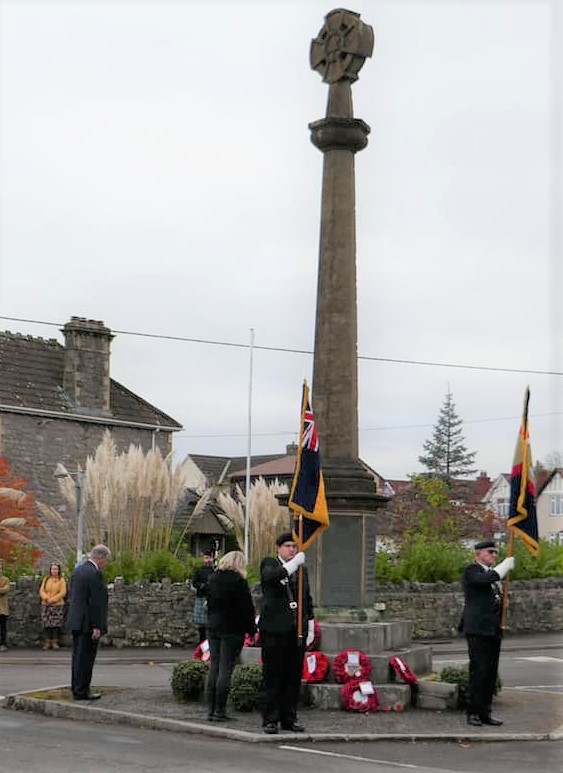 Club President Ceri Davies laying a wreath on behalf of the Club in Cheddar to remember all those who have fallen in conflicts.

The Club has placed a display in Cheddar Library to highlight World Polio Day 24th October 2020. The Club has been involved in Rotary,s drive to eradicate Polio from the beginning. Rotarian John Lane who was a well known business man in Cheddar was the original treasurer for the Rotary International Britain and Ireland polio initiative, with the monies raised being administred from Cheddar.

Do you know someone under 21 living in the Cheddar Valley who is an inspiration to others, perhaps providing extra help to family, friends and neighbours in our community during the Covid crisis, or providing help and support to charitable causes? It may be someone who deserves to have their contribution recognised by our community and who perhaps goes the extra mile to make a difference to the lives of others. If so, you could Mendip Young Citizen Award to celebrate the impact they make. Consent from a parent or guardian will be needed for the nomination of anyone under age 18. Nominations close on 31st December with results in January. The winner receives a cash prize of £100 plus £100 to donate to the charity of their choice. Other nominations may receive a certificate of merit. 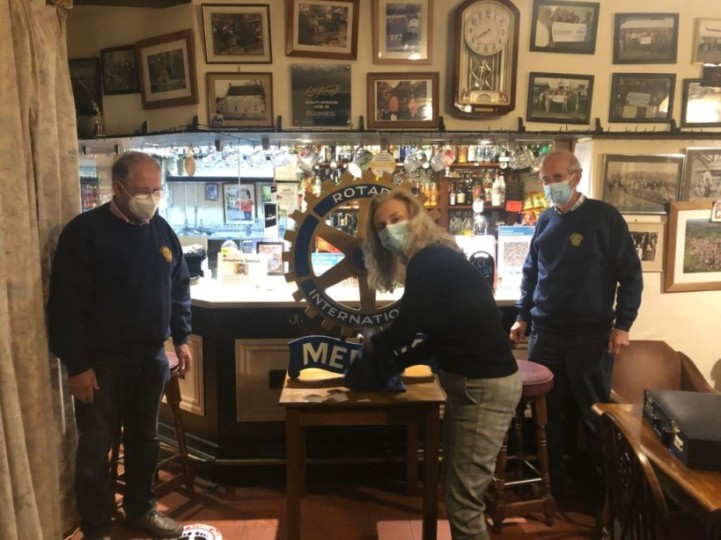 As a result of the Coronavirus pandemic the Clubs ability to generate funds for good causes has been reduced. The Club will celebrate it's 75th charter in October 2020 and President Ceri has introduced a prize draw with 75 people contributing. Half of the monies generated will be given to good causes. The first draw was held on the 24th September with the winning number 27. The landlady Lori of the Clubs venue The Strawberry Special Draycott drew the winning number with President Ceri Davies and Rotarian Roger Burdock in attendance. 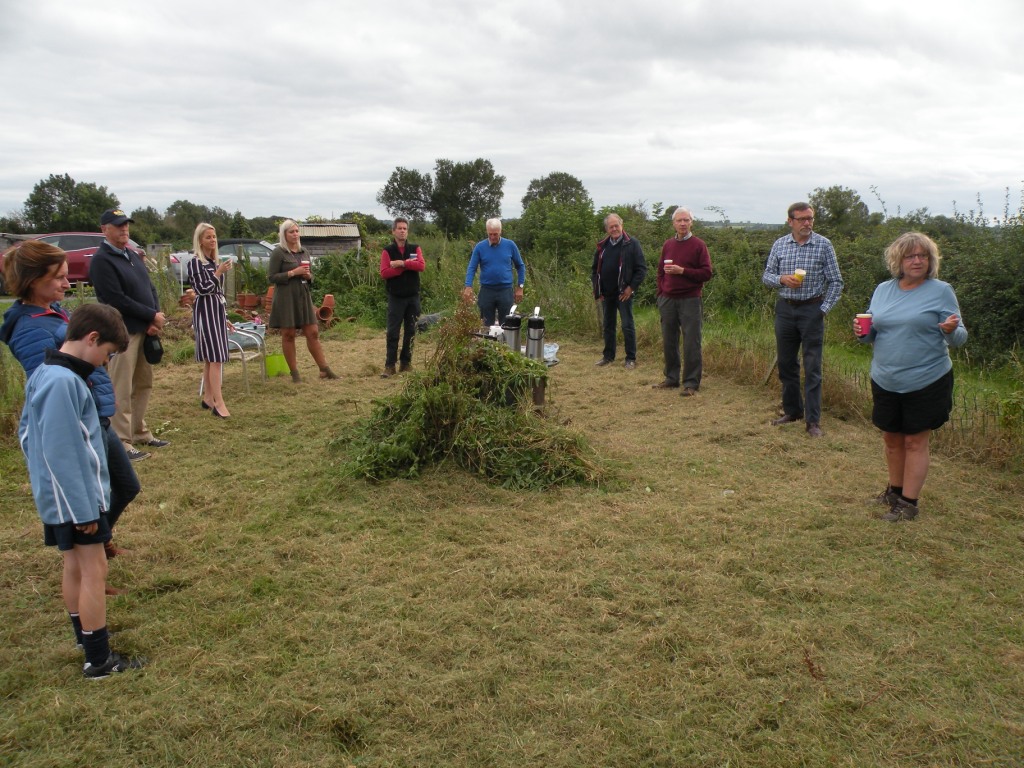 The Presidents Charity for 2020-2021 is the Space Charity which is helping young people in the Cheddar Valley. They have recently obtained an allotment and the Club will be assisting with its development. The Club will assist in fencing the area, helping to purchase a shed and some gardening tools. Members will also be involved in turning the plot in to a vegetable garden with a safe area for the young people.

The project will be undertaken in partnership with the Kings of Wessex Academy.

The Club were privilaged to have as their guest speaker at last Thursdays zoom meeting RI President Holger Knaack. Holger outlined his vision for the future of Rotary and answered questions from members of the Club and guests. Holger was in Round Table and is a keen supporter of Rotaract. An enjoyable evening of Rotary Fellowship.

Following investgations by International Chair Mike Latham to determine which NGO was on the ground the Rotary Club of Mendip have sent £500 within days of the massive explosion in the docks in Beirut. The monies were sent to the NGO Medicin Sans Frontieres, to assist with their work in helping those injured in the blast. Thanks have been received from MSF and Rotary Clubs in Beirut.

Local businesman Mike Sartain was inducted into the Rotary Club of Mendip last Thursday by Club President Ceri Davies. Mike was sponsored by Rotarian Nigel Deane. The induction was carried out under the “new normal” conditions of social distancing outside at the Strawberry Special where the Club meet. In line with Government guidlines only three other members were in attendance, Mike Hiles Membership Chair, John Mander Secretary and Scott McIntosh Treasurer. In these unusual conditions a risk assessment was prepared with plenty of anticeptic wipes and gel available. Mike had to pin his new Rotary badge on himself another first. Following Mike’s induction into Rotary those in attendance had a good socially distancing fellowship evening to welcome our new Rotarian. 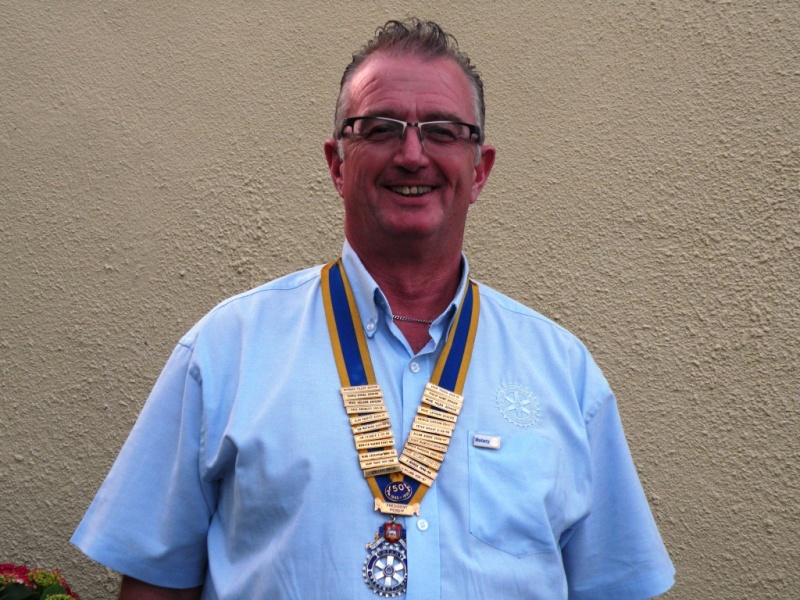 Rotary is a global voluntary organisation with over 1.2 million members supporting a very wide range of community-based projects large and small, whilst at the same time providing its membership with fellowship and friendship.

The Club has donated £250 to the Childrens Hospice South West who support families in the Cheddar Valley through difficult times. The Hospice has seen a reduction in donations as a result of Covid 19. 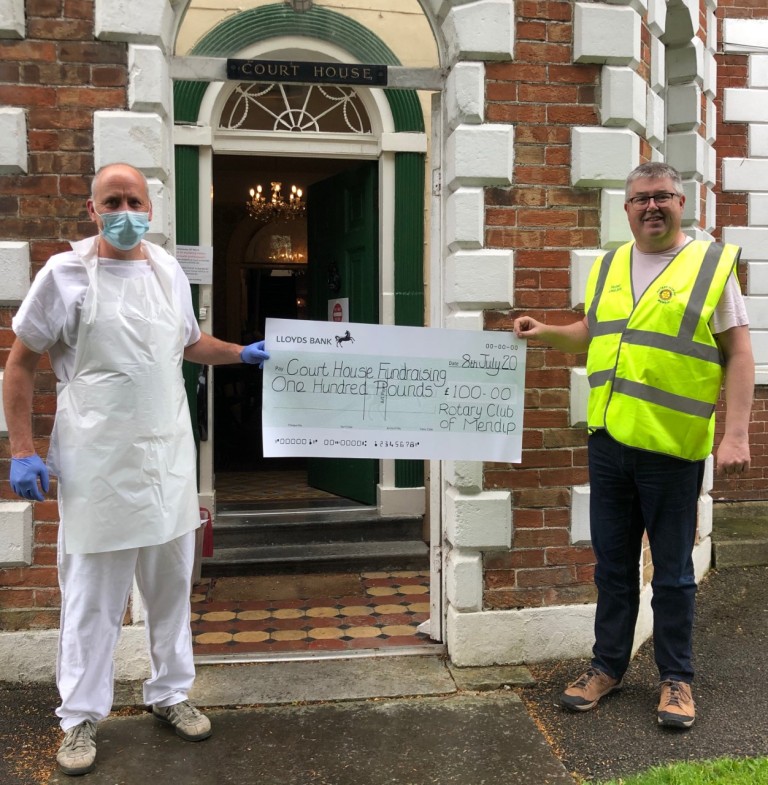 The Club has presented a cheque for £100 to the Court House Retirement Home nominated charity. The care workers stayed inside the home during the Covid pandemic to look after their residents, not seeing their families for weeks. During this period they raised monies for Weston Hospice Care.

Anwar cooks a fourth batch of curries for key workers

This year mendip Rotary Club is celebrating its 75th anniversary. Anyone living in the Cheddar Valley wishing to find out more about the Club should visit our Facebook and Twitter pages. 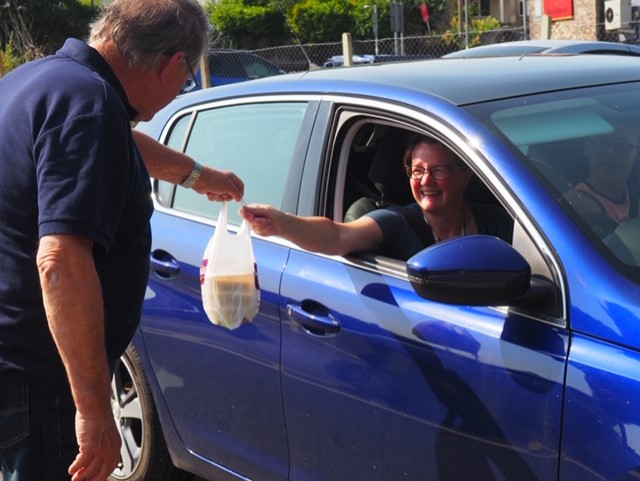 Rotarian Anwar Hussain cooked a third batch of his free Curries for local NHS Staff & Carers in the Cheddar Valley, on this occasion, the Rotary Club of Mendip were very pleased to both sponsor & help distribute the curries.  The meals were prepared by Anwar  and brought to the distribution location, where they were given out at a safe distance. Rotarians were on hand to ensure correct social distancing, with the recipients being directed to a holding area while their food was placed on a table. They then collected it after the Rotarian had moved back. Rotary in Action. 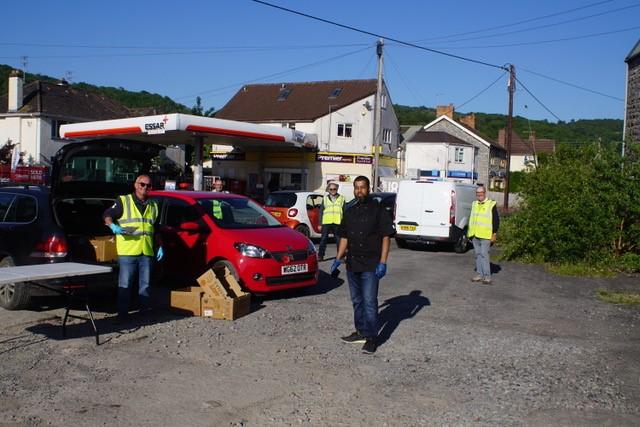 The Club amends the road signs to reflect the revised guidlines

Following the revision of the Government guidelines the Club has amended the road signs to relect the new message. Stay alert and keep 2 mtres apart. Protect our key workers. 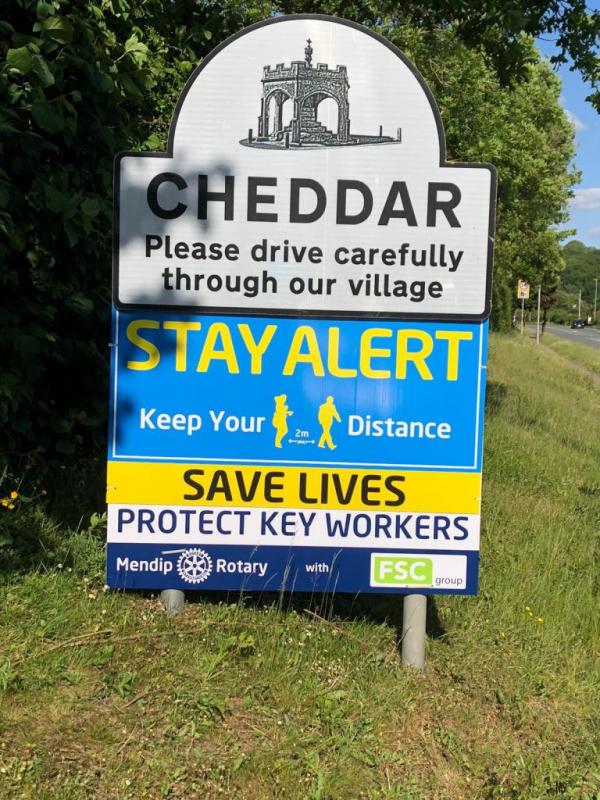 After sending laundry bags to Stroud Hospital the Club were contacted by the Renal Unit St. George's Hospital Tooting. The Club with members of Inner Wheel together with Pam Salmon ex Ladies Circle and Gill Latham Past President Inner Wheel 30 bags were delivered 3 days later. The staff were very appreciative of the bags. 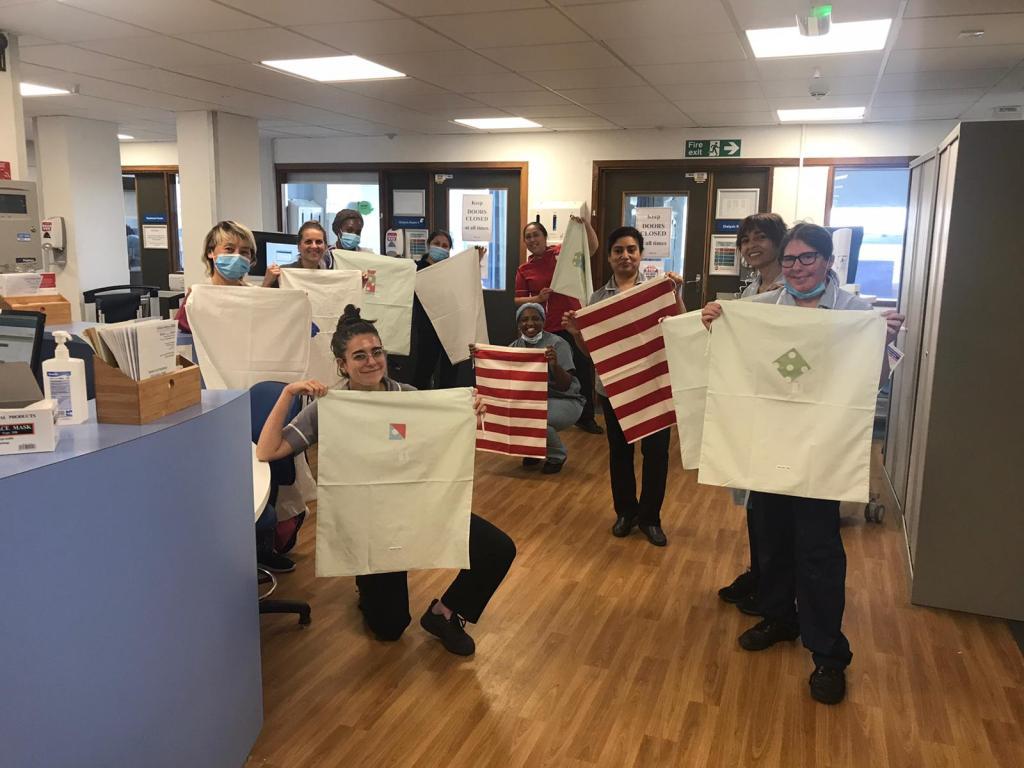 Rotarian Roger Burdock and his wife Jane a member of Inner Wheel organised a socially distancing street party to celebrate VE day. It was organised to celebrate peace and understanding to support Rotary peace scholars.