Located in the picturesque market town of Market Harborough, Leicestershire, England we are a thriving and friendly Rotary Club which welcomes visitors from all over the world. We are proud of our club and the contributions Rotary makes to communities both locally and abroad by living up to its motto "Service above Self".

We are a group of local men and women who work together to make other people's lives better. We do this as one branch of the world-wide family of Rotary with over 1.2 million members. We work in an atmosphere of dedicated service, coupled with fun and fellowship to the highest ethical standards.

In 2011 we held our first SwiMarathon, a community fundraising event held at the Harborough Leisure Centre. This was a fantastic success raising enough money for us to be able to give a total of almost £70,000 to good causes between 2011 - 2019. It is not an endurance swim, rather a fun team activity, for all ages, where each team swims relay style in one lane of the pool for just one hour, getting sponsorship for doing it. 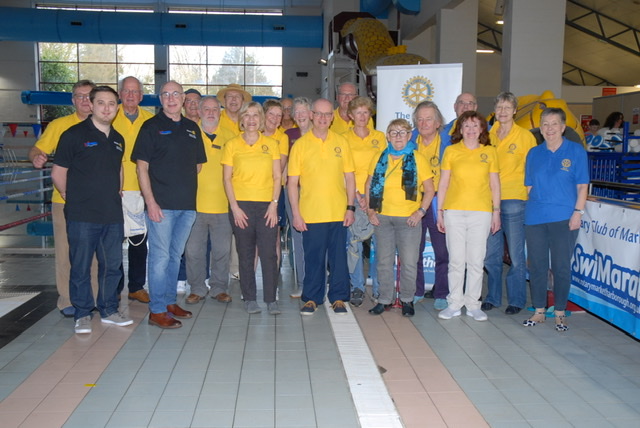 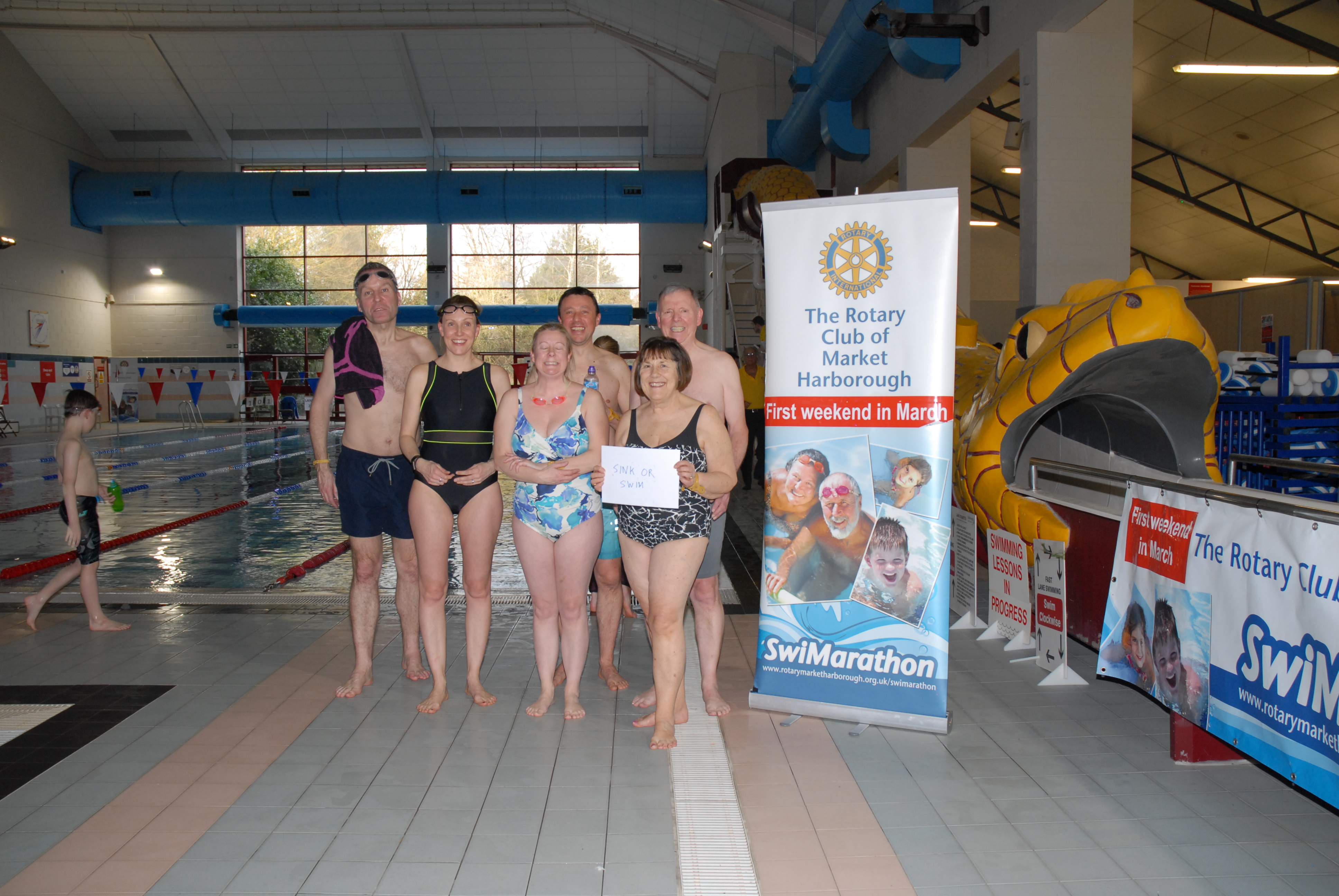 A huge thank you to everyone who took part and to our business sponsors, without whom we couldn't put the event on:-

TO APPLY FOR A GRANT for a local good cause or Charity email Carole at carolebaldam50@gmail.com.

THE CLOSING DATE FOR APPLICATIONS FOR A GRANT HAS BEEN EXTENDED UNTIL 1 SEPTEMBER 2020. 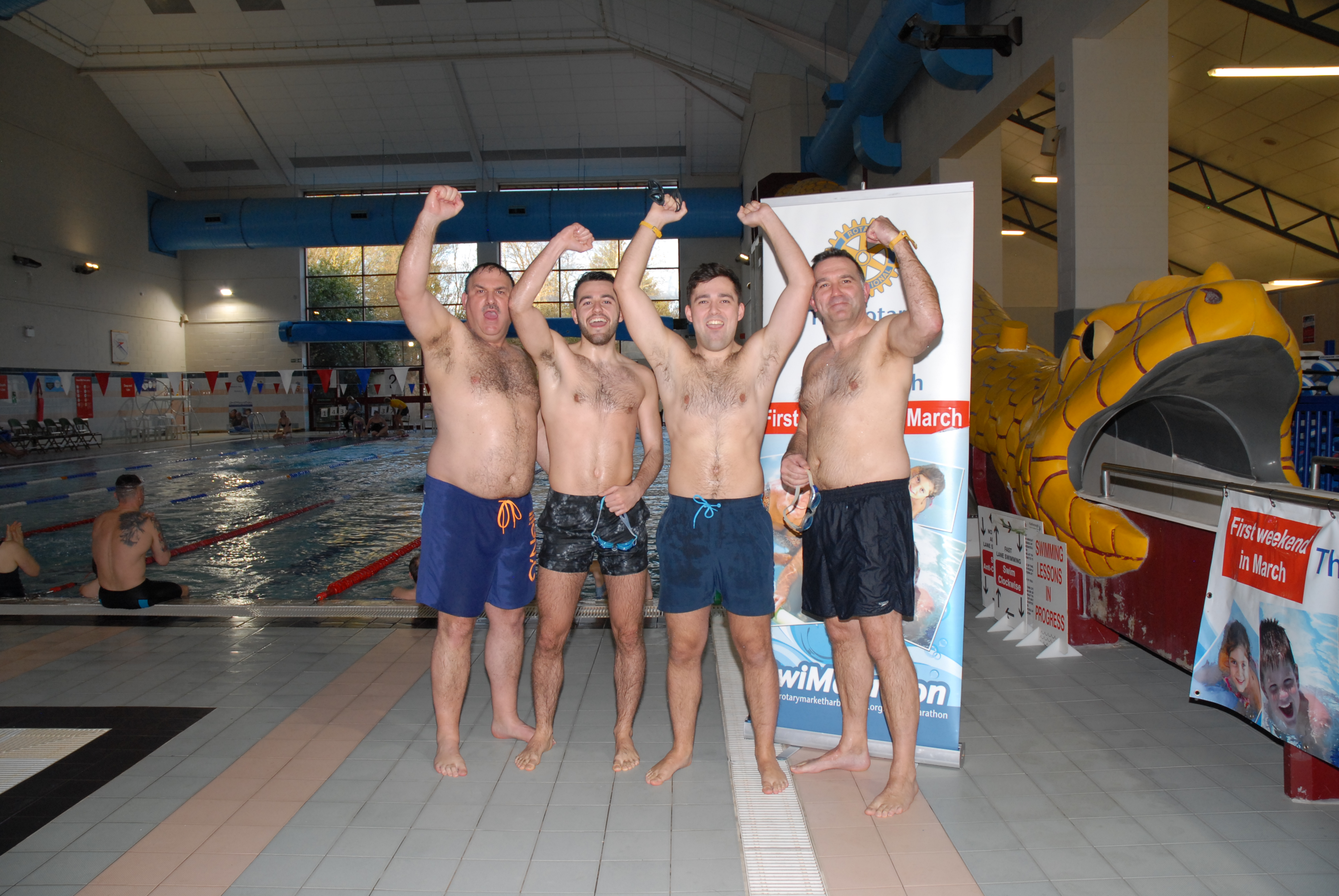 Local newspapers are important to spread the word about Rotary. In Market Harborough recently, the Rotary Club got double value in its weekly newspaper The Harborough Mail.

The club runs an annual SwiMarathon fund raiser. In 2020 it happened just before lockdown, in March. That was fine, and there was good coverage in the newspaper. The money raised is given away to local organisations, and this had to be delayed. There were many reasons. The swimmers could not collect all their sponsorship money, and organisations did not meet to plan their application for a grant.

However, the grants were finally awarded in September, mostly using bank transfers. The club were proud to publicise this and submitted an article to the local paper and radio station. The picture sent with the article was from the event itself back in March.

It was excellent publicity to get the story printed on two facing pages. The two stories were similar, but not the same, and the two photos were similar, but not the same. So, the report sent in by the club’s publicity officer was only used once, and the newspaper re-produced the item they published in March. Importantly, the list of grant recipients was includedwith one story, and news of Rotary giving local service to the community was clear!

Press release from the Rotary Club of Market Harborough.

The award of a Paul Harris Fellowship was given to Rotarian Leslie Dodd at the Market Harborough Rotary Club’s annual dinner to celebrate its birthday. The meeting was by zoom, so the medal, certificate and badge could not be handed over in person, but President Gillian Bindley said “I consider that the presentation of the award to Rotarian Leslie Dodd will be a means of showing our gratitude for his willing dedicated service to the objects of the Rotary Movement.”

Les has been Rotarian since 2002, and president of the club twice, in 2009-10 and 2015-6. He has led the club’s work on youth activities for many years. During this time he has visited many local schools. He has been persistent in maintaining connections with schools, especially in organising competitions such as Young Musician, Young Writer and Young Scientist.

He initiated and project managed the presentation in 2020 of a 'Rotary Peace Pole', now installed in the grounds of Great Bowden Academy.  All local primary schools have received a copy of the illustrated book 'The Lost Words' and he has managed the awards to pupils of “Rotary Stars” over many years.

Before retirement, Mr Dodd was Head of Learning Resources at Robert Smyth Academy, where he had taught from 1974 to 2005.  He is well known in the Market Harborough for his performances at the Harborough Theatre and for activities at St Dionysius church and with U3A walking groups.

The Paul Harris Award is named after the founder of Rotary International, Paul Harris. He formed the first Rotary Club in America in 1908. The award is given by club members to recognise outstanding contributions to the purposes of Rotary: Service above self. At Market Harborough club the practice is to make the award a surprise to the recipient, so Les had no warning the award was to be made.

New laptop computers have been given to each of three local primary schools by the Rotary Club of Market Harborough. The laptops will enable the schools to increase the scope of their home-schooling, so that pupils currently without computers will benefit.

Deputy head of school at the C of E Academy in Fairfield Road, George Norman, said “We are really very grateful for these laptops. These will go out to children so they can all access the learning being offered by the school.” Children from year 6, Maria, Thais, Billy and Sean, received the presentation from President Rotarian Gillian Bindley.

At St Joseph’s school, in Coventry Road, James, Isla and Angelica from year 4 received the computers and said they would be used mostly for homework, assembly and learning. Head of school Karen McVea said “Thank you very much to the Rotary Club. They will go to children in families where there is real need for more than one device.”

Head of Little Bowden school, Colin Miller said “We are really pleased to get these. They will be used to help disadvantaged children with their remote learning. It is amazing the difference they will make, especially for families needing more than one device for online education at home.” Children Maiya and Charlie received the computers on behalf of the school.

The laptops were purchased from local company Arkel Computer Services, of Granville Street, Market Harborough. Arkel director, Peter Arnold, said “Arkel has been supplying high quality computer services to local schools and colleges for many years. We are delighted to support the Rotary Club in donating this equipment to primary age children.” Arkel are also providing after sales support for the computers.

The money used to purchase these laptops was raised by the Rotarians from the club’songoing fund raising plus several events, including the latest SwiMarathon held in March 2020, just before the first lockdown. The club’s contribution of £1,010 was matched by a contribution of £1000 from the Rotary District Foundation Fund.

Rotarian Gordon Etherington, who led this project, reported how pleased the club is to provide these 6 laptop computers to benefit the education of local children. “Supporting education is currently one of Rotary’s worldwide targets and we are very pleased to be able to help in this way.”

Get the Rotary Club of Market Harborough app!