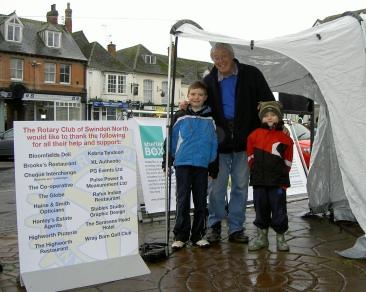 Congratulations to Rotarian Terry Williams.  For his voluntary services to the Community, Highworth Town Council and Highworth Community have made him their CITIZEN OF THE YEAR.  The award was made at the Civic Service in St. Michael's Church, Highworth on Sunday 10th June.  See the Swindon Advertiser: "Rough sleeping Rotarian honoured for campaign"

In a unique and brave fund-raising venture Rotarian Terry Williams camped 24/7 in a ShelterBox Emergency Tent in the Market Place in Highworth for 7 days and nights in February 2012. He did it to raise funds and awareness for the disaster aid charity ShelterBox. ShelterBox is unaware of any fund-raiser ever having camped out for more than one night, and definitely never in the middle of winter. 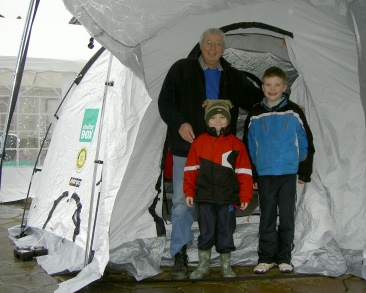 TERRY SAYS: "I had some wet days but generally the weather was kind to me. Apart from my first night I slept very well indeed. I had lots of visitors and some very generous donations and I want to say a huge thankyou to everyone who supported me and contributed to the fantastic sum we have raised. You can see a video diary of my week on Swindon Web"

ShelterBox is an international charity providing shelter, warmth and dignity to thousands of people, all around the world, who have been made homeless by natural and man made disasters. The Rotary Club of Swindon North has supported ShelterBox for many years. A ShelterBox costs £590 and Terry has single-handedly raised enough money for the Rotary Club to buy many more. 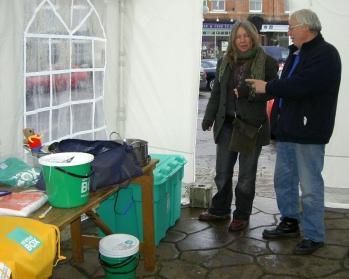 Terry had scores of visitors whilst he was camping in the Market Place and he is delighted that people have been so generous.  Amongst those that came to see him were children from Westrop Primary School, also cubs, beavers and scouts and the Rotary Club held its regular weekly meeting alongside him in Highworth Market Place.

Terry's fund-raising target was £2,000 but he well and truly smashed that.  Currently the amount raised stands at more than £8,800. This will enable the Rotary Club to buy 12 ShelterBoxes and also send a 4-figure sum to the the END POLIO NOW Campaign.  When it was all over, Tom Henderson, the founder of ShelterBox, phoned Terry from his office in Cornwall to congratulate him on his supreme effort and to offer a personal thank you.

A Quiz in aid of ShelterBox held in Highworth on 24th March added another £500 to Terry's fund.  Rafus of Highworth donated a Curry Supper for all who attended. The winning team was "Serendipity" (pictured).  A similar sum was added by the Highworth all Churches Group which donated the proceeds of their Lent Lunches to Terry.

If you would like to make a donation to support Terry's "Living in a ShelterBox Emergency Tent" campaign you can do it online via the Rotary Club of Swindon North's BTMyDonate page. Click here to proceed.

Rotarian sleeps rough and raises over £8,000

more Rotarian sleeps rough and raises over £8,000 for the emergency aid charity