News Update on Thanks For Life

Rotary clubs in Great Britain and Ireland (Rotary GB&I), and the rest of the world, have succeeded in raising USD$200 million in new funding for polio eradication.

The fundraising milestone was reached in response to a USD$355 million grant from the Bill and Melinda Gates Foundation, set in 2007, which would be given if Rotary had raised USD$200m by June this year. All funds have been earmarked to support polio immunisation activities in affected countries where this vaccine-preventable disease continues to paralyse children.

In addition to delivering the promised USD$355m challenge, an additional USD$50m from the Bill and Melinda Gates Foundation is being committed to the global fight against polio. This brings the total funding to USD$610m for polio eradication.

Rotary members not only reached into their own pockets to support the challenge, they engaged their communities in a variety of creative fundraising projects, such as Thanks for Life and other community based events.  As has been reported previously the Rotary Club of Douglas has engaged with schools on the Island, and the wider local community and has raised some 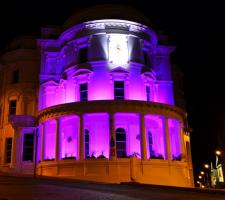 To mark World Polio Day our Club held a special lunch on 22nd October at which we put on show 2 Iron Lungs and also unveiled the football strips which the Ellan Vannin team will wear endorsing the End Polio campaign. Two iconic buildings were lit purple. 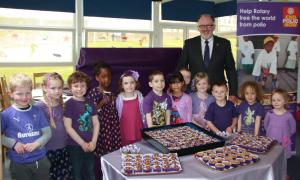 Douglas Primary School, Scoill yn Jubilee raised funds for End Polio by holding a cake sale and Dress Purple Day. Thanks to the hard work of the cake bakers and the enthusiasm of the staff, pupils and their families £890 was raised - fantastic. 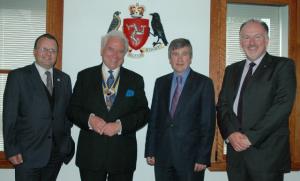 Thanks For Life - Press Release

Following the granting of matching funding from the IOM Government Overseas Aid Committee, a Press Release has been issued to local media. The Press Release can be seen under 'News' on manx.net and hopefully will appear in the newspapers and on radio. 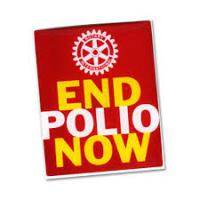 For 2011 Douglas Rotary Club is focusing on getting our message into the local Secondary Schools and the IOM College, including KWC & Buchan. During February 6,000 school children will hear about Rotary's campaign to End Polio Now. 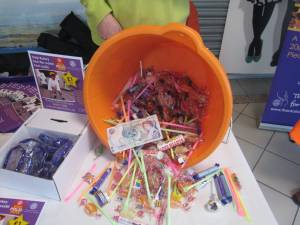 Club members (together with some additional family members) made collections in the Strand Shopping Centre and outside Shoprite/Iceland in Market Street from 9.00 am until 4.00 pm as part of End Polio Day. A total of £400 was collected - a great effort!