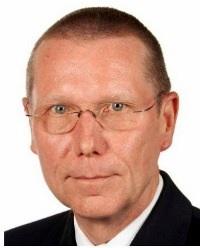 Our guest speaker calls himself a Military Diplomat, which he admits sounds like a contradiction in terms. He enlisted with the Bundeswehr (German Armed Forces) in the early 1970s, followed by studies at the Bundeswehr University (MBA) and later the Fuehrungsakademie in Hamburg. He held various commanding positions on naval ships and at military bases.

Before his assignment as the Defence and Naval Attache at the German Embassy in London he was in charge of the Federal Ministry of Defence Naval Staff. He and his British counterparts work together in defining and structuring the future relationship between German and British Forces, while some British forces were still stationed in Germany until fairly recently. There are projects and agreements on strategy, like international security, joint operations, information sharing, the joint rapid development force, marine surveillance, procurement, to name a few. He also pointed out cultural differences between Britain as a former colonial power and his country, for instance the Lancaster Agreement stipulates the cooperation between France and Britain as the two countries with nuclear weapons. Both France and Britain were militarily engaged in Libya, now a country in anarchy, that he calls "The supermarket for weapons dealers".

There are always about 200 German people in the UK working with British counterparts on technical, operational and strategic cooperations. As a military diplomat he also takes the task in interpreting decisions on military actions by the German Parliament or the Chancellor should questions or misunderstandings arise at his British counterparts. Karl-Wilhelm Ohlms is a fellow Rotarian and Past President of the RC Bonn-Museumsmeile, Germany. Our members also warmly welcomed his wife Baerbel.