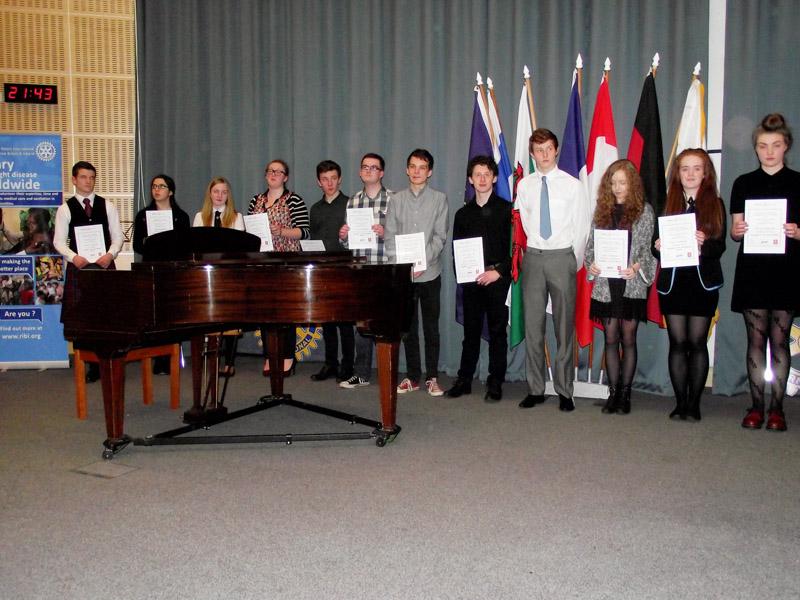 YOUNG MUSICIAN OF THE YEAR & FESTIVAL OF YOUTH MUSIC COMPETITIONS 2015

The Club is delighted to continue to organise local music competitions, the aim being to encourage 11-17 year old vocalists and instrumentalists to gain experience of public presentation and competition by performing in front of an audience.

We contact and invite the local high schools to submit up to three entrants for each of the two categories - vocalist and instrumentalist. The club event is the first round of several prior to Area, District, Regional and National finals, the winners of which are crowned champions of Rotary International of Great Britain and Ireland.

In recent years several successful competitors from this area have gone on to study music at the The Royal Conservatoire of Scotland.

The Club competition for 2015 was held in the Students Association building at Heriot Watt University at on 23January 2015 and was open to the public. It is always most enjoyable and the standard and self-confidence of these young people is remarkable.

The winners of the two categories receive a trophy and cash prize and were invited to go forward to our Area final (Clubs from Edinburgh and the Lothians) on the evening of 18 February at Heriot Watt University Lecture Theatre 4.

Some nineteen young people sponsored by ten Rotary Clubs competed in this Area Final. The standard of music was very high.

The winners of the two categories were from our local area: First Instrumentalist was Christopher McVinnie from Currie Community High school. First Vocalist was Sam Malone from Broxburn Academy. The runners up were vocalist Bethan Townsend sponsored by Musselburgh Rotary Club and instrumentalist Jamie Macdonald sponsored by Corstorphine Rotary Club.

These four winners went forward to the South of Scotland District Final, which covers all of the Southern Scotland Rotary Clubs, held once more at Heriot Watt University on Sunday 8 March.

Read a report on the District Final here