Shoe Boxes from Junior and Infants Schools. Plus Letter of thanks from Honeypot. 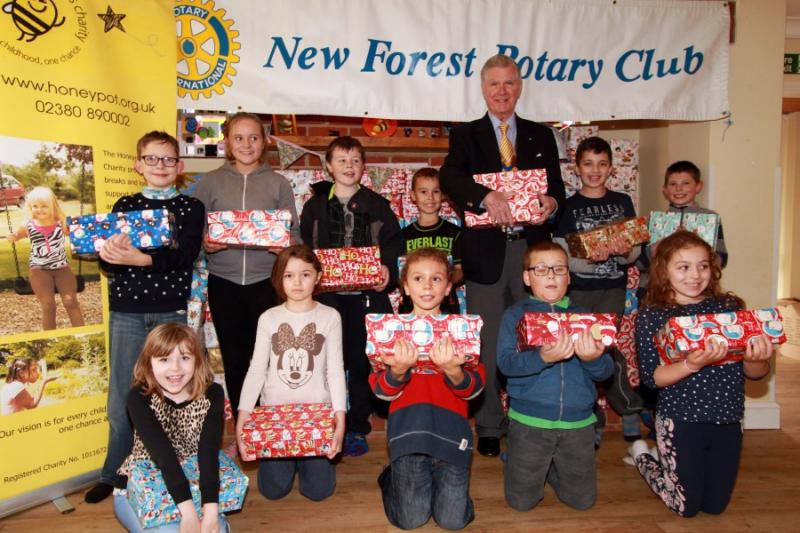 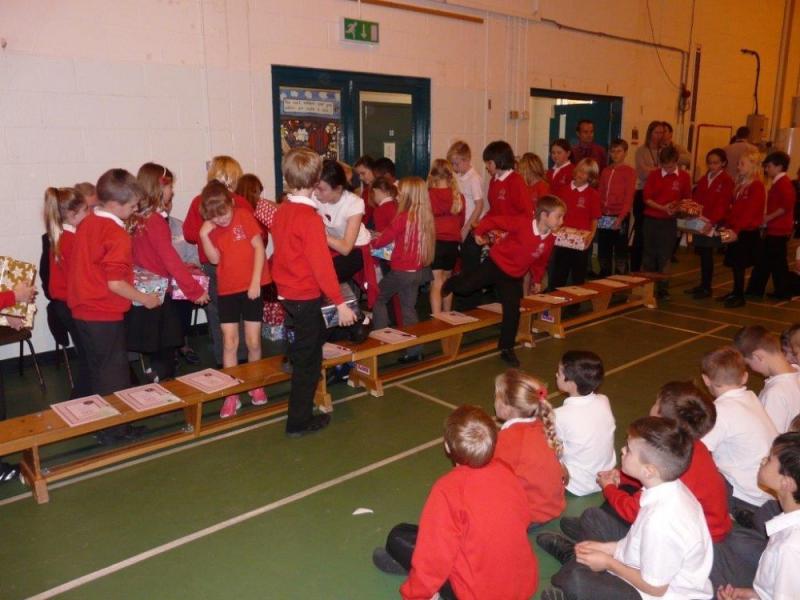 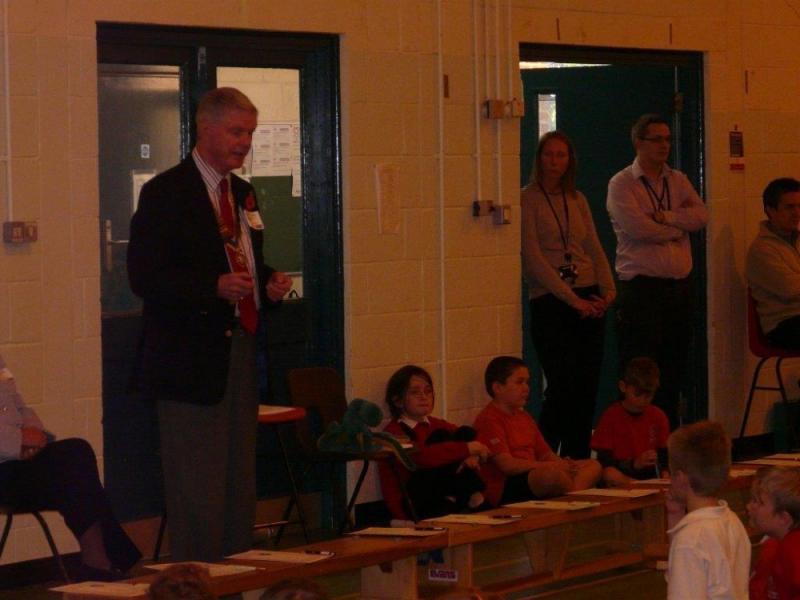 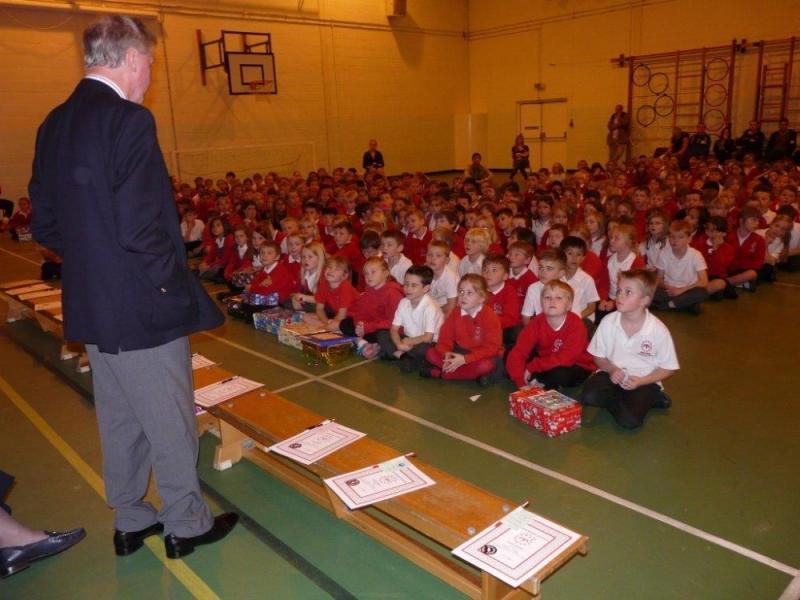 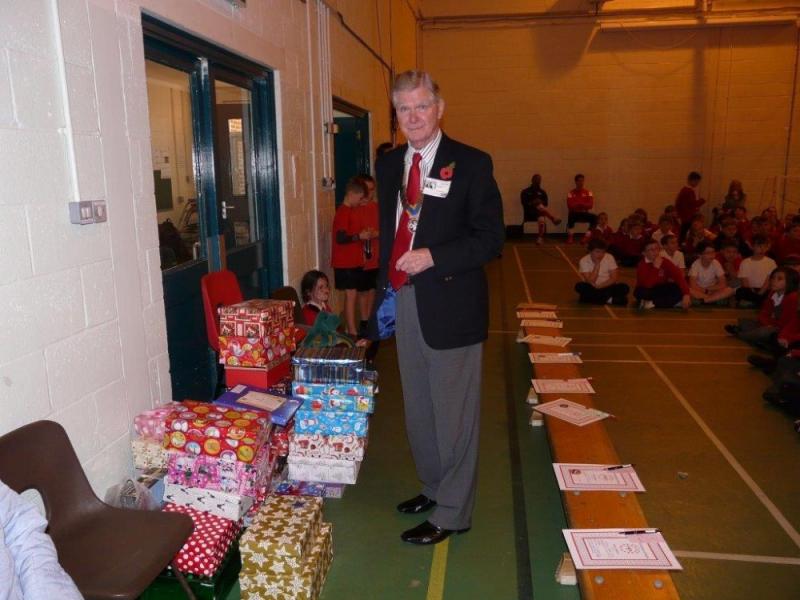 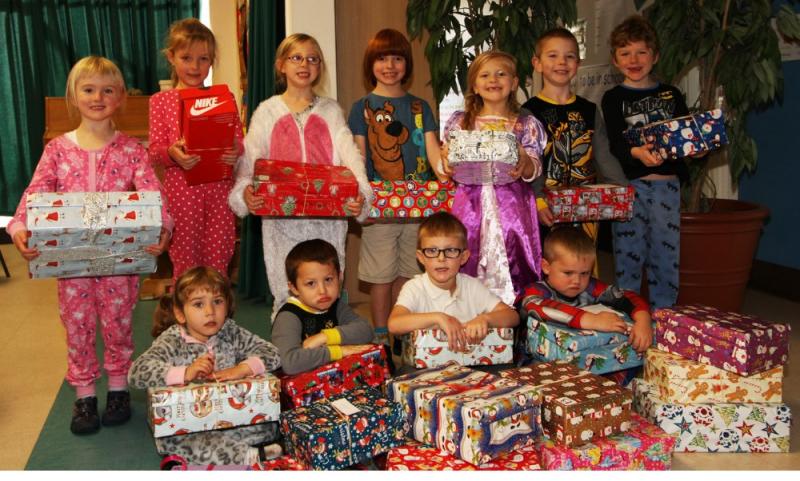 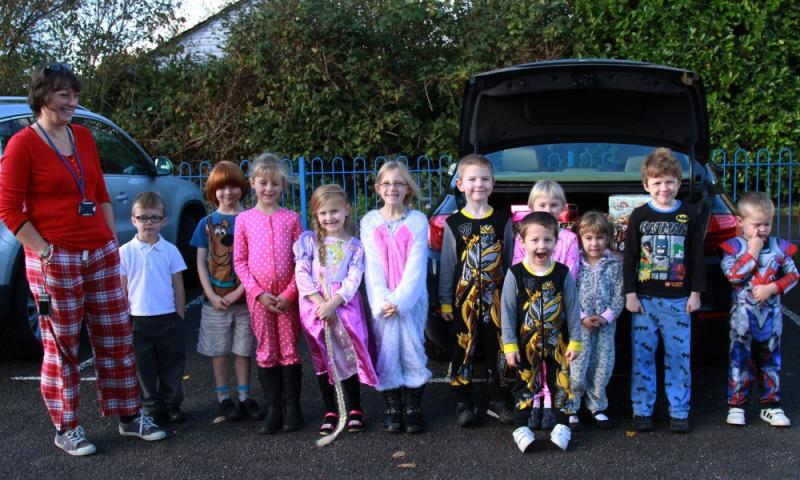 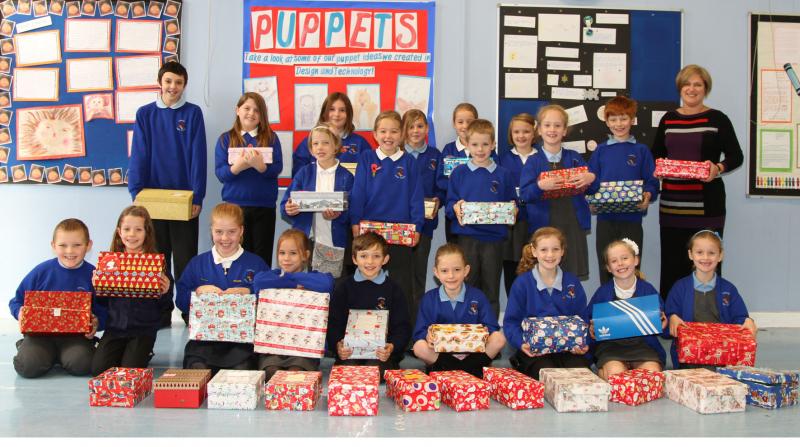 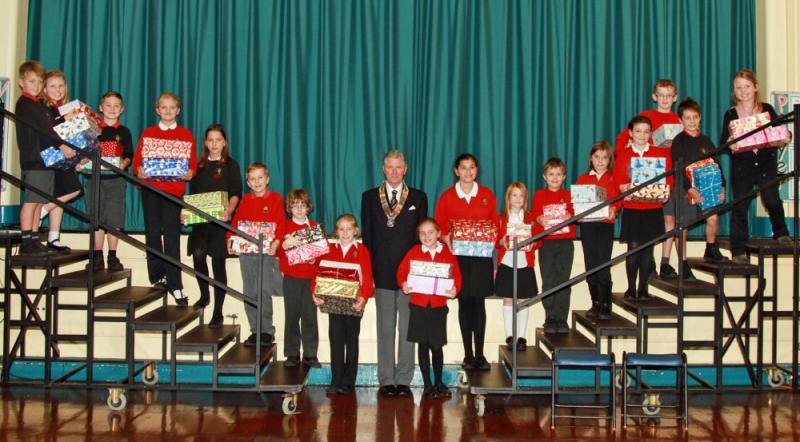 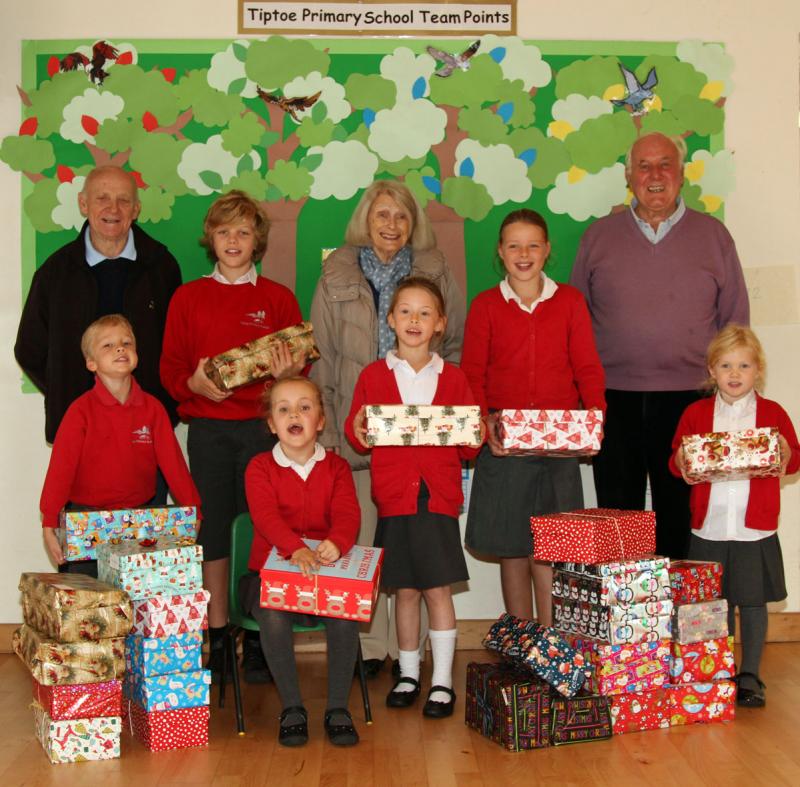 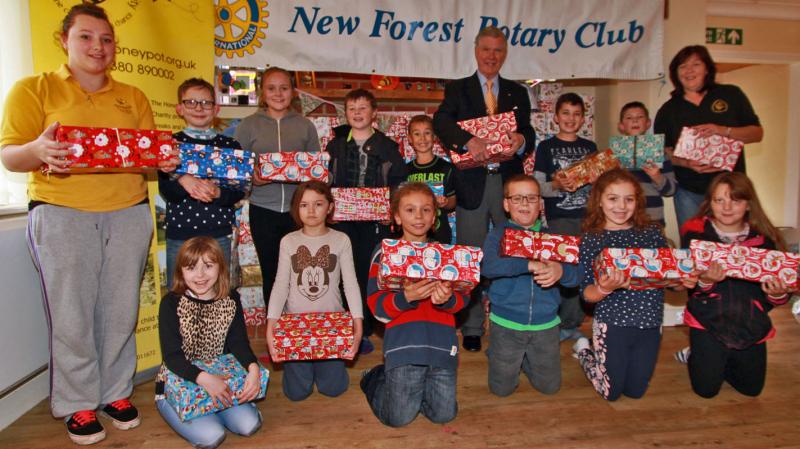 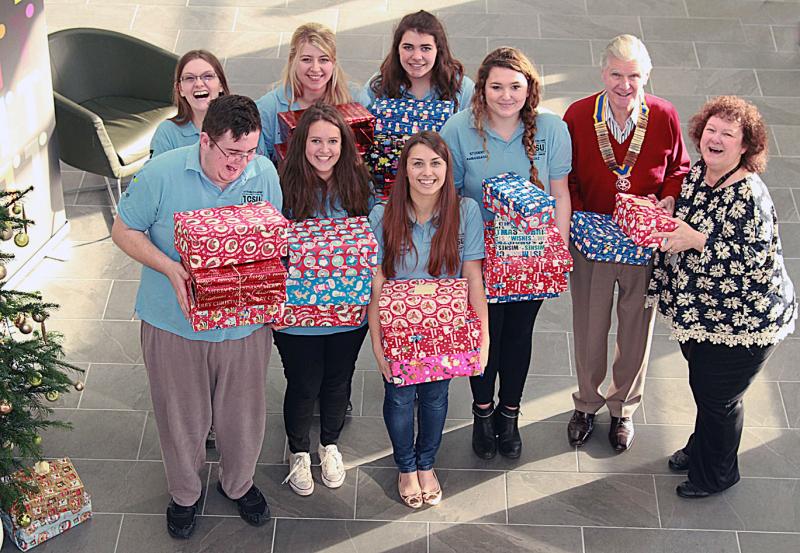 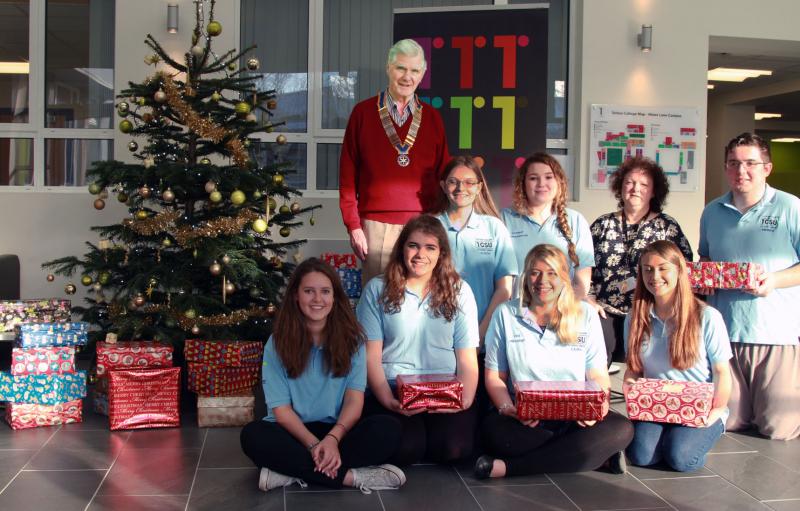 FINAL NUMBERS = "The 2014 Christmas Shoebox programme has been completed with 714 boxes given out to Honeypot children.This compares to 534 last year, so an excellent increase. We have had a letter of grateful thanks from Honeypot that is being sent to participating schools. Once again, thank you everyone for all the help and support you have given to this very worthwhile exercise"

Report below by organiser John Thomson. Photos by Ray Dawes

"Under the leadership of Ian Bennett, coupled with the active assistance of Nicola Antoni and John Thomson, the Club broke all records this year

in arranging for some 700 Christmas shoeboxes (maybe approx 800 when all are in) to be donated by members, friends and contacts, but especially by sixteen schools around the New Forest and in Totton.  As last year,the shoeboxes have gone to the very deserving children supported by the Honeypot Childrens Charity for which a "presentation photo" appears in the accompanying photo gallery.

"The generosity and efforts of the many participating schools and everyone who donated has been truly amazing.   We estimate that the filling of the boxes comprise donations of over £6000, which in still
difficult times is a magnificent gesture in the cause of disadvantaged children throughout the UK and in the New Forest. Ian, Nicola, John and the Club extend their thanks to all concerned, including those Club
members who helped the cause, not least Alan Blair, Mike Eyers, Jim & Beryl Knight, and those who assisted with the final collections.

"The schools are too many to list in this report, but we hope press reports will publicly name them, and added to which we are ensuring that they receive appropriate feed back and thanks from Honeypot."

I understand that a number of members have the impression that Honeypot was drawing quantities of shoeboxes from other sources last year and that a large number of boxes were visible at the presentation in December.

I have followed this up and the facts are quite simple. Sellotape had planned to set up a celebrity film shoot at a Honeypot and the boxes, which were empty, were part of the promotion. At the last minute, the shoot was called off because the celebrity fell ill and the empty boxes were then returned to Sellotape and the promotion cancelled. I have had this information from two sources so I have no reason to doubt it’s accuracy and it is important that any misinformation is quickly dispelled. What a misunderstanding! I saw the boxes at the time and didn't think anything of it because they were all identical.

Honeypot do receive a few shoeboxes from other individual sources but something like no more than 20, I believe.