Club Information/ News from the Rotary Club of Wokingham

What has our Club been up to recently?

Today, our Club decided on a new tranche of donations. As a result, it is now more than £22,000 that have been given to deserving causes since July 2014.

for more details, go to this page!

The hexagon was fully packed, this Sunday, as children from the Wokingham schools came and perform under the wondeful conducting of Clive Waterman. The audience enjoyed 90 minutes of music of a surprisingly high standard!. Through the sale of programmes and bucket collections, our members were able to raise over £1,000 in profits. This money will be distributed to our supported charities.

Our Club will allow two young adults to increase their leadership skills by sending them - free of charge - to a Leadership course, during the summer. For more information click here!

8 February 2015: Providing books to the Philippines

As part of an effort involving Rotary Clubs across the country, our club has sent  1,200 Books to school libraries in the Philippines.

The two main beneficiaries this year are the Coram Live Education Centres, helping young people create healthy habits, which received £4,000 of the proceeds of our Charity Golf Day, and the Wokingham charity Building for the Future, which  received from our Club over £3400 pounds, mainly raised through the Cantley Park Firework Display, last November. Building for the Future aims to to raise the profile of disabled children in the Wokingham community, and provides specially adapted facility to disabled young people.

It has now become a tradition that our members face the weather roughness and collect money to provide assistance to some Wokingham families in need. This year saw collections taking place in front of the Town's Tesco, Morrison and Waitrose, as well as at the Station. The Rotary Club of Wokingham thanks the town citizens, who have showed their generosity by dropping more than £3,000 in our collection buckets. We also thank the shop managers and Network Rail for allowing our members to collect in front of their premises.

In collaboration with Transform Housing and Support, this allowed to provide Christmas Vouchers to 55 deserving Wokingham families.

The Rotary Club of Wokingham supported Wokingham's Live Advent Calendar, providing staff to instal, man and remove  sound systems and lights before and after the daily performances, and stewards to handle the enthusiastic crowd.

The local round of the Rotary GB&I Young Chef competition took place at the Sandhurst School. Lauren Edmunds won the competition and receive prices from our president Jon Bundock. More details here!

Under the attentive direction of Past President David Gold, our club organised a wonderful day event where keen golfers were able to enjoy their game in excellent weather conditions, on the beautiful links  of Bearwood Lakes. They were entertained during their evening meal by compaire Aaron James. £7,500 were raised for charity. More information here!

Future events open to the public.

Each Year, the Rotary Club of Wokingham finance projects to help local and international communities. 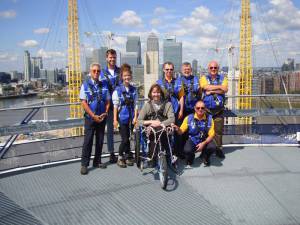 A new visit to the top of the O2 arena

Club Members return to the O2 and climb with Garry Stevens to the top of the dome.