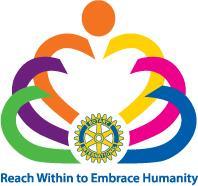 Martin Greaves, District 1100 Governor said: "If you always do what you have always done, you will always get what you always got." Whether or not that inspired Terry Williams, the out-going President (pictured left), to do something completely different but, to the surprise and delight of President, Philip Matthews, he said he would live for 7 days and nights, in winter, in a ShelterBox emergency tent, in the Market Place in Highworth to raise funds and awareness for the disaster-aid charity.

Some Rotary Presidents think they need a "year off" when they hand over to their successor, but not so Terry. Remarkably, in his "year off" Terry more-or-less single-handedly raised around £10,000 for the Club's charities. A truly impressive effort and it is no wonder that this brief summary of 2011/2012 is dominated by this most enthusiastic Rotarian who certainly did "reach within to embrace humanity", the Rotary International theme for the year.

On a damp February morning Terry and a few members erected his tent and set up camp. Members divided the days into 2-hourly slots to support him ; some even spent a night with him. Throughout the week, Terry's breakfasts, lunches and suppers were delivered by local eateries. Members of the public came by in good number, intrigued to learn what is in a ShelterBox and to see what it must be like to live in the tent. BBC local radio interviewed Terry every morning, Swindon Advertiser wrote several articles and Swindon Web.com made a video diary of his week. And the Club held its normal Monday meeting alongside him, having a 2-course supper delivered by a near-by pub. Terry's fund-raising was boosted still further by a quiz and curry supper given free by a local restaurant. The final figure raised was £8,860 which enabled the Club to fund 14 ShelterBoxes and also send £1,000 to Rotary's End Polio Now campaign. The ever enthusiastic Terry also did some other fund-raising too. He organised a music concert featuring his son, Anthony, on double bass, Rosie Burton on bassoon and Sarah Down playing piano; two produce sales; sold his own-grown Christmas Trees in December and daffodils in Spring; all of which raised more than £2,700 for other charities.

Regular events held were the Quiz organised jointly with Inner Wheel, producing £1,120 for The Filling Station; the Young Musicians Competition; the Charity Golf Day provided £1,600 for the NSPCC; and a Young Musicians Showcase raised £470 for Swindon Music Trust.

8 members and their partners attended the one-day District Conference in the Colston Hall, Bristol, the best number for some years. The David£s Collett and Peaple finished 2nd in the District Golf, the Quiz team was again defeated in the first round, but the skittles team reached the quarter finals. Members and their partners enjoyed a weekend away in Portsmouth, a post Christmas lunch and a brain teaser of a quiz, Fireside Suppers and a trip to the Watermill Theatre to see a £cast of 1,000£s played by 4 actors£ in an hilarious version of Ben Hur. Finally, President Philip Matthews£ year of office ended on a double high, firstly with the news that Highworth Town Council had made Rotarian Terry Williams its "Citizen of the Year" and secondly with District Governor Martin presenting Terry with Rotary's top honour, a Paul Harris Award, on behalf of the Club.  A most worthy and deserving recipient.