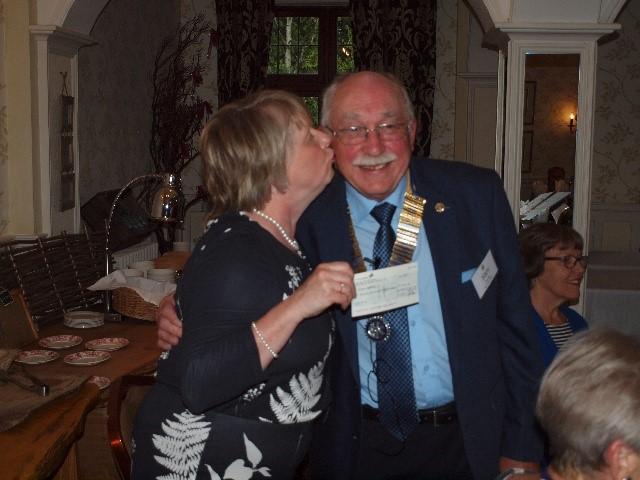 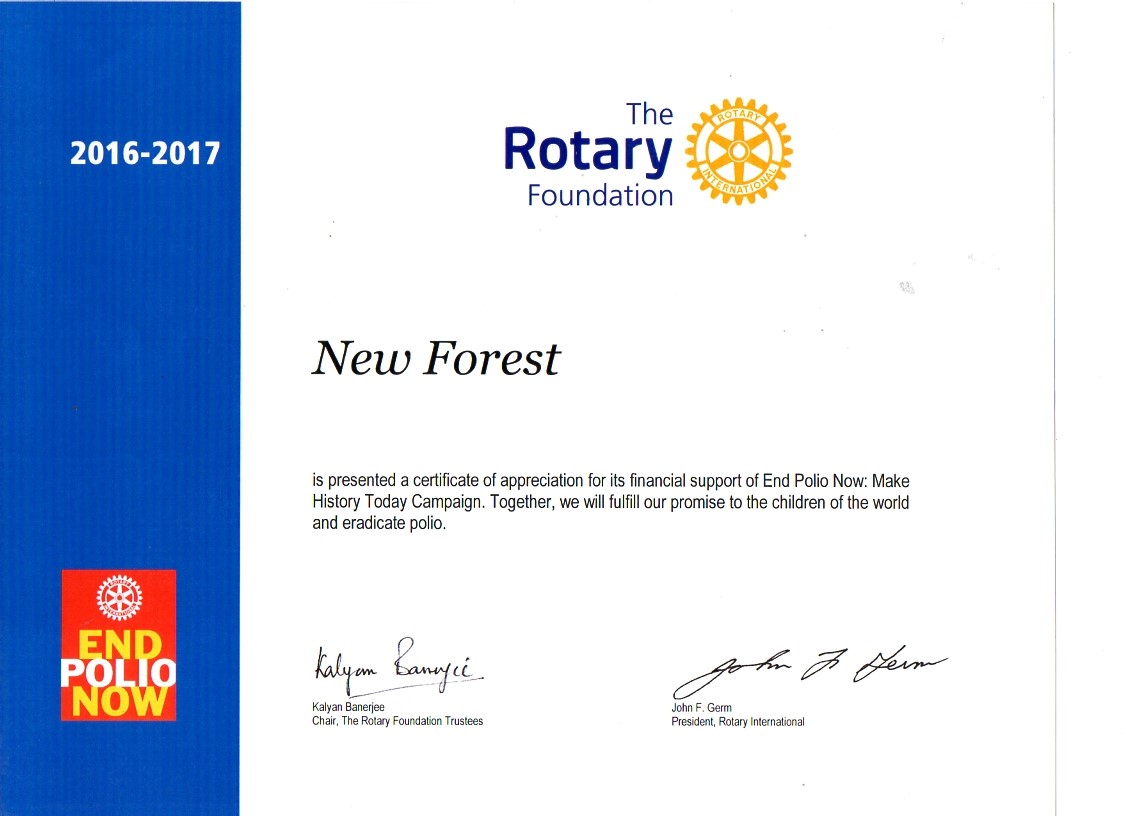 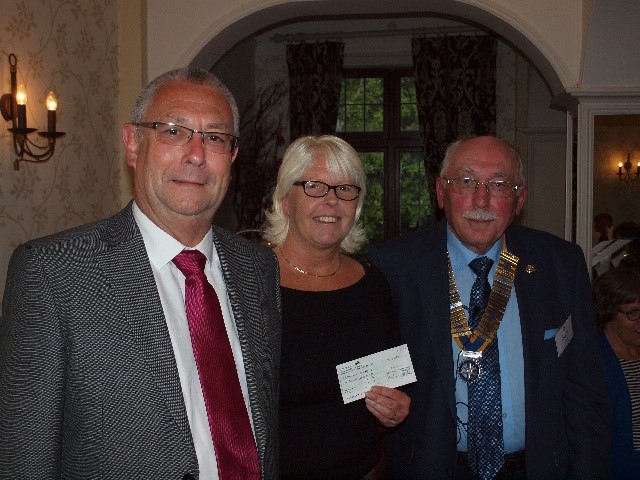 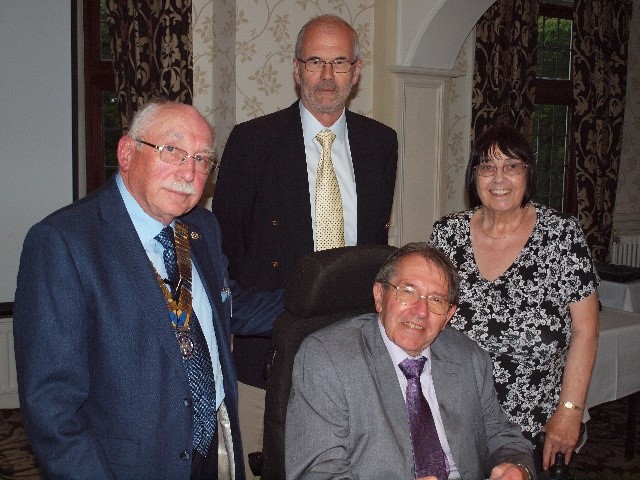 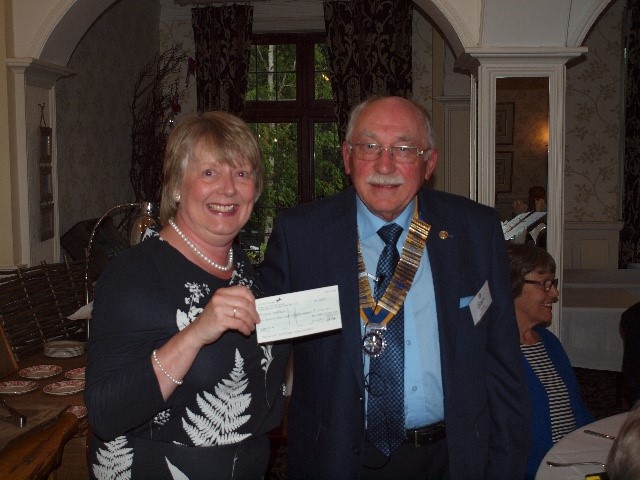 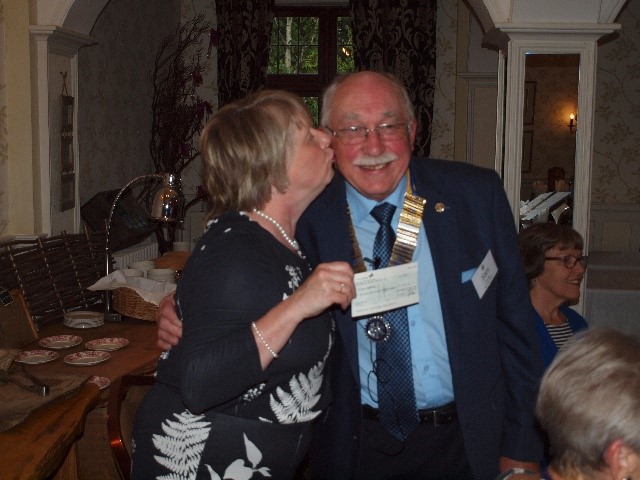 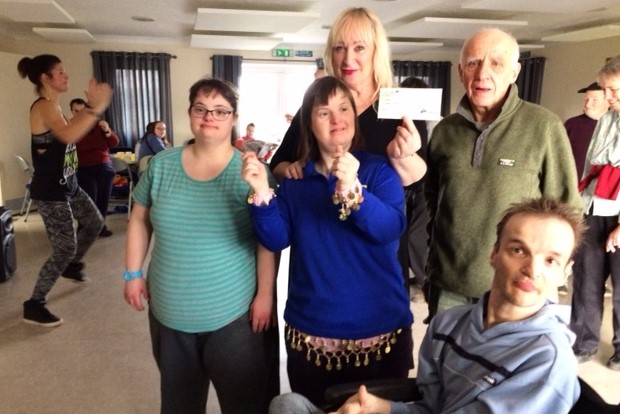 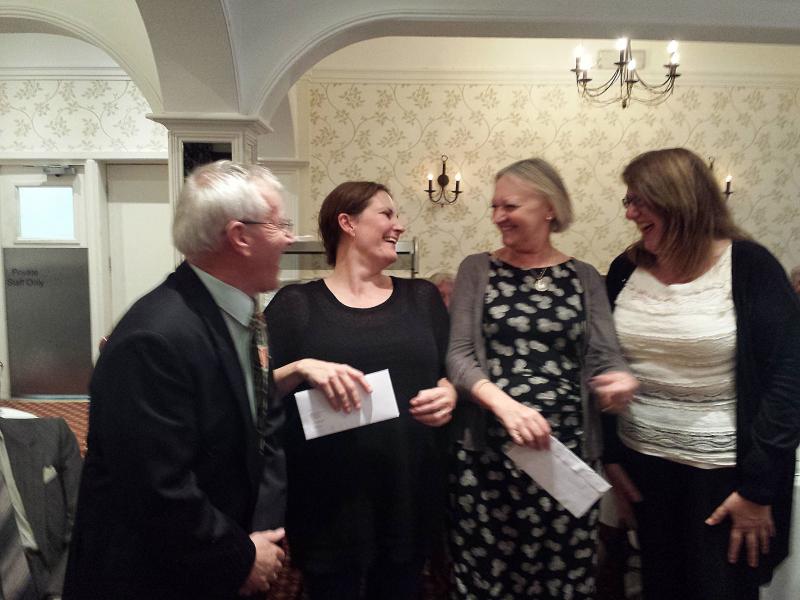 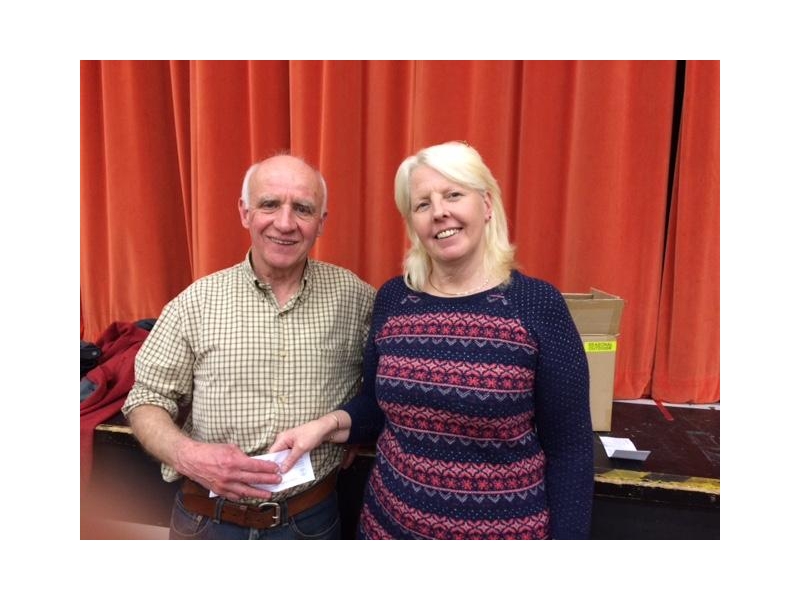 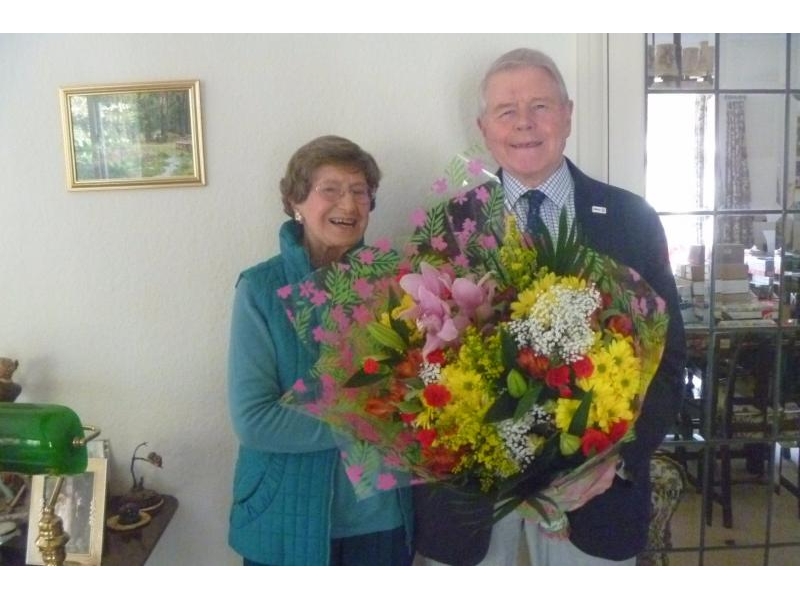 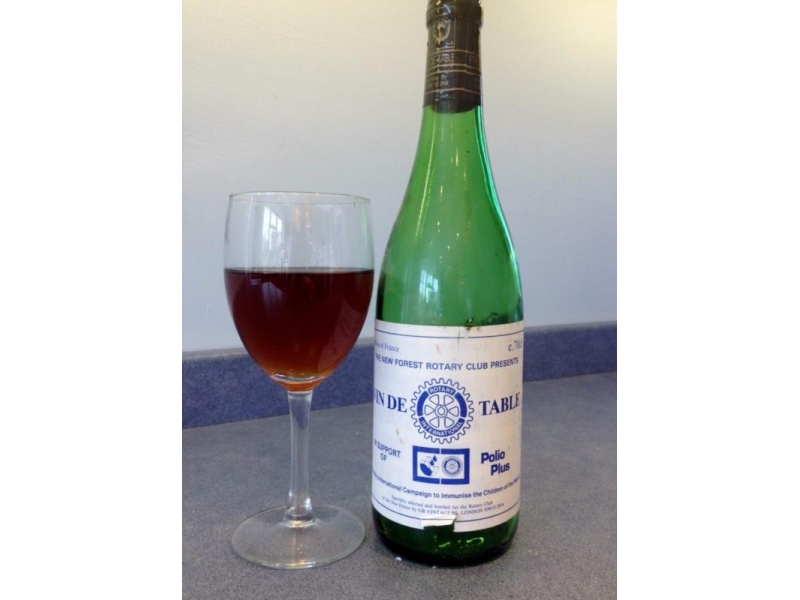 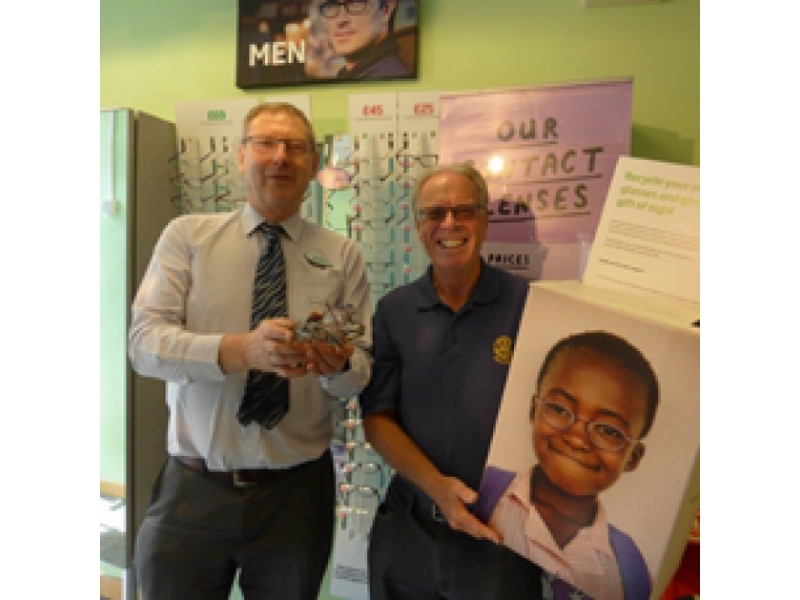 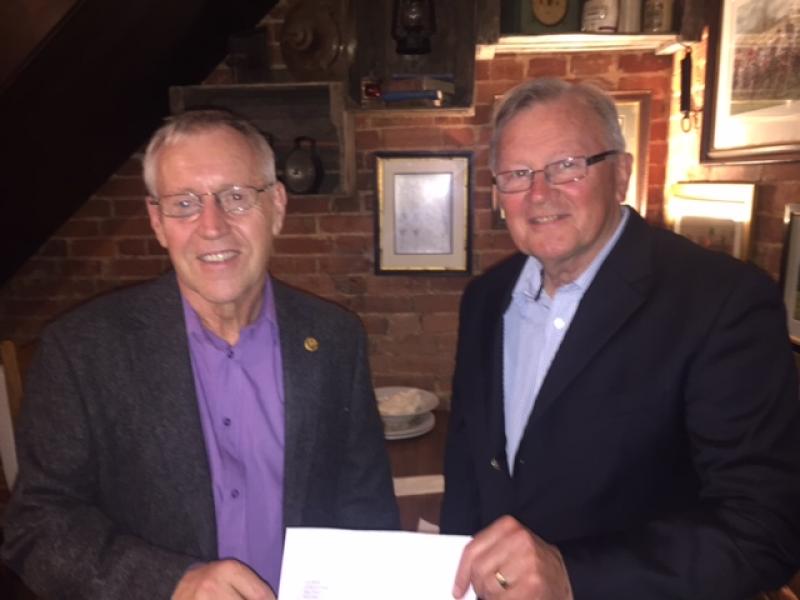 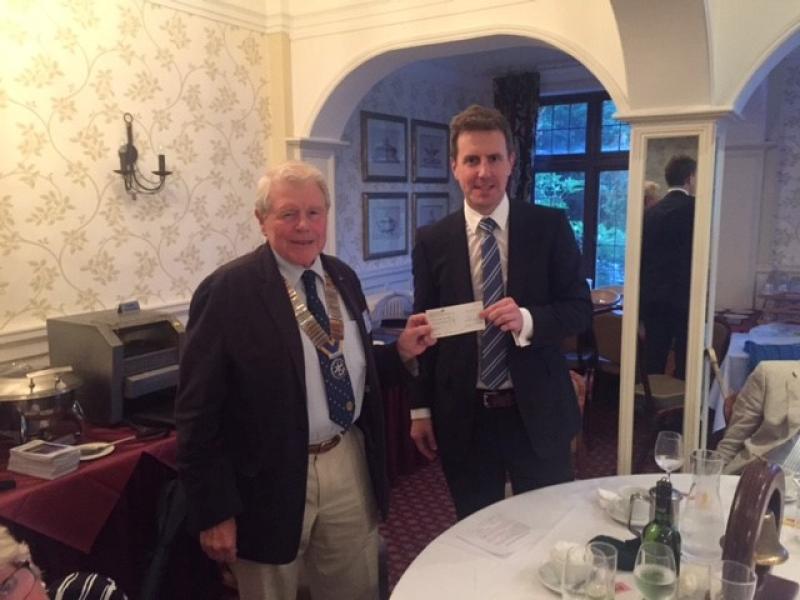 WE FUND RAISE AND HOLD EVENTS TO BENEFIT LOCAL AND INTERNATIONAL CAUSES. Funds of around £20,000 are raised each year. Members get great pleasure from distributing items and making donations in both efforts and in funds.  Most of the causes are shown in the other pages of this site and in the ‘photo galleries’ accessed from the front page. This page shows a few of the presentations and other items not shown elsewhere on this site.

When the photo is not self-explanatory there is a fuller explanation below.

Presentation by DG Allan Smith to New Forest Rotary.  On 16 July 2018 at a special meeting at The Crown the District Governor made his presentation on 'Inspiring Success' to members.  He also presented a certificate of appreciation  from Rotary Foundation for its financial support of 'End Polio Now:Make History Today Campaign'.  The certificate stated that 'together we will fulfil our promise to the children of the world and eradicate polio'.

Year ending 31 June 2017 President Philip's Charities were Testwood Lakes Sailability, Brockenhurst Gateway Club and Wessex Heartbeat. On 5 June Philip was ill and in hospital but madee sure that his charities received their financial support as planned. A/President Sam made the presentations at a special Family and Friends Dinner at The Crown Hotel. Photos above. Details of the Charities are shown HERE.

VISION AID OVERSEAS. New Forest Rotary Club has collected numerous unwanted spectacles to help people in developing countries, where children can’t thrive in education or adults get work if they can’t see properly. The specs go to Vision Aid Overseas, a charity which has Vision Centres in Sierra Leone, Gambia, Ghana, Ethiopia and elsewhere. The Centres are locally based,  provide eye tests, specs, and specialist eye care. The aim is to make them self sufficient , by providing the right resources including training and optical equipment.

This collection was part of Rotary’s international effort and is a simple but effective way of helping.

A large box packed with specs was presented by Rotarian Mike Clarke to Emma, an optical assistant, at Kelly Eyecare of Brockenhurst , who very kindly act as a collection centre for forwarding specs to Vision Aid.
Picture above (September 2016).

I found this bottle in our wine store. It is the last bottle of white wine bottled and sold in support of Polio Plus that Alan Blair had arranged with Ed Phillipse, a wine merchant from our twin Rotterdam Bernisse Club.

Ed had arranged bottling and shipping from Holland in 1988. It sold for £2.75 bottle and was very popular.
As you can see after 28 years it is no surprise that it has not kept well. It is not quite vinegar, but is a timely reminder of how long Rotary has been involved in fundraising to eradicate Polio throughout the world. What started as a project hopefully to be completed by Rotary's centenary in 2005 that continues to this day, 11 years later.
It is a measure of Rotary Internationals commitment to the World Health Authority to see the job completed, thankfully with the considerable help of the Bill Gates Foundation.
We are nearly there, let's hope it is completed soon, and Rotary will have achieved an historic success that will eliminate Polio worldwide.
Ken


On 2 October 2015 we presented cheques, arising from our Horse or Cycle Event to Honeypot and Gift of Sight.

From left to right Rotarian Dave Smith, Horse or Cycle organiser. Emmas Larter of 'Honeypot' and Ailksa Walter and Jackie Davies of 'Gift of Sight'

WE COLLECTED OVER 500 PAIRS OF GOOD USED SPECTACLES FOR VISION AID.

“Over 500 pairs of good, used, spectacles have been collected by New Forest Rotary Club as part of its international aid effort.

These go to Vision Aid Overseas, a major charity, which works in the third world helping people, of all ages, with eyesight problems.

Rotarians and their friends have been glad to scour their drawers for such a worthwhile cause, and gather we some maybe sold off, as there’s apparently a market for retro spectacle frames, some of which will definitely qualify!

The picture shows Rotarian Mike Clarke presenting some to David Macro, Retail Director of Specsavers, Lymington, which have been a very encouraging and helpful collection point for forwarding the specs to Vision Aid.

A large number of specs cases were also collected and these are going to be recycled in aid of the Hope Charity.

Special thanks to everyone who helped with this and especially John & Kate Crocombe and Clive Rutland who made a truly sterling effort. “ Mike Clarke 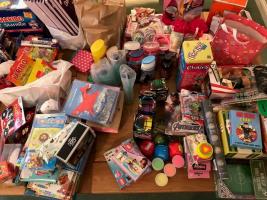 Donation and Gifts to Honeypot House for Christmas. 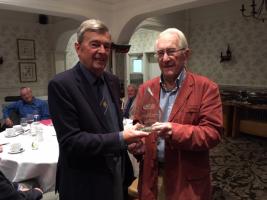 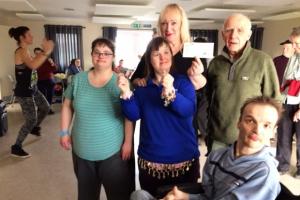 DONATION TO THE FRIENDSHIP CLUB, HORDLE

more We have made a donation of £200 to a fairly new initiative called the Friendship Club in Hordle. This provides activities for adults with learning disabilities in the daytime each Wednesday. Ken Garrod presented the cheque on 25 Jan 2017.