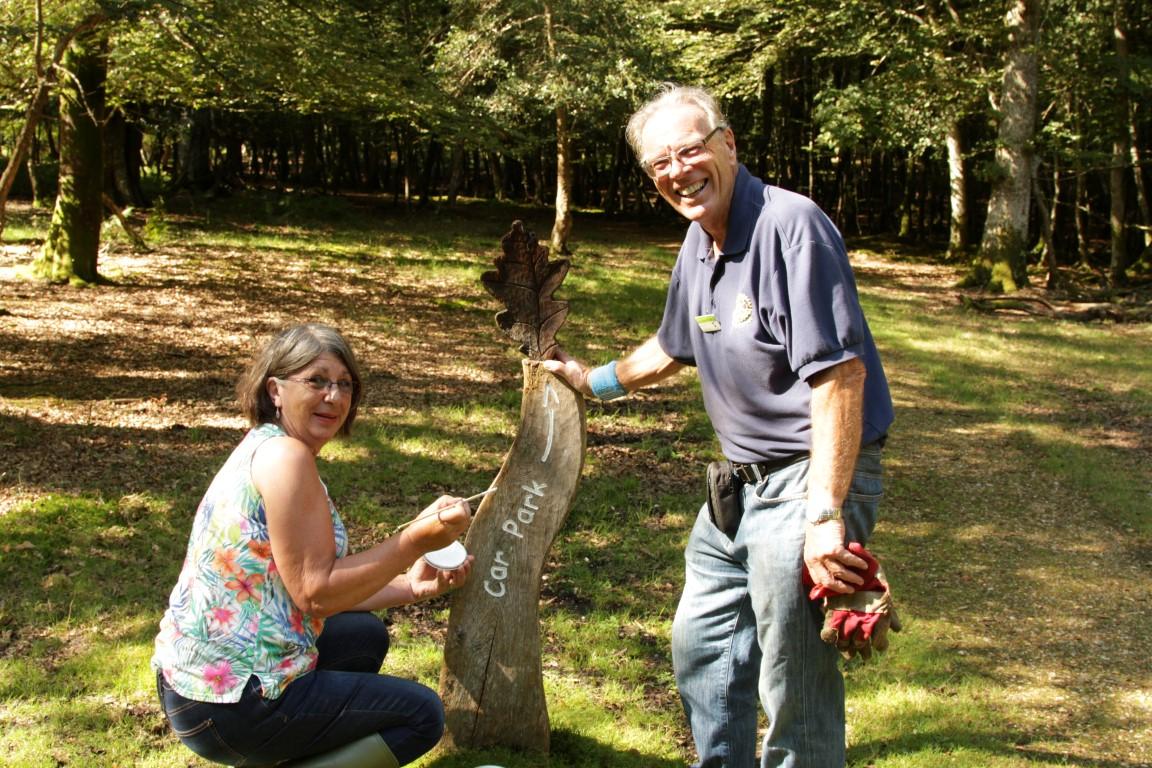 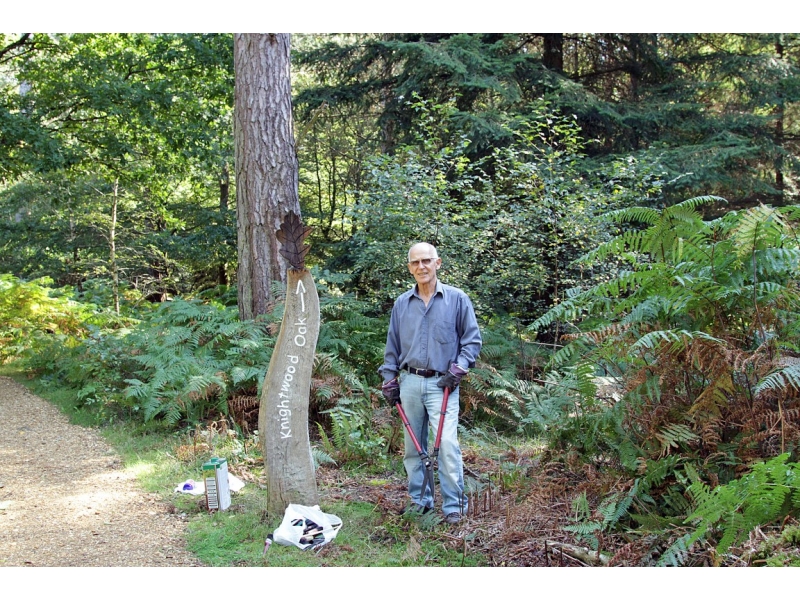 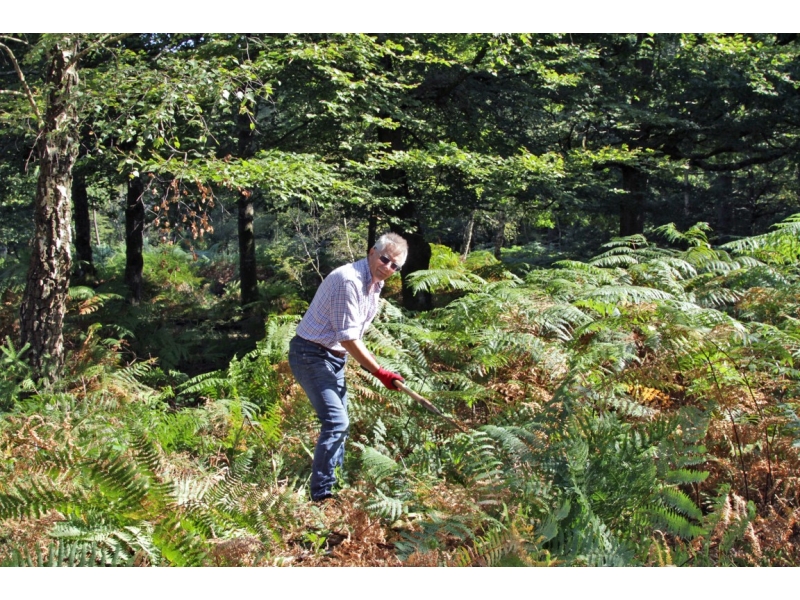 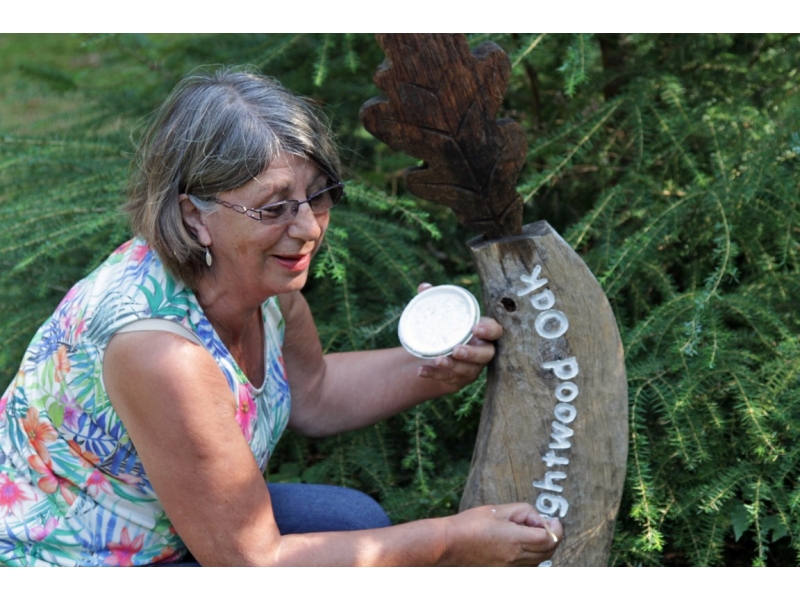 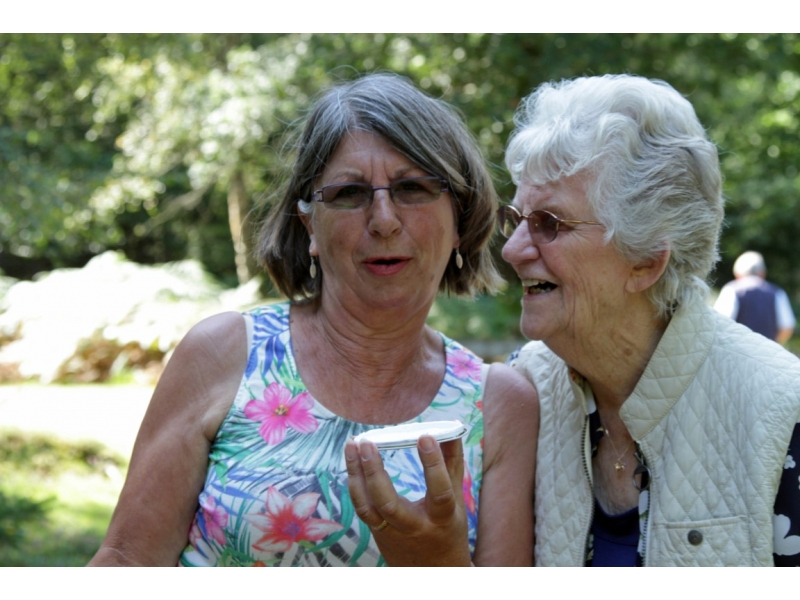 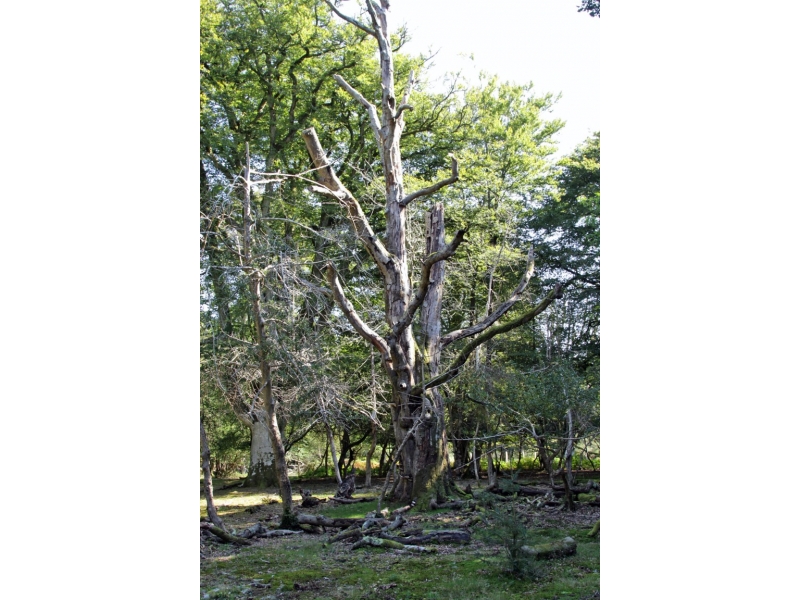 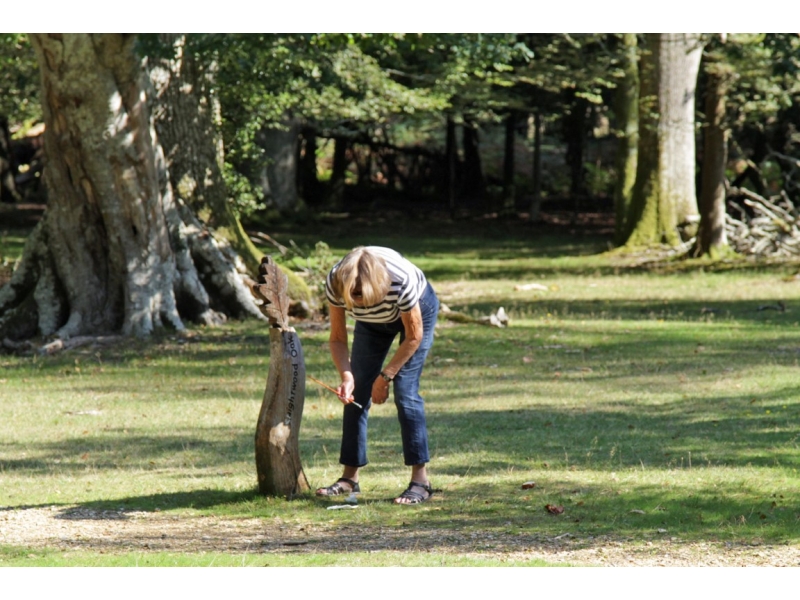 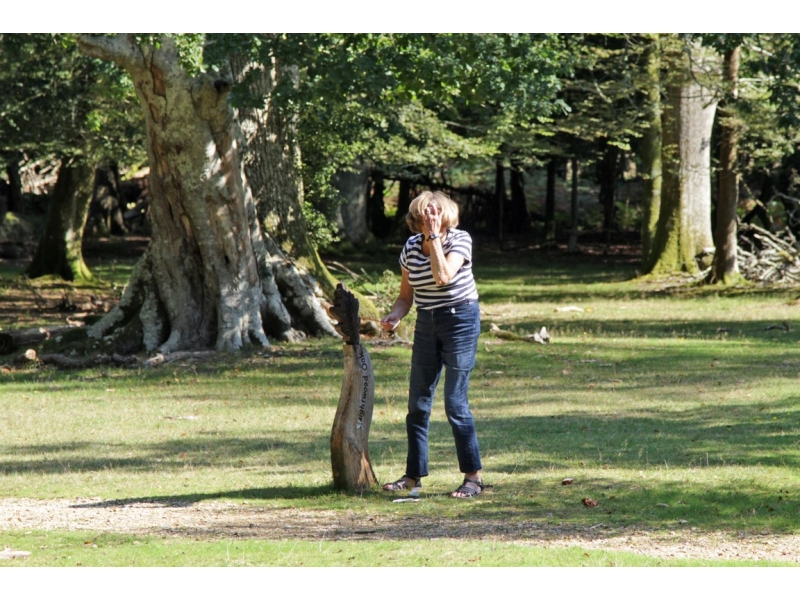 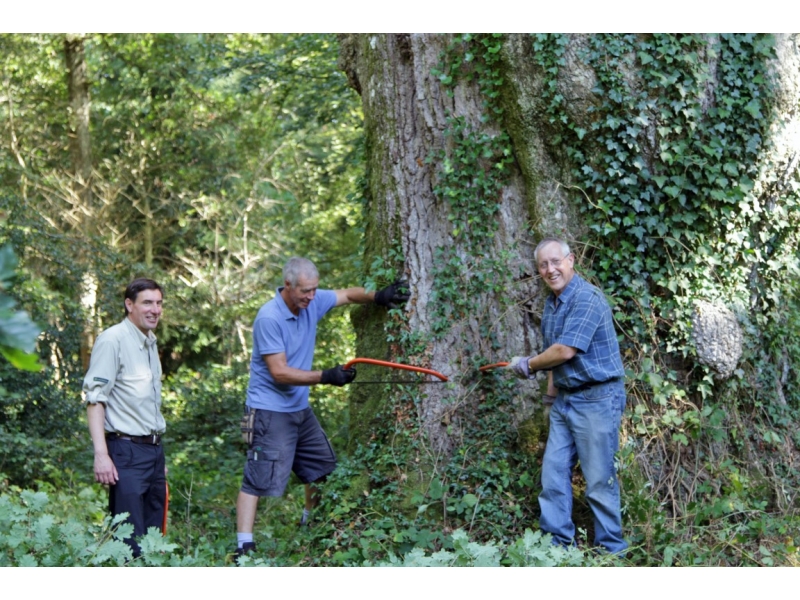 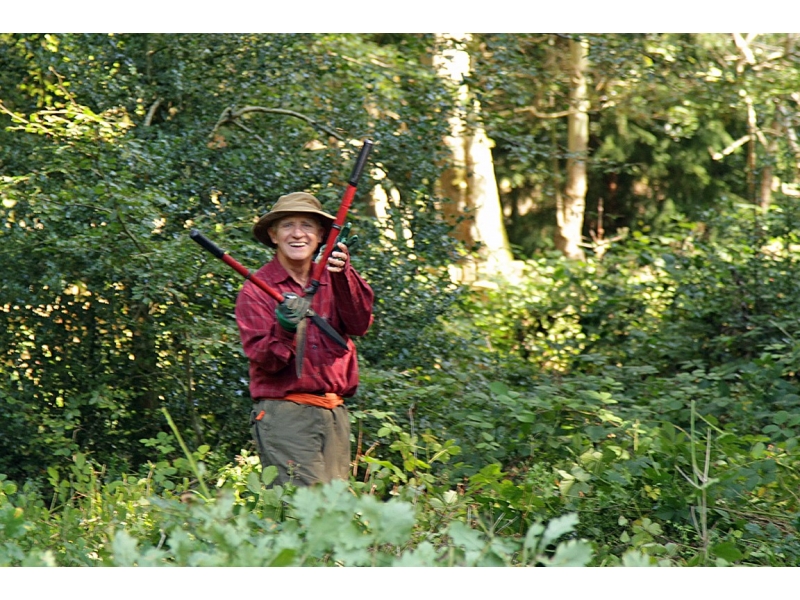 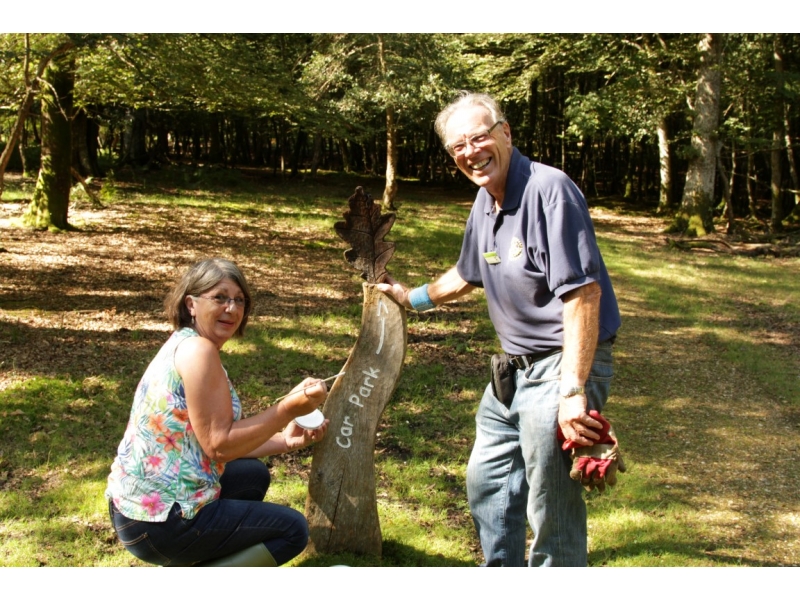 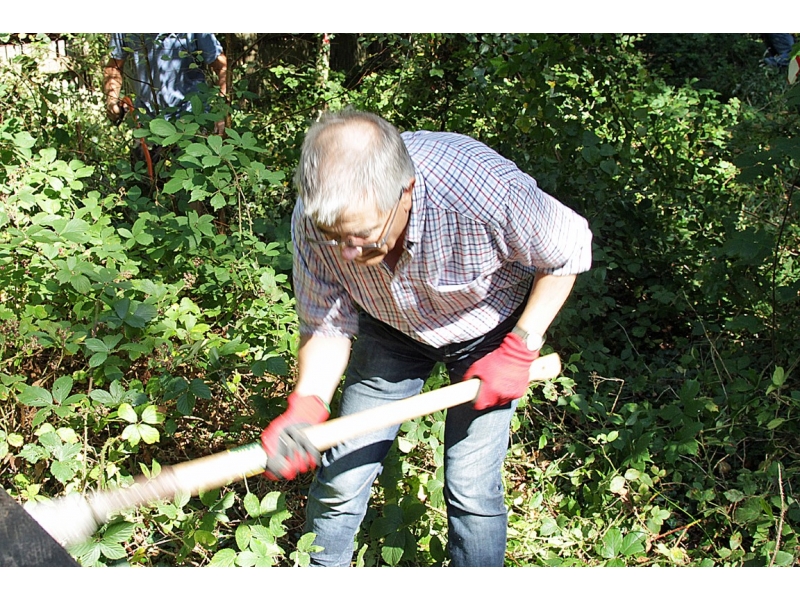 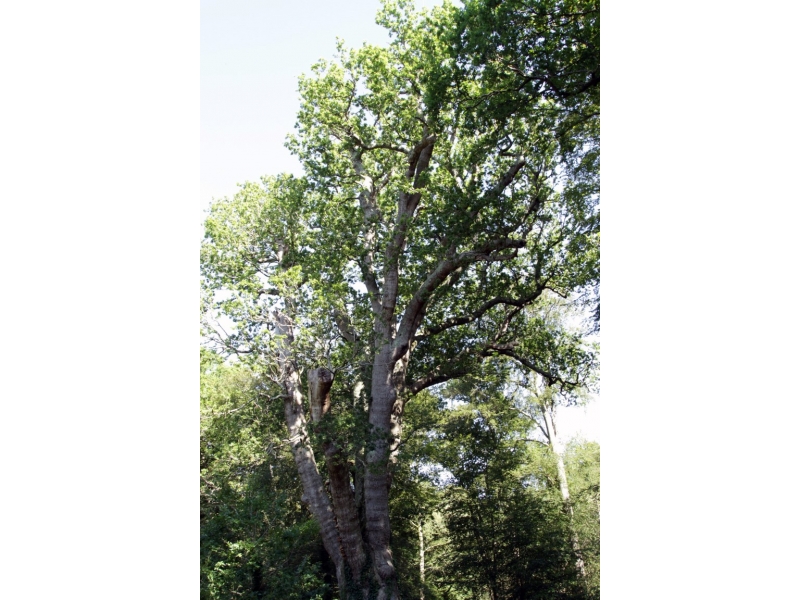 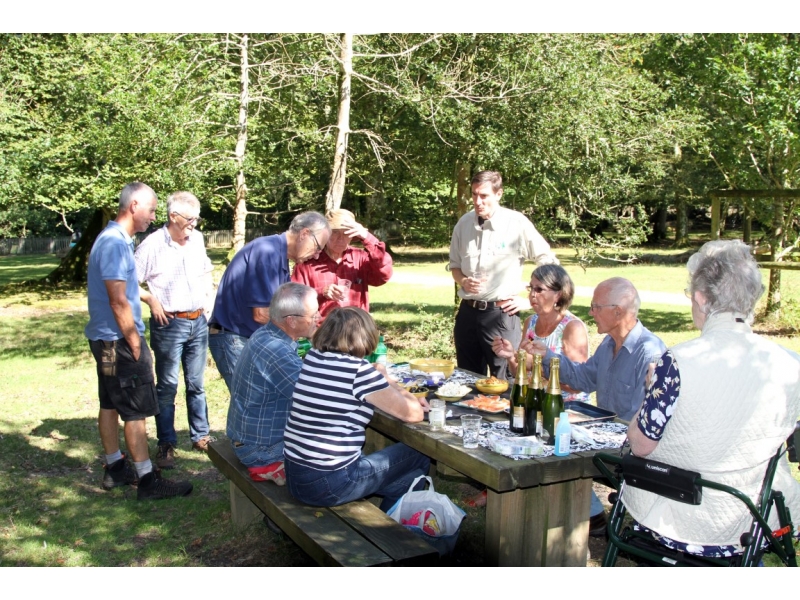 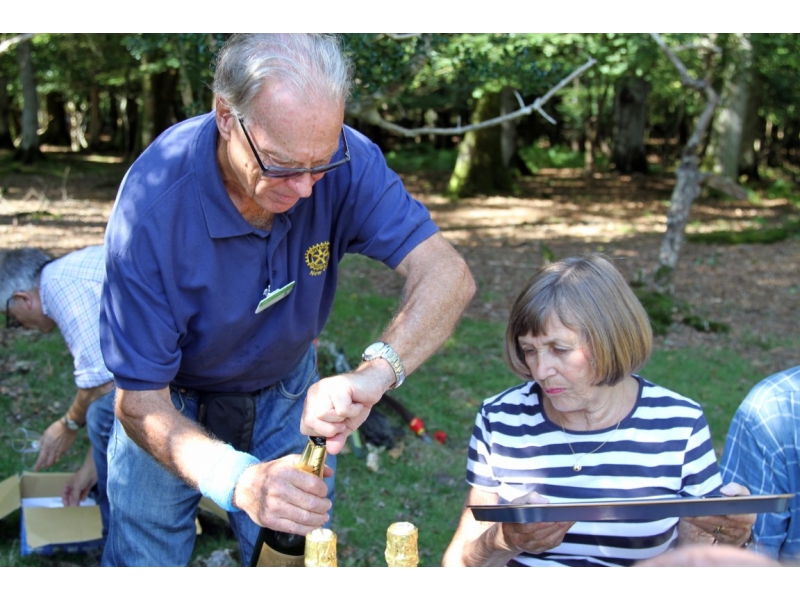 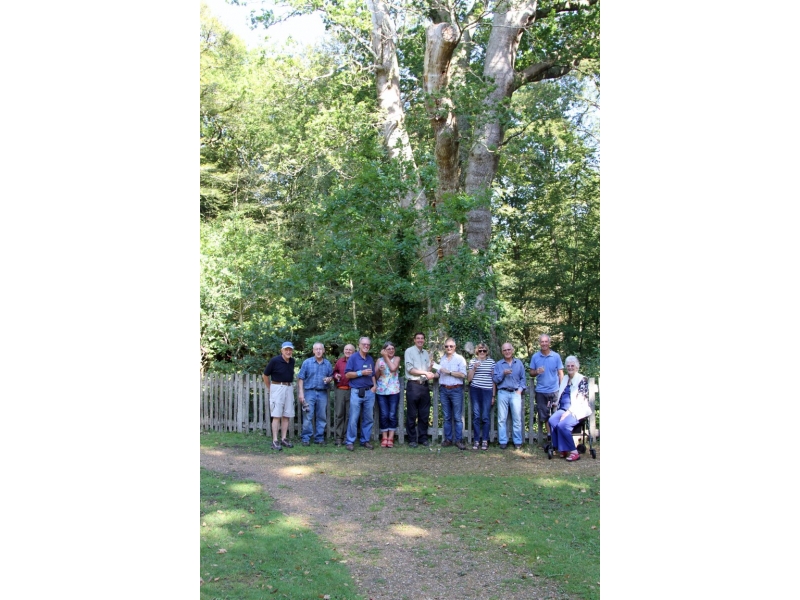 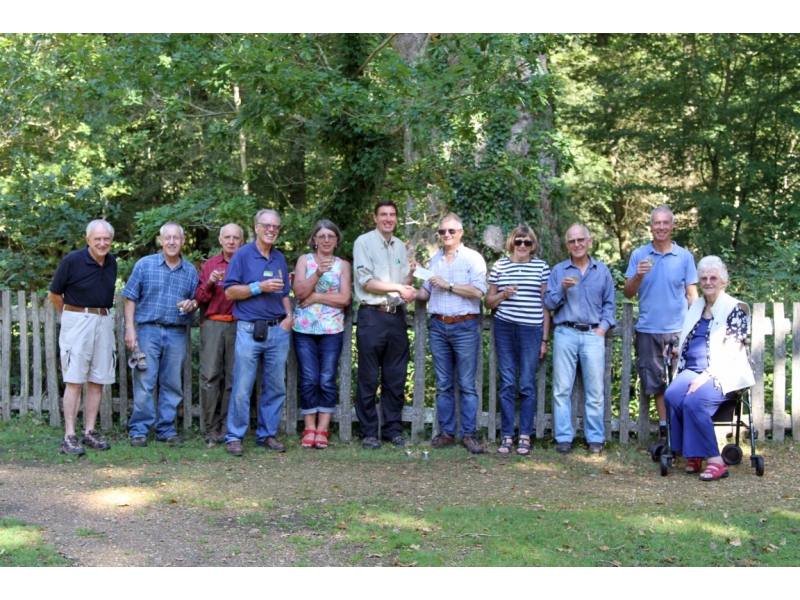 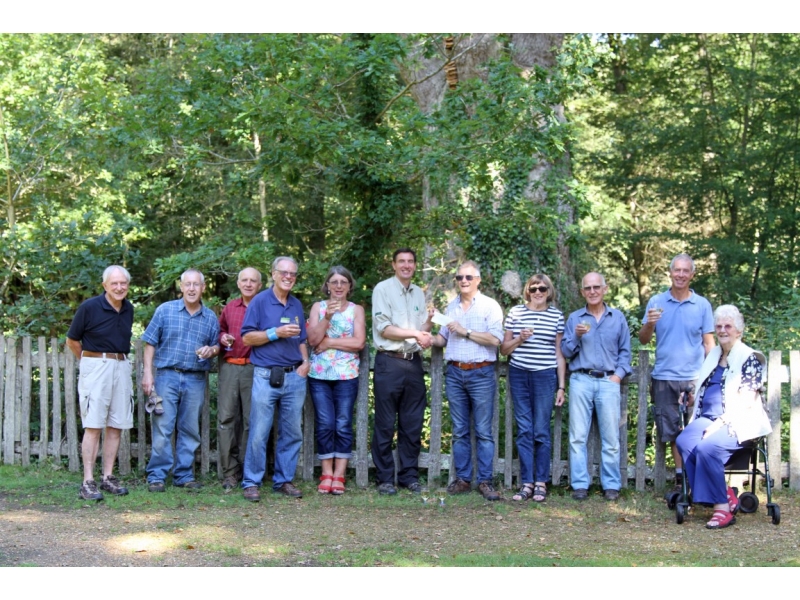 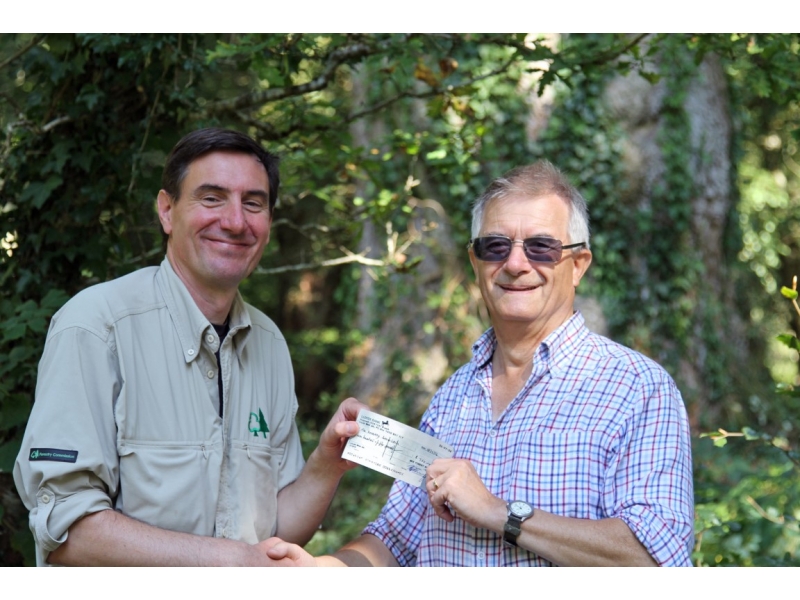 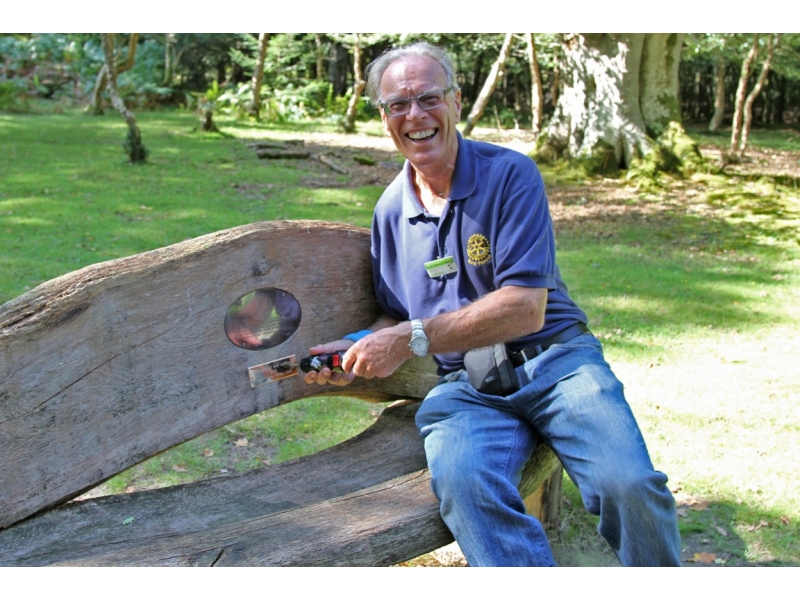 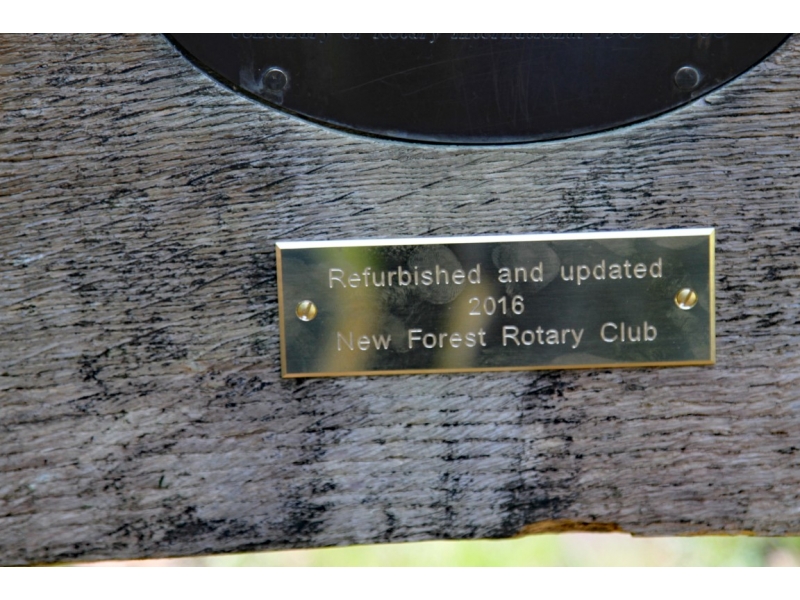 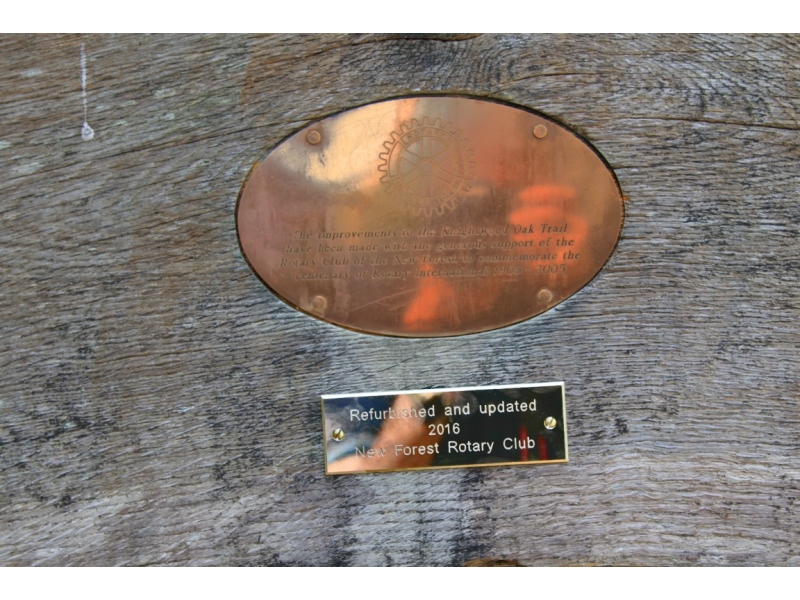 Henry VIII was here.... at the historic Knightwood  Oak, on Bolderwood Ornamental Drive, in the New Forest,  AND so was New Forest Rotary Club, in September 2016!

Henry reputedly visited when it was already 100 years old and quite a sight to see, even then. Over time this massive, 600 year old, ancient oak, was literally getting lost in the woods. So, New Forest Rotary took on a joint project with the Forestry Commission, in 2005, to make it more accessible to the public. This involved opening up the site, improving the car park, putting in new paths with ‘dancing oak leaf’ marker  posts carved by Nicola Henshaw, interpretation boards, benches, picnic tables and a traditional cleft oak fence around the oak itself. All this to celebrate the centenary of Rotary International.

Eleven years of weathering, wear and tear later, the Club has returned with another joint Forestry Commission Project to restore the site, now one of the Forest’s top heritage visitor attractions. A Rotary team  was on site on September 14thhard at work clearing dense undergrowth , self seeded birch, pine and bracken, obscuring views of the tree, repainting marker post direction signs, improving footpath access from the revamped  car park and generally sprucing up the area.  However, a number of trees were left alone. These were saplings, grown from the Knightwood Oak’s own acorns, so it now has a family and successors in decades to come.

The project day entailed a lot of hot, hard, physical work and some of the men were seen to be unbuttoning their shirts to reveal rippling muscles, thus providing real competition for a certain Mr Ross Poldark!

A cheque for £750 was presented by Philip  Dinn, President of New Forest Rotary Club, to Richard Daponte, Forestry Commission Ranger and Project Leader, towards the total cost of the project including the installation of new, updated, interpretation boards.

The overall project was a good example of the community engagement the Forestry Commission encourages and the Rotary motto of “service above self”, meaning that Rotarians are willing to physically work on their projects not just make donations, important though they are.

Congratulatiions to the hard working but fantastically cheerful Rotarians who turned out for this who where: Philip Dinn, Dave Smith, Ken Garrod, Richard Blaylock,George Stephens, Malcolm Woolley, Mike Clarke, Ray Dawes (to take the pictures), Carole Blaylock, Sue Clarke and John Thomson who arrived in time to help us drink a toast to the tree with a glass of bubbly!

The Knightwood Oak is a fine New Forest site to visit – why not drop in when you’re walking, cycling or driving by, to take a look or have a picnic?MIKE CLARKE

Our Knightwood Oak Project work day, on site, will be Wednesday 14th September at 10 a.m.
(Update by Mike Clarke 6 July 2016. Previous updates below)
"This heritage, educational, project is to update/refresh the original project we did in 2005, much weathered but well used, to commemorate 100 years of Rotary International.
Volunteers are needed, for light work, by way of clearing the cleft oak enclosure around the Oak, painting the leaves/lettering on the ‘dancing oak’ footpath direction signs, tidying up the path from the car park etc.
New interpretation boards will be installed by the Oak  and an additional Rotary, sign recording this project, adding to the existing one on our rustic bench.
Forestry Commission staff will be present to guide/assist us and some preparatory work will have been done.
A cheque will be presented to the Forestry Commission on the day, so our contribution will be both financial and by way of ‘service above self’’.
We hope to make something of this in PR terms, as we’ve successfully done previously.
The plan is to have a celebratory picnic so we can all drink to the Oak!
More details and a volunteer list to be circulated shortly. Contact – Rtn. Mike Clarke."

* updating/refreshing the site 11 years after our last project -  Commemorating 100 years of Rotary International;
* making a financial contribution to cost of the new interpretation boards -  which will carry our Rotary logo and  ‘Supported by the Rotary Club of the New Forest’, as before;
* doing a day’s ‘project work’ (we call it ‘service’) on Wednesday 14th September to clear undergrowth in enclosure around the tree and along the car park access path, paint the leaves/lettering on the dancing oak leave way marker posts etc.,
* having a celebratory picnic/BBQ on the same day and make presentation of a cheque to the Forestry Commission  (I hope Bruce Rothnie, as Deputy Surveyor now, can be present to receive it – he was there for the original project);
* jointly use it to get some good publicity.... should make for some great pictures!
I believe  a) Gary North may be able to help with power cleaning/trimming the Rotary bench and applying weed killer to paths etc., b) we still need to think about how we deal with the Rotary bench plaque, adding a few words to the effect “Further improvements supported in 2016” or something along those lines.
The cheque our president will be presenting will be for £750.
I imagine the design brief is already in hand and that the interpretation boards can already be in place for our ‘project work day’ in September.
We can check the details nearer the time and think about who to invite e.g. Nicola Henshaw, the wood carver.

ORIGINAL KNIGHTWOOD OAK PROJECT 2004
We were rightly proud of the original project which was visited by the Rotary GB&I President and our Local MP among others. SEE SOME PHOTOS OF THAT DAY AND A PRESS REPORT; CLICK  HERE