Cycling's Grand Old Man Makes it to the Palace

When Harry Hill meets the Queen tonight, surrounded by a nation's greatest athletes all gathered for a unique reception at Buckingham Palace, perhaps this grand old man may reflect that this is the Olympic homecoming he should have savoured nearly 70 years ago.

Champagne? The Royal seal of approval? Backslaps from fellow Olympians? When Harry arrived back home from the Berlin Olympics in 1936, nobody took a blind bit of notice. All he had waiting for him at Victoria Station was a 200-mile ride back up north, forced to pedal the same bicycle on which he had won a bronze medal in the team pursuit a few days earlier.

"The problem was I'd spent almost all my money on buying an Olympic souvenir jersey with the five rings on it while I was over there and I hadn't got enough left to buy any food. All I had in my pocket were my two medals - the bronze and the competitors' medal everyone was given," recalls Harry.

"As I cycled home, I was getting tired and hungry and not feeling good so, about 30 miles from my home in Sheffield, I decided I couldn't go on and I needed to hitch a lift.

"Fortunately, a lorry driver stopped and, to make him realise how desperate I was to get home, I told him I'd won an Olympic medal. He said 'Well done, mate. Chuck your bike in the back, jump in and I'll take you home'. He did, too, right to my doorstep."

Tonight, 69 years on, it really is time to make a fuss of him. For when the British Olympic Association started sleuthing, trying to track down our surviving 300 to 400 medallists to invite to tonight's reception as part of their centenary celebrations, they concluded Harry, now 88 and these days living in Radcliffe, near Manchester, must be Britain's oldest living male medallist.

The BOA can't be completely sure, though. They thought Harry was the oldest medallist, period, until the unexpected discovery, the other week, that swimmer Sarah Hunt, née Stewart, part of the 4 x 100m freestyle relay silver medal-winning quartet from the 1928 Amsterdam Games, was still going strong in Scotland at 93.

As for Harry, he seems as sprightly as he is indestructible. He has outlived his Olympic jacket which, when he dug it out for tonight's celebration, had been devoured by moths. The official 1936 motif had to be rescued and sewn on to a new blazer.

He tells me that he has never smoked, that he has been a lifelong teetotaller and that his only drug has been cycling. Up until last year, his proud boast was that he'd ridden every day of his life since being given a bike as a 13-year-old. "I've done over a million kilometres," he insists.

Sadly last year, though, he was forced to give up the sport when he fell during a ride in Spain and fractured his hip. He sounds as frustrated as hell that he is having to walk around with a stick and that the NHS are not sorting out his ailments quickly enough. He is limited to cycling on a boring exercise bike but swears he will be back on the real thing soon enough.

You wouldn't put it past Harry when he tells you of an extraordinary life in the saddle. He was a 20-year-old motor mechanic who had already built a reputation as a masterful time triallist when the BOA invited him to join the pursuit team in Berlin. The plan was for him to take the train from Sheffield and join his colleagues in London but Harry couldn't afford it.

"I had no father - he'd died in east Africa from disease during the First World War - and there was just me, my mother and brother," he says. "We didn't have much money, so I decided I'd have to cycle down on the bike I was going to use in Berlin, which was tiring and not the best preparation."

Once in the capital, he teamed up for the first time with the three local cyclists he was going to partner in Berlin. "We had one practice together at Herne Hill and that was it before the Olympics," says Harry. "Only they did give us some better wheels to use on our bikes for the actual event."

Having reached Berlin by cycle, boat and train, Harry reckoned the Nazis' great global propaganda exercise and Jesse Owens's heroics tended to pass the cycling competitors by because the velodrome was situated away from all the hullabaloo at the main stadium.

"Though we heard about him, we didn't see Hitler - but he did put on a show with these Games," ponders Harry. Anyway, then, British cyclists were rather more concerned with the brilliance of their lavishly backed French cycling rivals than with global politics.

For Harry, Berlin was just the springboard for a life of adventures. A year later, a cycling magazine raised sponsorship for him to attack the world one-hour record in Milan and he became the first man to break 25 miles on an outdoor track. Unbelievably, at the age of 80 and given the chance to ride one of those new lightweight superbikes at Manchester Velodrome, he came within a mile and a half of equalling the mark he had set almost 60 years earlier.

In his heyday, Harry was invincible in time trials and he lost his best competitive racing days to the War, during which he built submarines in Barrow. Yet, afterwards, he kept finding new cycling challenges in between running a garage business in Manchester and starting a family. At 60, this dad of five even became a bit of a celebrity across the pond by cycling from coast to coast in North America across four time zones.

"When I look back on my life, I can see the most wonderful things," says Harry. "All the countries I've seen, the people I've met . . . now even the Queen in London. Mind, I won't be cycling down there this time."

The tinge of regret in his voice suggests there really was a time when we might have found this irrepressible figure chaining his bike to the Buck House railings tonight. 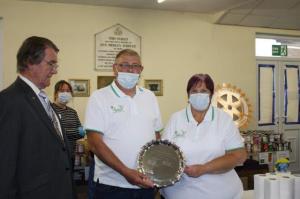