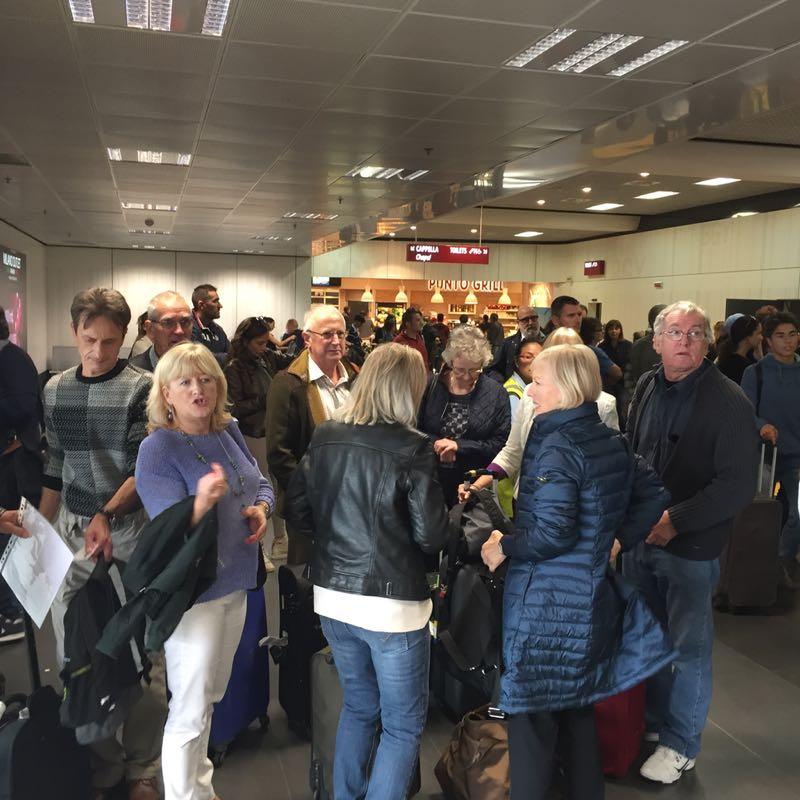 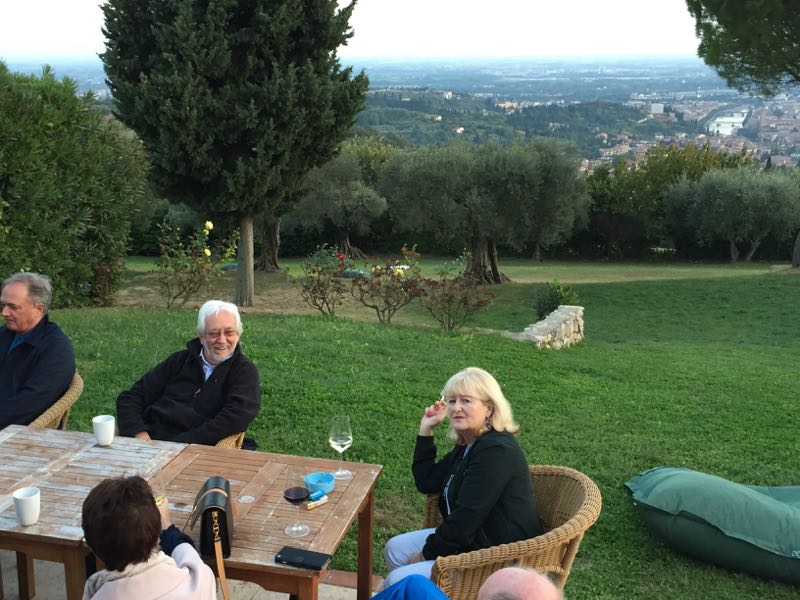 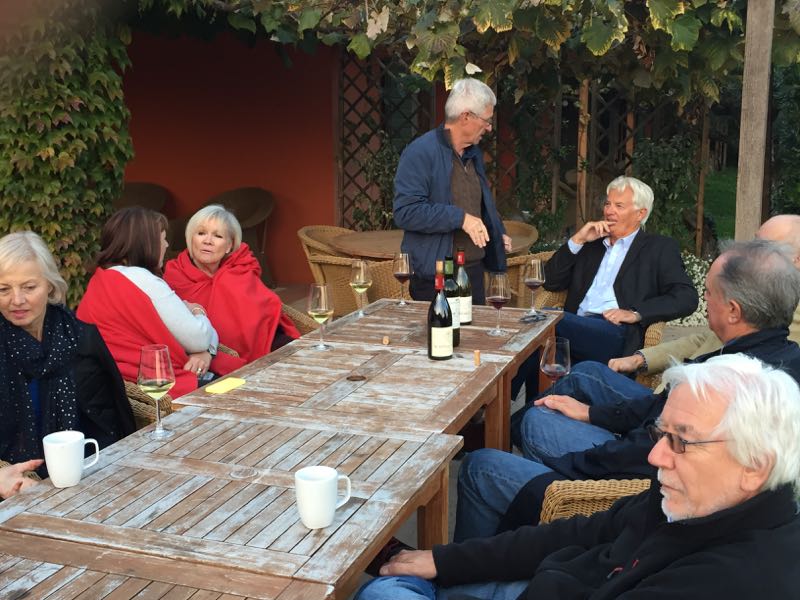 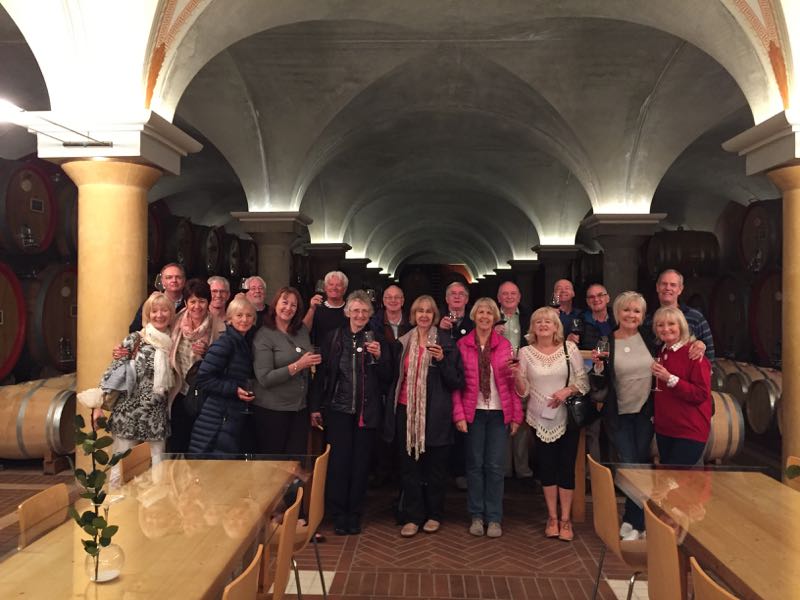 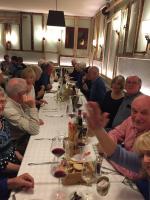 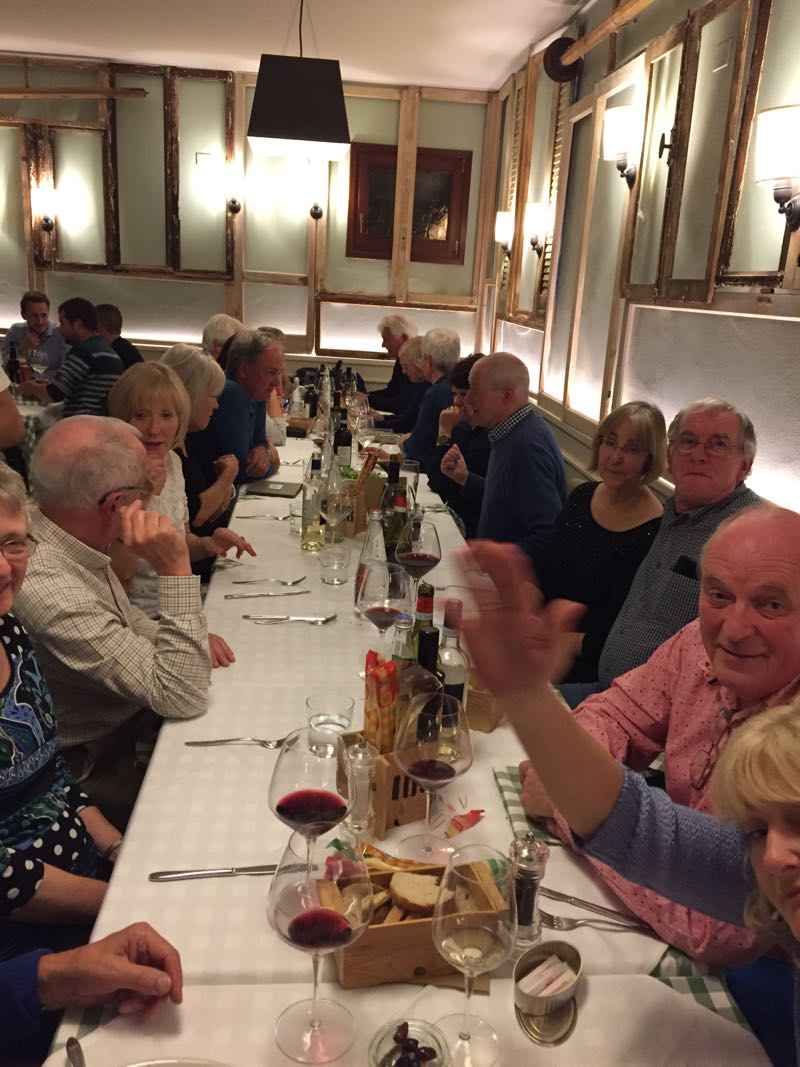 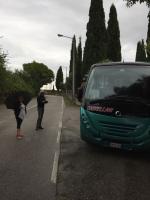 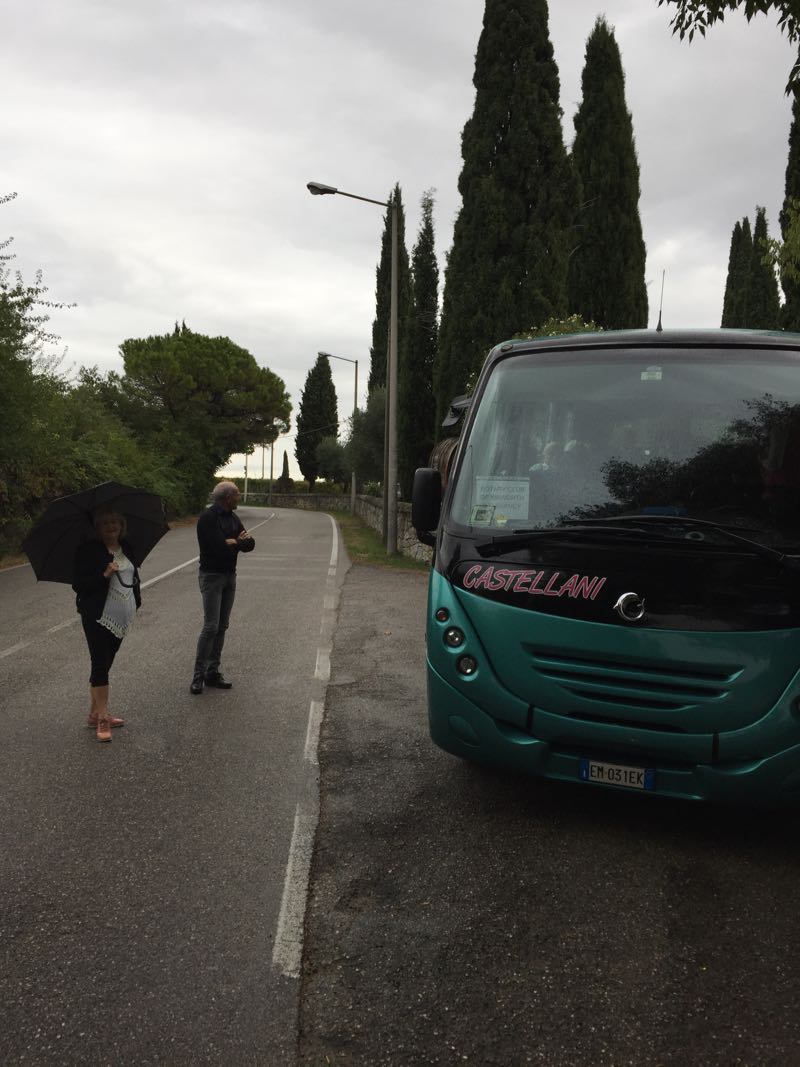 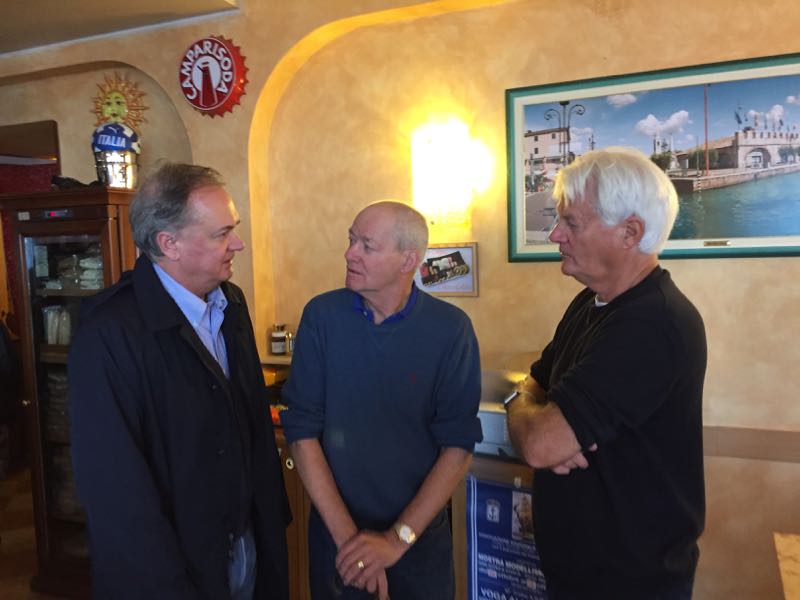 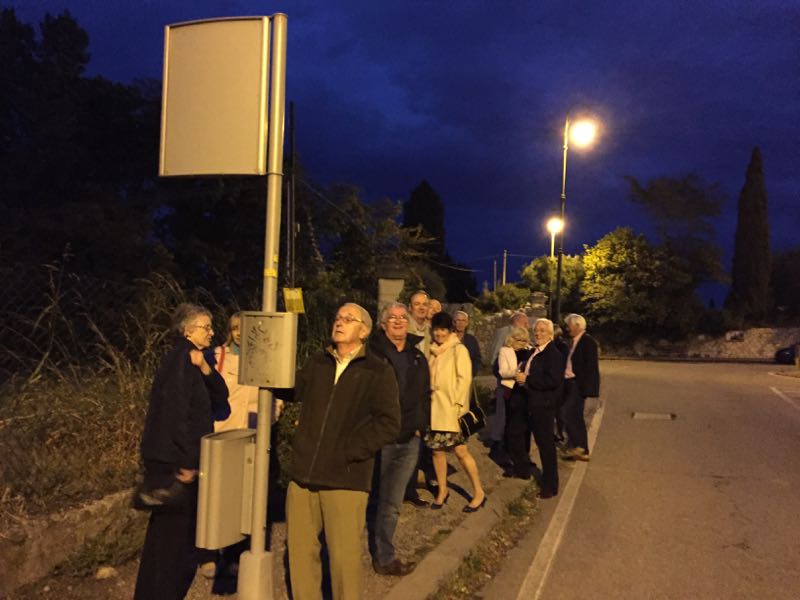 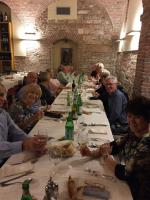 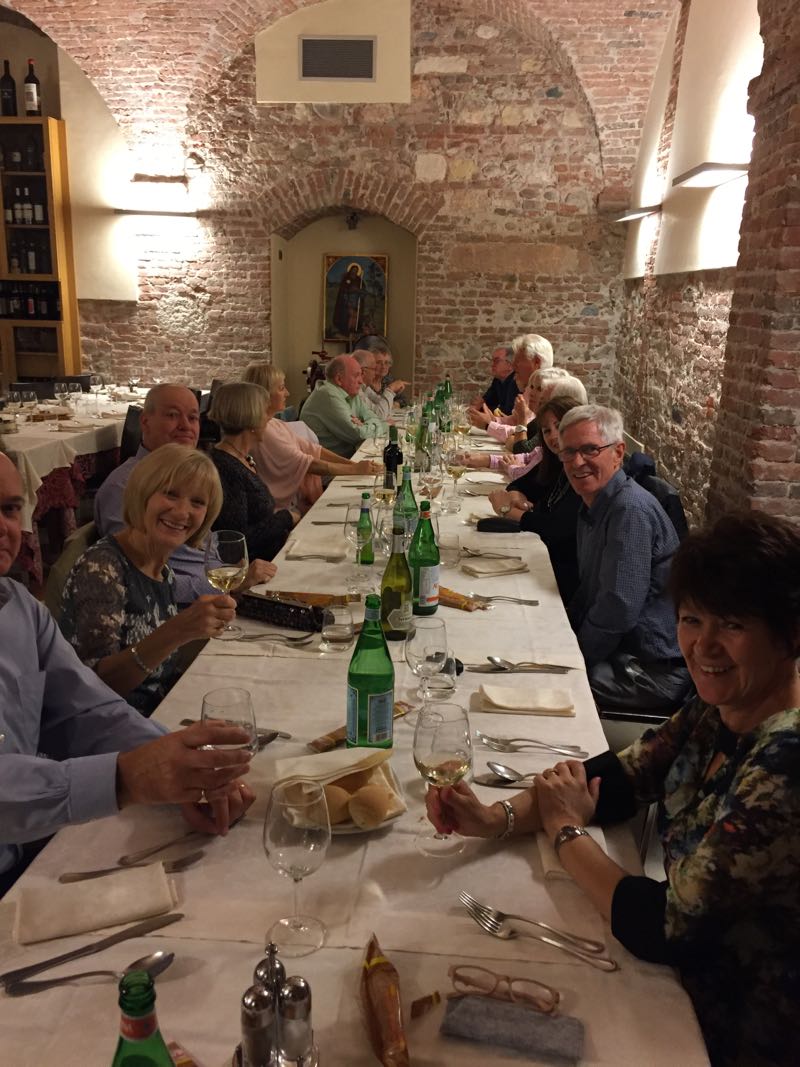 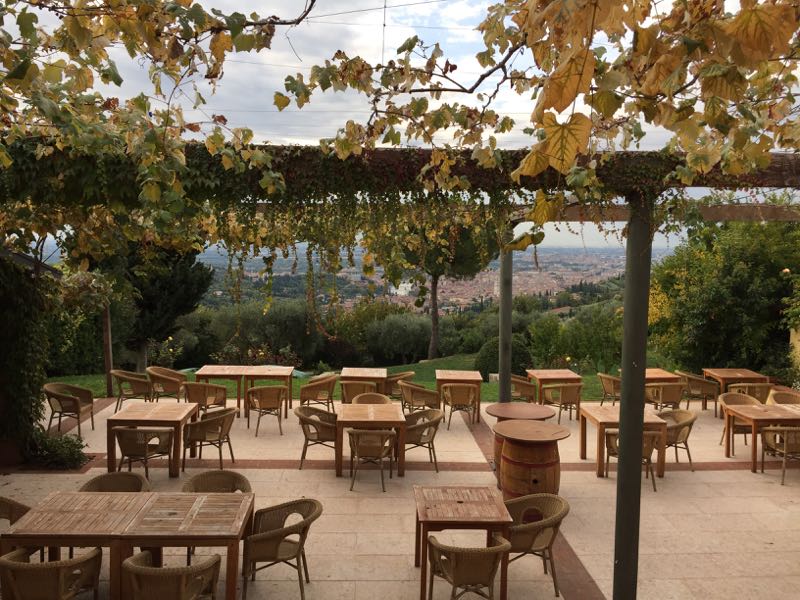 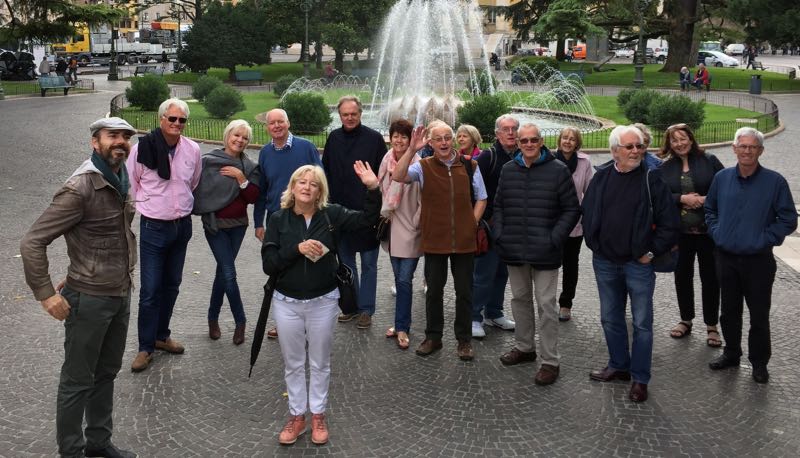 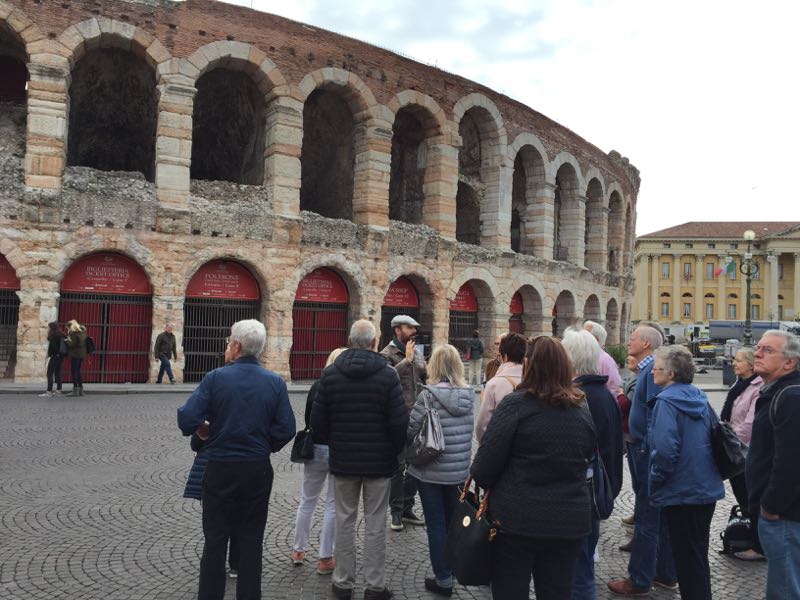 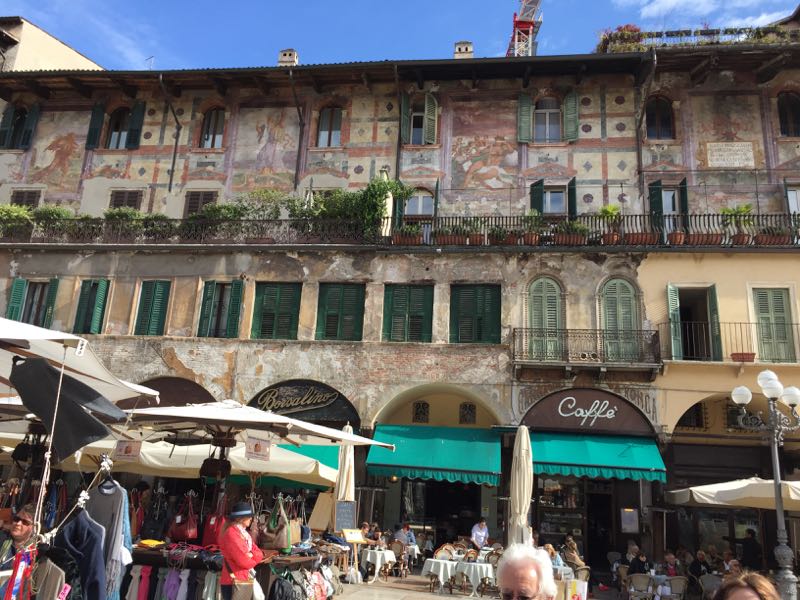 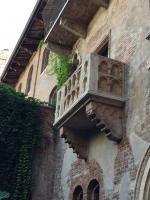 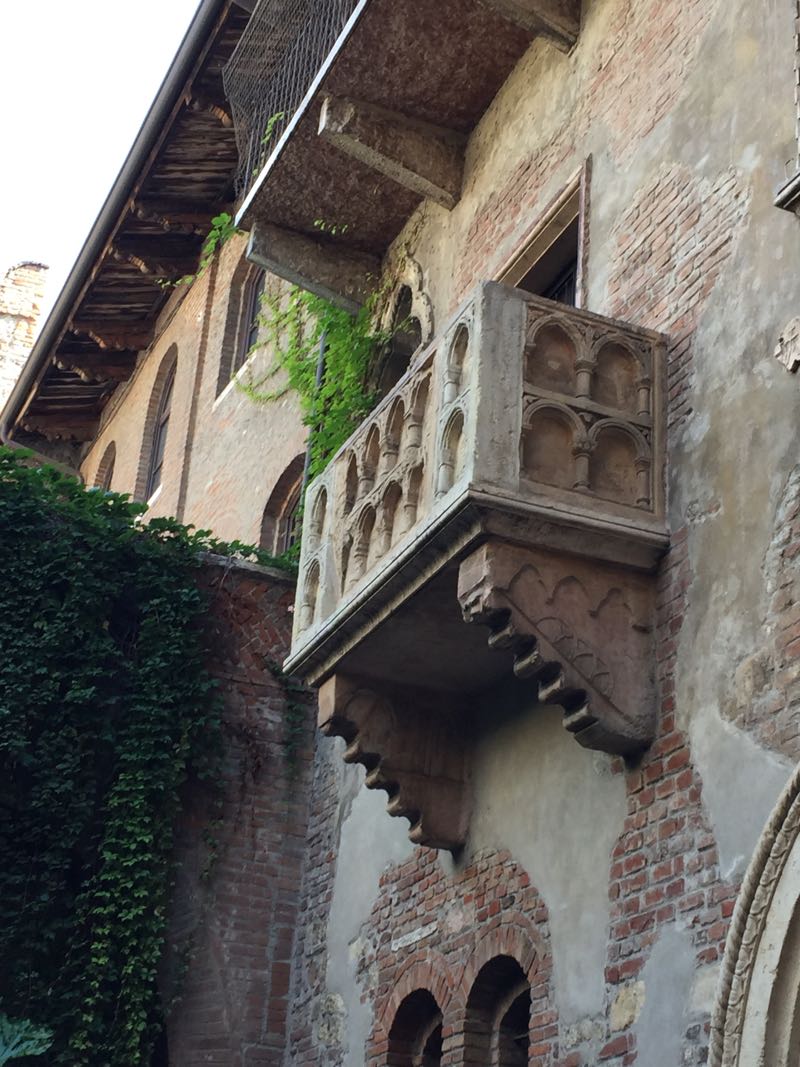 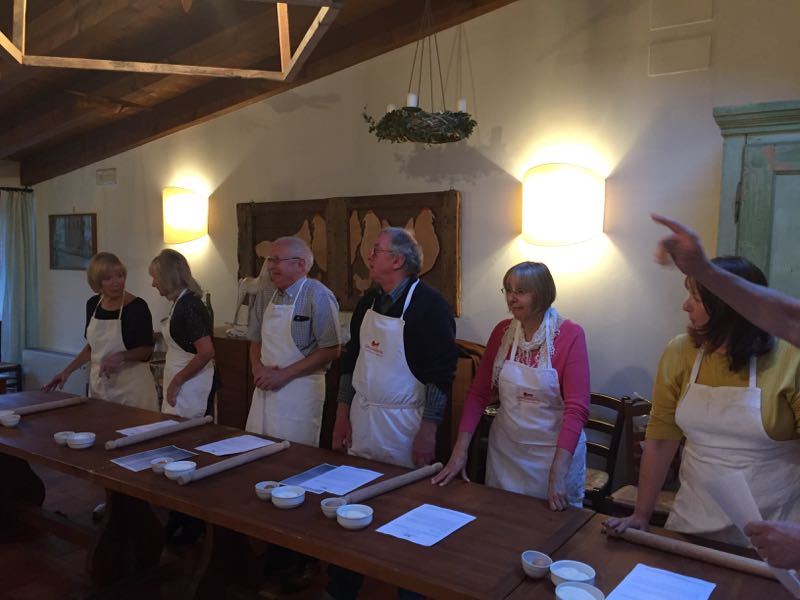 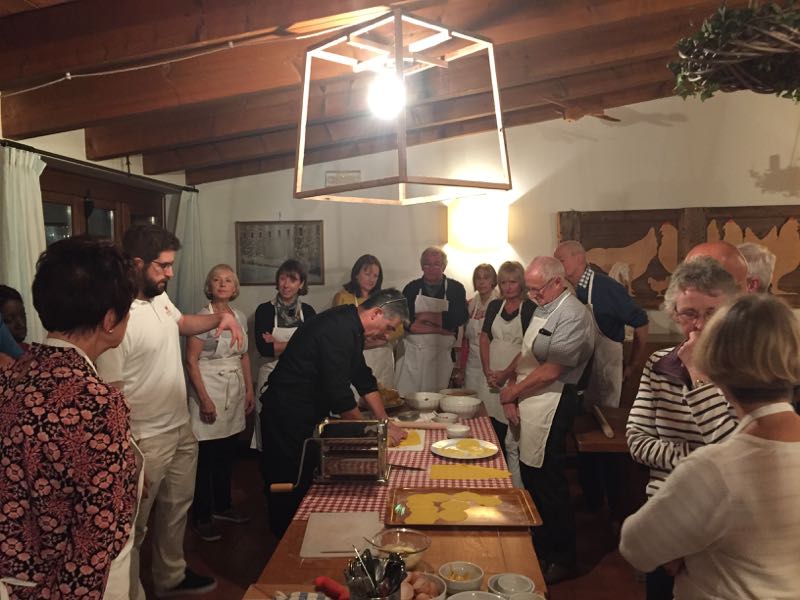 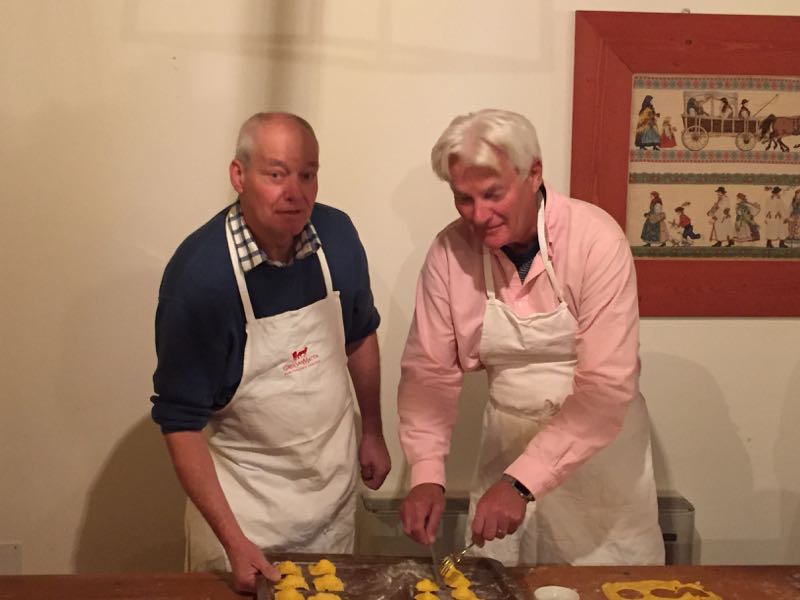 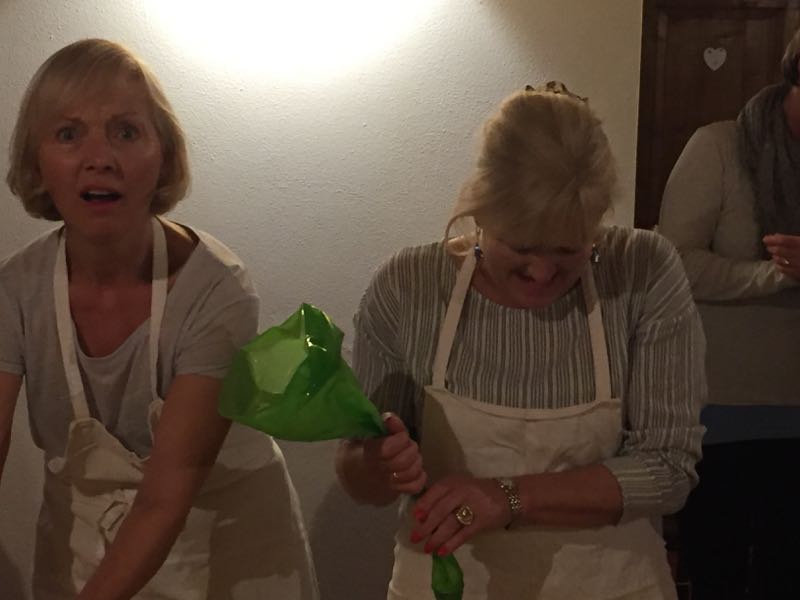 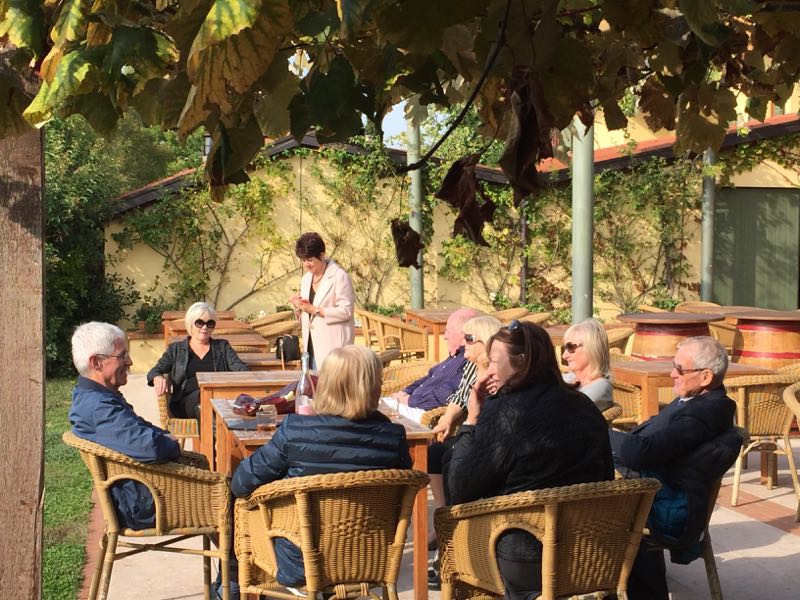 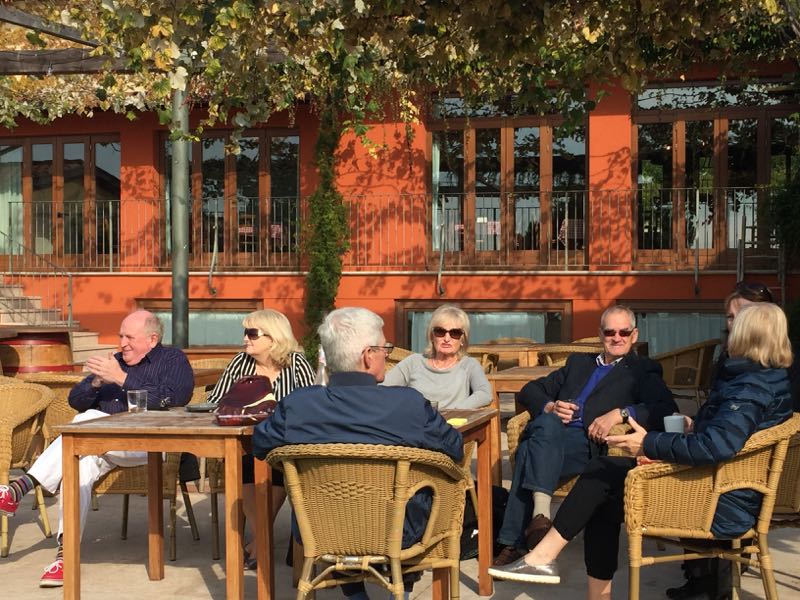 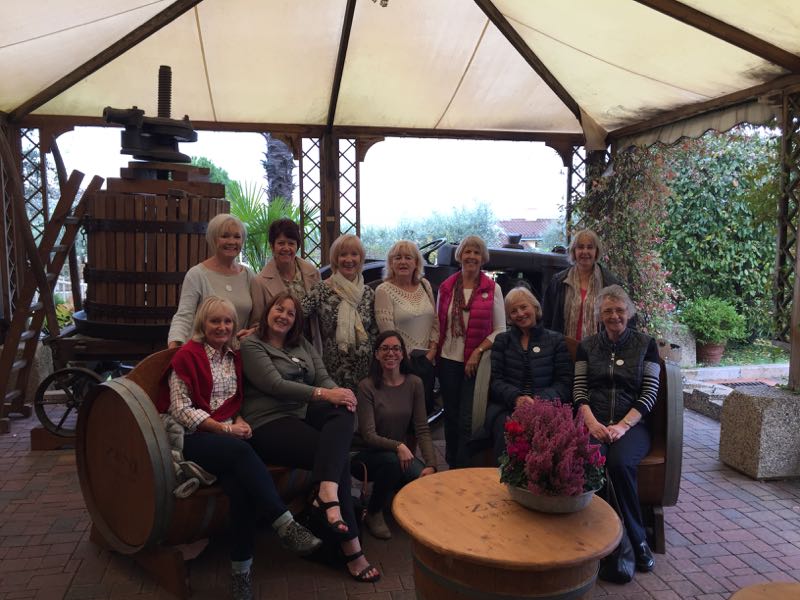 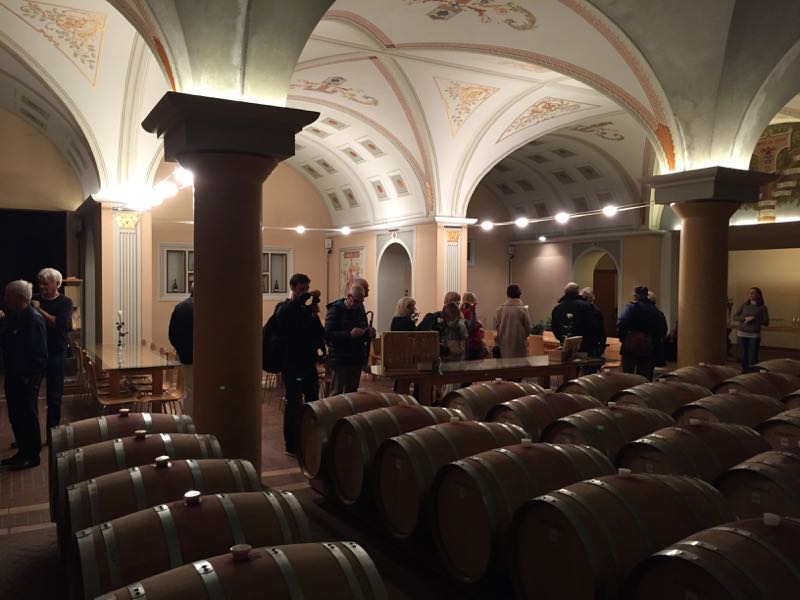 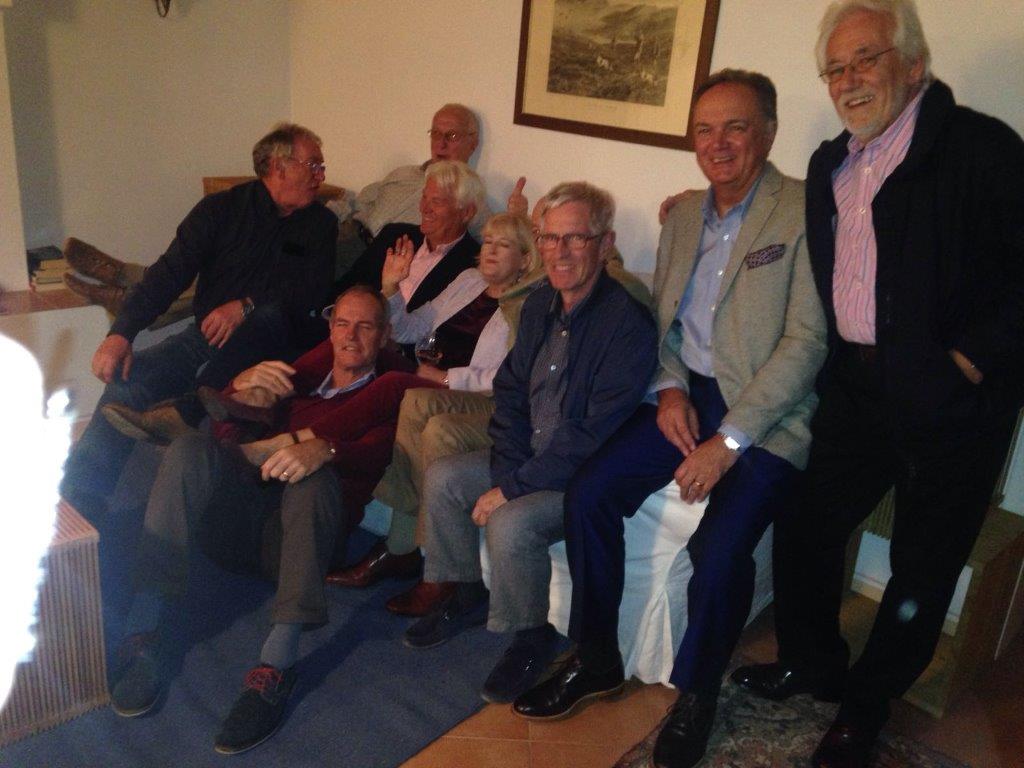 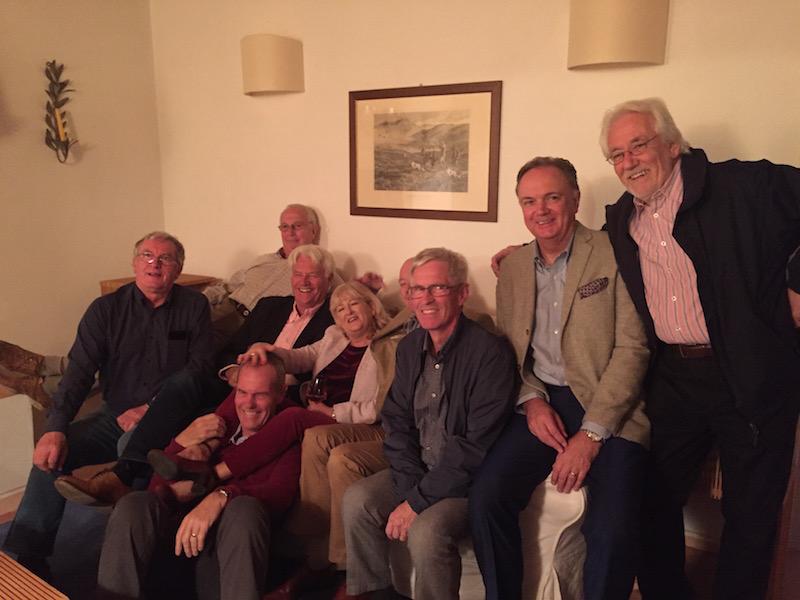 President Elaine planned and organised a trip to Verona over the period 8th-11th October 2016 and she and David were accompanied by 9 Rotarians and their partners.  The trip commenced with a flight from East Midlands airport to Bergamo [Milan] followed by a 90 minute bus journey to the hotel that is situated in the hills to the North of Verona and provides spectacular views of the City from both the rooms and the terrace/restaurant.

After settling in to the hotel [www.agriturismosanmattia.it/en] many of the group enjoyed a glass of wine taking in the vista from the terrace even though it did cool down a little as the evening progressed.  Dinner that evening was taken at a restaurant [sanmattia.eu] situated only a five minute walk away and it too had an elevated location on the hillside with some interesting vistas both outside and in!

On Sunday 9th October 2016 the group was taken to the picturesque walled village of Lazise [www.lago-di-garda.org/lazise-lake-garda.asp] situated on Lake Garda that was followed by a visit to a wine museum [www.best-italian-wine.com/bardolino-wine-museum.html] that also housed a vineyard.  Wine tasting was, of course, an important part of the visit and several bottles made their way back to the coach.  We then travelled a short distance to Garda where lunch was taken and for those not shopping a short trip by boat followed to enjoy the splendid views from the Lake.  After returning to the hotel members congregated in the somewhat ‘up market’ accommodation being enjoyed by the Lady President for pre-dinner drinks.  A short local bus ride took us into Verona to enjoy an evening meal in a delightful restaurant [www.ristorantegreppia.it] housed on two floors.  We were accommodated in a basement room that had a high vaulted roof and was surprisingly light as airy.  The food was exceptional to say nothing of the company.

On Monday 10th October 2016 we congregated in Piazza Bra next to the Arena [a Roman amphitheatre that is the site of opera performances for which Verona is famous] for a tour of the City in the company of a well spoken knowledgeable guide who showed us the main squares, described the history of the City, introduced us to some of the important buildings and completed the tour with a viewing of the well known ‘Juliet’ balcony.  After a leisurely lunch and free time in Verona we returned to the Hotel for a guided tour of the family run farm.

The small 25 hectare holding is situated in the Valpolicella region of Italy.  In addition they make olive oil, grow fruit for jam making and also provide some vegetables and fruit for the restaurant.  We were given a detailed explanation of the different wines that they produce and particularly the prized Amarone of which only 2000 bottles are produced in a good vintage year.  Following the tour we were treated to a wine tasting and further explanations although, sadly,  Amarone was not available as they had sold out!  Afterwards we were invited to don aprons for an opportunity to hand make our own pasta which was then used for lasagna and ravioli the latter filled with rosemary flavoured mash.  This mixed bag of culinary outcomes then formed the basis of the evening meal.  We were joined for the wine tasting and pasta making by a German couple visiting the hotel.

The next morning it was time to say farewell after some more sparkling rose taken on the terrace after breakfast.  The trip back to Bergamo and then East Midlands was uneventful.  Elaine and David stayed on in Italy for a further short period.

This trip was well planned and organised so thanks to President Elaine for her efforts in bring this to fruition.  All the attendees had a great time and, as would be expected, much of the conversation centred on how to promote Rotary both at our local level and Nationally/Internationally.  It seems likely that this event, which revolved around fellowship and friendship, was at least as effective, if not more so, in addressing the future aims and direction of our club as would have been possible at a conference.

[Secretary to The Rotary Club of Kibworth and Fleckney]