Like any piece of equipment, TGR needs regular maintenance during the season on the seafront, and more major off-season works. This page is intended as an update to the more detailed 2003 history from its "˜founder"™, Barrie Smith.

In 2002/03 the Club agreed to take on major repairs to the TGR.A member donated a new twin axial trailer on which to mount the ‘body’ as the old one had rusted away.  John Fitt removed the old body and fixed it to the new trailer.

Then the 8 shutters on the front of the TGR were removed and an electric aluminium roller shutter was fitted in their place.  This has helped the duty Rotarians to open and close the TGR and stop the shutters being blown down the seafront with strong winds.

A ‘skirt’ was made to cover the trailer and was sign-written with the Rotary Club details.

The roof line was changed, with a drop to represent a seaside tent, and the whole structure painted in stripes to match.

All the puppet drums were painted by the Club members and are overhauled each year.

New puppets such as the Tweenies, Bob the Builder and TeleTubbies were now in the TGR to keep up with what the children are watching on TV.

A new fence was built, and as with the rest of the TGR it all bolts together so that it can be taken up and stored in the winter months.

The maintenance for the last few years is now carried out by Mike Baker, as the original ‘builders’, Barrie Smith and George Jones have retired from Rotary, although George still helps out when Mike is away.  Mike is still amazed at the ingenuity of the mechanics of the puppets, many of which were hand-carved by Barrie Smith, and by the electric control systems designed by these two.

Spares are in short supply, but new bits are found and modified to fit.

In 2006 it was worked out that the balls dropped some 200,000 times over the season to raise approx £2,400 for Rotary Charity funds.  We have to replace the balls twice each year, as they wear out.

In 2009, the control switches of the shutter and TGR were moved to the side, which makes it easier for Rotarians to open and shut the TGR each day.

During the 2010 season, a major problem arose with the two ‘sequence switches’ that control the opening of the drums and the jackpot.  These are now 27 years old and the plastic is splitting.  New switches were designed and the jackpot switch built, containing 16 micro-switches with a disc fitted with a cam and driven by a 50v motor.  This was installed and proved to be a success.

The main switch driven by gears in sequence with the main wheel has been built and has been fitted when TGR finished the season at the end of September.  The new switch will enable adjustments to be made easily and will stop faults like more than one drum opening together or Jackpots coming when they should not.  Work on this is complete.

George Jones and Mike Baker have also made plans to have the music on ‘chips’ instead of the tape as at present.  Also we have thought to have the sound of a train when Thomas the Tank comes out, and the wheels turning...

Another idea is to have Duckula’s eyes flashing and maybe Woody and Buzz Lightyear in place of one of the other puppets.

John Fitt has volunteered to repair the woodwork and upgrade the rear doors to prevent the rain coming in.

We have permission to use the Carnival Store in the Football Ground again, but may have to pay rent.  They are planning to have electricity connected up which means that the TGR can be ‘run up’ in advance of it going down to the seafront next year, something we could not do this year.

We had hoped to carry out repairs and modifications during the winter but were unable to do so.

Thomas the train was removed at the end of the 2011 season and will now have its wheels rotating when it comes out during the Jackpot sequence.  This work was again done by George Jones.

The fence has been repaired by Steve Jones and painted by Club members as it was now 11 years old. 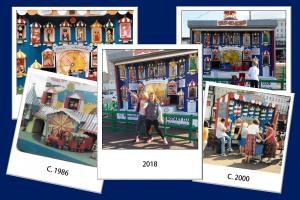 The Telly-go-round has been taken back to its winter quarters after a terrific 2019 season when it has raised over £6,000 for our charities, for maintenance and a rest so as to be ready for the 2020 summer season!