Eight out of ten Club members made it to Conference together with partners. Unfortunately two members were unable to attend through ill health.
The first event on the Friday was the golf competition(see report below) in which we were represented by John Addison and David Austin, alas no trophy this year.

We met in the foyer bar of The Kendrick hotel at 7.15pm when president Stephen bought the first round, we then walked to a local Chinese (Welsh really) restaurant for a banquet meal.

Saturday morning revealed the keen conference delegates amongst us, they were first down to breakfast, or maybe that was just to be able to claim a bay window sea-view table.
[editor note:-Chris Wells from the Market Harborough Rotaract Club was one of the speakers. Well done to him. https://www.facebook.com/marketharboroughrotaract ]

The actual conference was in the Theatre Cymru, a super auditorium which has over the years hosted many auspicious events. The speakers in the two morning sessions were inspiring with a wide range of subjects being covered. One that caught attention was the Woodland Trust asking that a tree be planted for each Rotarian. An idea emerged that perhaps there could be a joint project with the two Market Harborough clubs to create a planting to make an impact somewhere locally.

Saturday afternoon was free time, to walk along the prom, ride the tram or cable car up the Orme, or simply wander aimlessly round the shops.

Saturday night was Gala Dinner Night at the Venue Cymru, a reception drink or two followed by a meal which gathered pace after a slow start. It has to be noted the entertainment was perhaps a little disappointing, The Jersey Four Tribute group who sang to pre-recorded music. It did however get people up “dancing”. ( Photos see Hot Gossip)

Sunday morning started with Michael Weatherill receiving a verbal barrage from “mine host” Will, for pouring coffee from the wrong jug! As he was a former Rotarian they made up.
The conference concluded with two sessions during the morning but our representation was somewhat reduced.

All in all an excellent weekend with fellowship flowing freely. John Morgan

Golf at the Conference.
David Austin and I represented the club in the Conference golf tournament. We played at Maesdu golf club which was a mixture of links and parkland golf and about 30 competitors took part. The course was very interesting as you needed to put your ball in the right place to get a good score. David and I played with the President from Bailgate, Lincoln club. The weather was a little wet to start with and then became windy which made the playing conditions quite tricky. The team and individual competition was won by St Ives club, with the men's individual score being 33 points,a member from Oadby Launde won the Ladies prize on 26 points. which reflected the low scoring. An enjoyable time was had by all. 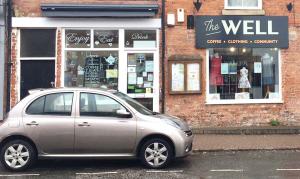 Brief details of past meetings 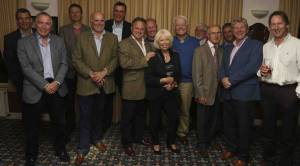 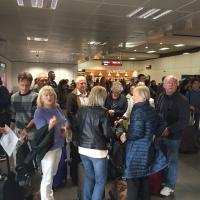