Rotary International is now so close to eliminating polio from the world. Read the story below. Over the years Tiverton Rotary has contributed over £12000 to the cause.

Perhaps Rotary’s biggest international challenge has been its determination to eradicate Polio. In 1985 Rotarians took the amazing decision to immunise every child in the world in order to end this scourge. Subsequently the WHO has participated and more recently the Bill Gates Foundation has matched every penny raised by Rotary. Today, thanks to the pioneering work of Rotary, Polio is almost eradicated.

It is a disease which primarily affects children under 5.

The Purple for Polio initiative is one launched by Rotary in Great Britain and Ireland to raise funds and awareness for their efforts to eradicate polio across the world and promote the work of their global campaign, End Polio Now.

Rotary’s pledge for a polio free world was made  when there were 125 polio endemic countries, 350,000 cases and hundreds of new cases every single day. In 2018 there were only 19 cases in the entire world but as long as there is one single case anywhere children everywhere are at risk.

Thanks to Rotary, and the support of their partners the World Health Organisation,, Unicef, the Centres for Disease Control and Prevention and the Bill and Melinda Gates Foundation, there are now just two countries still classed as endemic: Pakistan and Afghanistan.

Already Rotary Clubs around the world have invested over $1 billion in the target to eliminate polio completely. To finish the job over 2 billion doses of oral polio vaccine have to be administered each and every year in over 60 countries until the world is finally certified polio free. The Gates Foundation has promised to treble donations made in the future.

So eradication is now so close! However there have been signs of the disease rearing its head in parts of Africa in 2022. The Club is raising funds in 2022 by selling 4000 crocus corms whose flowers represent the purple dye mentioned above.

Helping our Community and Raising Funds 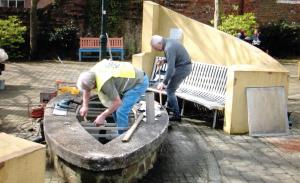 We are very active in our community 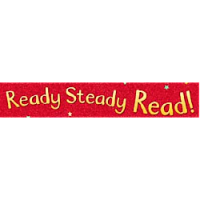 Helping children who have reading difficulties. Currently in three schools in the area and subject to suitable consultants being arranged and continuing funds being available from Rotary.

A friendly Family Dog Show was organised by the Rotary Club under the auspices of the town market manager for the first time in 2022 and proved very popular and successful. 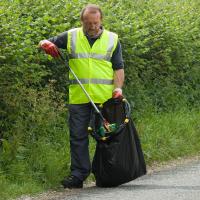 Helping to keep our community free of litter

Rotary International is now so close to eliminating polio from the world. Read the story below. Over the years Tiverton Rotary has contributed over £12000 to the cause.

The Exeter Triathlon Club organises one of its events in Tiverton each year and the Tiverton Rotary Club assists by marshalling the route. The 2022 event was on Sunday 8th May the previous two having been cancelled because of the pandemic.