A sort of Handover, awards of Paul Harris Fellowships plus a talk from Dr JOHN COPLEY on "Exploring the Deep Ocean". (You saw him in Blue Planet a few months ago.) 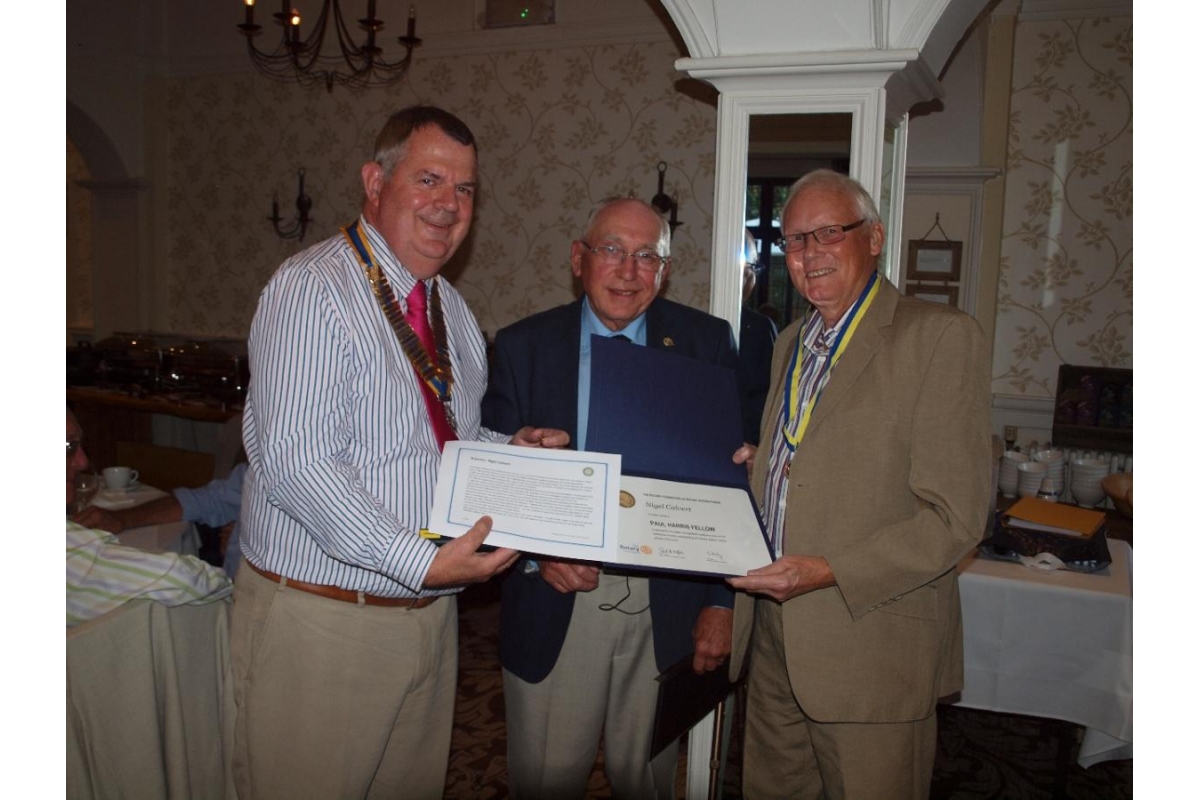 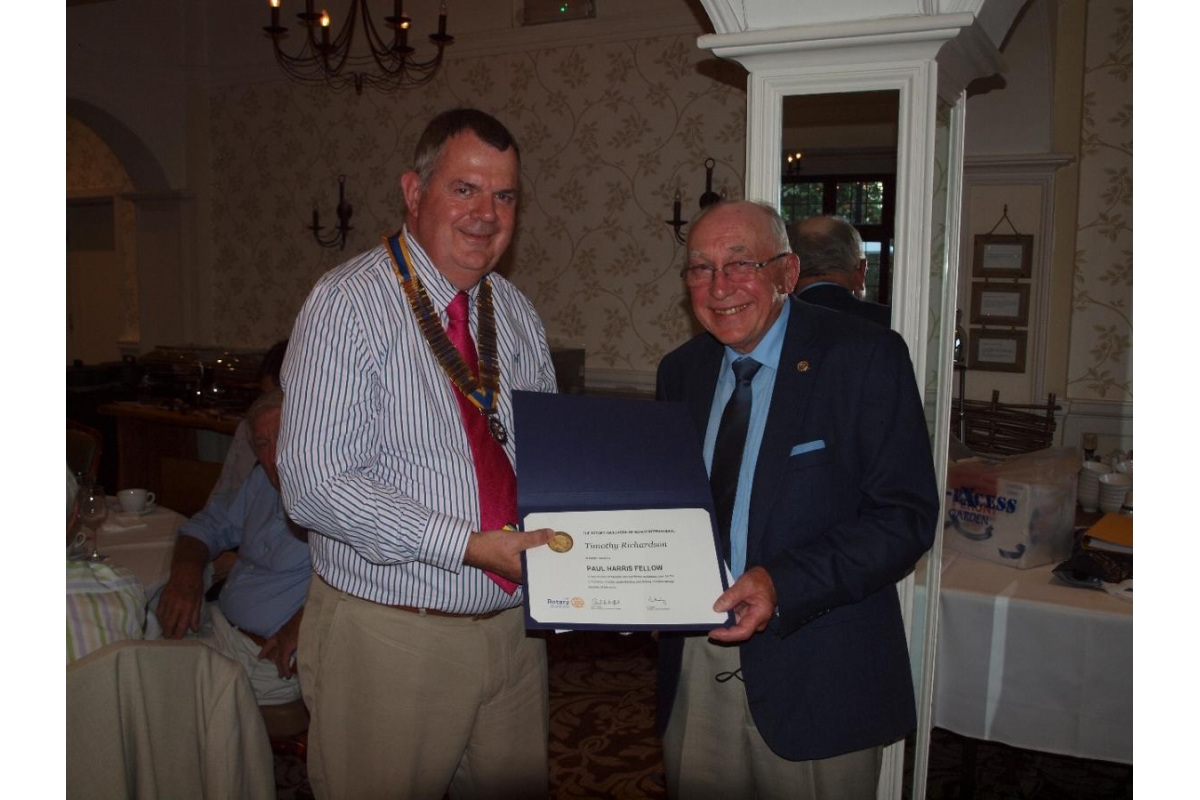 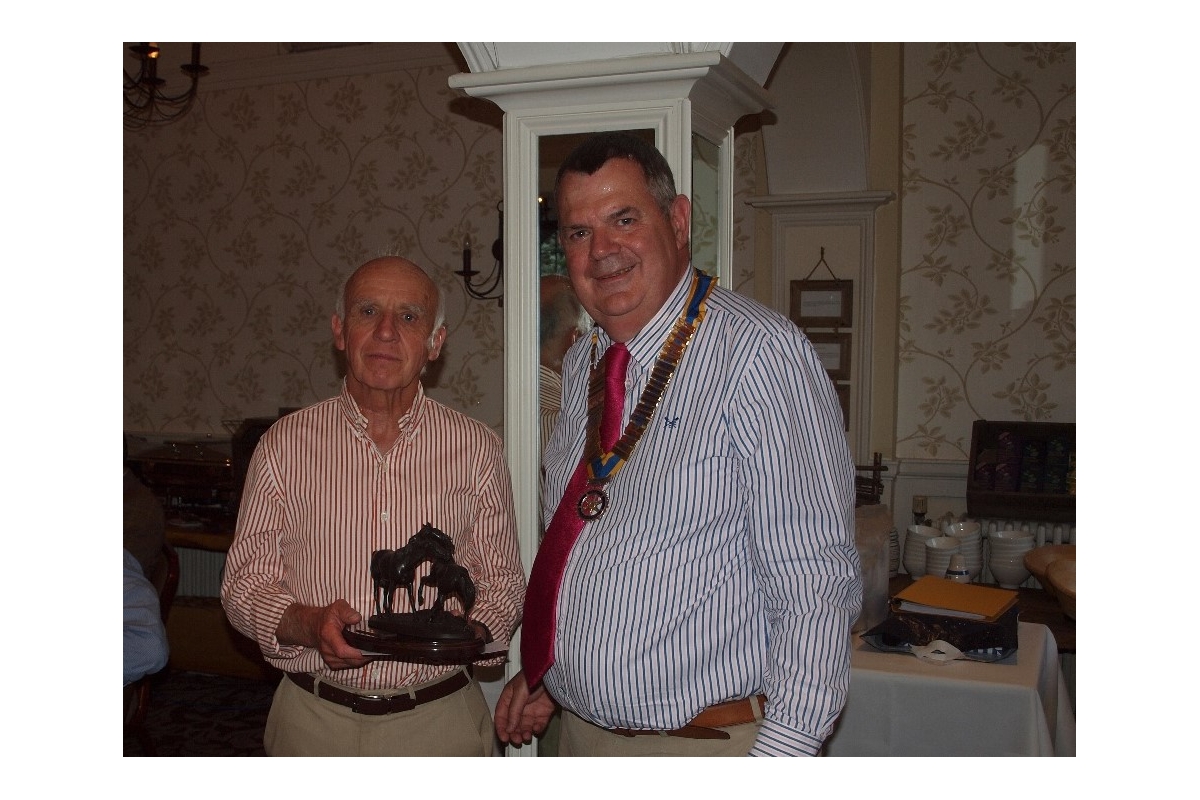 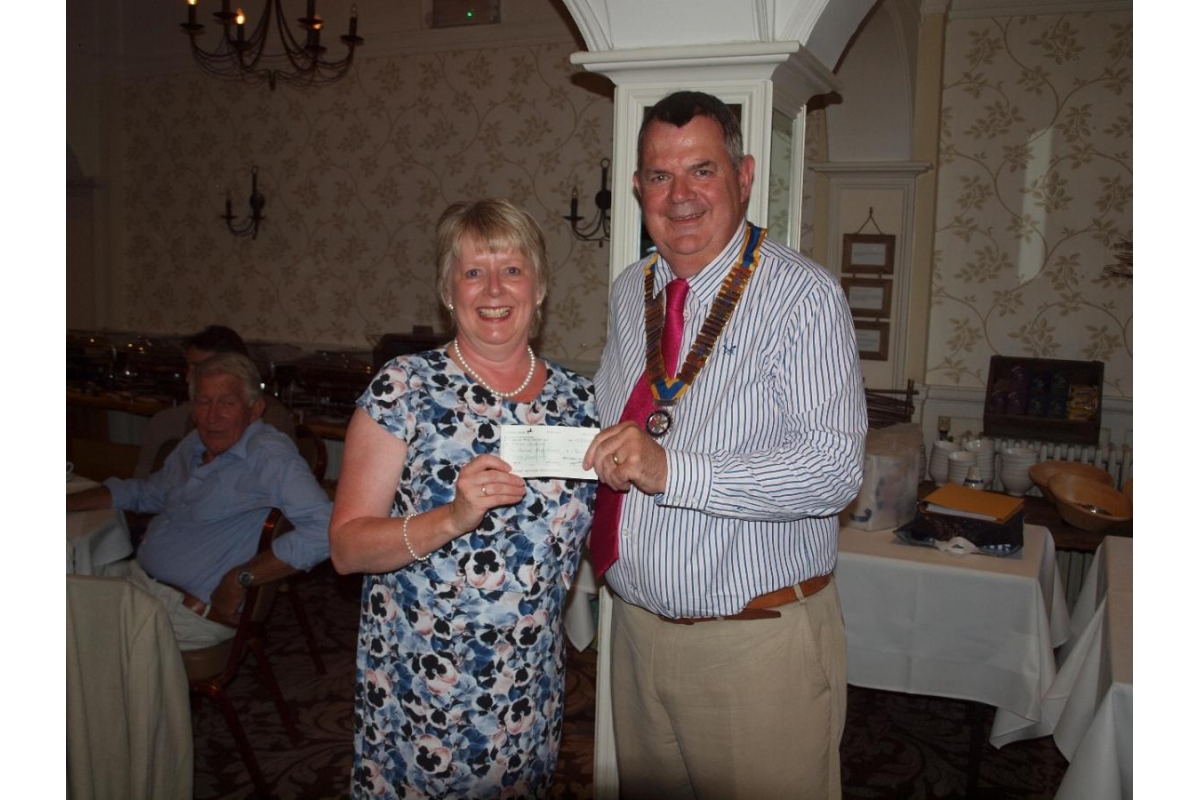 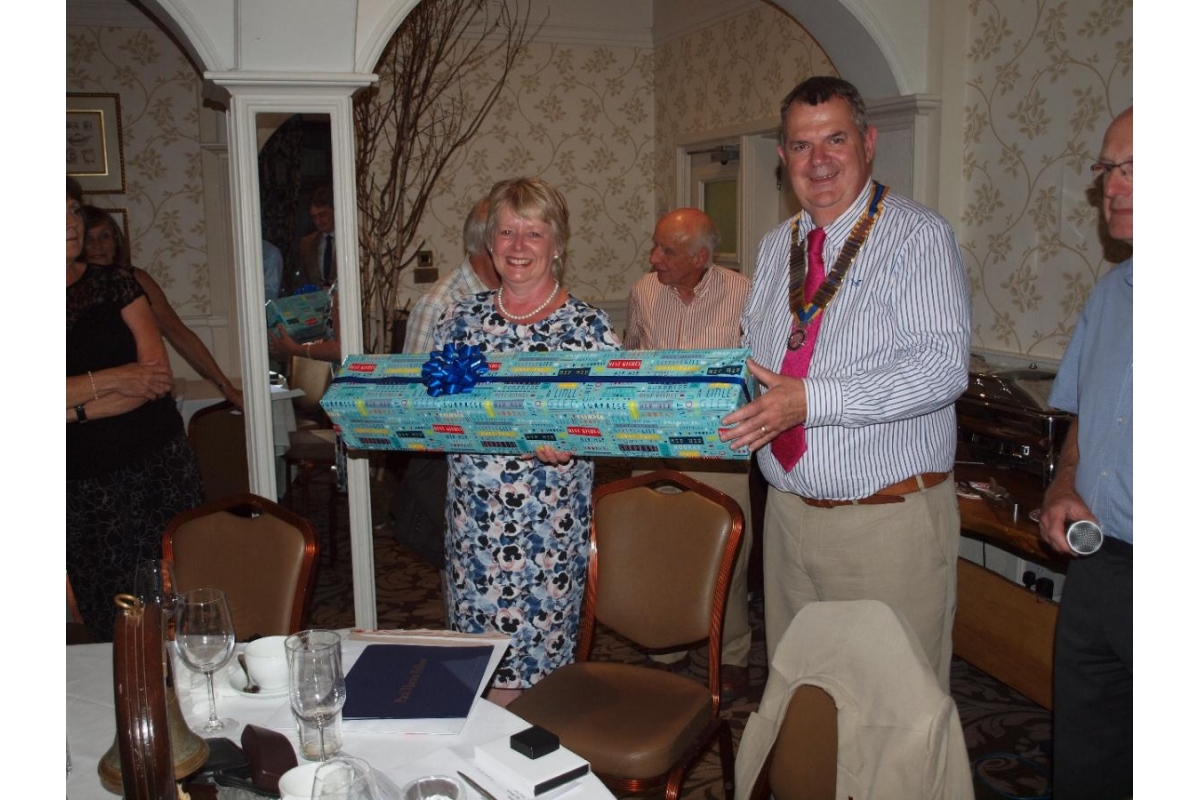 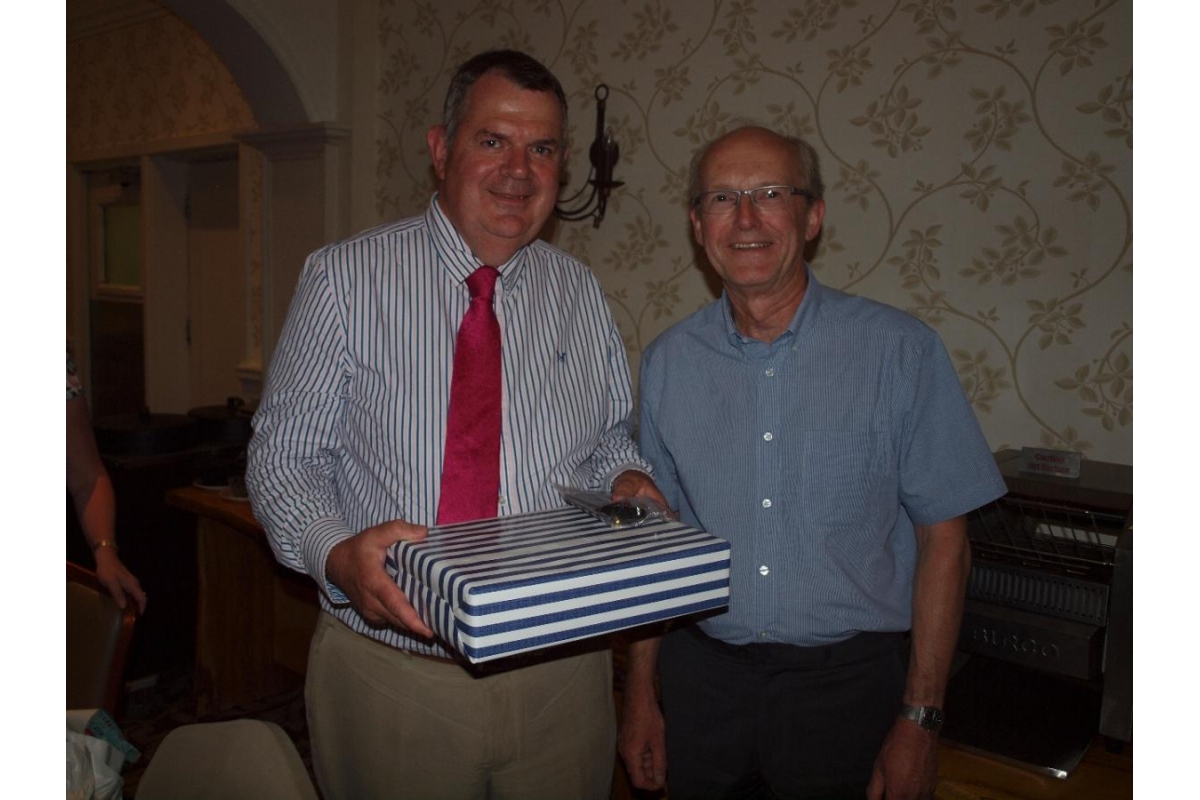 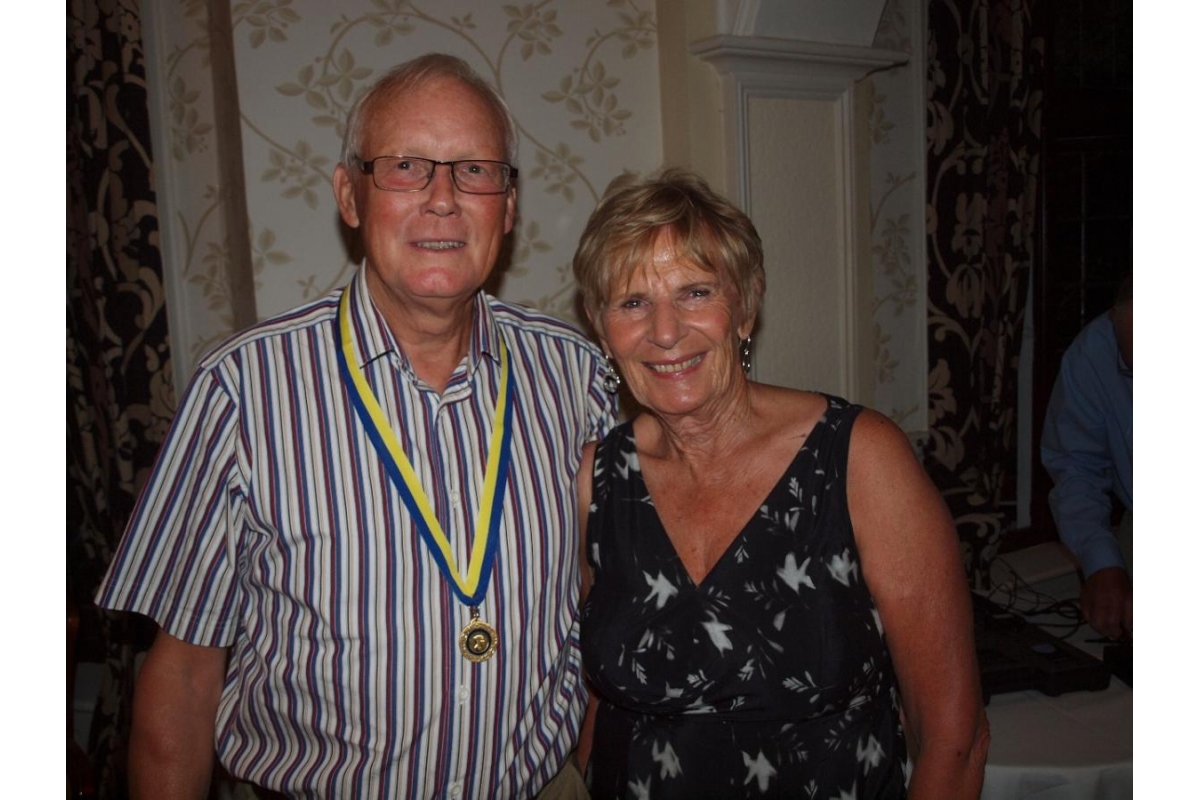 Ann played a big part in Nigel's success with the golf. 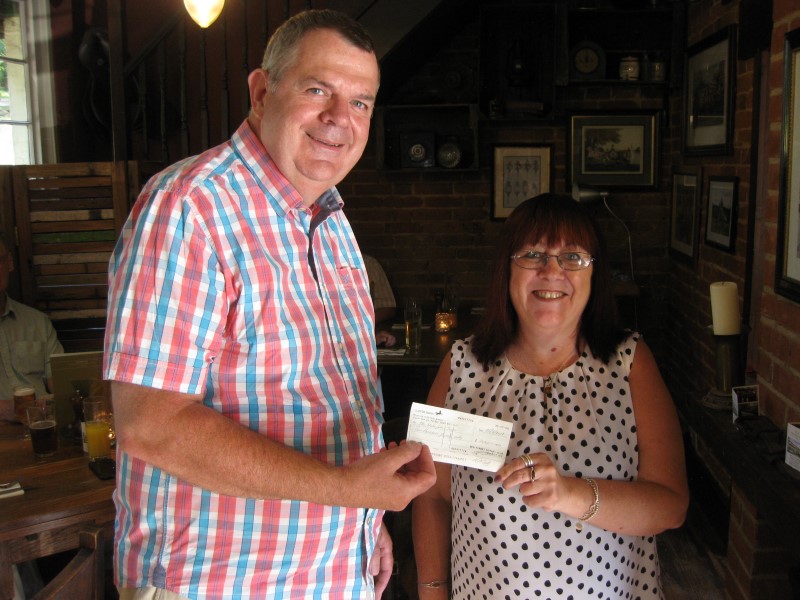 President Tim with Donna Cullimore of The Waterfall Trust.

After dinner President Tim opened the main event but stating that, as we are aware, Philip Dinn is officially President Philip but is unable to be with us due to his illness. He has had his transplant but necessarily is being nursed in Southampton General Hospital in strict isolation while his blood rebuilds sufficiently for him to resume a normal life.

(As explained at Club Assembly It is Philip Dinn’s intention to return to the office of President and complete the year as and when he feels fit and able so to do. Until that time, a Club Service triumvirate led by Tim Richardson, assisted by Tony Roe and Lawrie Lansdell will run our meetings and all the presidential and club service functions accordingly.)

President Tim (technically Past President Tim) gave a review of his year, thanking all involved for many successful events both social and fundraising. Tim then announced that he was delighted to present Rotary's highest award, a Paul Harris Fellowship (PHF), to Nigel Calvert, much to Nigel's surprise and delight. Tim the read out the certificate details explaining why he had been selected for this honour and then handed over the medal and presentation certificate. (see below this report).

The Club Chairman of the PHF Committee Sam Turner then took over the microphone and much to Tim's surprise announced that the committee had decided to award a Paul Harris Fellowship to Tim (twice President). He read out the certificate explanation (see below this report) and presented Tim, in his turn, with the medal and presentation certificate.

Tim then announced that the recipient of the MacDavidson Award for the member who had done most to assist him and the Club in the past year was Ken Garrod, Chairman for several years of the Community and Vocational Service Committees and Sports Officer.
Additionally he presented a cheque for £2,000 to a lady he knew well, Fundraising Manager of Wessex Heartbeat, Tina Richardson. This had been one of the Club's main charities this year. Tina expressed grateful thanks not just for this magnificent donation but for the Club's practical and financial support over many years.

The last presentations were to the President's wife, Tina, for all he help over the year and to Tim for his very successful twelve months

After a short break we had a superb speaker, Dr John Copley Associate Professor in the Oceanography Department of Southampton University, the first British person to dive 5 kilometers below the sea and an advisor and on screen contributor to Blue Planet II. He have a splendid illustrated talk and introduced us to some amazing creatures filmed below the Antarctic Ocean.

EXTRA PRESENTATION. President Tim had arranged to present a second cheque during the evening This was to be to The Waterfall Trust, the second President's Charity, a support group for women with drug and addiction problems. Due to a sudden crisis at their ofices that evening that was not possible but at our meeting on 8 July at The New Forest Inn he presented a cheque for £,2000 to Donna Cunnimore  of Waterfall. Donna had been manager of the Women's Refuges in Hythe and Eastleigh and was know to us. Donna gave a short talk to members present on the work of the Trust and expressed her gratitude.

Your fellow members have decided to honour you for your commitment to Rotary and the New Forest Club. You joined our Rotary Club in 1980,and have served on all of the Club committees, lending your expertise particularly with fundraising activities.

In 1982 you were part of the small team who  organised the annual Black Tie Boxing Evenings. Your many contacts in the business community made it an instant success which raised £1,800 in its first year for Foundation. The event ran successfully for 10 years until 1992 and raised many thousands of pounds for numerous charities.

In 1985 Les Puttock formed a lasting relationship with Bramshaw Golf Club to hold an Annual Golf competition. You were part of the original team and have continued to this day some 33 years later. Originally a Pro-Am Competition involving over 40 teams and Hampshire Golf Professionals it has raised over £100,000 for charities and remains a high profile event for the Club.

This event would not be as successful as it is without your continual efforts throughout the year maintaining good relations with players and sponsors, and other golf clubs who kindly provide valuable  playing concessions for winning teams. All the money raised  goes to charities chosen by the President and the club members.  Together with your lovely supportive wife Ann, you are the unsung couple who quietly, efficiently, and reliably gets the job done, year in and year out. It is a commitment that is appreciated by us all, and the many charities that we have been able to support.  You also undertook to cycle from Land’s End to John o’Groats raising money for our club after recovering from Prostate Cancer.

Your Club has therefore determined to honour you with a Paul Harris Fellowship. The New Forest  Rotary Club does not take this step lightly and  we look upon this award as a mark of our very high regard for your personal commitment to the Rotary Motto,

Your fellow members have decided to honour you for your commitment to Rotary and the New Forest Club. You joined our Rotary Club in 2005, and became President in 2010-11. Your professional involvement with the Business community and a longtime member and President of the Local and National Chamber of Commerce has brought many contacts and skills to our Club.

You have been active as Membership Chairman, and been very involved with Club Service matters in recent years, during significant change in Rotary. Your cheerful and thoughtful approach, managed this change by careful planning, which the members adopted positively, helping to move the club forward and saving costs where possible.

Your willingness to take on responsibility came when in early 2017 President Philip Dinn fell seriously ill, and you assumed his role, until Sam Turner took over in May. You agreed to become President  for a second time in 2017-2018 and will continue with others from July 2018 until Philip recovers to resume his office.

You have been an active fundraiser specializing as Quiz Master on many occasions that have raised funds for local and International projects.  You have supported your wife Tina with several events for Wessex Heartbeat, continuing our Club’s long association with the Charity.

For some years you have served as Rotary GB&I’s Insurance Adviser saving the Rotary GB&I’s brokers considerable time dealing with Rotary Club issues. This has brought considerable benefits to all clubs in the Uk and a significant saving in additional insurance costs.

Your Club has therefore determined to honour you with a Paul Harris Fellowship. The New Forest  Rotary Club does not take this step lightly and  we look upon this award as a mark of our very high regard for your personal commitment to the Rotary Motto,