President’s Mission Statement for the Rotary Year 2020/21. / Moments from history. 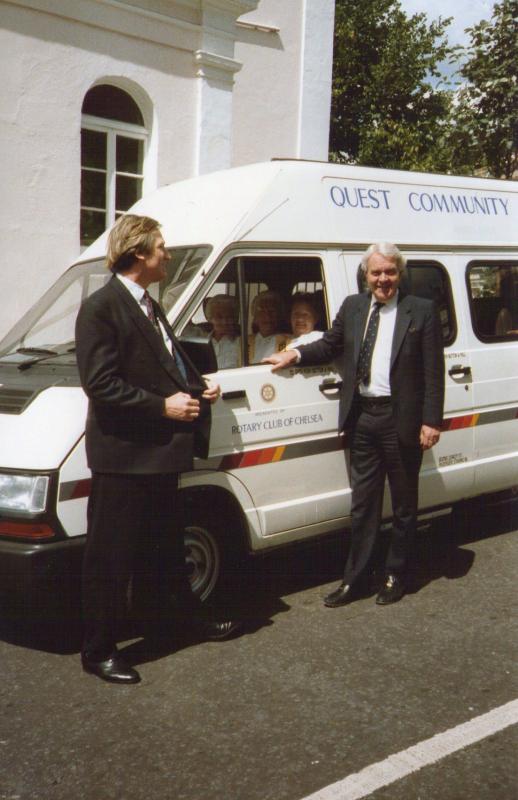 Thank you to Hon. Member Tony Rickard for the story from memory of the  "handover" of the vehicle Chelsea Club raised funds to purchase for the Octavia Hill & Rowe Trust Luncheon Club. This is believed to have happened in 1997:

“I joined the original Committee to support Members Paul Howard and Nick Phillips; Nick was then posted to Paris and Paul moved to Chichester! Nevertheless we persisted and eventually managed to scrape up enough to fund the purchase of a greatly discounted "ex demo" Renault Trafic complete with tail hoist. I handed it over, in my Presidential Year, to Nick Scott MP for Chelsea who was then Minister for Social Security, taking the opportunity to point out that the cost should have come from his Budget - not ours!

A couple of months later I had a call from the Chiropody Dept of Chelsea & Westminster Hospital asking if we could buy them such a vehicle to collect their hobblers. On enquiry it was revealed that they could fund drivers but not find capital for the bus! They had previously been provided with a vehicle by LRT. When I spoke to the head man some ten minutes later - we had lunched when Paul, Nick & I were investigating vehicle suitability- it emerged that a) no vehicle had been requested for the coming year and b) there was one available. Two phone calls later (one telling her who to phone and one doing so) they got their bus.

A perfect example of Rotary in action!”

President Urs Halter and the Rotarians of Kensington and Chelsea Rotary Club (RCKC) held their meetings of 2021.