Hatfield may be a small town but has a big place in history – not just in Britain but around the world. Founded before the Norman Conquest in 1066, Hatfield has played an important part in Tudor, Victorian, and aviation history.

Hatfield is 20 miles north of London on the Great North Road and rail routes from King’s Cross in London to Cambridge and the North.  Hatfield was recorded in the Doomsday Book as Hetfelle; A right to hold a market in the town was granted by King Henry III in 1266.  The manor was then owned by the abbots (later the Bishops) of Ely hence the later name for the town of Bishop’s Hatfield and the inclusion of Bishop’s in some building names and locations around the town to this day.  The Bishops built a palace near the parish church of St Ethedreda; the Great Hall of 14.80 – now known as the Old Palace – still stands.

From 1538, after the dissolution of the monasteries under Henry VIII, the town became known as King’s Hatfield.

Princess Elizabeth was resident at Hatfield House when the death of Queen Mary in 1558 resulted in her accession to the throne as Elizabeth I. She held her first council of ministers in the Great Hall.

Elizabeth later appointed William Cecil as her principal secretary. In 1607 James I exchanged the Cecil Residence of Theobalds near Enfield for other properties including Hatfield House. Robert Cecil the first Earl of Salisbury started building the current Hatfield House at the end of that year: his descendants occupy the house to this day 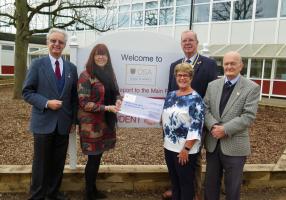 Hatfield Club had a joint Quiz Night with Onslow St Audrey’s School in Hatfield, which raised some £780. Our Club then donated £220 to “round off” the donation to £1,000

We organise youth projects in partnership with the Rotary Clubs of Welwyn Garden City, Potters Bar and Brookmans Park. We are the Mid Herts Rotary Clubs