Show off your vocal or instrumental skills, classical or modern, in the National Rotary Young Musician competition. 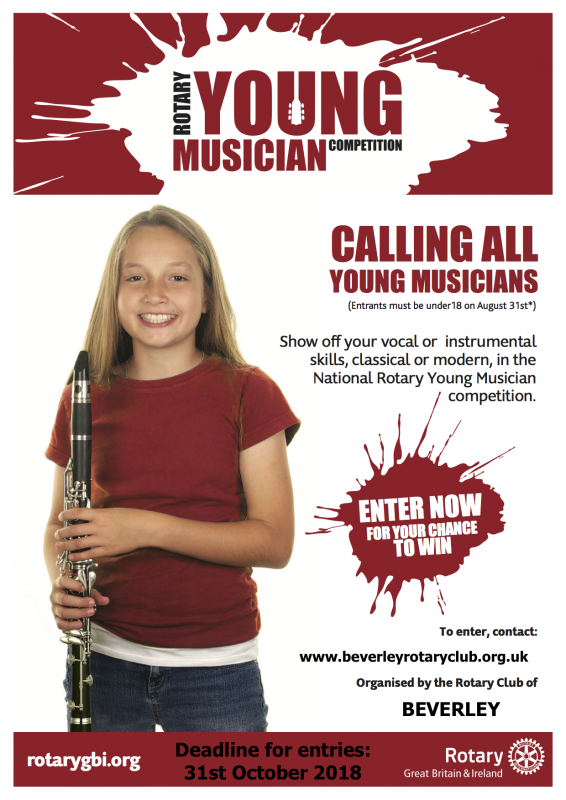 The first round of this year's competition will be on the 17th November 2018 at The Conservative Club, Beverley.  Full details of the format for the day will be sent by email after the closing date.

This is a competition at which competitors are judged within the context of a live performance. No recorded medium, in any format, will be considered and in Regional and National Finals will not be accepted. Competitors perform a selection of works of their own choice.

Competitors may perform the same pieces/songs in each and/or subsequent stages.

Competitors may perform from memory or from music at any stage. In the case of vocal candidates, it should be remembered that part of the assessment of the performance concerns communication with the audience and performing from a copy of music may prevent candidates from achieving this criterion to the fullest extent.

Competitors should be accompanied by a single instrument in sympathy with the performance; vocalists may accompany themselves. In the case of vocal, guitar and percussion candidates only, CD backing tracks are permissible. However, the backing track must not contain the part being performed by the competitor; in such cases where the backing track does contain the part being performed by the competitor, the judges will disqualify such candidates from the competition. Backing tracks are solely the responsibility of the competitor who must provide the performing medium (audio player, amplifier etc) and who will be permitted to have someone to operate the equipment. This will not be the responsibility of the organiser.

There may be occasions when the context of a performance does not require an accompaniment e.g. in the context of traditional folksongs or music written expressly for solo instrumental performance such as J. S. Bach’s Cellos Suites or Debussy’s ‘Syrinx’ for solo flute. In such cases, candidates would not be expected to ‘manufacture’ an accompaniment never intended by the composer.

Persons with appropriate skills will be appointed by Rotary.

For regional or national finals, a Rotarian will not be appointed as an adjudicator.

The adjudicators will judge each performance according to:

Three musicians for each category will be selected on the day of the competition. They will be invited to perform at a special Rotary event in mid-December when the overall winner (who will go through to the next round of the competition) will be announced.

more Create a stir in the kitchen with the national RIBI Young Chef competition.

more Rotary Youth Leadership Award. RYLA is a leadership development course. It is a rare opportunity to experience and learn things about yourself, about working in a team but more importantly about leading and supervising other people.

more Calling all Young Writers.........Have your keyboard or pen at the ready for the National Rotary Young Writer competition.

back Rotary runs a number of national annual competitions to help Young people develop a range of skills.