Students from The Sir John Colfox Academy win National Final of the Jaguar Land Rover 4×4 in Schools Challenge. The students competed in the National final of a cross curricular challenge offered by Land Rover/ Jaguar 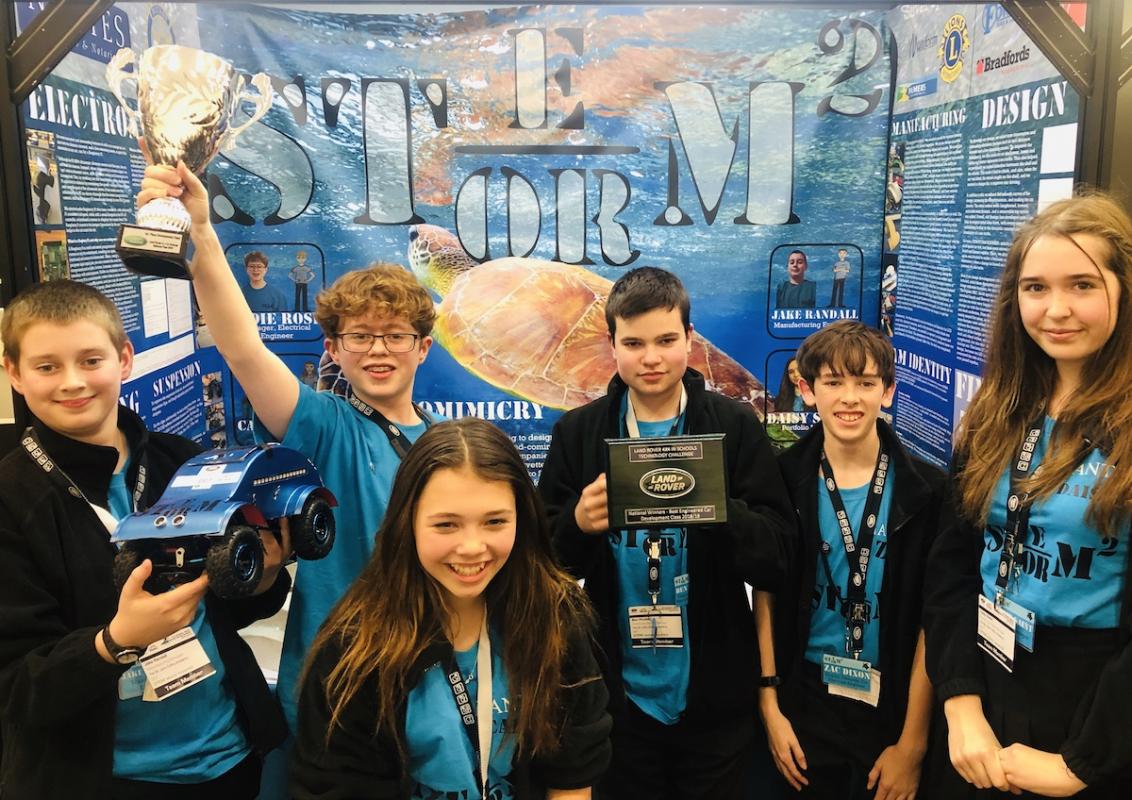 Students at The Sir John Colfox Academy competed in the National final of a cross curricular challenge offered by Land Rover/ Jaguar in a two day event on the 6th & 7th March. It was a STEM challenge which incorporates 4 areas of the curriculum: Science, Technology, Engineering and Maths.

The students competed in Development class of the competition. There are 3 classes; entry level, development and professional class. Development class involved the students designing a shell for a remote controlled 4×4 rock crawler vehicle and engineer electronics for it, complete with automatic lights which come on in the dark and a tilt sensor which sounds when the vehicle tilts past 25 degrees. The vehicle had to be made to very precise specifications and in a limited time frame. This is a challenge in itself but in addition to this students were expected to come up with a team name, complete with team identity and branding. They had to raise all funds themselves for materials and travel/ accommodation, so they could actually attend and compete in the National Final event which took place at The British Motor Museum in Warwickshire. They also needed to create a ten page portfolio of their work, a pit display, a 10 minute verbal presentation and pass a grilling by the judges (Jaguar Land Rover Engineers). They also had to prove their engineering skills worked by driving their car on an obstacle course which went over, in, on and around two brand new Land Rover discovery cars in the best time possible.

Our team were called STEM Storm Squared and was made up of Eddie Rose, Jake Randall, Ben Pimbley, Zac Dixon and Cara Hatch.

Day one saw the team complete their verbal presentation and a Q&A following this with the JLR judges. The next session following on they had their car scrutineered and their engineering judging session.

On day two, STEM Storm squared had their second timed track run. The team rose to the challenge and completed their track run, hitting only a few cones and failing 3 obstacles. This was positive as there were an awful lot of cones and obstacles to negotiate and it’s rare to get a completely clean run. The rest of day two saw them have their pit display interview, complete a coding challenge and have their tow bar tested for strength.

At the end of day two, it was time to hand out the prizes. There were prizes for some of the single aspects e.g. best pit display, best verbal presentation, best team identity, winners of the coding challenge etc.. STEM Storm squared picked up one of these for the best engineered car. Then the prizes for the best overall score were given out. STEM Storm squared won first place in their category! They were over the moon as were their teachers!

The team did phone many companies asking for donations and sponsorship and they also made a plea via social media and the Bridport News for donations through their crowdfunding page. They received an excellent response from the community and would like to thank the following:

Nantes, Bridport Rotary Club who donated £500, Bridport Lions Club, Bradfords Building Supplies, Fowler Hire & Sales, Multiform Technologies Ltd, Palmers Brewery, Footeprints and Colin at Vertiworks. Also, thanks to Keith Hatch for looking into setting up the Crowdfunding page, Abby at Crowdfunder for all your help managing this and thank you to everybody who donated including Dorset youth fund. They would not have finished the project to the standard they did and got to the final without your generosity.

The team are now looking forward to progressing in the project in the next class up; Professional Class. They have the chance to go and watch the professional class teams compete in the international final to gain inspiration for their own professional class project. The team are also keen to mentor new upcoming teams in the competition.

The staff at the Sir John Colfox Academy couldn’t be more proud of these young people and all that they have accomplished. Well done & good luck in Professional class!