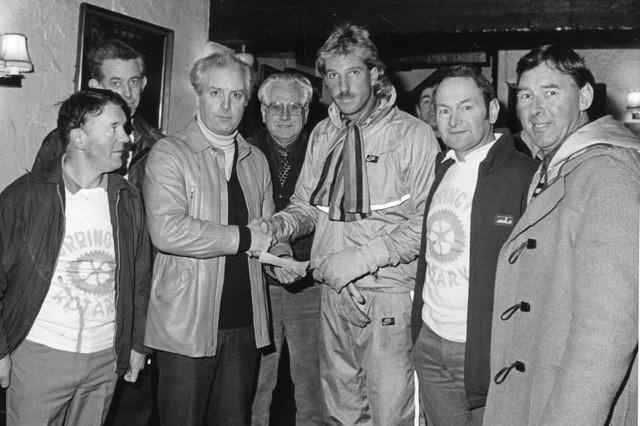 While on a visit to the Musgrove Park Hospital in Taunton for treatment on a broken metatarsal ( toe) Ian Botham wandered innocently through a children's ward. Asking the specialist what was wrong with the children he saw playing board games, he was staggered to hear that they had leukaemia, and that some of them only had weeks to live. "It was shattering news for me," Botham said, "I simply couldn't take in what I was hearing." Giving £50 for the annual party on the ward was a start, yet he knew that more could be done. Over the years, the seed that was planted that day grew and grew as he discovered more about the disease - a cancer which starts in blood-forming tissue - and knew that he could put his public status to good use in raising funds for the cause.

And it was on a walk in Ullswater with his wife Kath that he came up with his John O'Groats to Land's End plan and in April 1985 he announced that he would be tackling the end to end challenge in October/November, and stated : "If we can reach the £100,000 target it will be one of the happiest moments of my life."

The walk was to be from October 26 to November 25, and during the walk he would be accompanied by a whole range of celebrities, because of this the walk received a huge amount of publicity including regular BBC Breakfast Time broadcasts with Frank Bough and Selina Scott, and as a result of this over £110.000 was collected , £10,000 over the original target,  before the Scottish border had been crossed.

As a result of all this publicity it was suggested at one of our Club meetings  ( by George Copp ) that we should take part in the walk , I immediately agreed and soon we had a team of six volunteers and we decided to walk from Okehampton to Launceston. The news soon got out in the town that we were taking part and donations started to roll in. On the day of the walk we presented a cheque for £500 to Ian Botham and in total we collected £1100.

The walk had a carnival atmosphere with over 100 people taking part together with support vehicles etc. the road was thronged with people and as we passed bye they plied us with drinks and refreshments, in Launceston the streets were jammed like Torrington on May Fair day. It was a great experience and gave a focal point to my Presidential year.

Douglas Osborne, the Chief Executive of Leukaemia Research between 1989-2007, stated that the total raised by the Botham walk was over £1.1 million, with the Leukaemia Research telephone line quite literally exploding due to the floods of calls coming in.

PS : During the walk we met Charles and Jane Moore for the first time, their son Johnathan was suffering from Leukaemia at the time and was taking part in the walk, as a result of that meeting Charles was proposed for membership and I was privileged to induct him into our Club.

A Meeting Place for the Over 60's