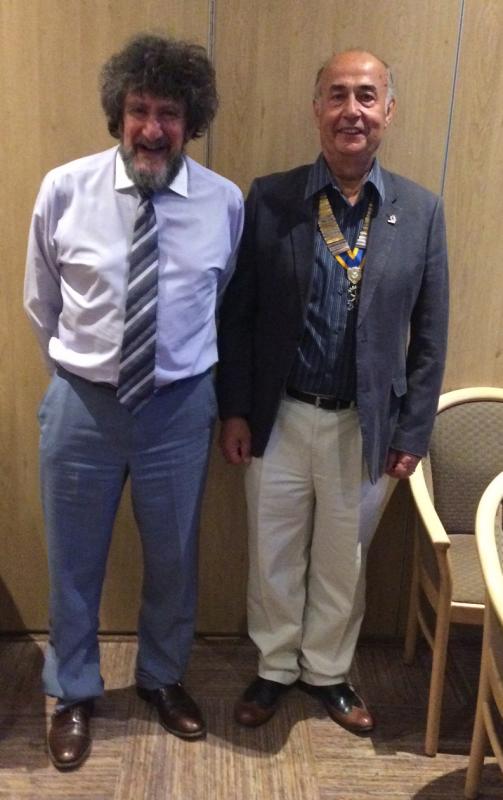 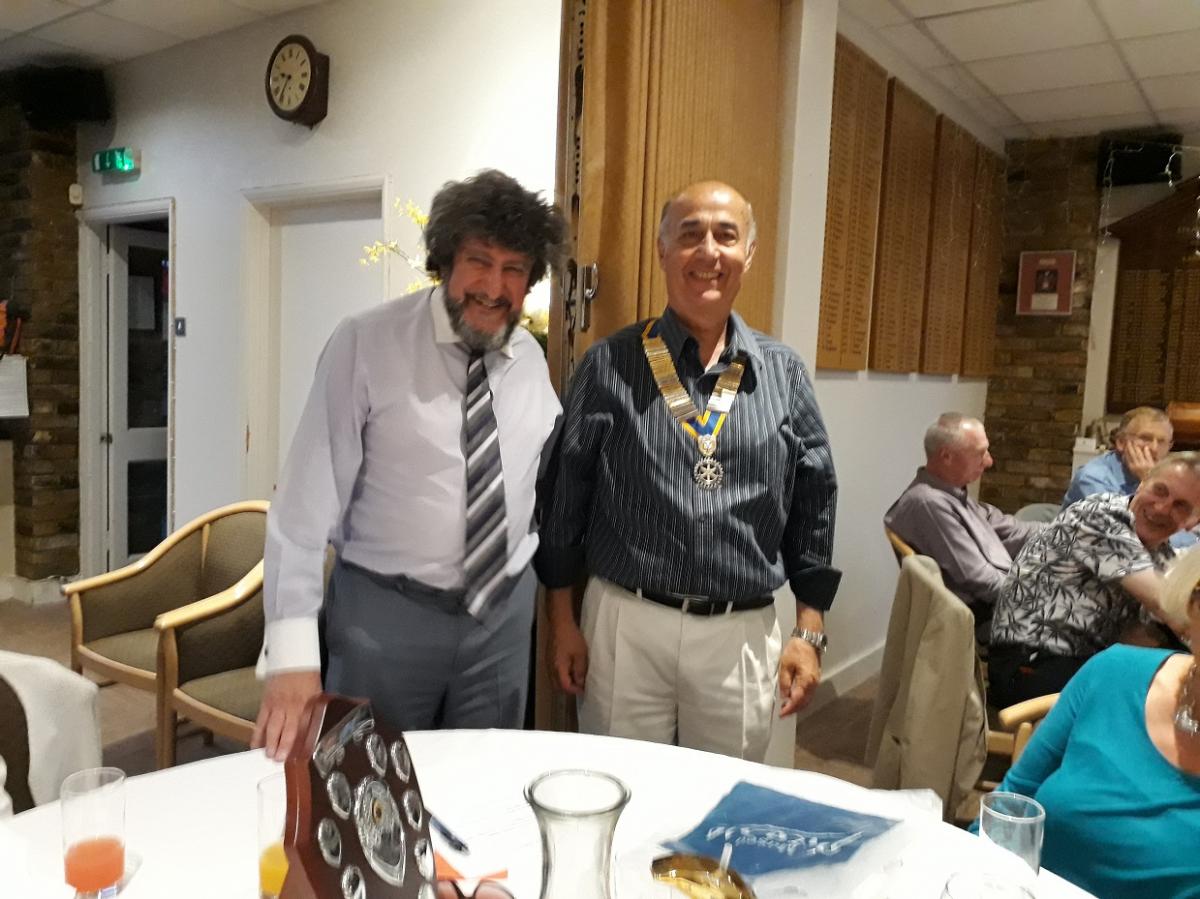 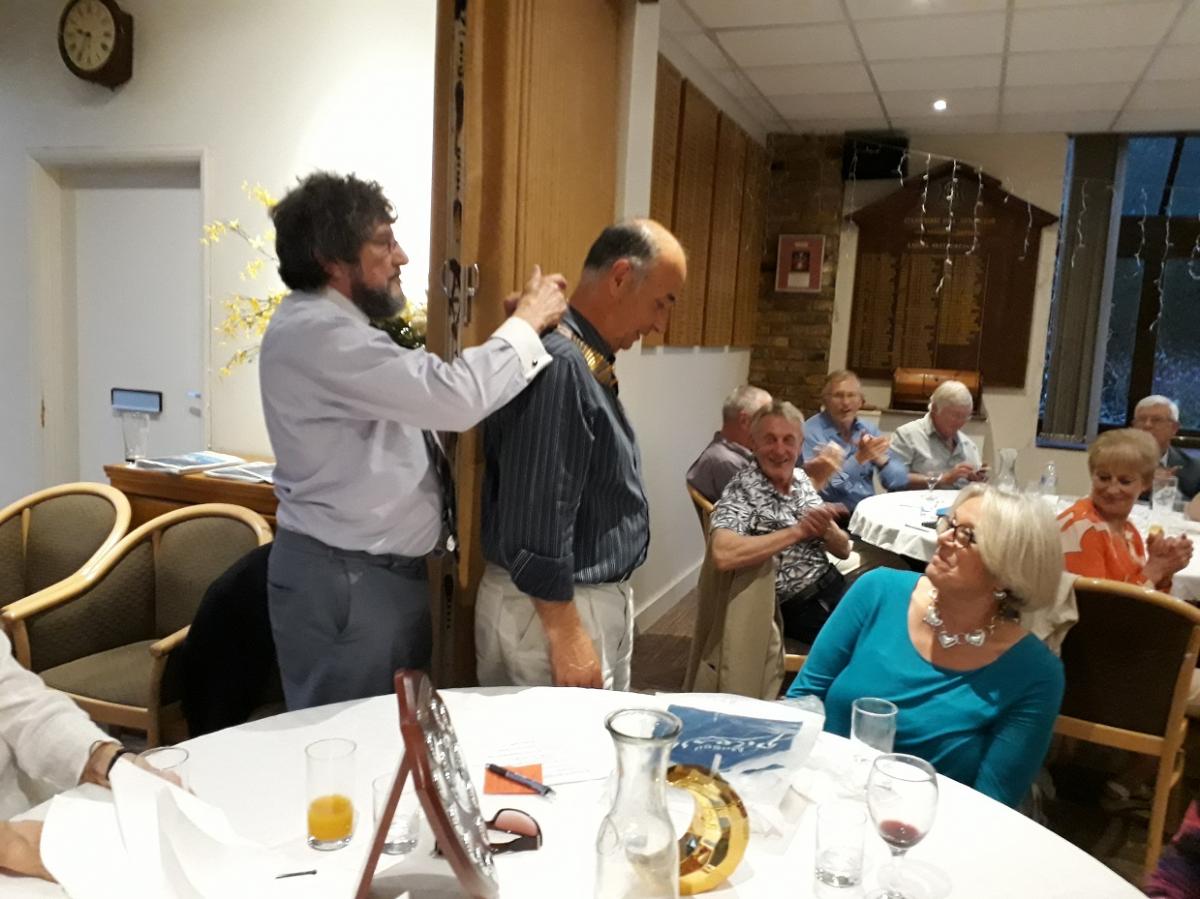 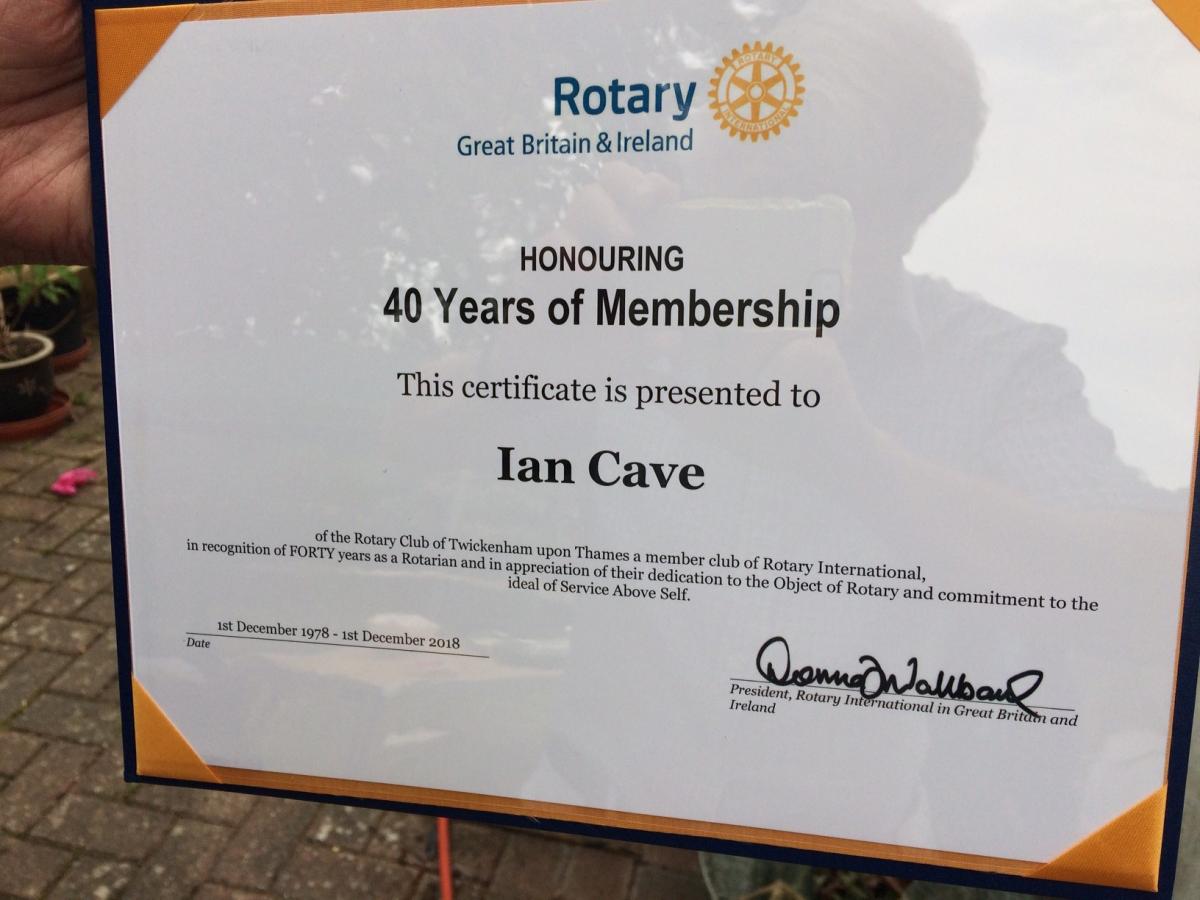 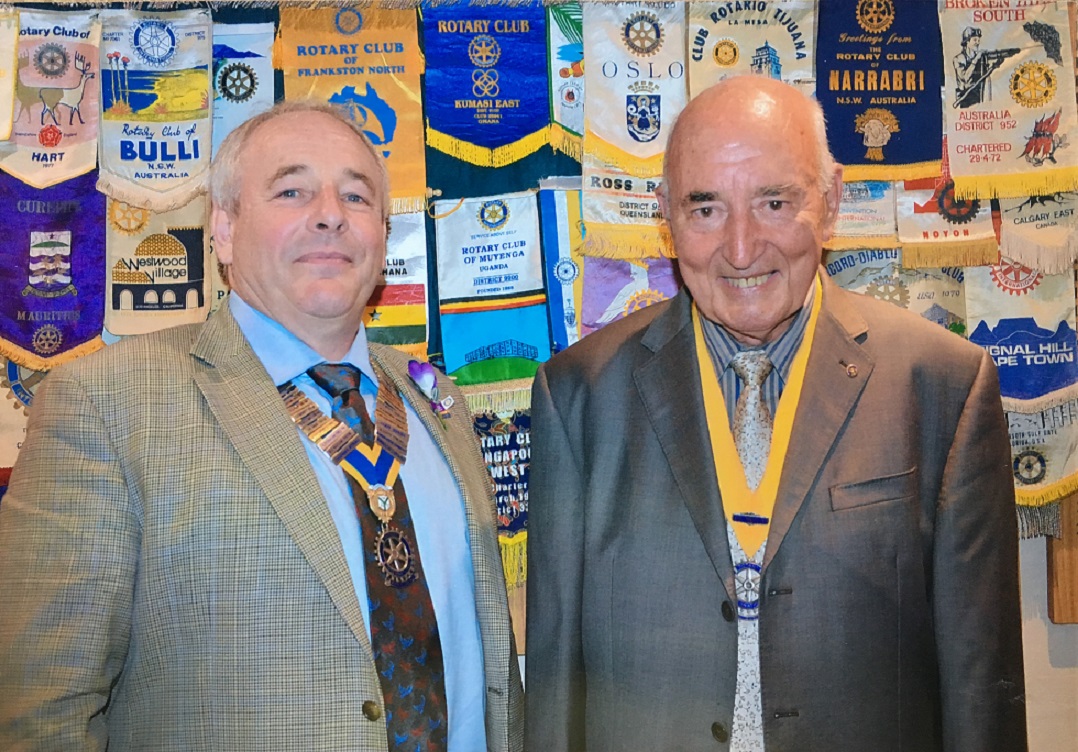 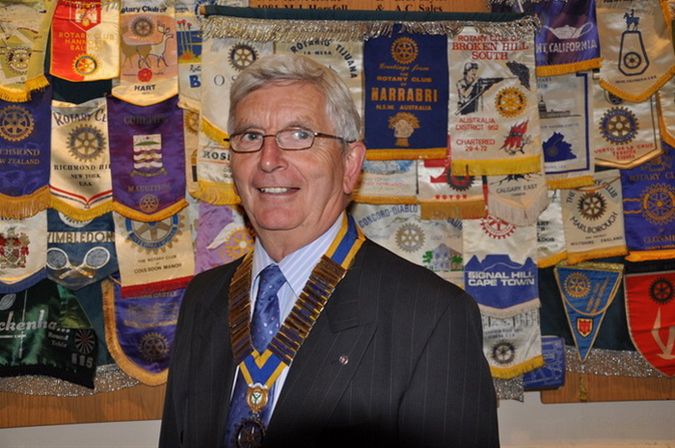 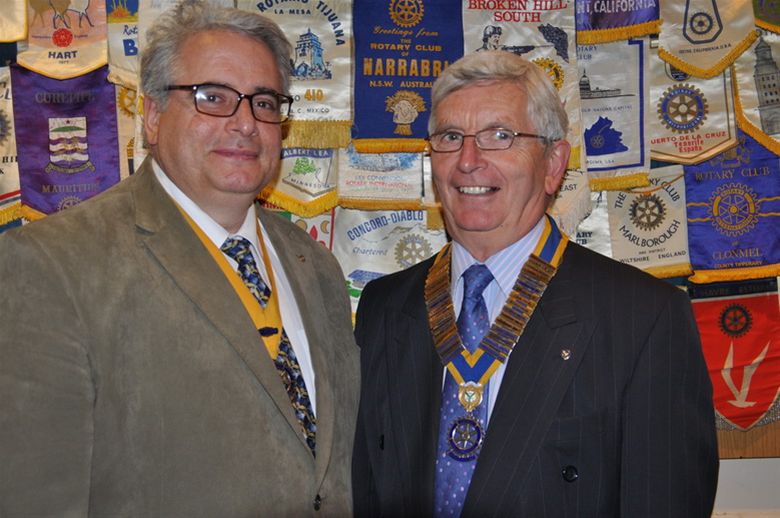 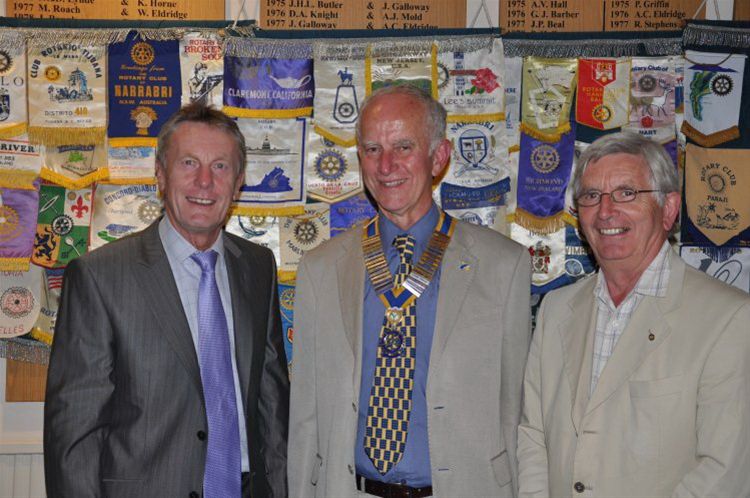 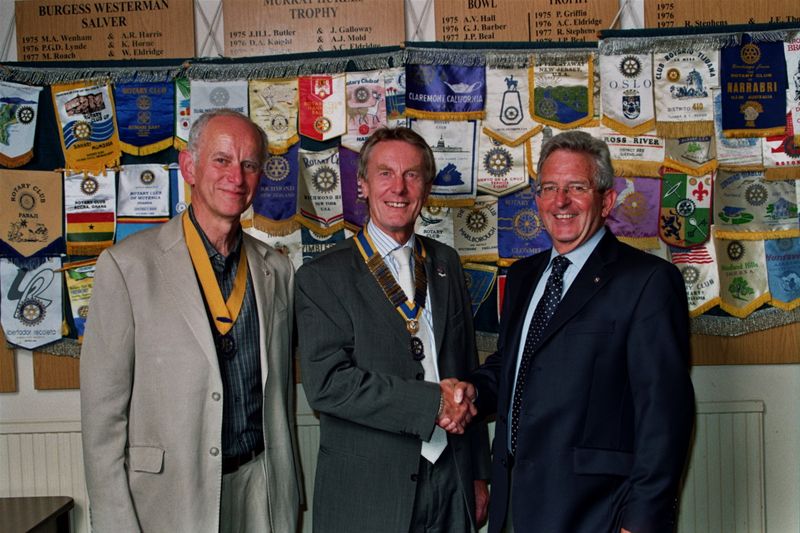 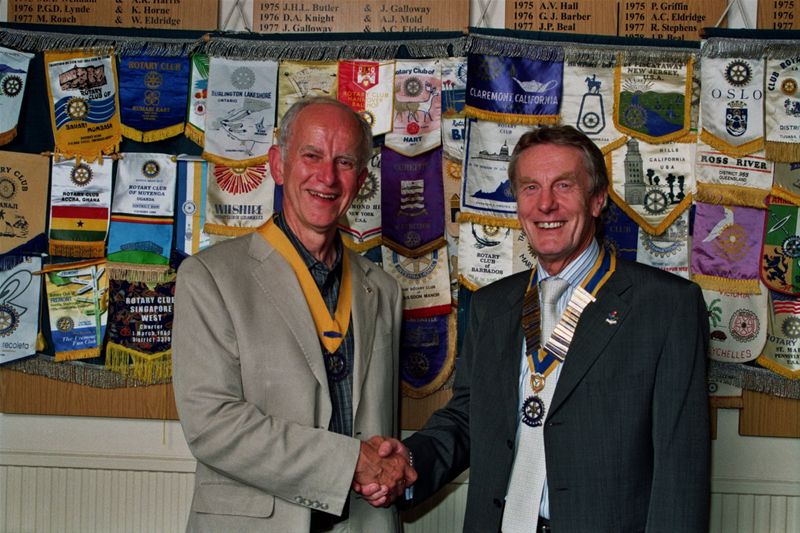 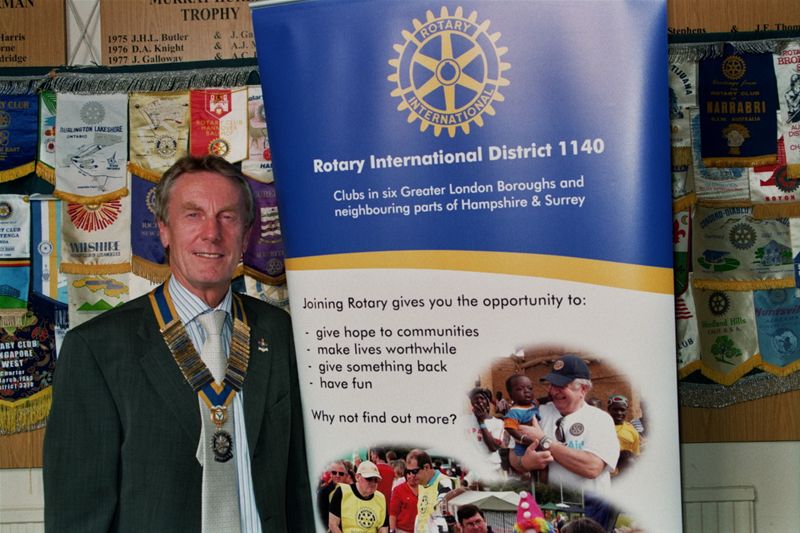 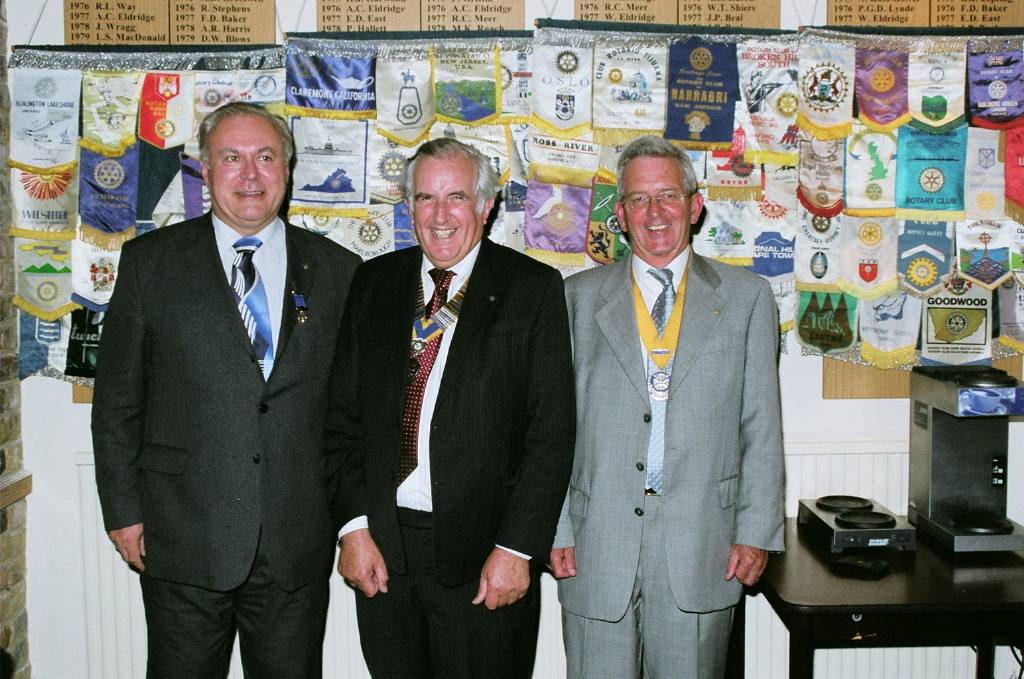 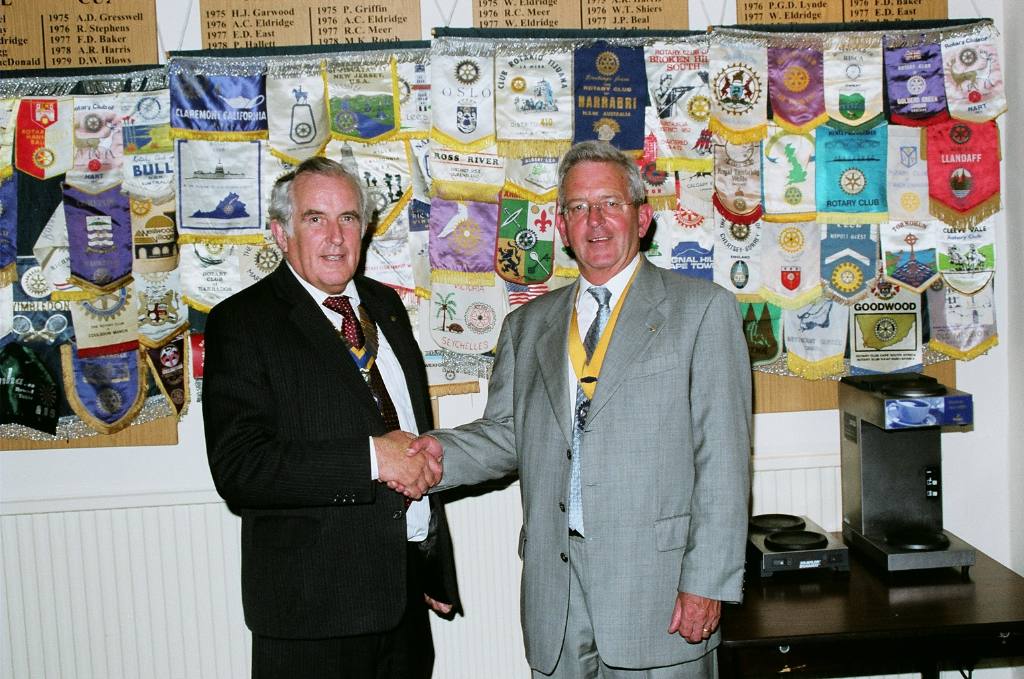 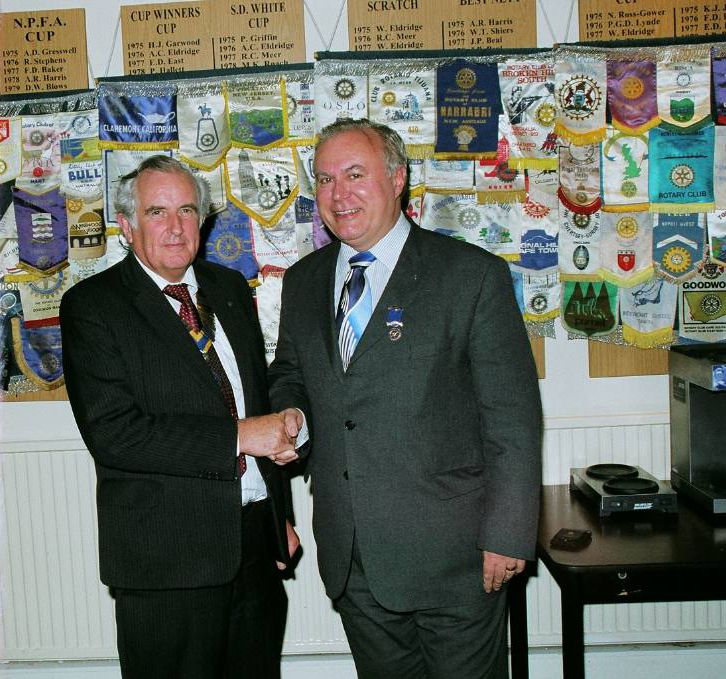 Our Rotary year runs from 1st July to 30th June each year and the first meeting of the year is usually the occasion for the handover from the outgoing President to the incoming one. Usually very informal, including handing over the heavy chain most Presidents wear for formal occasions.  Sometimes a photo is taken to record the event. If a Vice President has also stepped up at this time, there is also a handover from the previous Vice to the new one (sometimes called President Elect).

Note from most recent Handover Event:

The 30th June saw the end of a very successful Rotary Year for the Club, and with it the formal handover by its Club President to his successor for the new Rotary year.

The current president was Ian Cave who has the unique distinction of having been President for three years. The first time in 1984/5 for a year and also for 2017/18 (a role shared with Rtn Mike Kelly),and then 2018/9 following Michael Kelly’s tragic death. 2019 also saw the presentation to Ian Cave of a Certificate from Rotary’s U.K. national organisation -Rotary Great Britain and Ireland- recognising and honouring his 40 year’s membership of our Club.

The new Club President, Alper Ozturk, now will have the distinction of being President twice, firstly in year 2004-5 and now 2019. Since joining the club in 1998 he has worked in the Community, Vocational Service, International, and Fundraising Committees. Alper was born in Bolu, Turkey and came to England in 1967 as a textiles student. Besides successfully completing the graduate and postgraduate courses at Leeds University he also met his future wife Alayne who was studying English at the University. They married in 1977 and have two children. They moved to Adana in Turkey where they lived for several years before returning in 1985. In 1988 Alper became a Senior Lecturer at the South Bank University.

more The objective of Twickenham upon Thames Rotary (TuT Rotary) is to use the time, efforts, skills, knowledge and experience of its 35 members to benefit the local and wider community.

more TuT Rotary Club was formed over forty years ago. Listing everything we've done over the years would be ridiculous, so here we have highlighted one event for each year of existence. Most of these events have their own entries on the website as well.

more We hold Council and Business Meetings most months on behalf of the Twickenham upon Thames Rotary Club. This is how the Committees keeps members of the club abreast of what's going on in their areas. These meetings are always lively and interesting.

more Here you will find a brief description of each of our 5 Committees: Community and Fundraising, International and Foundation, Youth & Vocational, Public Relations and Membership.

more We celebrated forty years since our Charter with a delicious meal, lots of treasured memories and visits from former members 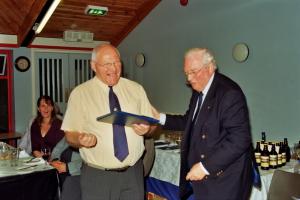 more The original Charter evening in 1978

more Photos of new members at their induction

more Katina studied at St Mary's University in Twickenham in 2016 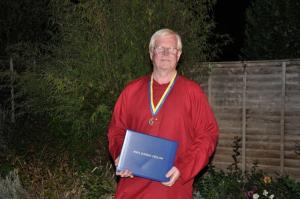 The Rotary Club of Twickenham upon Thames

back What is Twickenham upon Thames Rotary (TuT Rotary)?